HEFEI, China -- At this month's CES extravaganza in Las Vegas, Chinese artificial intelligence company iFlytek for the first time had its own booth at the annual consumer electronics show, where curious crowds checked out its AI translation systems and other technology.

The purpose was clear.

"The time has come for artificial intelligence technology to be used in real life," Liu Qingfeng, chairman of iFlytek, said on Jan. 9 as he unveiled its partnership with U.S. technology company Nvidia. "Given that we have received tie-up proposals from more than 100 companies in the world, the time is ripe for us to look beyond our borders."

IFlytek is China's leading voice recognition tech company, dominating that segment with a more than 70% market share. Still, less than 1% of its sales come from overseas. Now, the company is seeking to change that. 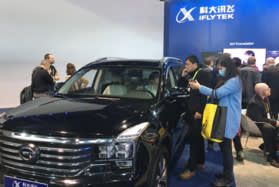 IFlytek began attracting attention outside China last summer after it ranked sixth in the "50 Smartest Companies 2017" list from MIT Technology Review, a magazine published by the Massachusetts Institute of Technology.

The company's ranking was higher than that of China's top three internet companies, Baidu, Alibaba Group Holding and Tencent Holdings, whose market capitalizations -- at  $88 billion, $506 billion and $556 billion, respectively -- dwarf that of iFlytek's market cap of $13 billion.

However, iFlytek's growth is not inferior to its bigger peers. The value of iFlytek more than doubled last year, when the benchmark Shenzhen Composite Index dropped 3.5%. The market still seems to be bullish on its outlook. Eric Qiu and Ronnie Ho, analysts at CCB International, said the company "has headroom for growth as it has carved out a niche in a burgeoning new area of technology that has applicability in a vast array of industries," in a research note that maintained an "outperform" rating with a target price of 66 yuan, 9% higher than the closing price on Thursday.

The appetite for iFlytek among global investors is reflected in the buying spree through the stock-connect program between Hong Kong and Shenzhen, where the company's shares are listed. Hong Kong Securities Clearing is the fifth-largest shareholder, with a 1.32% ownership as of last September, but the latest update by the Hong Kong exchange indicates that the figure is up to 1.5% as of Thursday.

The ambitions of iFlytek, which was founded in 1999, are evident at the company's headquarters in Hefei, Anhui Province.

The lobby displays a sign calling for the development of China's high-tech industry, introduced at the government's "863 Program" in March 1986 and championed by then-leader Deng Xiaoping, who led the country's economic reforms.

"Develop high-technology and realize industrialization," the sign proudly proclaims, a slogan that was originally written with a calligraphy brush by Deng himself. 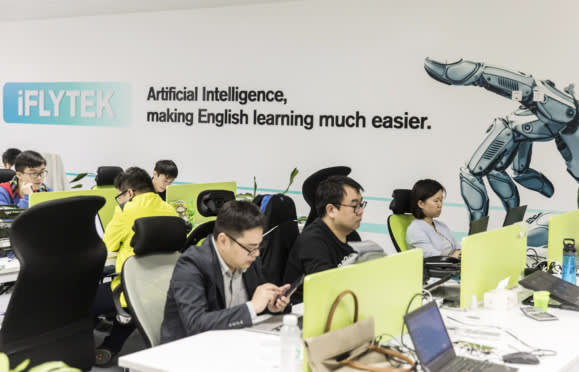 Employees at iFlytek's regional headquarters in Guangzhou. The company has a market share of more than 70% in China in the voice recognition sector.   © Getty Images

The University of Science and Technology of China, founded by the Chinese government in 1958, later became the cradle of iFlytek. The company was founded in 1999 by 18 graduate students and alumni of the university, led by Liu, who was driven by a desire to catch up with, and eventually challenge, U.S. tech powerhouses like IBM and Microsoft.

It was Liu, then a graduate student developing an expertise in voice recognition, who consulted his mentor Professor Wang Renhua to work on his Ph.D. while starting the company.

Wang fully backed Liu, and the professor today is considered to be the "father of iFlytek." Wang also remains the company's fourth-largest shareholder as of September.

Shortly after that, the company was eligible to receive government support under the "863 Program," including 1.5 million yuan ($237,000 at the current exchange rate) of research and development funding, and a boost to its credibility that opened up new business relations with government agencies and corporations.

A prominent example is a deal, struck in 2000, with telecommunications equipment manufacturer Huawei Technologies. IFlytek developed a system for call-center operators, jointly proposed to clients with Huawei. By 2001, the number of corporate clients using iFlytek's voice recognition technology exceeded 100 and it started receiving funds from Lenovo Group's investment unit. IFlytek also has launched a series of joint development projects with universities and research institutes and continued expanding its business.

Guo Moruo, a prominent scholar-cum-politician and the first president of the Chinese Academy of Science, proposed to Deng -- who was heading the Communist Party central committee secretariat -- that the country needed to develop experts in science and technology, including nurturing talent for developing weapons like nuclear bombs and satellites.

The university was established in Beijing in 1958 but was moved out of the capital during the Cultural Revolution, when education, science and intellectual value as a whole were under attack. It eventually found a home in Hefei, an inland city in eastern China.

The university boasts having a number of graduates that have gone on to become scientists or founders of technology companies. Zhang Yaqin, its most prominent graduate, entered the university at age 12, earning bachelor's and master's degrees. (He completed his Ph.D. at George Washington University at 23.) Zhang served as the chairman of Microsoft Asia-Pacific R&D Group and now is president of Baidu. Lenovo Group CEO Yang Yuanqing also studied at USTC's graduate school. 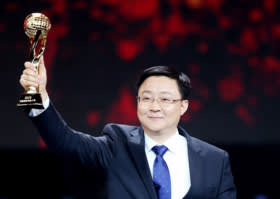 The roughly 3,000 employees at iFlytek's headquarters are a generally youthful group, with an average age of 27, and 60% are engineers who majored in cutting-edge technologies at USTC or other science-focused universities.

The company also has won numerous recognitions. At the 11th International Workshop on Spoken Language Translation in the U.S. in 2014, iFlytek took first place in English-Chinese and Chinese-English translation technology, beating top-level universities and research institutions, including MIT and Japan's National Institute of Information and Communications Technology. It also ranked No. 1 in a machine translation contest hosted by the National Institute of Standards and Technology in the U.S. in 2015.

Most voice recognition services by iFlytek are provided through the internet, and these systems understand text by using AI and big data analysis.

In addition to so-called Standard Chinese, or Mandarin, voice recognition services are now available in regional dialects, including Cantonese and Shanghainese, and the company says it has achieved an accuracy level of more than 95%. The number of smartphone and other devices featuring iFlytek's voice recognition technology has exceeded 1.2 billion.

IFlytek's client list is a virtual line-up of prominent Chinese companies. In addition to internet conglomerates Tencent, Alibaba and JD.com, its telecom customers include China Mobile -- the largest shareholder in iFlytek with a 12.9% stake as of September -- China Unicom and China Telecom, which use iFlytek's technology in their call-center operations. 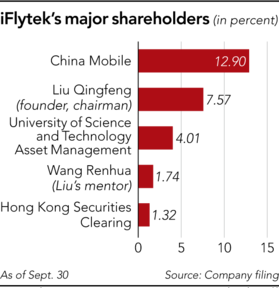 Especially important for artificial intelligence companies, of course, is data, which is crucial in helping them become competitive -- and iFlytek's long client list allows it to access enormous amounts of data. Its healthy collaborative relationships with the Chinese government and the Communist Party help it to further improve its technological strength.

In November, the Chinese government set up a special task force unit to promote its next generation AI development plan and delegated iFlytek to take the lead in the advancement of voice recognition technological applications. The company also set up an industry alliance with the Ministry of Industry and Information Technology to support AI-related startups.

According to Chinese media, iFlytek has been using AI in criminal investigations, indictments and trials by working with more than 400 courts and 200 prosecutor's offices around China. Artificial intelligence has been used in language analysis in Sichuan Province, the Tibet Autonomous Region and the Xinjiang Uighur Autonomous Region.

That use of artificial intelligence -- and its potential abuse -- has led to warnings from rights and privacy activists.

Human Rights Watch raised concerns of iFlytek's possible involvement in human rights violations by the Chinese government. The U.S.-based organization points out that the authorities in China have teamed up with the company in developing a "pilot surveillance system that can automatically identify targeted voices in phone conversations."

In an open letter dated Aug. 2 and addressed to Chairman Liu of iFlytek, Arvind Ganesan, director of Human Rights Watch's business and human rights division, requested details of the company's "mass automated voice recognition and monitoring system," a pilot system to monitor phone conversations, its "business relationship" with the Ministry of Public Security and its human rights policies, among other things. In an October report, Human Rights Watch said iFlytek had not responded. Liu is a member of the National People's Congress, a rubber stamp legislature but one that carries certain prestige and influence in the country.

Speaking with the Nikkei Asian Review at the CES event, Hu Yu, iFlytek's executive president, acknowledged its work with the government.

"As a Chinese company, one of our customers is [the] Chinese government," Hu said, adding that the company "cannot decide" on how its technology is used. "Apple also sells its products to [the] U.S. military," he said.

"What we can do is to provide our technology," Hu said. "Our customers will decide how to do that. We have some relationship with them in national projects, but we are not in charge of that."

IFlytek's overseas businesses have long focused mainly on research and development, investing about 25% of sales in R&D. In 2016, it opened an office in Silicon Valley. It also started a joint study with the Georgia Institute of Technology, though the details are not fully disclosed.

In the auto industry, iFlytek has formed partnerships with German automakers Daimler, BMW and Volkswagen, as well as Toyota Motor of Japan, but these deals are primarily for car navigation systems for vehicles sold in China. It now is considering seeking tie-ups for systems in cars sold globally.

The company's presence in China is evident, but it is a different story outside the country. Google, Microsoft and Apple are the global leaders in voice recognition technology, while iFlytek's market share has yet to reach double digits.

Unlike at home, iFlytek is not able to receive any preferential support and treatment from foreign governments. In addition, many overseas clients remain cautious about Chinese companies.

At iFlytek's headquarters in Hefei, another sign is displayed prominently: "Let the world hear our voices."

That is another slogan placed at the building's entrance, in addition to Deng's. Whether those voices are heard abroad will be the real test of iFlytek's strength.