Chinese developer Evergrande tightens belt after a decade of audacity

HONG KONG -- When Xia Haijun stood with a beaming Donald Trump for a photo op in 2008 after clinching a multimillion-dollar property deal, the chief executive of China Evergrande Group never imagined that 10 years later his company would appear on the now-U.S. president's blacklist.

Evergrande, China's third-largest property developer by sales, has been accused by the Trump administration of stealing American technology and intellectual property after it agreed to acquire a small electric-vehicle startup last year.

The allegation not only highlights how the relationship between the U.S. and China has deteriorated, but also how much the residential property company has changed as a decade of heady growth comes to an end.

With one of the highest debt levels among Chinese developers, Evergrande has realized that its old formula for success -- described by the company as "high debt, high leverage, high turnover and low cost" -- is less effective as Beijing's clampdown on excess corporate debt has tightened credit.

After years of rapid growth, Evergrande's expansion plans are now increasingly challenged by rising financing costs, a slowing domestic economy and a lackluster property market. The company is scrambling to find new sources of growth, while being forced to fund its core property business at extraordinarily high cost. Analysts say that Evergrande's recent multibillion-dollar bond offerings at unusually high rates of up to 13.75% underscore the mounting financial pressures. The decision by the company's billionaire chairman, Xu Jiayin, to subscribe to more than $1 billion of the bonds was designed to steady investor confidence as the property market spiraled downward earlier this year.

"Evergrande does face some refinancing risks, with the company needing to deal with almost 300 billion yuan ($43.4 billion) of debt next year," said Matthew Chow, an analyst at S&P Global Ratings.

That wall of debt repayment prompted the ratings agency to warn this year that the company had a "less than adequate" liquidity level. S&P noted that Evergrande's liquidity profile remained weaker than its peers of similar scale or rating.

The debt was built over a decade, to fund a program of aggressive land purchases as Chinese property prices smashed records year in, year out. Net debt over total assets rose from 23.8% in 2008 to 183.7% in 2017, while property prices in Beijing tripled during the period.

But as China's property market began to cool earlier this year, Evergrande realized it needed to do more to address its debt burden. In 2017 it had raised 130 billion yuan ($18.85 billion) from the sale of a stake in unlisted Hengda Real Estate Group, to strategic investors. But from the start of this year it began slowing down land purchases and used the cash from sales to reduce debt further. Its gearing ratio, or net debt to total equity, fell from 183.7% at end of 2017 to 127.3% in the first six months of this year.

Yet that figure is still well above the level of China's two top developers, Country Garden Holdings at 59% and China Vanke at 32.7%. Moreover it still has 671.1 billion yuan in outstanding gross debt, of which 44.5% comes due in mid-2019. 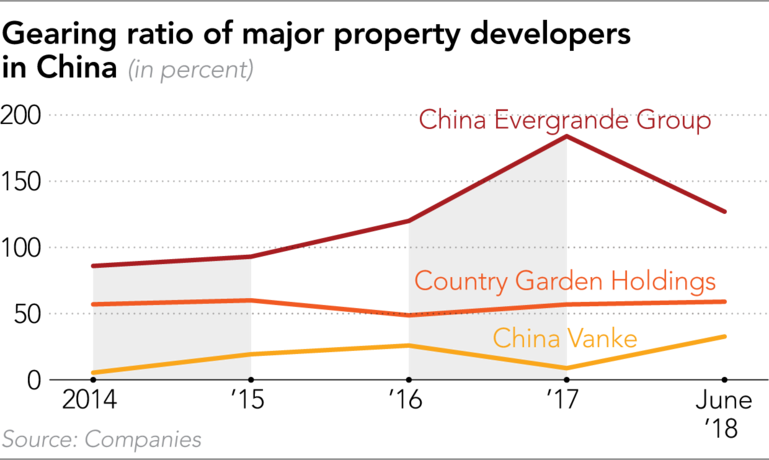 "It's a good sign that Evergrande is making an effort to bring down its debt," but it is not enough to convince investors that its balance sheet is healthy, said Alan Jin, head of property research for Asia, excluding Japan, at Mizuho Securities.

Even as the company's debt rose, so too did the personal wealth of Xu Jiayin, Evergrande's chairman and founder. The 60-year-old is mainland China's richest real estate executive, with assets estimated at 215 billion yuan, according to this year's Hurun Report, which tracks the country's wealthiest people.

The former boss of a state-owned steel factory in central Henan Province founded Evergrande in 1996, not long after he had relocated to Shenzhen, which borders Hong Kong and was the epicenter of China's economic reforms.

Within 10 years, Xu had turned the group into one of the largest property companies in southern China by aggressively acquiring land and launching new projects.

He became the country's richest man after listing Evergrande on the Hong Kong stock exchange in 2009. That listing and the access to capital it brought, helped Evergrande to further expand its empire as household incomes rose on the wave of urbanization that swept China in the new millennium.

Evergrande's sales surpassed the 100 billion yuan for the first time in 2014, and the company rose to become China's largest developer by sales in 2016. Competitors were catching up fast, however, benefiting from the same trends that drove Evergrande. A year later it had fallen to third place, although it still notched up 500.1 billion yuan in sales. 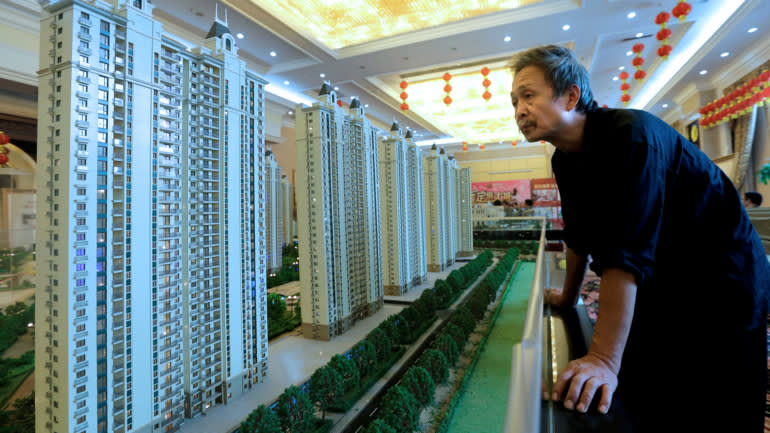 A visitor looks at a model of a new apartment complex at a showroom of Evergrande Real Estate Group in Wuhan, Hubei Province.   © Reuters

Roughly 98% of Evergrande's business is in residential property development, which has been one of the most lucrative businesses in China as the populations of its main cities exploded. Beijing, Shanghai and Shenzhen are among the world's top 10 most expensive cities in terms of housing affordability, according to a survey this year by Numbeo, an online database operator that specializes in tracking consumer prices.

But earlier this year, the winds began to shift. China's booming property market has begun to slow as the trade dispute with the U.S. has hit consumer confidence. Analysts and economists expect the volume of home sales to drop by up to 10% in 2019, and some developers have started slashing prices as much as 30% to speed up sales and pay down their debts.

"For the first time since listing, China Evergrande's balance sheet did not expand dramatically," Jin said, referring to the first half of 2018. Its total assets during the six-month period rose 18.5%, compared with increases of 49.3% in 2017 and 85.2% in 2016 for the same period.

Jin said the figures are more a reflection of its past strength, as it typically takes one to two years for sales revenue to be reflected on developers' balance sheets. Its land bank, a more forward-looking indicator of a developer's ability to sell in the future, declined 2% in the first half compared with the end of last year.

Evergrande's sales growth has also slowed. For the first 11 months of this year, year-on-year contract sales rose 13.8%, compared with full-year growth of 34.2% last year. But in November contract sales actually fell -- down 29.1% in the month on a year earlier. The shrinking revenue stream has weighed on Evergrande's ability to pay down debts, Jin said. As well as the surprise bond issue, the company is looking at other ways to raise funds. It plans to list Hengda Real Estate on the Shenzhen Stock Exchange as part of the agreement with investors who invested 130 billion yuan last year. Evergrande has a commitment to buy back their shares if it fails to float the business by January 2020. It is in talks with market regulators about a detailed listing plan.

The commitment to buy back the shares is seen as one of the biggest risks facing the company in the short term. There are concerns that Chinese authorities may not be keen to see a listing -- and a revitalized property developer with a large war chest -- as it tries to clamp down on runaway property prices.

"The government's stance to suppress property prices is very clear," said Wang Dan, a Beijing-based analyst with the Economist Intelligence Unit. The government will not lift restrictions, which include price caps and a ban on multiple home purchases, anytime soon despite the economic slowdown, she said.

Given the difficulties in property, Evergrande has been seeking alternative engines of future growth. Yet some analysts argue that the challenges are even greater to find a profitable business model beyond what Evergrande knows best.

The company has placed its bets on a range of sectors, from next-generation research to automotive technology and even cinemas. The strategy has not always paid off.

Then, in November, as the U.S. and China exchanged salvos in the mounting trade war, the Trump administration cited Evergrande's investment in Faraday is an "illustrative example" of how Chinese companies were deployed by Beijing to obtain cutting-edge technology and intellectual property.

Evergrande says its investment in Faraday -- which was approved by U.S. authorities -- was a "purely commercial decision." Nevertheless, the outcry is a blow to its reputation as it seeks to diversify its revenue base.

In addition to Faraday, Evergrande spent 14.5 billion yuan in September for a 41% stake in BMW distributor Guanghui Group. It has also struck a deal with the China Academy of Sciences to invest 100 billion yuan in technology research over the next 10 years.

This scattershot investment strategy has puzzled many analysts and investors. "I don't think the new businesses provide any help to Evergrande's earnings, and the risks are very high," said Danielle Wang, a China property analyst at DBS Vickers. 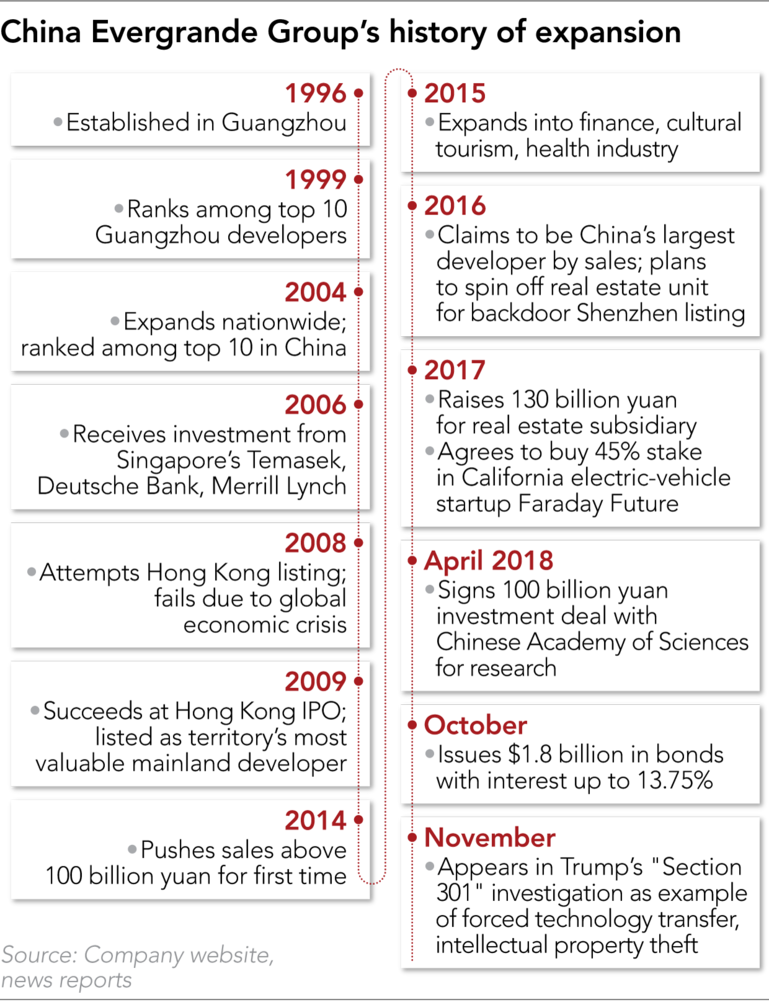 Evergrande, like many Chinese property developers who are pushing for diversified portfolios, lacks the expertise required to distinguish promising technologies from the bad ones, she said.

Jin of Mizuho Securities said Evergrande's aggressive investments in sectors other than property reflects the anxiety shared by other developers facing a souring property market.

However, many believe that Beijing would never allow the current property slowdown to become a crisis. The sector is simply "too important to the overall economy," said Lee Wee Liat, head of property research at BNP Paribas.

"When the overall economy gets worse, property market conditions will actually get better," he said.

Relaxing restrictions on property has been a vital tool for Beijing to pump up the economy. There is plenty of scope to do this, say analysts, given the serial crackdowns that have been imposed in the past two years. At least two cities have begun a tentative loosening by ending bans on apartment sales, according to media reports. However, this is seen more as a stabilization measure rather than a radical lifting of constraints.

Once more significant policy incentives kick in, big developers such as Evergrande could benefit from a new wave of bank credit, backed by the huge assets it built up in the early days of growth. In short, Evergrande's size may be its saving grace. "Being big is very important in China," Lee said.