The world's most important chipmaker has managed to walk a fine line between China and the U.S., but that will become increasingly difficult as time goes by. (Nikkei Montage/Reuters)
Business Spotlight

Chip titan TSMC caught in crossfire between US and China

TAINAN, Taiwan -- Not even the coronavirus pandemic is stopping the vast expansion plans of Taiwan Semiconductor Manufacturing Co.

In the southern Taiwanese city of Tainan, in tropical sunshine, trucks, excavators and concrete mixers form an endless procession on a 42-hectare construction site, known to the chipmaker as Plant 18. "This will turn into the world's most cutting-edge chip factories. ... It is the largest project our company has ever participated in," an engineer from Fu Tsu Construction, TSMC's construction partner since 1990, told the Nikkei Asian Review.

Plant 18 is where TSMC will soon turn out 5-nanometer chips, the most advanced semiconductors so far, for the next generation of iPhone processor. Later, even smaller 3-nm chips will also be made here. It is part of the company's $40 billion multiyear investment plan -- evidence of the huge price of competing to build ever-faster chips for 5G networks and artificial intelligence.

And on Friday TSMC announced what may come to be one of its most important investments -- a $12 billion, 5-nm wafer plant in the U.S. state of Arizona, where construction will start in 2021 and production is targeted to begin in 2024.

"This project is of critical, strategic importance to a vibrant and competitive U.S. semiconductor ecosystem," TSMC said in a statement.

TSMC is the world's dominant foundry chipmaker -- one that makes chips for other tech groups such as Apple, rather than being sold under the company's own brand. But the challenges are multiplying. Across the Taiwan Strait, China is putting its financial and political muscle behind its chipmakers. Meanwhile, Samsung Electronics, the world's biggest memory chipmaker, is desperate to erode TSMC's foundry market share of more than 50% of global sales.

TSMC is used to commercial battles. Founded in 1987 by Morris Chang, it has grown into a semiconductor giant, with a market capitalization of more than $255 billion and most of the world's biggest tech groups as customers. The company generated 1.06 trillion New Taiwan dollars ($35.2 billion) in revenue and NT$345.26 billion in net income in 2019.

But this dominance in a sector vital to the modern economy has put TSMC in the crosshairs on a battlefield where it has less experience: geopolitics.

Exactly one year ago, U.S. President Donald Trump placed Huawei Technologies, the Chinese telecom equipment provider that has become a top TSMC customer, on the so-called Entity List, restricting its access to American technologies over security concerns. Trump's decision sucked the Taiwanese chipmaker deeper into an issue it would rather avoid: how to straddle the growing U.S.- China tech divide.

On May 13, Trump renewed an executive order for another year to ban American carriers from buying Chinese-made telecom gear, including from Huawei and ZTE.

Mark Li, a veteran semiconductor analyst with Bernstein Research, says TSMC's "critical and significant market position has created some geopolitical headaches that the company has not been used to dealing with during the past decades."

TSMC has vital interests in the U.S., which is home to customers including Apple, Qualcomm, Nvidia, Intel and Advanced Micro Devices. It produces chips for almost all the world's electronics, from iPhones to Google data centers. Its reach extends into the U.S. military -- TSMC produces programmable chips for Xilinx for use in U.S. F-35 fighter jets, as revealed in research by Taiwan's Institute for National Defense and Security Research. 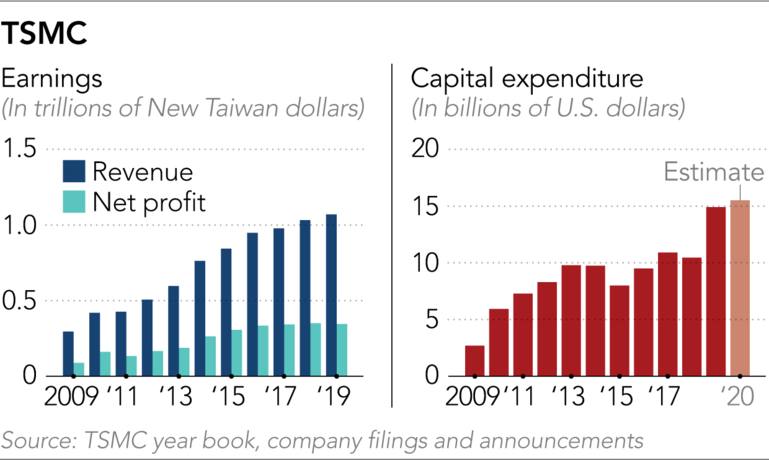 Mainly because of this involvement, the U.S. had stepped up pressure on TSMC to build secured chips for military use on American soil, as Nikkei reported in January. TSMC Chairman Mark Liu confirmed in April that his company was "actively" evaluating whether to build another plant in the U.S. (it has one in Washington state dating back to 1998).

"TSMC welcomes continued strong partnership with the U.S. administration and the State of Arizona on this project," TSMC said as it announced its planned Arizona plant on Friday.

But TSMC also has an important relationship with Huawei. TSMC is a lifeline for China's biggest tech company, especially now amid Washington's clampdown; few other foundries can produce the advanced chips Huawei needs.

Huawei, in turn, has emerged as TSMC's fastest-growing and second-largest customer, behind Apple, accounting for more than 15% of revenue and eager to test cutting-edge technology.

"If TSMC suddenly could not produce any chips to Huawei ... it would be a blow for Huawei," a chip industry executive familiar with the matter told Nikkei. "[But] TSMC will take a hit too, as it really needs more customers to test out the latest production technologies that are so expensive." Only a few deep-pocketed companies, Apple and Huawei among them, can and will do that, the executive said. But this relationship is a vulnerability. Trump administration officials are considering further export controls against Huawei. Options include asking Huawei's non-U.S. suppliers, such as TSMC, to apply for licenses if using American equipment to build products for Huawei.

In an echo of Washington's pressure on TSMC to build highly secured chips in the U.S., Huawei has also asked TSMC several times to allocate more production to China. In what would be an attempt to circumvent the U.S. blacklisting, it has even asked TSMC to look at setting up a production line free of U.S. tools and technologies in the chipmaker's factory in the Chinese city of Nanjing, multiple sources told Nikkei.

While that ambition remains, it is not likely to materialize at the moment as American chip equipment suppliers still dominate the market.

TSMC last year hired additional U.S. trade lawyers to help it with U.S. export control compliance, a company spokesperson said, adding that the company has long had a "complicated export control compliance system." At that time, TSMC concluded that its trading with Huawei was not restricted by the U.S. blacklist. However, since the end of 2019, TSMC has been prepared for changes that could affect its business with Huawei, sources close to the company said. Chairman Liu in mid-April said his company is aware of some draft U.S. rule changes regarding Huawei and admitted some "near-term impact" if regulations are tightened, but said the chipmaker would "take appropriate measures to minimize the impact."

"TSMC is really becoming a crucial strategic resource that all industry players and even countries want to secure. China wants to secure its advanced chip supplies as well as the U.S.," said Arisa Liu, an analyst with the Taiwan Institute of Economic Research. "Its technology leadership gives it some advantages. But it's very true that it would constantly feel pressure when the world's two big economic powers are wrestling with each other for tech supremacy. It needs a lot of wisdom to strike a balance between the two big countries."

In recent weeks the pressure on TSMC has increased. On April 27, the U.S. Commerce Department introduced new rules to keep American technologies from being put to military-related uses in China.

The regulation -- which will take effect by the end of June -- will cover a range of semiconductor-related items from chip design software and advanced chips to chipmaking equipment and materials.

The restriction could create extra geopolitical risks for non-U.S. chip companies -- TSMC and many others -- that will need to make sure their customers have no businesses related to the People's Liberation Army, legal experts say.

"It will be important for Asian contract chipmakers and others to carefully evaluate whether the transferred item is destined for a military end-use or end-user," Harry Clark, managing partner of Orrick, a U.S. law firm, told Nikkei. Then there is TSMC's concentration in Taiwan. Plant 18 will be part of a cluster of advanced chip plants and a complete supply chain on the island -- a source of production efficiency. But what has been an economic strength may become a vulnerability, given today's geopolitics.

There is not only the long-standing Chinese claim on Taiwan, the self-ruled democratic island that Beijing considers one of its provinces. The global coronavirus pandemic has also prompted many countries and multinational companies to rethink supply chain sustainability.

"The pandemic crisis shows how widespread the brittleness of global supply chains is," said Martijn Rasser, a senior fellow of tech and national security at the Center for a New American Security. "I expect the desire for geographic diversification of state-of-the-art semiconductor fabrication to grow in the wake of this crisis."

Taiwan's government is keenly aware that if TSMC were to move production sites it could weaken the island's security position, analysts say. The island's chip industry is the second-largest by revenue after the U.S. For many analysts, those factories and their role in the global economy act as an insurance policy for the island.

"The Taiwanese government will definitely hope TSMC keeps its most cutting-edge factories all in Taiwan," said Su Tzu-yun, director of the Institute for National Defense Security Research in Taipei. "That could make Taiwan a safer place. No one would want to damage TSMC's advanced chip production capacities, which are the hearts of many electronic devices." 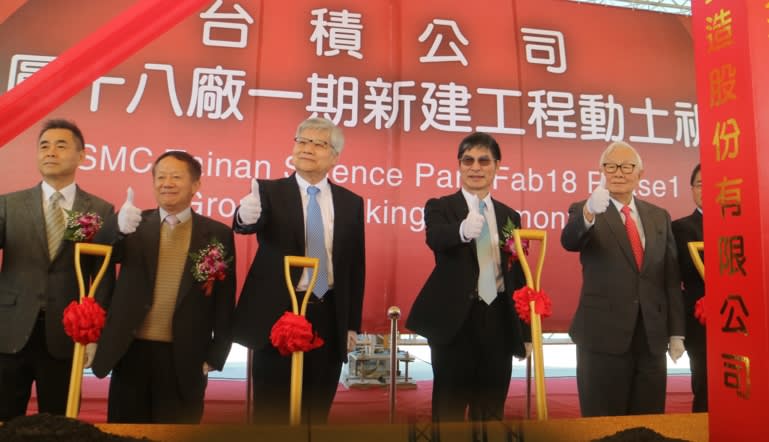 Said another industry veteran, "TSMC's plants could be the world's most safe place if there is a war."

Taiwan's limited land, electricity and water resources will also force TSMC to evaluate overseas sites for plants, a source close to the chipmaker said. "After all, TSMC needs to find another place for the company's long-term production sustainability and growth."

Nor can the chipmaker ignore any rethinking of supply chain diversification and security in the post-coronavirus era -- even though Taiwan has contained the coronavirus outbreak, with only seven deaths and more than 30 days of zero local cases.

Eric Chen, a semiconductor analyst and managing partner of Cornucopia Capital Partner, said TSMC's technology leadership and portfolio of customers could help it. But "as a single enterprise, it still has very limited capability to change geopolitical tensions that many companies will together face," Chen said.

"Post-coronavirus, security will be a crucial issue for many countries: national security and supply chain security. ... The global pandemic will definitely trigger some diversification for essential components," said Su from the Institute for National Defense Security Research.

Looking forward, Su said the U.S. will be eager to upgrade military and defense-use chips for advanced weapons to remain the world's superpower. TSMC's capability would make it the U.S.'s top choice, he said.

"We don't think the tension and competition between the U.S. and China will end any time soon," Su said. "As a crucial supplier, TSMC may still face a tough issue later -- choosing sides."

The security researcher added that "it could be quite difficult in the long term to keep walking a fine line between the two sides."