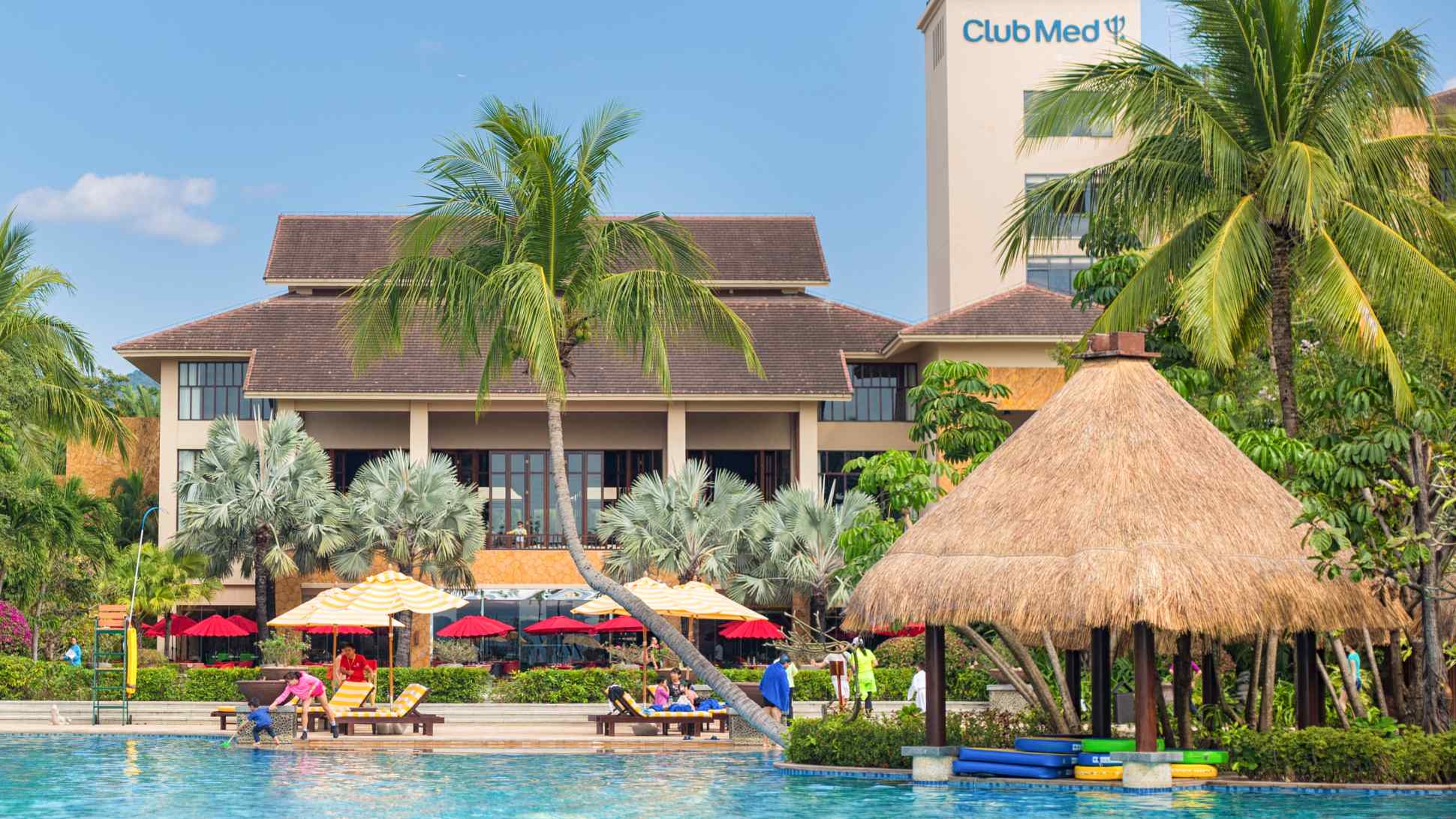 TOKYO/SINGAPORE -- When Li Jingjie needs a break from her job as an editorial director in Shanghai, one of her favorite getaways is just a three-hour drive away: Club Med.

At the foot of the Lingfeng Peaks in Zhejiang Province, nestled in bamboo forests, lies the Club Med Joyview Anji Resort. During the day, Li can ride horses, relax over tea in the "Zen Zone" or hit the archery range. At night, she can mingle with other guests at parties.

"The one-price, all-inclusive concept makes you fully enjoy the holiday," the 33-year-old Li said, adding that the convenience is ideal for busy people and "cannot be found at other hotels."

Fosun Tourism Group, the Chinese company that owns the France-based Club Med, is betting millions of other Chinese vacationers will agree.

Created in 2016, the listed travel arm of conglomerate Fosun International is becoming a global empire in its own right. Besides the Club Med franchise -- once described as a "purveyor of packaged hedonism" in The New York Times, but now a more family-friendly chain -- it owns a leading 18% stake in 178-year-old British travel company Thomas Cook and is negotiating to buy its tour operator business.

On its own, Fosun Tourism developed and owns the $1.6 billion Atlantis resort in Sanya on the southern Chinese island of Hainan. 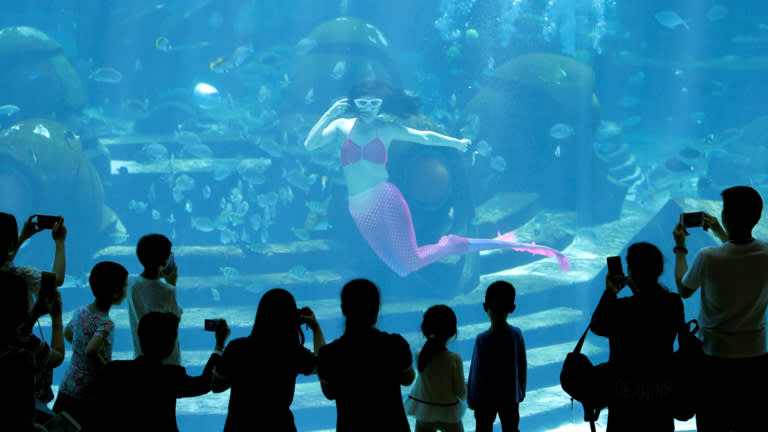 The world has come to expect such ambitious moves from the Fosun group, which holds interests in everything from pharmaceuticals to fashion and financial services and is chaired by Guo Guangchang, a billionaire regarded as China's Warren Buffett. The conglomerate has been in the news for its pursuit of German drug giant Bayer's animal health unit, which is expected to go for 8 billion euros ($9.1 billion).

The question for Fosun Tourism is whether it can use its assets to capitalize on booming Chinese tourism demand. Despite promising signs, there are critics.

Fosun's 939 million euros ($1.1 billion) takeover of Club Med was years in the making. In 2010, before the conglomerate formed Fosun Tourism, it acquired 7.1% of the French resort operator. In 2015, after a two-year bidding war, it raised its Club Med stake to 98% and took the company private.

The acquisition coincided with other high-profile gambles the same year. Fosun purchased its first 5% stake in Thomas Cook for $140 million. It also acquired Cirque du Soleil, the Canadian circus company, for $375 million with investment firm TPG. The string of deals, followed in 2016 by Shanghai travel giant Ctrip.com International's roughly $1.7 billion purchase of Scottish flight aggregator Skyscanner, sparked nervous chatter about a "Chinese takeover" of the industry.

Club Med, in particular, was a European institution dating back to 1950, when a Belgian entrepreneur set up a colony of tents on the Mediterranean island of Mallorca. By 2015, when Fosun acquired it, the company had evolved away from the vibe that inspired the Serge Gainsbourg song "Sea, Sex and Sun," but it was still an icon. Yet it was hard to deny the need for new customers. Club Med recorded a 9 million euro net loss for fiscal 2014. More than 70% of its revenue came from Europe and Africa, and many of these resorts were slammed by the global financial crisis, as well as the Ebola epidemic in West Africa and fears of terrorism.

"When we became the controlling shareholder, I insisted to French media that we didn't want to change the Club Med model, being a French-style resort provider," Jim Qian, Fosun Tourism's chairman and CEO, told the Nikkei Asian Review in May. "But we wanted to make the business more international and customer-oriented."

After four years under Fosun, things are looking sunnier. "Club Med delivered a very encouraging performance" for fiscal 2018, said the chain's president, Henri Giscard d'Estaing, who sided with Fosun in the bidding war. The business depended less on Europe and Africa -- 64% -- while growing in Asia on its way to a 406 million yuan ($58.8 million) operating profit. 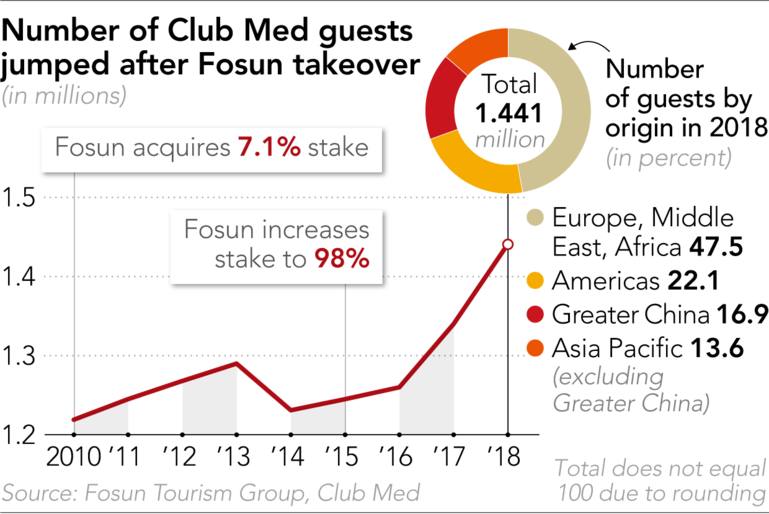 Fosun Tourism -- which was listed in Hong Kong last December, raising more than $400 million -- performed better in fiscal 2018 too. Revenue reached 16.2 billion yuan, up 37.9% and accounting for 15% of the group total. The travel business logged its first net profit, 389 million yuan, versus a 295 million yuan loss the previous year.

With Joyview Anji and five other Club Meds in China, among a total of 67 scattered across 25 markets worldwide, the group sees more room to cash in on Chinese wanderlust.

One challenge is to lure overseas Chinese tourists to the beach. Chinese travelers made 149 million outbound trips in 2018, up 14.7% from 2017, according to China's Ministry of Culture and Tourism. But Qian said 80% of those who go to Europe only visit major cities like Paris, London or Milan. "We can increase the interest of Chinese customers ... who are still very much inclined to cities."

Meanwhile, Qian noted, only 9% of Chinese have passports.

"China is now facing structural changes with the rise of the middle class," said the executive, who studied and worked in Germany for 10 years. "We create new demand for leisure in China by meeting a variety of needs for family holidays in one place."

While Club Med opened few resorts in the decade before the ownership change, Fosun has accelerated expansion. In China, the launch of the Joyview brand in 2015 made resorts more accessible to urban residents, allowing two- or three-day breathers close to Beijing, Shanghai, Guangzhou and other big cities. The strategy is driven by Chinese workers' shorter annual leave compared with Europeans.

In March 2018, the company announced plans for 15 new all-inclusive resorts worldwide by the end of 2020. It opened five in fiscal 2018, including Tomamu Hokkaido in northern Japan and Cefalu in Sicily, Italy. Club Med has also renovated existing locations, raising the ratio of four- or five-star Trident luxury resorts to 80% in fiscal 2018, from 72% in fiscal 2014.

Lydia Ling and Xiaopo Wei at Citigroup think Club Med is capable of maintaining stable 6% revenue growth in fiscal 2019 "through its continuous upscale and globalization efforts," and have called Fosun Tourism "a rare quality play in the global leisure tourism industry."

For Qian, Club Med is only part of the equation.

He is building an "ecosystem" of leisure services called Fosun Holiday, or Foliday. The portfolio includes Foryou Travel, an online provider of personalized holiday packages and show tickets; Kuyi, a joint tour operator with Thomas Cook; Miniversity, a chain of learning and activity clubs for children; and Fanxiu, which produces cultural and entertainment events, including Cirque du Soleil.

Club Med in fiscal 2018 generated more than 70% of Fosun Tourism's revenue. But the other elements are supporting a push to establish independent luxury resorts like Atlantis Sanya in Hainan, which opened in February 2018. It has hosted Cirque du Soleil and features a Miniversity.

The resort on the island known as China's Hawaii houses over 1,300 rooms and a residential area, along with China's largest natural seawater aquariums and a water park. Some rooms have underwater aquarium views.

Atlantis Sanya raked in 150 million yuan of revenue during this year's Chinese New Year holiday period alone. Though its 58% occupancy rate has been lower than some analysts anticipated, the resort has done well enough to make Fosun Tourism greenlight two more projects in China, one of which will be 30 minutes from Shanghai.

Both are set to open in late 2020, with the total cost estimated at 10 billion yuan. Thomas Cook-branded hotels will be built by Fosun Tourism and managed by another joint venture with the British company.

Others, though, question the profitability of Fosun Tourism and the wisdom of the proposed Thomas Cook acquisition.

Jonathan Galligan, an analyst at CLSA, cautioned in a report that Fosun Tourism's first profit was driven by sales of Atlantis Sanya residences. Galligan said that if nonrecurring items like property sales are stripped out, Fosun Tourism's recurring loss widened to 673 million yuan for fiscal 2018, from 367 million yuan the previous year.

In his initial forecast for fiscal 2019, Galligan expected Fosun Tourism's attributable profit to soar to 785 million yuan, from 308 million yuan the previous year. He has cut the projection by 15% to 670 million yuan.

"It may be possible to bring more Chinese tourists to Europe," Shibata added, "but it's too early to bring Western tourists into China."

Qian remains bullish. "Thomas Cook is a well-known brand, and has a lot of resources in Europe, which have made very good synergies so far," he said. "Through our Foryou Travel, we can combine a stay in a Club Med resort in Europe with some city visits," he said, stressing "the ecosystem is already working."

Fosun International Chairman Guo sees the travel business as a blueprint for a broader transformation from an investment group to a more hands-on player. Fosun Tourism, Guo said in March, "sets the path for many other Fosun platforms to replicate."