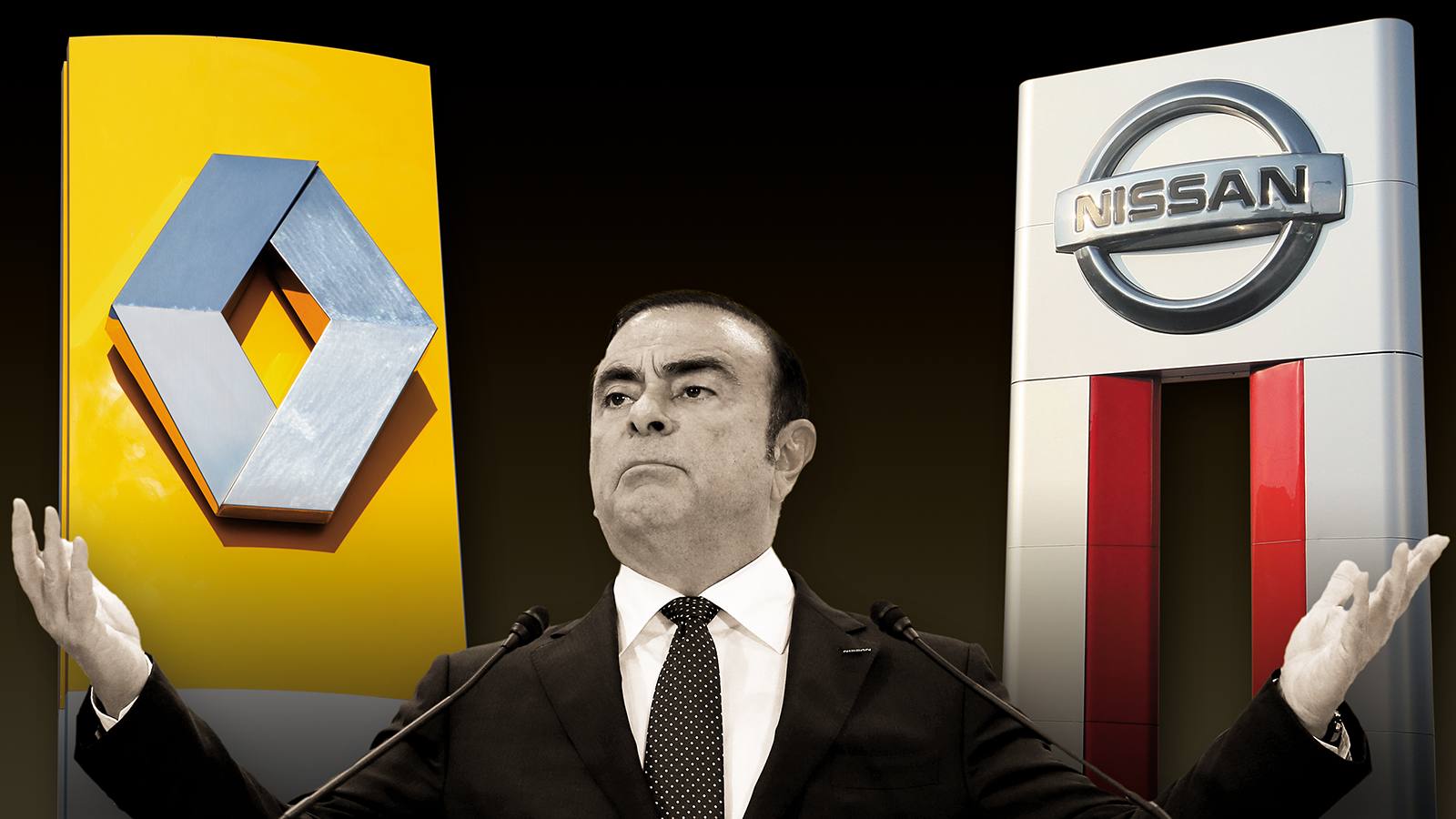 Ghosn's fall from grace: How Nissan's savior became a threat

TOKYO -- As the glitterati gathered for a party at the French ambassador's residence in Tokyo on Monday evening, everyone's attention was focused on a man who was not there.

News of the former Nissan Motor Chairman Carlos Ghosn's arrest had just broken. So while Bank of Japan Gov. Haruhiko Kuroda toasted his country's friendship with France, and partygoers clinked Champagne glasses as if nothing was amiss, many could not help whispering.

"Was he really arrested?" one said. "Is there any new information?"

The presence of some French Nissan executives made the situation even more awkward. Also on hand was Louis Schweitzer, the former chairman of French automaker Renault, who in 1999 dispatched Ghosn to save a moribund Nissan.

Agnes Pannier-Runacher, France's deputy economy and finance minister, looked grim. A Nissan executive approached by Nikkei would only say that a news release was available.

The shock was still raw. But the events that led to Ghosn's arrest had been set in train six months earlier.

A senior Nissan insider was scrutinizing Ghosn's confidential financial information when he noticed possible evidence of misconduct. He was shocked. "This must not be allowed," he recalls telling himself as he combed through the documents.

A top-secret investigation team was formed inside the company, including this insider. The investigation was kept secret from many company executives, especially Ghosn. The probe culminated with Japanese authorities detaining Ghosn aboard his private Gulfstream jet.

Agents from the Tokyo District Public Prosecutors' Office boarded the plane, tail number N155AN, as soon as it landed at Haneda Airport on Monday afternoon. After initial questioning, the chairman was transported for processing at the Prosecutors' Office in the capital.

Within hours, Ghosn was under arrest on suspicion of underreporting his income.

Ghosn's sudden downfall came just as he was orchestrating what might have been the boldest move of an already storied career: integrating Nissan and Renault. In April, roughly around the time the internal investigation began, the then chairman announced a review of Nissan's capital ties with Renault.

The French government had told Ghosn they wanted the alliance with Nissan to be "irreversible." But Ghosn knew Nissan's board would oppose a full merger. President and CEO Hiroto Saikawa, who had taken over day-to-day management from Ghosn last year, had already made his objections known publicly.

People close to Ghosn say one of his ideas had been to set up a holding company that would have stakes in both automakers, allowing them to remain separate entities.

But even this sparked suspicion. Ghosn may have surrendered some of the power he held over Nissan by giving up the chief executive role to Saikawa. But the big decisions still rested in his hands.

Alarm bells rang when Ghosn later implied to other executives that, after shifting to the new structure, he intended to install himself atop the new entity.

In September, the board agreed to review the capital relationship between Renault and Nissan. But the details of what this would involve were left for later.

One Nissan executive believes Ghosn was "going to officially decide on the new structure by next spring," possibly coinciding with a lavish ceremony in Paris to celebrate the 20th anniversary of the alliance in March. Had Ghosn fulfilled his ambition, strengthening his hold on the two companies, the scandal might never have come to light.

But even as Ghosn was laying the groundwork, Nissan was bringing in outside authorities. The company had handed the information gathered in its internal investigation to prosecutors. Meanwhile, Renault and the French government were kept in the dark. One Renault director at the party held in the French ambassador's residence only learned of the affair online.

Ghosn, a Brazilian-born French citizen, shot to global stardom by pulling Nissan back from the brink of bankruptcy. He engineered a radical restructuring drive that involved brutal cost cutting -- living up to the nickname he earned at Renault, "Le Cost Killer" -- and established himself as Nissan's unchallenged leader.

Few would deny that Ghosn achieved far more than cost reductions. His habit of working from early morning until late at night earned him another moniker, "Seven-Eleven." He shook up Nissan's staid corporate culture, listened to young employees and handed out promotions based on merit, regardless of gender or nationality. Along the way, he set an example for executives at other Japanese companies. He was living proof that it was possible to break free from outdated management traditions.

Yet, he may have veered onto the road to ruin in 2005, when he became CEO of Renault as well.

"The capital relationship between Nissan and Renault, based on cross-shareholdings, was not designed with the assumption that the two companies would be led by one person," said a former senior executive who was involved in forming the alliance.

After Schweitzer retired in 2009, Ghosn pushed harder to build an automaker that could rival the world's biggest.

Besides joint Renault-Nissan projects, he led Nissan's acquisition of a controlling stake in scandal-plagued Mitsubishi Motors in 2016. This catapulted the alliance into an exclusive club of carmakers turning out over 10 million vehicles a year, alongside Toyota Motor and the Volkswagen group.

Ghosn started calling himself the "founder of the alliance."

But as his grip on the companies tightened, Ghosn began to lose some of his most able lieutenants. Executives he once relied on jumped ship, robbing the group of not only talent but also people who might have checked his impulses.

Andy Palmer, the former Nissan executive vice president who was one of the defectors, made some telling remarks during a visit to Japan in early November.

Palmer, now the CEO of British luxury sports carmaker Aston Martin, said that he left in 2014 because he realized he would never reach the top as long as Ghosn was around.

Palmer told Nikkei he had no intention of clinging to power in his new job. "Many CEOs fail to [groom] successors," he said. "That is not my intention. I have a number of people around me who could be future CEOs. I will leave Aston when I believe the company is sustainable."

Around the time Palmer left Nissan, the alliance lost another key executive. Carlos Tavares, who had been serving as Renault's chief operating officer and was widely regarded as Ghosn's heir apparent, moved to the automaker's French archrival, PSA Group.

In the interview with Nikkei, Palmer questioned Nissan's future, given that Ghosn had lost two vital lieutenants. "He let go of both arms," Palmer said.

Yet another key executive, Nissan Chief Financial Officer Joseph Peter, left the company in May. A senior Nissan executive says the CFO had made several critical comments about the chairman's management, sparking speculation of conflict with Ghosn.

With Saikawa handling the daily details, Ghosn's visits to Japan had become less frequent. Nissan employees say that even when he was in Japan, Ghosn was less present in the office, and more distant from operations. But his ambition still burned. When the authorities stopped him at Haneda, Ghosn was believed to have been on his way to prepare for a restructuring of the Nissan-Renault union that would cap a stellar career. He had a packed schedule in Japan, including a meeting with Tokyo Gov. Yuriko Koike on future mobility.

Instead, Nissan's board ousted him as chairman on Thursday, his grand plan left up in the air, and he remains in custody. The three-automaker alliance now faces the challenge of restoring investor confidence while keeping up with the technological changes sweeping the industry, such as autonomous driving.

It could be said that Ghosn left Nissan the way he found it -- in crisis.