Southeast Asia's ride-hailing market is consolidating into a two-horse race between Grab and Go-Jek. (Photo by Akira Kodaka)
Company in focus

Grab aims to stay on top with evolution into 'everyday superapp'

Moving beyond ride-hailing crucial to overcoming competition and regulation

Increased competition and regulatory hurdles, however, mean that moving forward has been far from easy, and the ride-hailing app operator's answer is to diversify.

"In the beginning, Grab was just a simple taxi app," said 36-year-old chief executive and co-founder Anthony Tan." Now, he claims, it is becoming an "everyday superapp."

On July 10, the company announced that it would start offering lifestyle services in partnership with other consumer businesses in a bid to create its own ecosystem.

Under its new "open platform" strategy, Grab will allow partners to access its user database, mapping systems, logistics and other resources.

The first new service is online grocery shopping, for which Grab has partnered with Jakarta-based company HappyFresh, offering more than 100,000 products.

Since it was founded in Malaysia in 2012 by two local graduates of Harvard Business School, the ride-hailing app operator has focused on the Southeast Asian market. Grab has grown rapidly due to the region's underdeveloped public transportation systems, as well non-transparent taxi fares and the perceived recklessness of their drivers.

The number of employees currently stands at 3,000. They come from about 40 countries, and include computer engineers with experience of working for the likes of Google and Facebook. Grab has raised more than $5 billion in capital and is now valued at $10 billion, the biggest "unicorn" in Southeast Asia, according to CB Insights.

After five years of fierce competition with Uber Technologies, Grab this year acquired the Southeast Asian business of its rival, which strengthened its dominant position in the region and sped up growth. Meeting rooms at Grab's headquarters are named after cities in Southeast Asia. (Photo by Kentaro Iwamoto)

But as it expands, Grab faces increasing pressure from regulators. The Malaysian government on July 11 suddenly announced changes to ride-hailing industry rules, requiring that Grab drivers meet the same standards as traditional taxi drivers. According to the official line, the change is designed to promote professionalism, but some have claimed it is really there to protect the taxi industry, which has lobbied heavily against Grab. 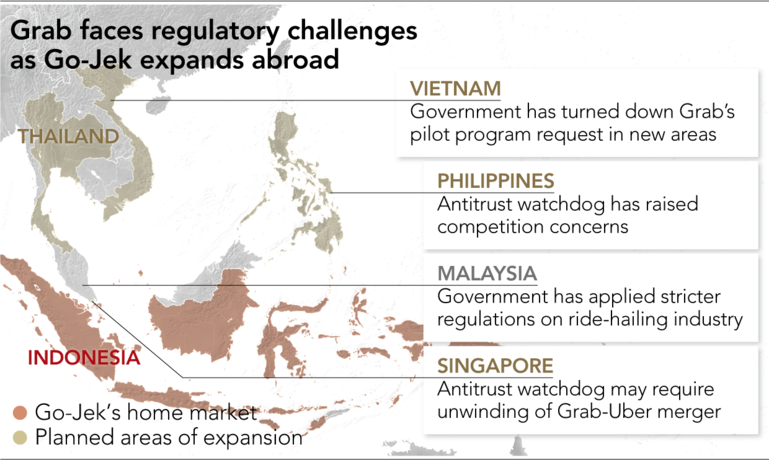 "Who will want to be a Grab driver under the new rules?" asked middle-aged driver in Johor Bahru rhetorically.

He is one of a number of part-time Grab drivers who also have full-time jobs, but said the additional burden may convince him to quit. "After one year [of the transition period to the new rules], you will see far fewer Grab drivers," he predicted. Many feel that the burden of new regulations in Malaysia will encourage many Grab drivers to stop offering their services. (Photo by Takaki Kashiwabara)

"We hoped that we, like other players in the market, would have been consulted earlier as it affected hundreds of thousands of drivers across the country," Sean Goh, Grab's Malaysian head, said in a statement. Goh described the drivers as "the backbone of our community."

This is not the only regulatory challenge the company faces. The Competition and Consumer Commission of Singapore concluded in July that the Grab-Uber merger breached the city-state's competition law as it resulted in a "substantial lessening of competition." The commission proposed measures to remedy the situation, including allowing drivers to work for more than one ride-hailing operator and the retention of pricing algorithms and driver commission rates that existed before the merger.

The Singapore regulators said there were "numerous complaints from both riders and drivers in relation to the increase in effective prices" after the deal went through. It raised the possibility of imposing financial penalties on Grab of up to 10% of the company's annual revenues in Singapore, and said it may still dissolve the merger.

Grab on July 27 said it "disagrees" with the commission's argument that competition has lessened in Singapore. In its written response to the regulator, Grab said it "competes with all other transportation service providers for the same limited pool of commuters." The proposed remedy of striking down Grab's exclusivity contracts with drivers is "one-sided," the company added, saying that all other players are allowed to enter into such deals.

Grab is also facing increasing competition in a number of markets. On July 18, a new ride-hailing motorbike service, Go-Viet, was launched in Ho Chi Minh City on a trial basis. Go-Viet is the local affiliate of Indonesia's Go-Jek, Grab's biggest remaining rival in the region.

Competition between the two is also fierce in Go-Jek's home market. In early April, soon after Uber announced its departure, both companies began recruiting its former drivers to beef up their fleets.

Go-Jek in May said it would expand into Vietnam, Thailand, the Philippines and Singapore, supported by $500 million in investment, although Vietnam is the only market it has entered do far.

Other local startups, such as Vietnam's Aber and Singapore's Ryde, have entered the race. Diversification is a logical step, according to analysts. "Growth in ride-hailing is actually very expensive at this stage. Costs have to come down and efficiency has to improve dramatically to drive growth," said Walter Theseira, transport economist at the Singapore University of Social Sciences. "Based on current driver wages and fare levels, there is little room for growth."

"So regardless of competition concerns, I believe Grab would have wanted to expand in relatively untapped markets," he added.

Grab had already begun exploring food delivery services and mobile payment in 2016. Its mobile payment service, GrabPay, is spreading beyond paying for Grab ride fares. Customers can make payments by reading the QR code of restaurants and stores and enter the amount on their smartphones.

Another initiative involves partnering with Toyota Motor, which invested $1 billion in the company in June, to develop connected cars incorporating "internet-of-things" technology. "We are going to make sure our fleets are the most efficient. We are using a lot of connected technologies to continue to make our fleets run very efficiently," said Tan. Grab's chief executive and co-founder Anthony Tan has said the company intends to make sure its fleets are the "most efficient." (Photo by Kentaro Iwamoto)

In many ways, Grab is seeking to replicate the success of companies like Tencent Holdings and Alibaba Group Holding in China by creating its own ecosystem in Southeast Asia.

Go-Jek, however, has similar ambitions and has already launched the Go-Pay payment service and Go-Food delivery service in Indonesia.

"The ride-hailing industry is consolidating towards a two-horse race," said Corrine Png, chief executive of Singapore-based transport research firm Crucial Perspective. "Both Grab and Go-Jek will also compete to add local partners to their respective ecosystems. This will allow them to boost profits while remaining asset light."

Grab's open platform strategy may entail risks, adds Png. "External partners may require extensive in-depth information about Grab's users and Grab will have to balance profit motivations against the need to protect its users' privacy. Mismanaging this crucial issue of user privacy could result in a highly damaging backlash for Grab."

While expanding its services, Grab continues to raise funds to invest in technologies. The company now has six research and development centers, including ones in China, India and the U.S. The Singapore headquarters has a data science unit employing nearly 50 scientists from 10 countries.

The core members of the unit also work on the campus of the National University of Singapore, Asia's top-ranked university, where Grab has opened an artificial intelligence laboratory. According to Lye Kong Wei, head of data science at Grab, the lab's research includes developing an algorithm that predicts traffic flows and another that improves matching the preferences of passengers and drivers. Grab plans to recruit and train more AI talent. Tan is confident the company can meet the challenges head on. "Grab is used to competition. We have been battle-tested ever since the day we started," he said. "We embrace the competition. In fact, we love it because that makes us innovate faster."