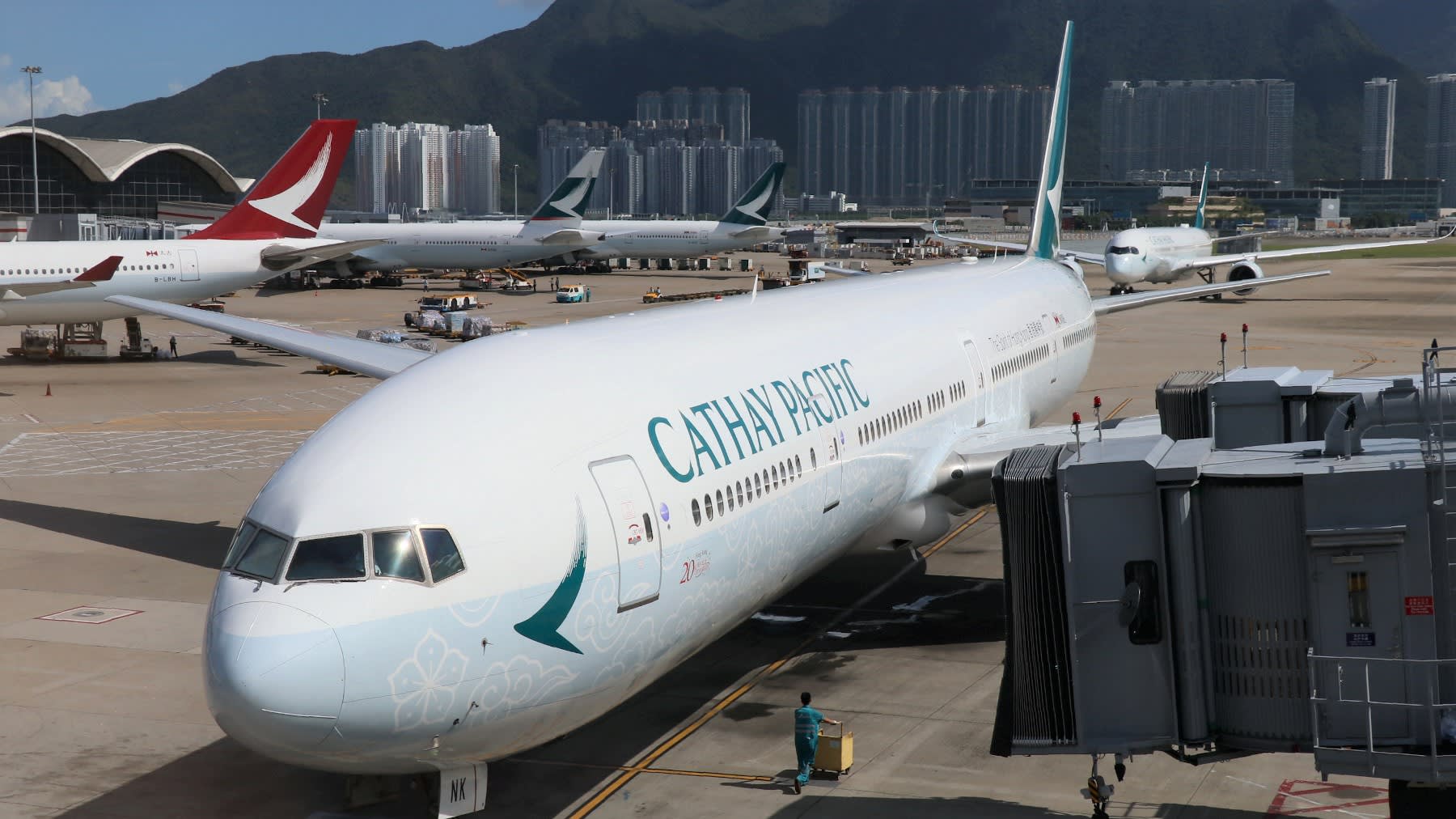 A Cathay Pacific plane taxis at Hong Kong International Airport. Several employees of mainland state-owned companies told the Nikkei Asian Review that there is an "unspoken rule" among colleagues not to fly with Cathay. (Photo by Shinya Sawai)
Company in focus

HONG KONG -- Half a year ago, Fion, a flight attendant with Cathay Pacific Airways, avoided wearing face masks for fear of being associated with the pro-democracy protests that were rocking the city. Now, she wears a mask on all flights to and from mainland China to guard against the coronavirus that has killed over 600 people since it broke out in Wuhan in December.

Fion's mask confusion reflects the twin challenges facing Hong Kong's biggest and oldest airline. But while the coronavirus is grabbing headlines, the greater test for the company may be how it navigates the delicate balance of "one country, two systems."

In early 2019, investors breathed a sigh of relief after Cathay swung to a profit for the first time in three years, having completed a lengthy restructuring plan. The monthslong protests dented inbound travel to the city, but the airline's better-than-expected passenger traffic helped its share price recover toward the end of the year.

Then the coronavirus hit. Chinese health authorities confirmed human-to-human transmission of the new virus on Jan. 20 and reported a surge in infection numbers just ahead of Lunar New Year holidays. Within two trading days, Cathay's share price plunged 13% as investors in Asia -- whose memories of SARS epidemic remain vivid -- feared the worst was yet to come.

"It depends on how quickly the situation escalates, but I imagine airlines in the region will be severely impacted," said Paul Yong, an analyst at DBS Group Research, noting that aircraft occupancy in Asia remained lower than 50 percent for a couple of months during the outbreak of Severe Acute Respiratory Syndrome in 2003. In response to the dwindling travel demand, Cathay Pacific announced in early February its plan to drastically cut mainland China flights by 90% and consolidating flight schedules on other routes, bringing the total capacity cut to 30% worldwide over the next two months. The airline has also asked its employees to take three weeks of unpaid leave by end of June to further cut costs.

In a video message urging staff to cooperate, CEO Augustus Tang compared the current challenges to the 2009 financial crisis, saying, "The situation now is just as grave."

With the number of confirmed virus cases topping 31,000 -- already triple that of SARS -- the outbreak is likely to deal a heavier blow to the airline industry this time around. China air passenger traffic dropped as much as 70% when the SARS epidemic broke out 17 years ago and only began to recover after five months of consecutive decline.

The impact of the coronavirus has been sharp and sudden, but the silver lining is that the aviation industry tends to rebound quickly once such crises are over. Cathay Pacific in particular has a track record of being resilient in tough times -- it returned to profit in the second half of 2003, when the epidemic ended.

But this time around, the political challenge hanging over the airline could hamper such a speedy recovery. 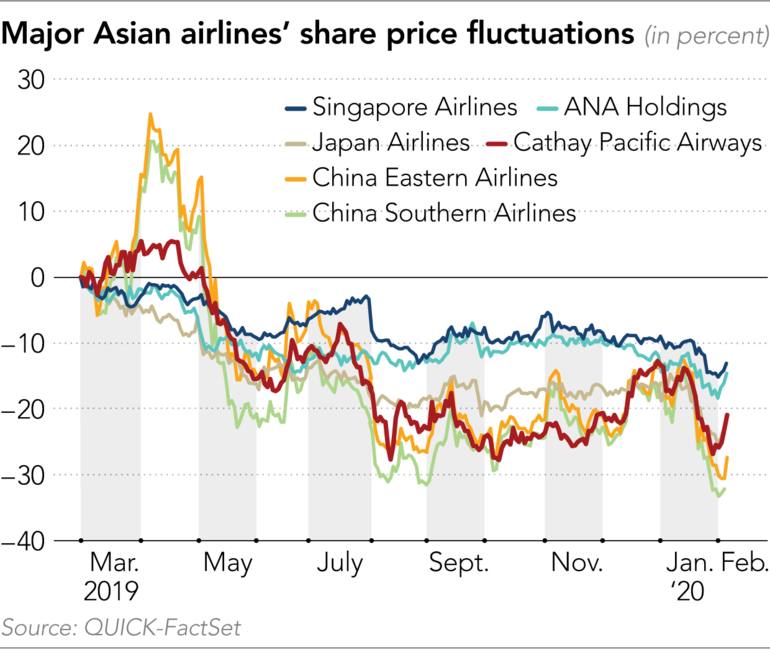 The 74-year-old airline generates almost half its revenue in China and Hong Kong. Like Hong Kong itself, Cathay is in a delicate position when it comes to navigating tensions between the semi-autonomous city and the mainland.

Anti-government demonstrations broke out in the former British colony in June last year. In a dramatic turn for the airline, Rupert Hogg resigned as CEO of Cathay last August amid criticism from Chinese regulators over the involvement of its employees in the protests. Hogg's deputy Paul Loo, then chief customer and commercial officer, also stepped down. One month later, John Slosar resigned as chairman of Cathay Pacific, saying he would "retire."

Speaking on condition of anonymity, sources with knowledge of the decision said the management reshuffle is an attempt by Swire Pacific, Cathay's parent company, to make peace with China.

Hogg was replaced as CEO by Augustus Tang. Upon taking office, Tang published several statements condemning the violent protests and supporting the government's work to restore order in Hong Kong. He also urged employees via internal letters that they should "mind their words and actions" on social media and in private, so as to ensure the "unimpeachable reputation" of the company.

But while tensions seem to have eased since the Beijing-friendly Tang took over, Cathay has yet to restore its image in the eyes of Chinese patriots. A worker in a protective suit takes the temperature of a passenger on a Cathay Pacific flight from Hong Kong after it landed at Rome Fiumicino Airport in Rome on Jan. 31.   © AP

Fueled by state-run media, a boycott campaign against the airline has garnered wide support in mainland China, with a spate of state-owned companies telling their staff to avoid using Cathay Pacific flights for business trips.

Several employees of state-owned companies told the Nikkei Asian Review that there is an "unspoken rule" among colleagues not to fly with Cathay in order to prevent troubles. Some Chinese financial firms, citing "safety and security," require preapproval for staff members who want to travel on Cathay.

"Some SOE customers may find it offensive to fly with Cathay in the short term, before the on-the-ground situation [of protest] improved in Hong Kong," said Luya You, a transportation analyst at Bocom International.

You said she does not see "any other issues in the long term."

But while mainland customers might forgive and forget, the airline is also under fire at home following the dismissal of pilots and cabin crews over their alleged participation in the protests. Cathay is in the midst of a lawsuit for wrongful dismissal after firing flight attendant union leader Rebecca Sy, who said she was sacked because of her pro-protest social media posts.

This incident, says Fion, has deterred many employees from taking active roles in the labor union.

"I have never seen such reluctance before, my colleagues all prefer staying silent in this sensitive timing," said Fion, who has worked at Cathay for 15 years. The political crackdown at work, combined with Cathay's latest cost-cutting measures, are prompting many to rethink their commitment to the company, she added. That is a potentially worrying trend for management of Cathay Pacific, which hires more than 80% of its staff in Hong Kong.

There are even calls for a boycott against Cathay Pacific in Hong Kong -- though fortunately for the company, it is much harder to sustain thanks to its quasi-monopoly in the territory. Following its acquisition of budget carrier Hong Kong Express, the group currently holds over half of the seat capacity at Hong Kong International Airport.

"I wanted to join the boycott, but it is just impossible because Cathay has all the best slots," said a frequent Cathay flyer, adding that for "basically everyone" in his company, a U.S. investment firm, the airline is the default option because it has "excellent service that no other Chinese airlines can provide." Top-notch service is also why state-run Air China, the second-largest shareholder of Cathay Pacific, remains committed to its 30% stake despite the political saga, according to Luya You of Bocom International. "Air China still got a lot to learn from Cathay, a full-service global carrier with premium offerings," said You. "They definitely find the relationship with Cathay worth continuing."

Cathay Pacific has rolled out a series of damage-control measures in recent months in response to declining travel demand, including steep discounts and cuts in passenger and cargo flight capacity. These measures have started to bear fruit, as seen in recent improvements in occupancy rate. Although overall airline passengers in Hong Kong fell 13% in December, the traditional peak travel season, the number of passengers Cathay carried dropped just 3.6% on the year.

But this comes at the expense of profit margin. Bookings were driven mainly by low-fare tickets and lower-yield transit traffic via Hong Kong. The latter grew by 15% in December compared to the same time in 2018.

"My doubt is, if customers get used to the discounts, are they willing to pay the regular price again in the future?" said Zhao Dongchen, research director at ICBC. "Not to mention we are experiencing an economic slowdown and an intense price war with low-cost carriers." 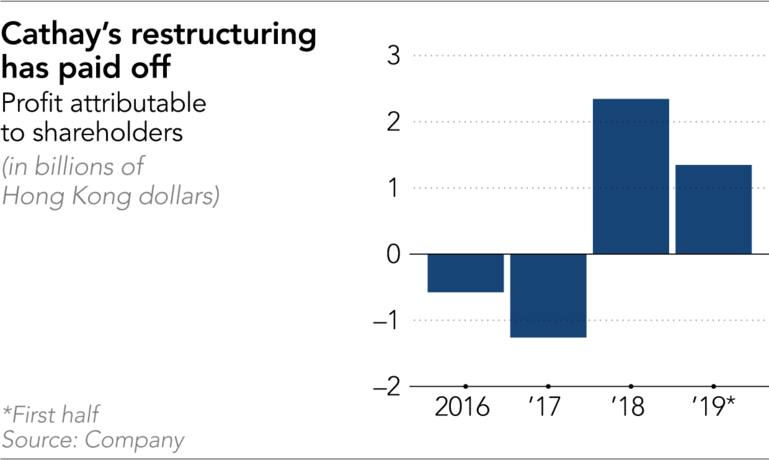 In terms of pricing, Hong Kong Express can help fill a void for Cathay Pacific, said Andrew Cowen, chairman of Asian airline advisory Mango Aviation Services and the former CEO of Hong Kong Express. It can also help Cathay to tap into the younger travelers' market, who are more price-sensitive, he said.

The exclusive destinations Hong Kong Express offers, including secondary cities in Japan, are also beneficial to Cathay's market expansion, according to You of Bocom.

But for now, Hong Kong Express is "likely to be a further drag on Cathay's bottom line," given the budget carrier was loss-making in 2018, said Paul Yong of DBS. "The acquisition has its positive side in the long run, but it could not have come at a worse timing."

He added that Cathay's gearing ratio -- its net debt to total equity -- is near its 10-year high, leading to the airline's decision to defer delivery of four Airbus aircrafts to delay capital investments. Cathay is also asking suppliers for price reductions, implementing hiring freezes, postponing major projects and stopping all noncritical spending. "Preserving cash is now the key to protecting Cathay's business," CEO Tang said in an internal video message released on Feb. 5.

But despite the pessimism in the near term, the Swire family, Cathay's controlling shareholder, has faith in the airline's future, according to Brendan Sobie, founder of Singapore-based aviation consulting company Sobie Aviation. Swire must still be interested in the long-term China travel story and see strong growth potential in that market, he said. Hong Kong is becoming increasingly connected to China's greater bay area by bridges and high-speed rail, and a third runway at Hong Kong International Airport is scheduled to open in 2022, which is expected to increase movements via the airport by 50%. Given this growth potential, Cathay Pacific "would want to expand and maintain their market share," Sobie added.

The geographical location of Hong Kong -- midway between North Asia and Southeast Asia -- has been key to Cathay's passengers and cargo businesses, according to Paul Yong of DBS, who pointed to Cathay's higher-than-peers cargo contribution of up to a quarter of annual revenue.

"As long as Hong Kong maintains its status as a regional trade hub, there are good reasons to be confident in Cathay."

Cathay Pacific is in many ways a microcosm of Hong Kong. It has built of a uniquely competitive brand over the course of decades. Now, in the face of political pressure and a public health crisis, it must find a way to tap the vast market next door without sacrificing its identity.