Hong Kong's MTR gets praise abroad but criticism at home 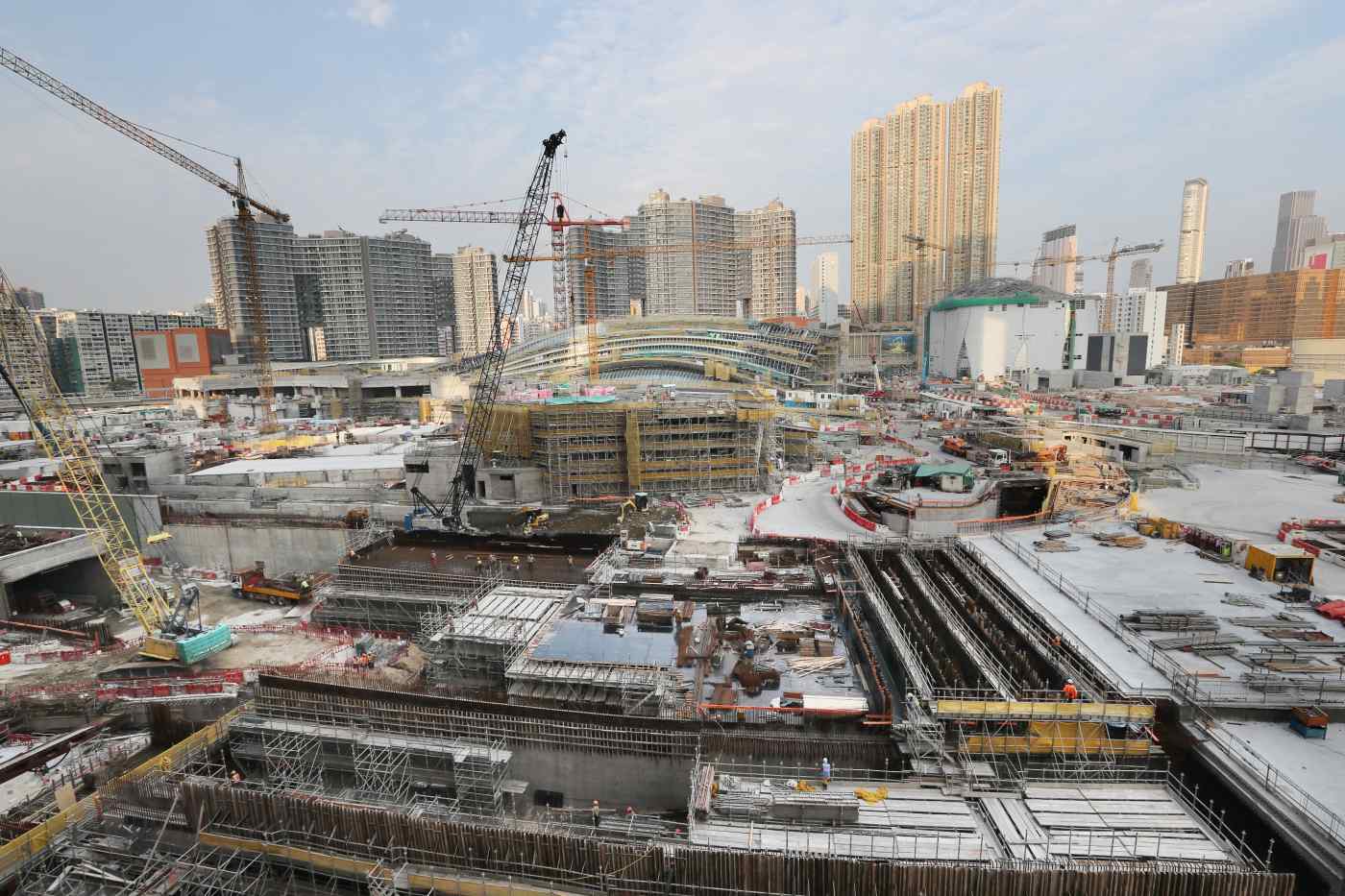 HONG KONG -- Long before any talk of belts and roads, MTR looked beyond the territory for expansion.

But it was not until recently that the monopoly operator of Hong Kong's profitable metro system said it wanted to do business in Southeast Asia. With a third of its revenue coming from railway operations in Europe, Australia and mainland China, MTR is planning to partner with state-owned China Railway Corp. to bid for a contract to build a high-speed railway linking Singapore and Kuala Lumpur.

The 350km railway is expected to cut travel time between the two cities to 90 minutes when it is completed in 2026. The investment would also be MTR's first undertaken as part of Chinese President Xi Jinping's ambitious Belt and Road Initiative to build infrastructure in more than 60 countries using Chinese engineering companies and suppliers.

While it is still too early to determine whether MTR's move is driven primarily by business or political considerations, the timing is significant. MTR Chairman Frederick Ma Si-hang, as part of a select delegation at the Beijing-led Belt and Road Forum, revealed the deal during the high-profile event in the Chinese capital in early May.

Ma admits it is hard to quantify the benefits of the initiative for the company because of the political risks in some of the developing countries taking part. "We'll be very cautious in every project we undertake," he said after a shareholders meeting on May 17. "MTR will have a role to play in Belt and Road," he added, whether it is as an investor, project manager or consultant. 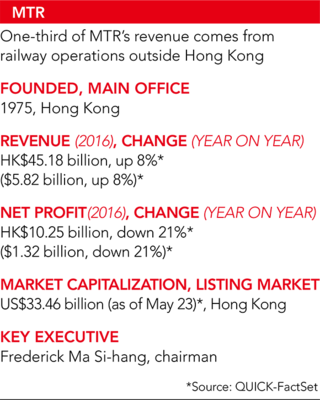 HOME COMFORTS Ma's remarks appeared aimed at relieving worries among some minority shareholders over the profitability of MTR's sprawling overseas businesses. Concerns have grown that MTR's diversification drive is draining resources and shifting attention away from problems at home.

MTR's 231km metro system in Hong Kong may not be as big as those in New York or London, but its profitability has been a source of envy within the transportation industry. The London Underground is twice as long as Hong Kong's subway, but the latter carries more passengers. It had an annual ridership of 1.9 billion in 2016. 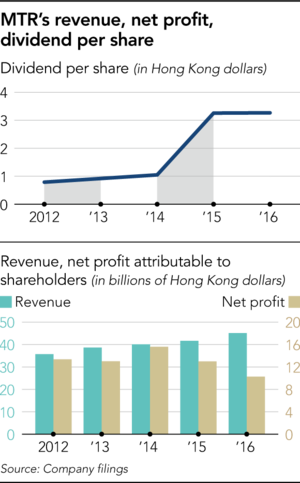 Over the past five years, MTR has reported a net profit of more than 10 billion Hong Kong dollars ($1.28 billion). Although its 2016 profit was down 21% on the year, due to a slower property market, its revenue rose 8.4% to HK$45.2 billion, helped by steady income from its railway business.

However, MTR's overseas projects are less profitable than its domestic operations. Its property and train business in China and abroad contributed a third of MTR's revenues last year, but accounted for only 8% of earnings due to high costs.

"They are more of a promotion of the Chinese railway system for some political reasons," said Jennifer Song, an equity analyst at Morningstar, referring to BRI-related railway projects. "We don't see good returns from those projects ... because you just don't know how much traffic they will get."

China Railway also reportedly threw cold water on its partnership with MTR. A company executive was quoted as saying China Railway had "not considered" a joint bid with MTR for the Singapore-Malaysia project, according to Caixin, a Chinese business news site, on May 17. This is in spite of an agreement reached in mid-December by the two companies to "jointly investigate business opportunities in the high-speed railway sector," said an MTR spokesperson.

The proposed bid came weeks after MTR added Jakarta to its long list of consulting clients, which include railway operators in India and the Middle East. The crowded Indonesian capital is building its first metro line to ease traffic in one of the world's most congested cities.

"It's quite obvious that MTR has one of the highest standards in world-class railway operations," said Agung Wicaksono, director of operation and maintenance at Jakarta MRT, who attended a weeklong executive program at the Hong Kong-based MTR Academy with railway operators from Sweden and Saudi Arabia in late April.

Wicaksono told the Nikkei Asian Review that Jakarta is learning from "all aspects" of MTR. These include efficient service -- the company puts its on-time arrival rate at 99.9% -- and its controversial retail and property operations that are blamed for boosting already soaring housing prices in Hong Kong.

MTR earns money from managing malls and shops connected to train stations in Hong Kong and mainland China. Last year, rental revenue from its station shops rose by 5% year-on-year despite a retail downturn in Hong Kong. The Hong Kong government also provides land at low cost to MTR, which is then allowed to partner with developers to build apartments. MTR has benefited from the recent entry of more Chinese developers into the Hong Kong property market as they hedge against a weaker yuan.

GLOBAL MODEL In February, MTR attracted 14 bidders -- a record number for a tender along its railway lines when a joint venture led by the property arm of China's Ping An Insurance won the rights to a residential site in southern Hong Kong Island. MTR wants to solicit bids this year for six residential projects comprising 8,000 apartment units.

Besides Jakarta, other Southeast Asian cities are trying to emulate the MTR model. Singapore's transport minister has cited MTR as a benchmark for reliability for the city-state's rail operators SMRT and SBS Transit. The Asian Institute of Technology in Bangkok is partnering with MTR to offer postgraduate courses on railway management. Melbourne and Stockholm have had MTR run their subway systems since 2009. In mainland China, it operates three lines of the Beijing metro and other lines in Shenzhen and Hangzhou.

In the U.K., MTR operated the London Overground for nine years until last November and has been selected to run London's Crossrail suburban rail network, soon to be renamed the Elizabeth Line. In March, it won a $3.38 billion franchise with FirstGroup to run South Western Trains, one of Britain's busiest rail networks. But critics say MTR's model is hard to replicate elsewhere. Hong Kong has one of world's densest urban populations. Car ownership is discouraged by the government and some 5.6 million passengers are carried by MTR trains every day. Ticket sales to a large commuter public more than cover MTR's day-to-day operating costs without the need for government subsidies.

Simon Lee Siu-po, a senior lecturer at the Chinese University of Hong Kong Business School, said MTR's success has largely to do with Hong Kong's land and transport policies. He doubts the model can work in other places without similar demographics and government support.

"MTR is successful from a business point of view, but not so much in upholding its social responsibility," said Lee, who uses MTR as a case study for his students. "It is worrying that a public utility is diverting too much of its attention from its domestic service to overseas expansion."

OVERSEAS FOCUS These days, MTR is spending more overseas than at home. Costs related to China and overseas operations rose in 2016 by 16% to HK$14 billion from a year earlier. That compared with a modest 2% increase in spending on transport and commercial and property operations in Hong Kong, which totaled HK$11 billion.

Hong Kong residents are complaining of rising fares and service delays. While basic fares will be frozen this year under a formula that is supposed to raise or lower fees annually, this comes after seven years of fare increases.

The number of major service disruptions also rose to 15 in 2015 from seven in 2013. On May 18, a power failure disrupted train service to the Chinese border and left thousands of passengers stranded for four hours, just weeks after a similar incident hit an urban line during rush hour.

Hong Kong lawmaker Claudia Mo Man-ching has described MTR as a "deformed monster" because it is struggling to balance its roles as an affordable railway service and a profit-chasing listed company. "The gap in vision is just too huge to close," she said.

MTR began as a government body in the 1970s before it was privatized in 2000, although the government still retains a 75% stake. Some have called the privatization a mistake since MTR is allegedly neglecting its public duty after taxpayers financed the construction of the rail network before 2000. There are suggestions that the government should take full control of MTR once again and use the money that is paid out in dividends to subsidize passenger fares.

"This is an issue of social fairness -- MTR is using the cover of a listed company to raise fares and pull back from providing public facilities from toilets to breastfeeding rooms," said lawmaker Kwok Ka-ki of the Civic Party.

In addition, a high-speed 26km railway project by MTR to link Hong Kong to southern China has been beset with problems. Scheduled to be completed in the third quarter of 2018, the project has been plagued by construction delays and budget overruns, which surged to HK$84 billion from an initial budget of HK$65 billion.

The project has come under fire for plans to build joint immigration checkpoints and detention rooms, with Chinese officials stationed in the heart of Hong Kong. This would appear to be a violation of Hong Kong's "one country, two systems" principle, which prohibits Chinese authorities from enforcing mainland laws in Hong Kong.

Despite the public backlash against MTR in Hong Kong, Jakarta MRT seems unconcerned. "We have yet to learn enough about this model as the cooperation is still underway," said Wicaksono. He said the problems associated with the property-and-retail model also reflect the fact that property prices in Hong Kong are high due to the shortage of land. Instead, "an immediate challenge of Jakarta MRT is to begin operating in 2019 successfully," he added.