SINGAPORE -- For IHH Healthcare, acquiring India's second-largest hospital chain was always going to be a headache.

Fortis Healthcare was losing money and mired in legal issues stemming from allegations of embezzlement by its two founders, the Singh brothers. Yet, the opportunity was simply too big for the Singaporean-Malaysian conglomerate to pass up.

The company, already one of the world's largest hospital players by market capitalization, is determined to grow in not one but two enormous yet underserved markets -- the second being China. It is also hatching growth plans closer to its own turf in Southeast Asia.

"This is a process that we constantly look at," Dr. Tan See Leng, IHH Healthcare's managing director and CEO, told the Nikkei Asian Review in a recent interview. "We have been planning this [expansion] for a long time, keeping in mind we cannot cannibalize our own home markets."

But while the prospects for Asian health care are bright, some analysts are warning investors to tread cautiously around IHH, partly due to question marks over the troubled Fortis.

IHH handles 15,000 hospital beds across 12 countries including Malaysia and Singapore, where it is listed and has market caps equivalent to $12 billion. Its top two shareholders are Japanese conglomerate Mitsui & Co., which owns a 33% stake, and Malaysian sovereign fund Khazanah Nasional, which holds 26%.

The group's reach extends to Europe, where it owns 90% of Turkey's Acibadem, which runs 22 hospitals spanning Turkey, Bulgaria, Macedonia and the Netherlands. Acibadem contributed about 27% of IHH's total revenue in the first quarter of 2019, second only to its Singapore business.

In the immediate future, though, the group has high hopes pinned on India.

IHH completed the Fortis deal in November, taking a 31.1% stake through a preferential allotment and becoming the single largest shareholder. To shore up the business, it immediately pumped in $567.1 million. IHH placed another $483.5 million in an escrow account to initiate an open offer to shareholders, aiming to obtain another 26%. But this money is in limbo, as the Indian Supreme Court put the offer on hold after Japan's Daiichi Sankyo accused Malvinder and Shivinder Singh of violating court orders.

The Japanese drugmaker has had a beef with the pair for a decade, since it agreed to acquire their family's company Ranbaxy Laboratories for $4.6 billion. Shortly before the deal closed, 30 Ranbaxy products were banned from the U.S. due to concerns about production standards. A Singapore tribunal later ordered the Singhs to pay Daiichi Sankyo $500 million in compensation.

Last October, an Indian regulator ordered the brothers and eight related companies to repay 4.03 billion rupees ($55 million) that was allegedly "diverted" from Fortis in a "fraudulent manner."

Fortis argues the judicial process should not be its problem, since the brothers are no longer with the company. Tan, meanwhile, insisted IHH remains committed to the offer, which he said would benefit minority shareholders.

At any rate, Tan added that the legal issues do not preclude Fortis' restructuring. He said IHH has already begun reforming the Indian company's board and day-to-day operations, aiming to reduce costs across its 29 standalone hospitals nationwide.

"We did not cut jobs, but we had to re-look at operations of the hospitals," he said. "We had a 100-day plan to execute. In time, we expect the Indian business to be our fourth main pillar after Malaysia, Singapore and Turkey." 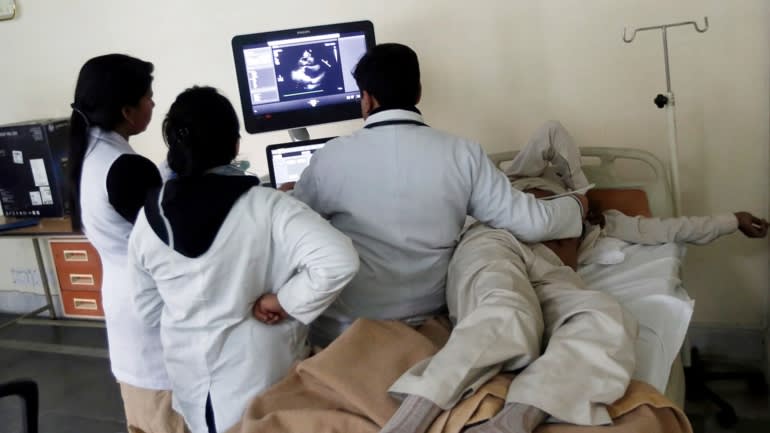 Ultimately, Tan wants to bring IHH's seven Indian hospitals under one umbrella with Fortis' 29, though this will require regulatory approval and is likely to take time. Tan also said IHH is in the process of selling noncore Fortis assets, jettisoning businesses in Mauritius, Sri Lanka and parcels of land throughout India.

Fortis' performance is showing signs of improvement. For the year ended March, it posted a consolidated net loss of $32.11 million compared with a $134.13 million loss the previous year.

Dr. Ashutosh Raghuvanshi, Fortis' chief executive, is bullish about working with IHH in the era of "Modicare," as the prime minister's insurance scheme is widely known.

During a media visit to Fortis Memorial Research Institute near New Delhi, he said the operator expects its average occupancy rate of around 66% to rise with the country's growing middle-income segment and increased awareness of medical insurance among the working class.

IHH brought Raghuvanshi, a veteran of India's hospital sector, into Fortis in March as part of the restructuring. He argued that higher demand, plus cooperation with IHH on everything from information technology to procurement, will be a winning combination.

"With that, we will have additional cost savings," he said. "So putting both cost savings and growing demand for quality health care together will take care of the profitability." Medical tourism is another opportunity, he said, predicting that the revenue contribution from international patients will surpass the current 11%. He noted that New Delhi is within easy flying distance of many countries that lack quality medical facilities, and that India's competitive pricing is attracting patients from across Africa along with Bangladesh, Nepal, Afghanistan and Central Asia.

Fortis caters to middle- and high-income patients, with ward rooms that can fetch thousands of dollars based on comfort and size.

While IHH attempts to unlock Fortis' potential in India, it is also establishing itself in China.

The group already runs Gleneagles Hospital in Hong Kong, and it is taking the brand to the mainland. In the west of the country, the Gleneagles Chengdu Hospital is expected to be operational by the end of the year, while Gleneagles Shanghai Hospital is to open in 2020.

Tan suggested these two hospitals will provide a springboard to explore more expansion in China. The group, he said, has received proposals to open facilities in Beijing, Guangzhou and Tianjin.

"In Chengdu, we are doing it on an operating lease model with an option to buy, while Shanghai is a greenfield project" first planned in 2011, the CEO said. 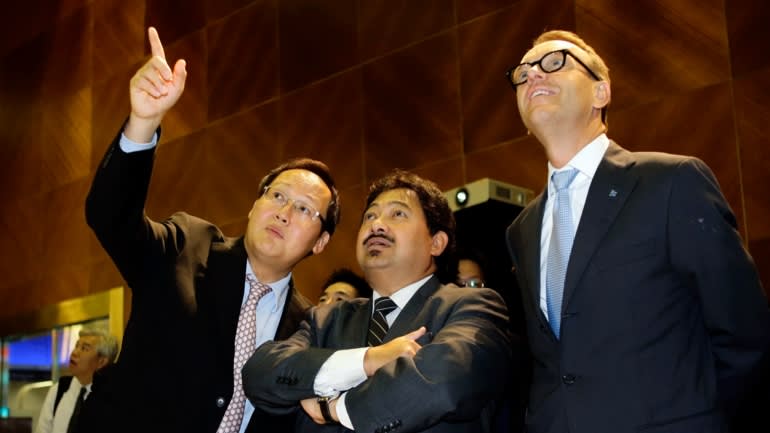 IHH Healthcare's Tan See Leng, left, attends the company's Singapore listing in 2012, which proved to be one of that year's biggest IPOs.   © Reuters

The 1.36 billion yuan ($189.7 million) Shanghai hospital will occupy a 35,754-sq.-meter site in the Shanghai New Hongqiao International Medical Center. IHH is investing in China through PCH Holding, in which it owns a 70.1% stake, with Chinese company Taikang Insurance Group holding the rest. The partners plan to jointly fund future projects in China in proportion to their shareholdings.

IHH is wary of wading in too deeply, too quickly.

Even as it strives to conquer two markets with well over 2 billion people combined, IHH still sees more room for growth close to its roots in Southeast Asia.

IHH was born out of two hospital operators, Singapore's Parkway and Malaysia's Pantai. Pantai built its first hospital in Kuala Lumpur in 1974, while Parkway entered the medical business in 1987 by acquiring Gleneagles Singapore.

The conglomerate says it is negotiating with potential partners to open medical centers in Indonesia, the Philippines, Vietnam and Myanmar, which would act as feeders for its hospitals in Singapore and Malaysia. 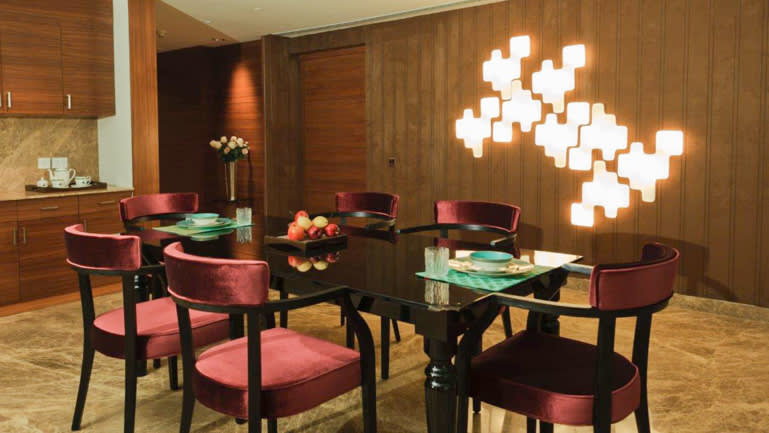 This room at an IHH hospital in Singapore is designed to resemble a hotel suite. (Photo courtesy of IHH Healthcare)

"We are looking at smaller medical centers in these countries," Tan said. "It would be a combination of greenfield and joint venture projects. ... Greenfield projects take a long time from conceptualization to break even. It takes at least 10 years."

One greenfield project in the pipeline is a 250-bed Parkway Hospital scheduled to open in Yangon in 2023, marking IHH's first foray into Myanmar.

Some analysts applaud IHH's growth drive, but others warn of the legacy it is inheriting from Fortis and trouble in Turkey, where a volatile lira has strained Acibadem. The group has pared down Acibadem's exposure to foreign currency debt by $250 million, to $400 million; by 2020, it intends to refinance another $50 million to $100 million.

Saffa Amanina, a research analyst at BIMB Securities, is skeptical.

She said IHH's near-term outlook is challenging for a number of reasons, including Acibadem's unfinished debt restructuring and the risk of higher interest charges upon conversion to lira. "On top of that, Fortis' consolidation and rejuvenation process, together with development of greenfield hospitals such as in China, may also lead to higher execution cost."

Amanina warned: "All of these projects have the potential to push back the time frame for IHH to recover its investments. As such, we believe inherent risks exist in the near term, and investors should exercise caution on the stock until earnings clarity improves."

Nabil Zainoodin of Malaysia's MIDF Research agreed that IHH faces short-term headwinds but believes the giant can rise to the challenge.

"Management has taken active efforts to reduce the lira foreign exchange impact while adopting a disciplined turnaround plan for Fortis," he said. Strong-cash-flow markets like Singapore and Malaysia will "continue to support the group's performance in the near term."

Nabil, who also gave IHH credit for its robust balance sheet and roughly $1.5 billion in cash, stressed that long-term growth opportunities in India and greater China will benefit the company.