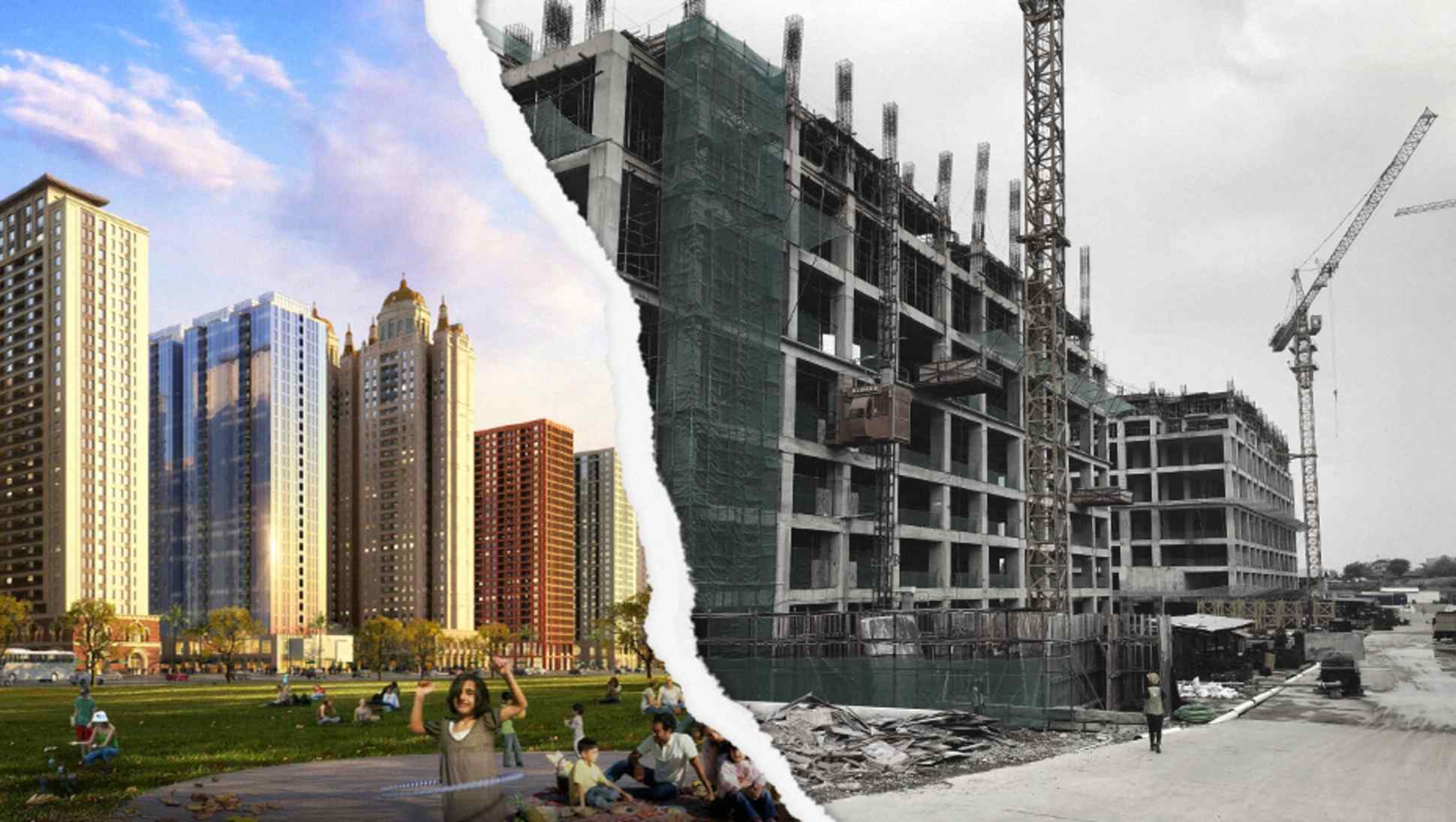 How Lippo's field of dreams could become a house of cards

JAKARTA -- The atmosphere inside the sleek Meikarta showroom outside Jakarta was muted. Gone were the crowds of eager buyers who, barely a month ago, had been hoping for a slice of the future city that has been widely touted as the "Shenzhen of Indonesia."

"Yes, there have been some cancellations [of residential units]," one salesperson admitted during a visit to the showroom in November. But, he added, "Sales are still strong and we've been able to meet our targets."

Customers have been scarce since Indonesia's Corruption Eradication Commission (KPK) on Oct. 15 arrested nine suspects in a bribery case involving the Meikarta future-city project, the flagship $21 billion development led by one of Indonesia's biggest conglomerates, Lippo Group. Four of those arrested were affiliated to the Chinese-Indonesian company, raising the pressure on a business already under severe financial strain.

Lippo Karawaci, the property subsidiary that owned companies in charge of Meikarta's development, had already been downgraded several times by credit rating agencies as its liquidity was stretched. Now those concerns risk being "exacerbated" by allegations that bribes were paid for building permits, according to Fitch Ratings.

While the investigation has gone relatively quiet, investor anxiety has not disappeared. The price of debt issued by two Lippo group companies in Singapore has plunged in recent weeks.

Meikarta -- named after the wife of Lippo founder Mochtar Riady -- is Lippo's biggest project yet, and formed "more than 90%" of the revenue at Lippo Cikarang, Lippo Karawaci's subsidiary, according to an analyst who asked not to be named. Lippo has recently de-consolidated Meikarta from its books, but the fear is that should the mega project fail, it could deal substantial reputational damage to the conglomerate. The signals from the showroom in early November were not encouraging. The recent cancellations suggest that some potential purchasers fear they might be buying into a house of cards, rather than the clean, affordable housing that was promised for ordinary Indonesians desperate to escape the crowded conditions of Jakarta proper.

Many banks are staying away from Meikarta, refusing to extend mortgages to the project. Signs in the showroom still advertise mortgages from Bank CIMB Niaga, but the only loans available are from Nobu Bank, according to the salesperson. Nobu is part of the Lippo Group.

Outside, in the project's Central Park, the scores of huge colored balloons emblazoned with Meikarta's signature "M" that once populated the area have seemingly all disappeared.

Shortly after Lippo Group announced the Meikarta project in May 2017, an Indonesian public that loves Marvel Comics superhero films jokingly called it the "Wakanda of Indonesia," likening it to the futuristic city of the same name from "Black Panther," a 2018 action film. Indonesia's Wakanda was set to house at least 250,000 residential units -- along with state-of-the-art facilities like malls, hospitals, office and residential towers ,research centers, universities, five-star hotels and a massive park.

But in late 2017, there were already allegations that construction had begun before permits had been issued.

Potential buyers were satisfied. It seemed inconceivable that Lippo, one of the country's biggest property developers, could do something as foolish as failing to secure permits -- especially considering the high-profile marketing campaign.

But Meikarta, run by Mahkota Sentosa Utama, which until the first quarter of this year was wholly owned by Lippo Cikarang, was then embroiled in other allegations, this time concerning unpaid bills. 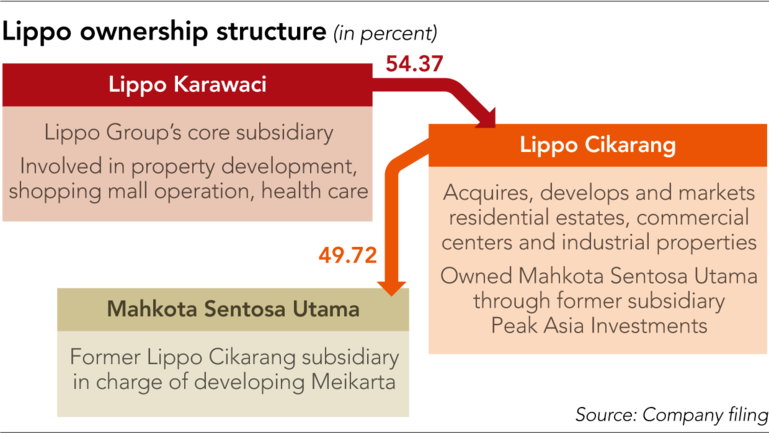 The charges seemed to come from all directions. About 400 employees staged a protest in April, claiming they had not been paid in three months. In May, a similar problem surfaced when a troubling letter from project contractor Total Bangun Persada to its subcontractors was leaked online. The letter ordered the companies to suspend certain work. Although the reason for the stoppage was not divulged, there were rumors it was related to delinquent payments.

Meikarta was hit with another bombshell the same month. Two companies, Relys Trans Logistic and Imperia Cipta Kreasi, sued Mahkota for unpaid advertising bills. The project had unleashed a massive promotional campaign, costing more than 1.5 trillion rupiah in 2017, according to Nielsen. It was Indonesia's costliest campaign that year.

Mahkota was eventually exonerated, however, with the court ruling that there were no contracts between the parties. "The documents submitted by the applicant are suspected of being fictitious or fake, legally flawed, not a valid bill," read a statement from Mahkota at the time. Mahkota "guarantees that vendors who have complete and legal documents need not worry," it added.

The two companies and the lawyer who helped represent them could not be reached for comment.

An industry insider noted that the accusations of unpaid bills may actually point to a larger problem within Lippo: that the giant is running short of cash -- in Meikarta's case, due to a dwindling flow of Chinese funds.

A person familiar with the project said that Meikarta was initially a joint venture between Lippo and Chinese developer Homnicen Group, with the Chinese side leading the development. But "a few problems emerged," according to the source, leading Lippo to increase its control.

The "problems" may have stemmed from Lippo's partner being strapped for cash due to China's tighter capital controls. Lippo Karawaci did not responded to emails for comment at the time of publication.

Even before the project got off the ground, there were concerns over Lippo Group's finances. Lippo Karawaci, the parent of Lippo Cikarang, has been selling off assets to Singapore-based affiliates to meet operating cash flow and interest payments over the next few years. Additionally, two Lippo Group companies that provide mobile networks are in danger of having the government revoke their licenses after failing to pay rental fees dating back to 2016.

Lippo has been quick to dispel rumors that Meikarta is not going according to plan. In September, it claimed to have handed over 863 apartment units in the township. However, the units are believed to be mostly from Orange County, a project between Lippo and Japanese trading company Mitsubishi Corp. that was initially separate from Meikarta but has since been folded into it. 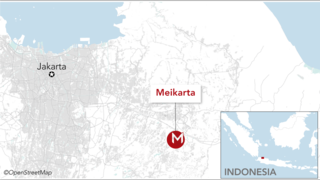 Although the two scandals over delinquent bills did not have much impact on Meikarta, the fallout over the bribery allegations could be devastating if it leads to a slowdown in sales.

"Meikarta units were being sold before construction began, with proceeds used to fund construction," said Shin Furuhata, senior manager at real estate services company JLL Indonesia. "If there is a problem with sales, [Lippo] might not be able to raise funds for construction, and development could stop." Furuhata stressed that the views were his own and not necessarily those of JLL.

There is a public perception that bribes are just part of doing business in Indonesia's property development sector. Industry observers believe that the anti-corruption watchdog KPK wanted to make an example of Lippo, putting other developers on notice that if it could take down the huge conglomerate, it could take down anyone. Lippo denies any wrongdoing.

But the company's approach when launching the project may also have played a part in drawing official disapproval. According to a person close to the situation, Lippo failed to make "the necessary background arrangements before announcing the project." The then-deputy governor of West Java Province, where Meikarta is located, reportedly knew nothing of the development until ground was broken. Such indifference by Lippo is believed to have infuriated some officials.

Lippo Cikarang ceded control of Mahkota, as revealed by its financial statements for the first half of this year, released in October. This will allow the group to separate losses incurred by the struggling project from its consolidated results. 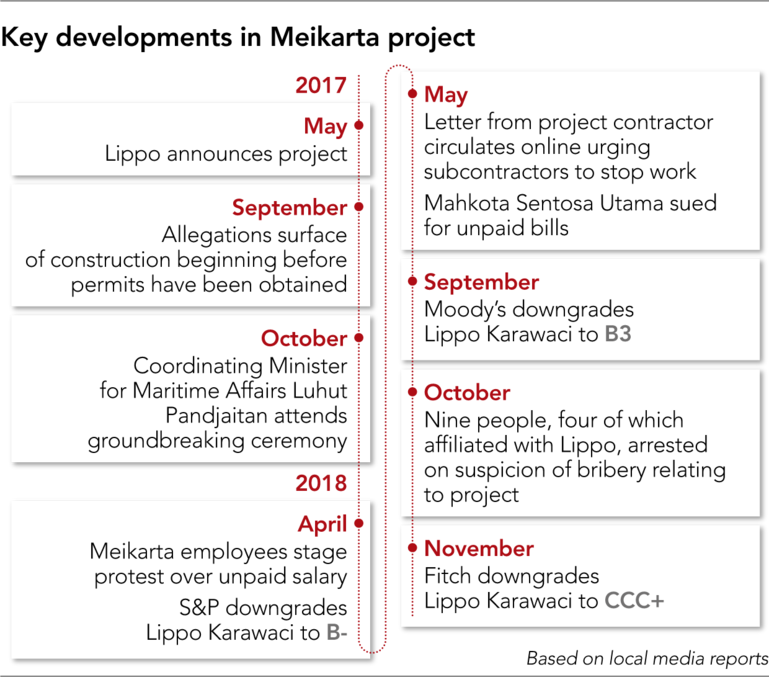 Many in the industry expect that even if the permits are found to have been illegally obtained, they will not be revoked and the project will continue. But Lippo's once sterling reputation will have lost much of its luster.

Meanwhile, the bribery investigation is steadily proceeding. The KPK has identified those it believes to be responsible for backdating some project permits according to local reports, and continues to call people in for questioning. Until it concludes, the controversy will haunt Lippo - and Meikarta's subdued showrooms.

Nikkei staff writers Wataru Suzuki in Tokyo and Bobby Nugroho in Jakarta contributed to this article.