Kalbe's 3,800-sq.-meter factory in East Jakarta now produces 13 drugs for chemotherapy, including 10 anti-cancer and three support medications. Half can be used to treat breast cancer, the most common cancer in Indonesia and the one blamed for the most deaths among women.

The strategy behind the factory is simple: Focus on the second leading noncommunicable cause of death among Indonesians after cardiovascular problems. Kalbe's oncology line offers treatments for several kinds of cancer, including the most prevalent here: breast, lung, colorectal and cervical.

The recent results are impressive, according to Kalbe director Vidjongtius. "Sales [of cancer drugs are] growing more than 10%, better than Kalbe's other drugs," he said. From its beginnings in a garage in Jakarta in 1966, Kalbe now has annual revenue of 17.8 trillion rupiah ($1.3 billion) and 30 subsidiaries. The group runs 11 factories -- including one in the Philippines and another in Nigeria -- and has more than 16,000 employees.

Its founder, Boenjamin Setiawan, steered it into a new age of innovation in 2007 with an initial investment in stem cell research. In 2008, his niece, Irawati Setiady, took over as president. Under her, Kalbe has been experimenting to find ways to become an innovation-driven drug developer as well as to expand across the Asian marketplace.

The company's overall net sales for the six months ended in June grew about 10% to a little more than 9.55 trillion rupiah ($732 million), with net income attributable to its shareholders increasing 8% to 1.17 trillion rupiah.

As Kalbe enhances its product portfolio, the administration of Indonesian President Joko "Jokowi" Widodo is pushing to provide better health care to every citizen. The government is gearing up its universal healthcare program and intends to cover the country's projected population of 270 million by 2019, a leap from the 170 million currently covered. This year for the first time, government expenditures on health care reached the legally mandated 5% of the state budget. Health care spending is expected to grow 12% every year through 2020.

On the other hand, government policy is making things difficult for the company's mainstream generic prescription drug business. Government-set price caps on generic drugs are suppressing revenue and profit margins. Kalbe's overall prescription drug sales grew 5.4% in the first half of this year, slower than Kalbe's three other business lines -- consumer health (over-the-counter drugs and energy drinks), nutritionals, and distribution and logistics.

In the current half, "[the poor prescription performance] is partially mitigated by a stronger rupiah and the introduction of higher-margin oncology products," Nomura global investment bank said in a recent report.

Even if generic prescription sales recover, however, Kalbe's aspirations will remain unfulfilled.

There are more than 200 drugmakers in Indonesia, the majority of which are local companies that typically produce only low-margin generic substitutes of brands licensed from multinationals. While they control 95% of the market by sales volume, they have a combined 75% share in value terms. The fewer multinationals operating in the country have been able to reap more profits because of their focus on high-value products. "Everybody can produce generics, so they [Kalbe] do need to develop something different," said equity analyst Elvira Tjandrawinata of Nomura. "Products like the oncology drugs can be their competitive edge; not many companies here can produce something like that."

Indeed, Kalbe is trying to depart from the typical Indonesian way of doing business. It wants to have its own innovation footprint. Stem cell research is part of its plan, in addition to oncology.

Kalbe is investing in stem cell research -- an emerging area for treatment of many diseases, with a special focus on therapies for degenerative maladies.

Kalbe's founder, Boenjamin Setiawan, founded the Stem Cell and Cancer Institute in 2007, with a vision that Kalbe would someday become a leading producer of stem cell products in Asia.

"We could have chosen raw materials as our R&D focus, but we're already quite left behind in this area -- mainly [by] India, and also China," President Setiady said in a televised speech in January. "The emerging area for research is currently stem cells. And we thought, we should not be left behind anymore. That's why we founded SCI 10 years ago."

Stem cells are "mother cells" with the potential to develop into many different kinds of cells in the body. They have a characteristic ability to self-renew, thus serving as a repair system in the body. In stem cell therapy, the basic idea is to implant these cells in a damaged organ of a patient so that it may heal itself.

SCI Director Sandy Qlintang told the Nikkei Asian Review that the institute has managed to produce autologous transplants, in which stem cells are harvested from the patients themselves, usually from their bone marrow or fat tissue. SCI has been partnering with several university hospitals in Indonesia to provide this treatment for spinal cord injuries, osteoarthritis and other maladies.

SCI, though, has been trying to develop stem cells that can be mass produced by collecting stem cells from young, healthy individuals for use in the treatment of ailing patients. These are called allogeneic stem cells.

"We're preparing to conduct the preclinical study on animals next year. And then we'll start clinical trials on humans in 2018," Qlintang said in a recent interview. "We're planning to market this product in Indonesia, and perhaps also a few other Southeast Asian countries."

For that, he added, the product must pass three-phase clinical trials on humans -- a six- to seven-year process costing at least 40 billion rupiah ($3.1 million). SCI will have to report results of the tests to Indonesia's Food and Drug Monitoring Agency before the agency might approve the product to be marketed in Indonesia. It is planning to partner with some other pharma companies in Asia -- perhaps from Malaysia and South Korea -- to similarly obtain marketing approval from drug authorities there, Qlintang said.

The stem cell product will be Kalbe's first attempt at fulfilling the Food and Drug Monitoring Agency's clinical trial review on its own. The company has engaged in some clinical trials before, but with more experienced foreign partners such as the National Cancer Center of Singapore, according to the SCI director.

For decades, Kalbe had engaged in mergers and acquisitions that targeted smaller local companies to help expand its consumer health and nutritionals divisions. Now, finding experienced partners willing to share their technology is the key to the company's high-technology and high-value-product approach, director Vidjongtius said. "We can of course try to build on our own, rely on our internal capacity, let the research and development team continue with trial and error," Vidjongtius said. "But that would take years." The company is therefore on a hunt for "strategic" foreign partners that can lend expertise in specialty products, planned lines of prescription drugs that can only be made with sophisticated technology. Like the oncology drugs, these products offer higher margins. Significantly, a lack of generic substitutes in Indonesia means no government-set price ceilings.

Companies in South Korea and China are increasingly open to collaborations, Vidjongtius said, because Kalbe offers a strong distribution network and reliable access to the pharmaceutical market of the world's fourth most populous nation. The director said Kalbe has $115 million set aside for future strategic collaborations.

Kalbe launched its strategic partnership policy with the oncology factory, which is a collaboration with South Korea's Samyang Biopharm Pharmaceutical.

As operations there have proceeded smoothly, Kalbe last year inked a partnership with another South Korean drugmaker, Genexine, which has expertise in biopharmaceutical technology -- a branch of pharmaceutical development that focuses on biological sources.

The new partnership prompted the construction of a biopharmaceutical factory on the outskirts of Jakarta, which kicked off earlier this year. It is expected to begin commercial operations in 2018, with only one product planned so far: erythropoietin, a hormone treatment for special cases of anemia resulting from kidney failure and cancer treatment.

Kalbe and Genexine also have established a research unit tasked with developing "new innovative biologic drugs" that will be made at the factory, the company said on its website.

Kalbe has high hopes for the new partnership. 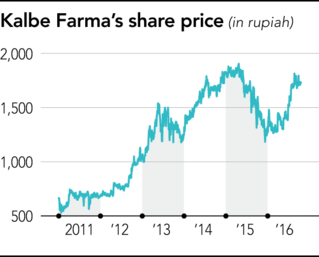 "Through the formation of the joint venture company, Kalbe is gaining access to a wide range of next generation therapeutic proteins, access to advanced countries such as Australia and Taiwan, and greater footholds in ... ASEAN and Indonesia," it added, referring to the Association of Southeast Asian Nations.