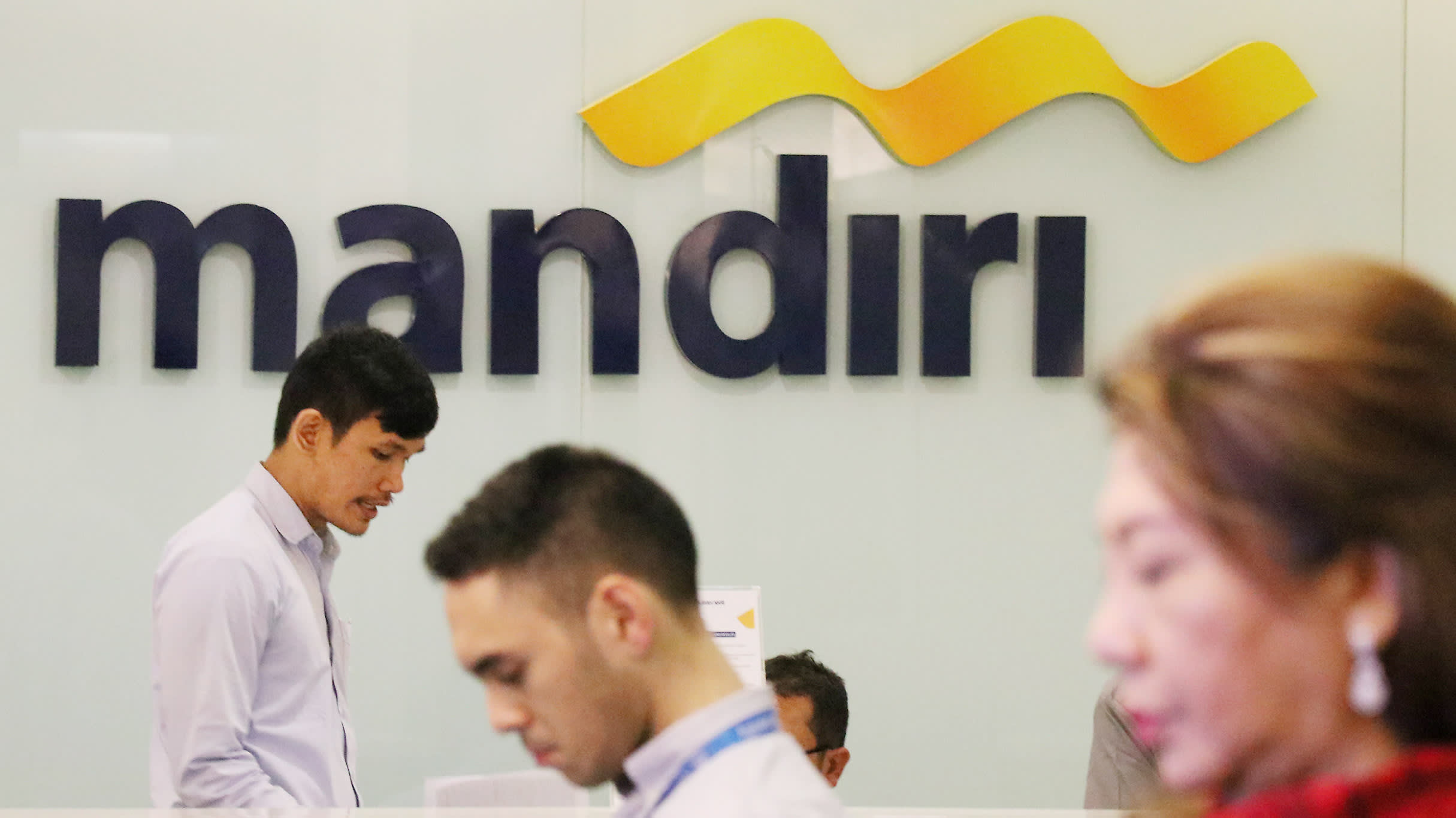 Bank Mandiri was established in 1999 by a merger of four troubled Indonesian lenders hit by the Asian financial crisis. (Photo by Shinya Sawai)
Company in focus

JAKARTA -- As president of Indonesia's Bank Mandiri, Kartika Wirjoatmodjo has spent most of the past two years tackling a mountain of bad loans that has squeezed the state-owned lender's bottom line and hampered expansion plans overseas.

The grueling efforts, led by the 44-year-old former consultant at a U.S. firm, paid off when Mandiri reported on Feb. 6 a 49% increase in net profit for 2017 to a record high of 20.64 trillion rupiah ($1.52 billion). He is now gearing up for a growth strategy to realize the company's vision of transforming Indonesia's biggest bank by assets into Southeast Asia's largest.

"In the next one to two years we still have to focus partly on the level of nonperforming loans," Wirjoatmodjo told the Nikkei Asian Review in an interview held on the sidelines of the bank's annual investment forum in Jakarta the day after the earnings report. "But we will also put more energy, 70-80% of energy for future growth," he said.

The upbeat comments come against the backdrop of an industry in recovery. Indonesian banks saw their nonperforming-loan ratio creep up to 2.9% in 2016 -- higher than Singapore, Malaysia and Thailand -- after years of falling commodity prices. But the economy is finally improving.

Strong exports and investment helped the country's economic growth increase slightly to an expansion of 5.07% in 2017 compared with the previous year. Expecting the momentum to accelerate, the government is targeting 5.4% growth this year. At the same time, Wirjoatmodjo knows that it will take much more than riding the commodities wave to grow in a rapidly changing industry.

While banking in Indonesia still means officers traveling on minivans and boats to reach far-flung regions, it is quickly catching up to a new era of digitalization and open competition.

The efforts of the sharp-suited, rapid-fire speaker -- a lawmaker told Wirjoatmodjo to "please speak more slowly" at a recent parliamentary session -- may shape the course of the country's broader reform of state-owned enterprises. He joined Mandiri in 2015 as director of finance and strategy, and was elevated to president the following year.

Indonesia's banking industry is fragmented, with 115 banks spread across the archipelago. Total assets stood at 7,387 trillion rupiah ($537.3 billion) as of December 2017, lower than Singapore's top two  banks combined. Yet, Indonesian banks have been enjoying the highest profitability among their Southeast Asian peers, thanks to robust demand for credit and limited access to capital.

Mandiri, established in 1999 by a merger of four troubled Indonesian lenders hit by the Asian financial crisis, was one of the largest beneficiaries. As Indonesia's economy recovered in the subsequent years, it rapidly expanded its corporate loan business. "In order for us to disrupt in fintech, we need to work with people who are in the ecosystem," Bank Mandiri President Kartika Wirjoatmodjo ​told the Nikkei Asian Review​. (Photo by Takaki Kashiwabara)

But loan growth has slowed down to single digits in recent years. Meanwhile, Indonesia's credit rating has improved since Indonesian President Joko Widodo took office in 2014, enabling companies to raise funds from capital markets at low costs. Wirjoatmodjo is under fresh pressure to build new sources of income.

"As Indonesia's government pushes for financial inclusion, the [net interest margins] will have to reduce," said Marcus Chua, a banking analyst at Nomura. "So the question is ... what are the banks doing to grow other forms of income when the yields on their assets are coming down?"

Competition and falling interest rates, driven by the central bank's two policy rate cuts last year, have already begun eating into Mandiri's profits. Its net interest margin -- the difference between what banks earn on loans and what they pay for deposits -- fell 0.57 percentage points to 5.87%, the lowest level in four years. In fact, Mandiri's interest income was up only 0.6% last year; the jump in profit was mostly due to a large reduction in loan provisioning costs.

One way to cushion the pressure on margins is expanding its micro- and consumer-lending businesses, which are generally more profitable than lending to large corporations. In mortgages, Mandiri has been strengthening relationships with its corporate clients from the top down. For example, it has offered favorable loans to Sinar Mas Group, the real-estate to paper conglomerate, in exchange for a slice of its real-estate loans. 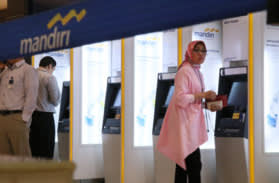 Only 36% of Indonesia's adult population had a bank account as of 2014, according to the World Bank. (Photo by Shinya Sawai)

Wirjoatmodjo has also said he is considering an initial public offering of the bank's auto financing unit, Mandiri Tunas Finance. The bank is targeting to increase consumer loans from 15.5% of its total loan book in 2017 to 19% by 2020.

A longer-term strategy is targeting Indonesian money parked overseas. This month, the bank is planning to launch an asset management business in Singapore, where Indonesians have declared more than $50 billion in previously unreported assets during the government's tax amnesty program that ended March 2017. Mandiri upgraded its business in the city-state last year, when its brokerage arm officially began operations.

"We have a structural challenge," Wirjoatmodjo said. "The loan-to-GDP ratio is low but growth in third party funds is not high. So part of our GDP and cash flow is not coming to onshore banks." 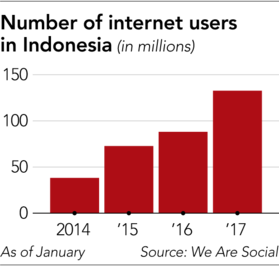 Wirjoatmodjo's diversification -- one executive from a rival bank calls it a "supermarket strategy" -- signals a break from past traditions, in which the government gave state-owned lenders specific roles in the economy.

Bank Rakyat Indonesia dominates the lucrative micro-lending business, while Bank Tabungan Negara specializes in mortgages. Bank Negara Indonesia was designated to facilitate foreign-currency transactions as Indonesia's presence in the world expanded. But times are changing, and Mandiri is eager to depart from its focus on corporate banking.

Banks are not the only competitors that Wirjoatmodjo is dealing with. A new wave of financial technologies is transforming the industry.

Banking in Indonesia, a sprawling archipelago of 17,000 islands, is underpenetrated, with only 36% of the adult population with a bank account as of 2014, according to the World Bank. Some surveys show that more than half of the population is now connected to the internet, suggesting that mobile phones can reach more customers than brick-and-mortar branches.

Go-Jek, which runs an on-demand smartphone app that lets users pay for motorbike taxis and meal deliveries with an in-app electronic wallet, says it facilitates more than 100 million transactions each month. Wirjoatmodjo, who previously was with the Boston Consulting Group, sees windows of opportunity in boosting efficiency. For example, Mandiri began piloting a new type of branch that replaces tellers with machines and trains the spare personnel to become sales people who pitch products to new customers. He calls them "fox hunters."

"We want to convert people in branches from servicing to sales," he said. "We hope with that we don't have to have to do retrenchment or voluntary severance." The bank piloted 160 branches in 2017 and plans another 400 this year.

Mandiri has also been active in investing in fintech startups, setting up a venture-capital unit in 2015.

"In order for us to disrupt in fintech, we need to work with people who are in the ecosystem," said Wirjoatmodjo, citing Go-Jek as an example. He warns, however, that Mandiri's aim is to work with startups, not become one.

"We can provide products, which is more profitable. Bear in mind that most [startups] are still not profitable."