A shopper walks through a forest of socks and myriad other products at the Mega Don Quijote store in Tokyo's Shibuya district. (Photo by Ken Kobayashi)
Company in focus

TOKYO -- In a country known for impeccable manners and minimalist design, Japan's Don Quijote discount retailer is the rebel, the noisy neighbor, the ugly duckling. In an era of smartphones and one-click shopping, it is proof that bricks-and-mortar is not dead.

Like Amazon.com, Don Quijote has perfected the art of delivering what customers want -- and what they didn't know they wanted. But unlike the giant e-tailer, it does so through physical stores that assault the senses with a "jungle" of products as dense as the Amazon rain forest.

Shoppers can lose themselves between piles of Pokemon toys, wireless earphones, food, gag gifts and Prada wallets -- all crammed into impossibly tight spaces and punctuated with garish displays of flowers, loud music and even fish tanks.

The formula appears to work. In a Japanese economy that suffered two lost decades, its revenues have never declined.

And now, the company behind this retail oddity affectionately known as Donki is taking its unique brand of chaos to new markets across Asia.

After opening its first store in Thailand in February, the chain is planning two more in Singapore in May, followed up by Hong Kong in July. There are also plans to introduce the brand to Taiwan, while the Philippines and Malaysia are on the map as well -- although no final decision has been taken.

PPIH's global ambitions were made abundantly clear last October when it announced its name change from Don Quijote Holdings. Founder Takao Yasuda came out of retirement to rejoin the board in February to help the company take on the world.

Yet retail models are notoriously difficult to export. Some industry watchers question whether Donki's novel brand of retailing and focus on Japanese products will be compelling enough to attract frequent repeat visitors overseas. "Donki is not somewhere that people go shopping every day," said one retail consultant who preferred to remain anonymous. 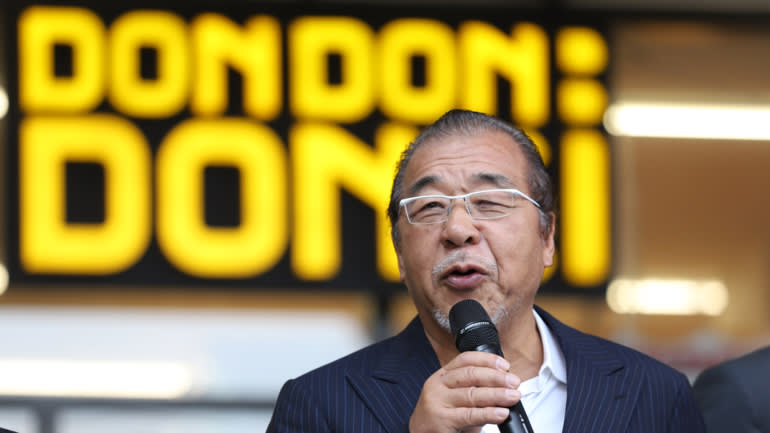 But PPIH has a history of defying expectations. Since the first Don Quijote opened in 1989, the group has achieved continuous sales and operating profit growth. Net profit reached 36.4 billion yen ($325 million) for the fiscal year ended last June. For the current business year, sales are expected to reach 1.37 trillion yen.

"Our motto is to make people excited," said the manager of the Mega Don Quijote Shibuya Honten store, one of the chain's larger locations, in the Tokyo district famous for its "scramble" crossing. Visitors wander the seven labyrinthine floors, ducking under hats hanging from the ceiling.

Ohara has said a visit to Donki "should be like a live musical performance," as opposed to impersonal e-commerce.

"I go into the store whenever I walk past," said a 21-year-old woman. "It's cheap, and I visit without knowing what I want to buy." 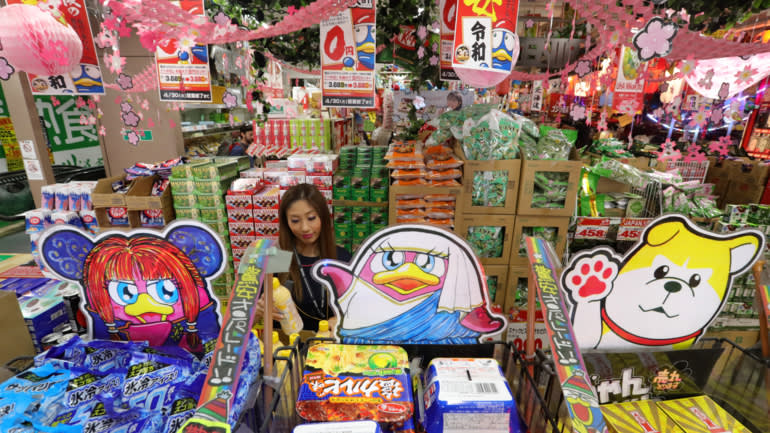 For many tourists, Donki is a destination in its own right. "I've heard a lot about the store," said Jen Enanod, who was visiting Japan from the Philippines. "It's cheaper than other stores, and has a complete line of products." It's also open 24 hours, and is generally busiest from 10 p.m. to 1 a.m.

The operator has actively courted travelers, introducing China's UnionPay credit card as early as 1998 and targeting tourists with ads and coupons. One could hardly have imagined such an empire when Yasuda opened a small discount shop in 1978. Described by one analyst as a natural-born merchant who is "never satisfied with how things are going," Yasuda had no retail experience when he started.

To keep his store going, he developed a knack for obtaining discontinued models and samples that manufacturers and dealers would otherwise discard. Tellingly, his shop was called Dorobo-ichiba or "thief shop." Yasuda eventually switched to a wholesale business, before returning to the discount retail game with Don Quijote in 1989.

Much like the character Don Quixote in the classic novel, the retailer has followed its own path. Unlike many retail chains, each store has significant power over what it sells. Roughly 40% of sales are generated by products procured by individual stores, while the rest are procured by the company. The stores might cater to local preferences, or simply push whatever merchandise they can obtain at low cost.

This approach allows the chain to generate profit despite steep discounts, sometimes as much as 90%. It also means customers are likely to find something different every time they visit a Donki store.

Donki staff, too, have their own territory within the stores. They have considerable say over the product lineups and are paid according to the performance of their section. This motivates workers to come up with creative displays and handwritten advertisements.

Mitsuo Takahashi, PPIH's senior managing director and chief financial officer, has said the company needs to expand overseas because of the limited growth prospects at home.

PPIH significantly increased its domestic scale recently, with the acquisition of FamilyMart Uny Holdings' 60% stake in supermarket group Uny in January. Uny runs nearly 200 general merchandise stores in Japan. FamilyMart Uny took a small stake in PPIH, according to regulatory disclosures and will now be PPIH's partner for expansion in Taiwan. According to Jefferies analyst Michael Allen, overseas expansion is the logical next step for Don Quijote after the Uny deal.

In February, CEO Ohara said he aims to open 100 stores each in the U.S. and Southeast Asia, without giving a specific time frame. Takahashi suggested the goal is feasible by around 2030.

PPIH entered the U.S. in 2006, when it acquired the American operations of financially strapped Japanese general merchandise retailer Daiei. The original plan was to buy Daiei's stores in Japan, but the company decided the future was brighter in the U.S.

The group went on to acquire local supermarket businesses Marukai and QSI, giving it a total of about 40 stateside locations.

Yasuda has had his eye on Asia for years. Well before the first Don Don Donki opened in Singapore, he set up an office there in 2013. The city-state "is an Asian hub with a high degree of business freedom," the founder wrote in his autobiography published in 2015, expressing his ambition to open stores all over Southeast Asia.

Sounding like someone who was in no rush to retire, Yasuda wrote, "I want to watch over and back up Don Quijote from a global perspective from now on."

In Southeast Asia and East Asia outside Japan, the initial stores will be operated by PPIH, either on its own or through partnerships with local companies, according to Takahashi. The group intends to invest up to about $9 million per opening, aiming to recoup the expenditures within four years.

Over the longer term, he said, PPIH plans to boost the store count through acquisitions and franchising.

In a break from its strategy in Japan, PPIH is focusing heavily on food overseas. At the new Thailand store, food accounts for more than 80% of sales, compared with around 30% at most Japanese locations and roughly 55% at Mega Don Quijote.

Profit margins on food are not necessarily higher. But the company has its reasons: Food is relatively immune to competition from e-commerce. It offers a better chance of attracting repeat customers than, say, electronics. And "food is suitable for demonstrating Japanese quality," Takahashi explained. Food accounts for 80% of sales at Don Don Donki in Bangkok. (Photo by Kosaku Mimura)

The company hopes to give travelers a taste of Japan in their own countries. "I want to sell what Thai people enjoyed eating [when they traveled to Japan] for similar prices in Thailand," Yasuda said at the opening ceremony for the Bangkok store. Japanese products in Singapore and Thailand, he noted, "are three times or more expensive than in Japan, which is so stupid."

The chain hasn't completely solved the price problem. Seventy percent of the products it sells in Bangkok are imported from Japan and cost anywhere from 30% to 50% more. Takahashi stressed Donki sells Japanese products for about half the prices of other stores in Thailand or Singapore, but there is no denying they cost more than local goods.

Nevertheless, the Donki name has a certain magnetism.

"I know Donki -- I learned about it when I traveled to Japan," said 42-year-old Buonyanuch Buaban as he visited the Bangkok store. "I like Japanese snacks, so I came to buy snacks and bakery items."

Takahashi said the company is zeroing in on urban locations where incomes are relatively high. So far, the overseas business has been profitable, generating an operating profit of 1.48 billion yen for the year ended June 2018.

But as the chain ventures into new markets, it will need to prove it can adapt. "Local demands vary, especially for food retailers," said Dairo Murata, senior analyst at J.P. Morgan Securities Japan.

Donki stores could also face tougher price competition from other Japanese retailers overseas. "There are now many other department stores or Japanese brand shops that are priced not much differently," one Bangkok resident said, referring to players like Matsumotokiyoshi, UFM Fuji Super and Muji, all of which sell items from Japan.

One industry expert questioned the true extent of demand for Japanese food.

Ohara envisions international sales accounting for 30% of total revenue. Jefferies' Allen said that if PPIH is to reach that target, "it is hard to see them only being about Japanese food."

Still, just as shoppers never know what they'll find on Donki's chaotic shelves, industry watchers think the retailer could surprise on the international scene. In a few years, Allen said, "it could be anything."