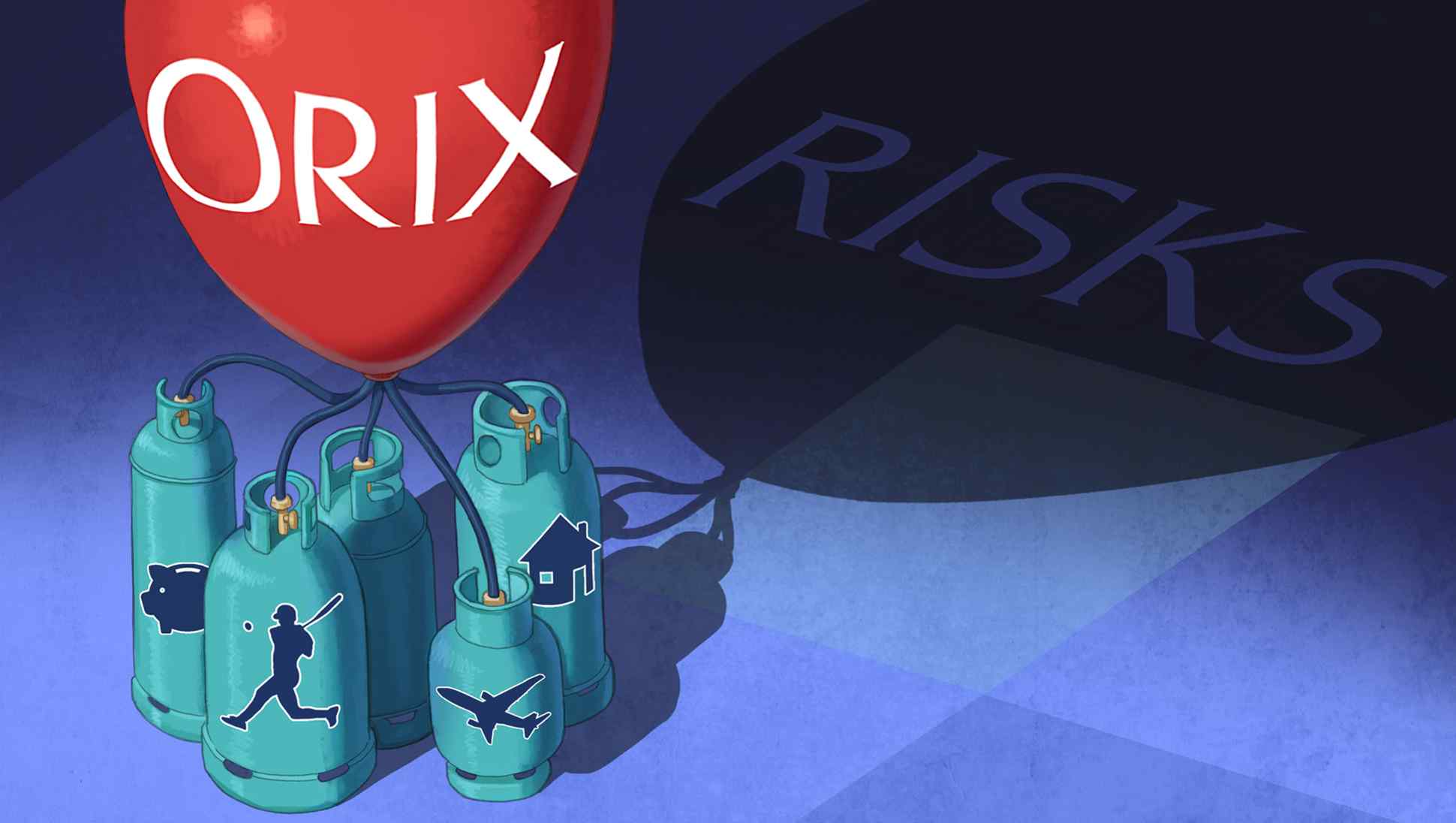 Orix is a sprawling conglomerate with businesses ranging from aircraft leasing to aquariums, banking to real estate. (Illustration by Daniel Garcia)
Company in focus

Japan's Orix runs into headwinds in quest for growth

TOKYO -- Orix was one of Japan's first leasing companies, a trailblazer in the country's financial markets, known as a consummate risk-taker. But Hitomaro Yano, Orix finance officer, admits that sometimes even a company that has delivered more than 50 consecutive years of profits can get things wrong.

Late last year the investment group was forced to take a $100 million hit when its affiliate Infrastructure Leasing & Financial Services, one of India's biggest nonbank finance companies, defaulted on loans. The crisis sparked such turmoil in India's financial system that the government was eventually forced to take control of IL&FS to avert wider contagion and this month several former directors were charged with fraud.

In hindsight, says Yano, Orix and other big shareholders had failed to provide strong leadership, leaving IL&FS with weak governance. "We should have chosen either to get more involved in the management or exit the investment altogether."

Yano's admission comes as investors raise concerns over the group's strategy, its complex portfolio of investments, and the threats posed by rising global volatility and a possible credit downgrade. From last year's peak, Orix shares are down more than 20%.

The publicity that came with the IL&FS crisis put the normally discreet company under the spotlight. A sprawling conglomerate with businesses ranging from aircraft leasing to aquariums, banking to real estate, Orix is best known in its own country as the owner of the Orix Buffaloes baseball team that produced Major League Baseball star Ichiro Suzuki.

For those in the know, however, Orix is often compared to Japan's tech investment powerhouse, SoftBank Group, or GE Capital of the U.S. Its balance sheet of 12 trillion yen ($107 billion) gives it substantial firepower, backed up by a workforce of some 32,000 people in 38 countries. Unlike SoftBank, however, there is no single dominating figure like CEO Masayoshi Son to grab the headlines. Instead, Orix is run by a team of investment managers. And, unlike GE Capital, it operates far beyond finance. Since its foundation in 1964, Orix's strategy has been to invest in sectors undergoing deregulation, such as banking or finance. It also aims to be an early investor in niche markets, where big players are not yet present.

Orix's appetite for risk sets it apart from its Japanese peers. Where SoftBank's Son has been willing to pay a premium for stakes in promising companies, Orix is happy to take advantage of market distress, as it did last year. In one of its biggest-ever deals, it spent $2.2 billion to buy a 30% stake in Ireland's Avolon Holdings from heavily-indebted Chinese conglomerate HNA Group. It is now the world's third-largest aircraft leasing company,

This strategy has worked well in developed countries like Japan and North America, but been less successful in emerging Asian markets.

At about the same time as the IL&FS crisis was unfolding, Kansai International Airport in western Japan, which Orix operates with Vinci Airports of France, was hit by a major typhoon. The storm revealed some fundamental, longer-term problems with the airport's infrastructure, with some of the cost likely to fall on the operators.

In August, S&P Global Ratings questioned Orix's acquisition strategy, cutting its outlook on the company's A minus debt rating from stable to negative. "Its recent acquisitions are expected to increase its overall business risk," S&P said. These purchases included the Avolon stake along with the acquisition of U.S. structured financing company NXT Capital.

The ratings agency added that "the company's continuous global expansion requires more foreign-currency funding, which may affect its financial profile during market downturns."

The negative outlook indicates a more than one in three chance that S&P will cut its debt rating for the company to a BBB rating, which would likely hamper Orix's funding and investment operations.

The prospect of a downgrade comes at a potentially awkward time for the company. Having sold 30% of Avolon to Orix, HNA is now believed to be looking to sell its remaining 70% stake. Orix has made no secret of its interest. The Japanese group has remained noncommittal, however, apparently because of concern over the global economy and that another big purchase could potentially affect its credit rating.

At the same time, Orix's desire to stay discreet has weighed on its stock price. Investors have voiced frustration over the company's lack of visibility, as well as the complex nature of its operations.

"Investors are looking at the quality of its profits rather than the amount of its profits," said Shinichiro Nakamura, bank analyst at SMBC Nikko Securities. According to his analysis, about 30% of Orix profits are market-driven, such as capital gains. Investors tend to discount such profits when the financial markets become volatile, Nakamura said.

Like any investor in distressed assets, Orix tends to operate in relative secrecy, so that its strategies cannot be copied or front-run by other companies, Nakamura added. This makes Orix's investments difficult to assess, he said.

Orix for its part argues that it has been managing market risks for decades. And there are those who seem to share that view. "Growth is the name of the game," says Yoshihiko Miyauchi, one of the Orix founding members and former CEO. (Photo by Yuichiro Takagi)

Fitch Ratings maintains a stable outlook on its A minus debt rating for the company. Though acknowledging that Orix has a "complex business mix ... which heightens the challenges it faces in risk management and governance," it also says the company has a "solid track record of profitability."

For Orix, taking risks is a long-established strategy.

"We should never be satisfied simply to maintain our position in anything," Yoshihiko Miyauchi, former CEO and one of the founding members of Orix, said in a 2013 interview for "Good Risks," a book on the company that came out the following year. "We want to grow, always in a healthy and sustainable manner, but growth is the name of the game."

Orix was Japan's first leasing company, offering equipment leases primarily to small and midsize companies that did not want to take on bank loans.

When other players started entering the business, Orix branched out into adjacent fields, such as ship and aircraft leasing, banking, insurance, real estate, hotels, airport operation and even running aquariums.

It was also a pioneer in Japan's capital market, becoming the first nonbank financial company to issue commercial paper. Getting access to the capital markets bolstered Orix's financial ammunition, allowing the company to expand rapidly, especially through the purchase of distressed assets during Japan's banking crisis of the late 1990s. The company got into the banking business by acquiring bankrupt Yamaichi Securities' banking unit.

Orix faced a funding squeeze, however, after the global financial crisis of 2008 created a freeze in capital markets. By then, the company was one of the biggest issuers of commercial paper and bonds in Japan.

It was forced to slash its funding in CP, raise cash by selling assets, and set up a credit line with banks.

The market crunch eased after the Bank of Japan decided to buy CP and corporate bonds in apparent market rescue operations, but Orix began working to bolster its capital, raising the equity-to-asset ratio to 24% from 14% between 2009-18. 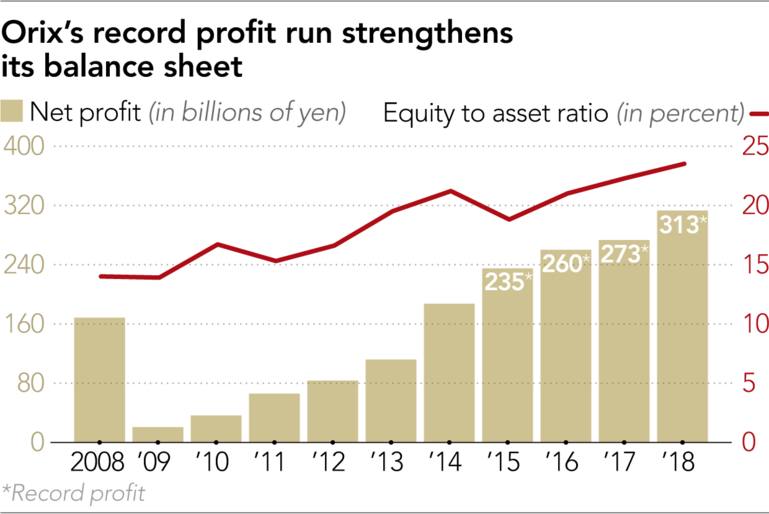 Orix managers acknowledge that the company's investment track record is not perfect, especially in Asia. Its first leasing joint venture with China's state-owned Citic Group in 1981 came to an end due to a spike in defaults among state-owned Chinese borrowers. Orix didn't quit China and now operates a railway leasing company, called China Railway Leasing, with a state-owned enterprise.

But overall, analysts say, the company has been extremely good at timing the market. It has successfully exited from investments in Japan's Aozora Bank, express haircut service QB Net, Malaysian budget airline AirAsia X, and U.S. investment bank Houlihan Lokey, among others.

For Orix, growth will continue to be the priority. Despite the recent turbulence, Orix says it is not backing down on its expansion plans.

In 2018, the company strengthened its presence in Europe with the establishment of a U.K. unit tasked with looking for investment opportunities amid the chaos of Brexit.

The company says it is agnostic about where it will look for growth. "We want to diversify our investment as much as possible. We don't target a particular market," Yano said.

But Orix's attention is expected to be turned towards Asia, says David Russell, author of "Good Risks." "In almost all global businesses, the focus has been shifting to Asia, because that's where the growth is," he says.

Even in India, Orix is plotting a comeback, says Yano. "We want to learn lessons from our mistakes and do better in the future." 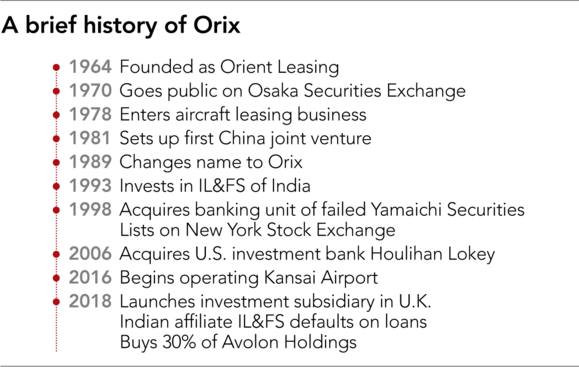