MUMBAI -- As every day passes, employees at India's near bankrupt Jet Airways are losing hope.

Competitors have been moving to take advantage of the financial troubles which have hit India's oldest private airline. Many local and international rivals have started boosting capacity on their Indian routes to fill the gap left by Jet's decision to suspend all flights on April 17. Others are snapping up the best and brightest from an airline that was once one of India's biggest carriers thanks to its reputation for impeccable service.

On Wednesday, staff gathered outside the carrier's Mumbai headquarters to urge the government to act before it was too late. They want New Delhi to bail the airline out of a debt crisis which has left some 20,000 employees without wages for months.

The call comes as the airline's creditors, led by State Bank of India, make a last-ditch effort to find new investors to infuse fresh capital into the troubled airline. They have invited aviation companies and investment funds around the world to bid for a stake of between 31.2% and 75% in Jet Airways. The deadline is next Friday, May 10.

But skepticism is mounting over whether there is enough potential in what remains of Jet's business to attract new equity investors. Since running out of cash and grounding its fleet on April 17, its asset value continues to decline.

Some observers say state-owned banks' refusal last month to fulfill a promise of emergency funding, which forced the airline to suspend flights, is itself a strong indication of the difficulty of turning the company round.

The crisis has been sparked by Jet's inability to make payments on its 100 billion rupee debt pile, the result of more than two decades of expansion. Like many traditional carriers, Jet had been caught unawares by the sudden emergence of budget airlines in the early 2000s. Indian travelers, initially enamored of Jet's focus on service, now wanted greater value as well. As a result, Jet's once dominant share of the country's $16 billion domestic aviation market collapsed from 23% in 2015 to just 14% by the end of 2018.

Troubles began to emerge last summer when news leaked that Jet was delaying payments to its pilots and managers. Over the past year, as its financial situation worsened, Jet has sought to strengthen partnerships -- such as with its big shareholder, Eithad Airways of the United Arab Emirates -- or even bring in new investors such as Tata. Those discussions have repeatedly foundered.

The final hope now is the creditors' tender. Among those who have expressed interest are Etihad, which has a 24% stake in Jet; India's National Investment and Infrastructure Fund; and two U.S. private equity companies, TPG Capital and Indigo Partners.

Some expect the four suitors to bid as a consortium led by Etihad, with a demand for the banks to write off their loans by more than 80%.

But there are those who doubt they will actually bid at all.

In fact, local business daily Economic Times reported on Thursday that none of the three non-Indian potential investors has even signed an non-
disclosure agreement, a prerequisite to start any serious business deal.

In question now is whether Jet Airways has the value to attract fresh investment and, if it does, how much?

The core of the value of any company is future cash flow. The assets -- including intangibles such as the brand -- add to that value. Key assets in any airline restructuring include airport landing slots, airplane parking slots, bilateral international route permits, owned aircraft, spare parts, maintenance equipment, airport facilities, offices and other real estate. Jet Airways’s past record makes it difficult to expect substantial future cash flow. The airline has recorded annual net profits only twice in the past decade, pushing its net assets deeper into negative territory year by year. Analysts note that the airline has in effect been run by a single personality: founder Naresh Goyal. The company operated without a chief executive for 20 months before current CEO Vinay Dube was recruited from Delta Air Lines in August 2017.

Over the years, the airline tried to compete with new low-cost carriers by adding discount sub-brands. The problem was that Jet was operating both full-service and low-cost flights on an uncompetitive fixed cost base. It has also been slow to review profitability of routes and reshuffle them.

Jet Airways' failure to generate profits forced the airline to eat up its own balance sheet to survive.

As time passed, and debt increased, Jet Airways cashed in various assets. Its total fixed assets stood at just 36 billion rupees ($515 million at current rates) as of March 2018, down from 172 billion rupees 10 years earlier, according to India's Cogencis Information Services.

In 2013, Jet sold its three lucrative landing slots at London's Heathrow airport to Etihad for $70 million, while the Gulf carrier bought a 24% minority stake in Jet for $379 million. Jet continued to use the slots on lease from Etihad, but returned them to the Abu Dhabi-based airline on April 28. Etihad needs to find others to lease these slots as soon as possible, at least for the short term, because the airport revokes them if they are not used for three months.

India's Ministry of Civil Aviation announced on April 23 that it would allocate some of the slots at Indian airports vacated by Jet Airways to other domestic airlines on "a purely temporary basis, for a period of three months."

As is the case at Heathrow, slots at major international airports such as Singapore's Changi or Dubai International are revoked if not used for three months.

This means Jet has only a three-month window to settle on a turnaround plan if it is to retain its rights to take off and land at domestic and overseas airports. If it fails, the slots will be revoked, and its asset value will be even lower.

Meanwhile, Jet Airways had a fleet of 119 registered aircraft as of the end of September 2018, according to the government, of which it owned just 16 planes outright. Securities analysts and credit agencies say most of those owned planes have been put up as collateral on bank loans and other credit facilities. The rest of the aircraft were on lease, and lessors grounded most of those by early April because the airline failed to make lease payments.

"In effect, there are no assets left on Jet's books. The question therefore is how potential investors value off-balance-sheet stuff like its brand power and workforce quality in measuring Jet's current enterprise value," said an analyst last week.

"Our most valuable assets are our employees," Dube, the CEO, said in a local television interview last week. "[They] are the best I have seen in my 30 years of aviation experience," he insisted. The Indian-American aviation veteran worked at U.S.-based Delta Air Lines and American Airlines before coming to Jet.

But many of its 20,000-odd employees -- especially skilled workers such as pilots, cabin crew, technical ground staff and senior managers whose salaries have not been paid since December -- may not be staying.

Dube cannot offer any guarantees to those who remain. "We must also be realistic," Dube admitted in a letter to employees shortly after the airline shut down operations. There would be no visibility on how employees would be treated in the bidding process, he said.

The government has chosen not to intervene to save jobs, which some observers feel has contributed to creditor reluctance to keep the airline running while searching for new investors.

"Those state-owned banks had been waiting for an approval from the Modi government for rescue funding to Jet Airways, which never came," a Mumbai-based financial industry source close to the situation said last week.

According to local media reports, Jet Airways gross debt of more than 100 billion rupees ($1.4 billion) at the end of December is largely bank loans. A majority of these loans were made by SBI and Punjab National Bank, another state-owned lender. Other creditors include Yes Bank, an Indian private-sector bank, and HSBC.

The government's decision to hold back contributed to their growing pessimism about Jet's future prospects.

"State-owned banks are controlled by the government," the financial source added. "So essentially the... government, as well as state-owned bank lenders, were highly skeptical about the probability of revival of the airline."

As a result, the SBI-led group of creditor banks did not fulfill their promise in late March to provide 15 billion rupees in working capital in exchange for newly issued shares, as well as for founder Goyal's exit from the chairmanship and the board.

Even after Goyal resigned on March 25 the banks still refused to issue the funds.

The clock is now ticking. If there is no official bid by May 10, the case is likely to go to the National Company Law Tribunal, India's corporate bankruptcy court system. This was set up under the Insolvency and Bankruptcy Code, the country's first-ever effective bankruptcy law enacted in 2016 under the Modi government.

The new code allows banks to wrest control of insolvent companies from existing shareholders and management. But it also means that unpaid salaries, overdue vendor payments and unsecured credit and loans from banks rank low in repayment priority. The law also prohibits existing major shareholders from bidding for the debtor company in the process, so Etihad would be excluded as a potential bidder.

While the code has revolutionized one of the world's slowest insolvency regimes by speeding up the debt recovery process, it will do little to help Jet Airways survive. India does not yet have a regime which allows for revival of a business through debt and asset restructuring under the same management, as with Chapter 11 of the U.S. bankruptcy law.

That system ensured the survival of the big three full-service U.S. airlines -- American, Delta and United -- which all re-emerged from Chapter 11 bankruptcy. Japan Airlines, too, kept its operation going through a Japanese version of Chapter 11 initiated in 2010, and has succeeded in becoming a profitable enterprise.

In the absence of a bid next Friday, that option is not available to Jet, its employees or its unsecured creditors. And the airline that once boasted the slogan "It's time to fly" will be grounded forever. 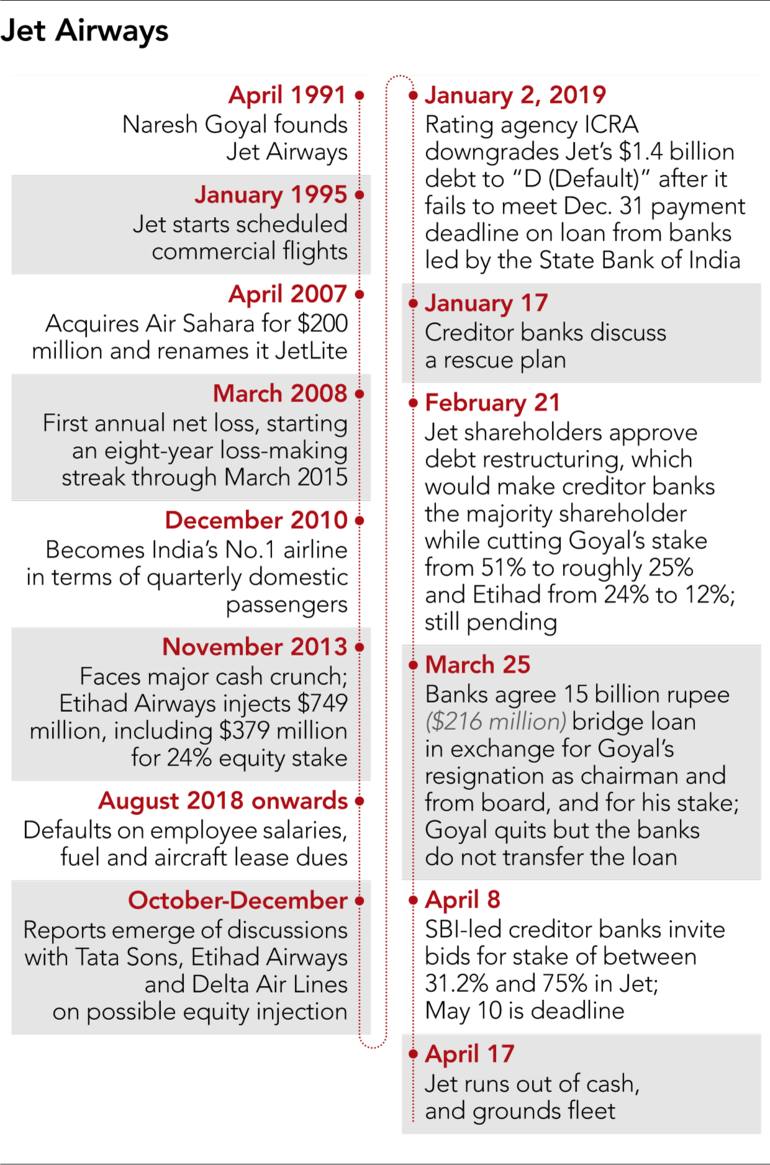