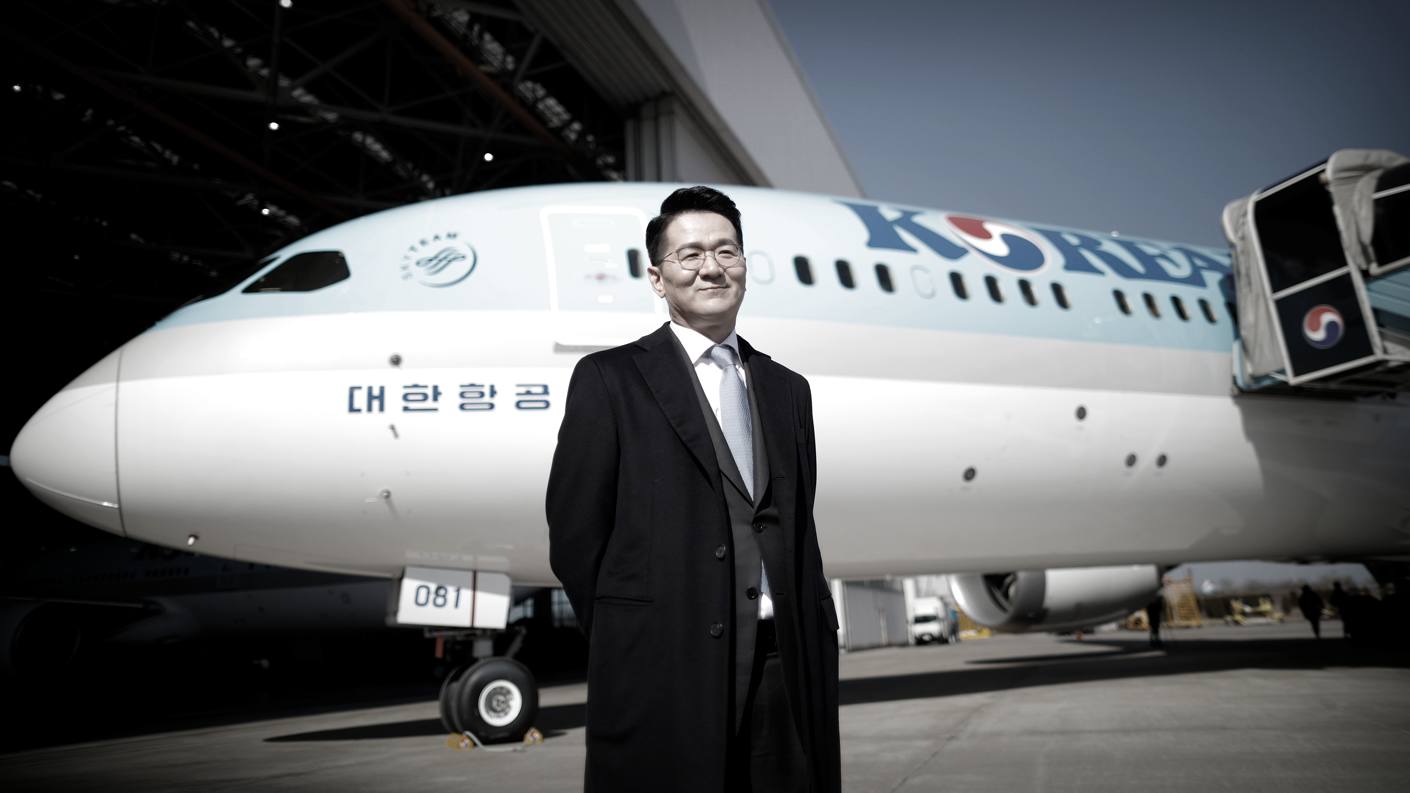 Korean Air Lines Chairman Cho Won-tae is fighting for his company's and his own future. (Source photo by Reuters)
Business Spotlight

SEOUL -- Like the heads of many airlines, Korean Air Lines Chairman Cho Won-tae is fighting to keep his company afloat as the coronavirus and travel restrictions batter the aviation industry. Unlike most of his peers, Cho is doing this while trying to fend off a coup by his own sister.

The family feud is expected to come to a head at the general shareholder meeting of Hanjin-KAL, the airline's holding company, on March 27. The two siblings and their respective allies have roughly equal stakes, and are continuing to try to strengthen their positions, even as the outlook for airlines around the world continues to darken.

In his 11-month tenure, Chairman Cho has already had to steer KAL through challenges from budget carriers and a sharp drop in demand from Japan, a key market, due to political tensions. Now the coronavirus outbreak -- which has forced the airline to ground 80% of its fleet as the aviation market collapses -- is pushing many airlines to the brink.

Aviation consultancy CAPA predicts that without government support, most airlines will be bankrupt by the end May.

Cho's other challenge comes from his older sister Cho Hyun-ah, who has teamed up with local activist fund Korea Corporate Governance Improvement to demand he step down to take responsibility for the airlines' poor earnings and high debt. It is a showdown that their father, controversial former Chairman Cho Yang-ho, apparently saw coming.

From a Los Angeles hospital bed last year, the elder Cho implored his children to cooperate in running Hanjin-KAL, the transportation conglomerate founded by his father which serves as the holding company of the airline.

A feud with his own brothers two decades earlier left the group weaker than it had been. Hanjin Shipping collapsed a few years ago, while Hanjin Heavy Industries was forced to give up its debt-ridden shipyard in the Philippines last year.

After Cho died in April, however, it took less than 10 months for his children to go down the same path.

The key issue at the general shareholders meeting will be Cho's reappointment as a board director, which requires more than half of the votes.

Cho Hyun-ah, who formerly served as vice president of KAL, had been looking to make a comeback. She was removed from her position in 2014 over what came to be known as the "nut rage" incident: While aboard a flight leaving New York, Cho lost her temper over the way she was served a packet of nuts. Cho berated the crew member and forced the plane to return to its gate. She was eventually charged with interrupting business and jailed for four months. Her potential return to the company had become a point of contention between her and her brother. His remark to a newspaper late last year that such a return was not on the cards did not go down well with her.

Last week, the group reiterated its resistance to her return.

"Cho Won-tae is an aviation expert who has experience in Korean Air's passenger, freight, management strategy, IT and procurement departments. There is no doubt that he is the best executive who can weather 'corona crisis' which Korean Air must overcome for its survival."

In contrast, the group said it was "very doubtful that [Cho Hyun-ah] would not be involved in the management" if she were to have a hand in choosing board members.

KCGI denies that Cho would come back as an executive, and is suggesting that POSCO board chairman Kim Shin-bae be appointed CEO of the airline. Kim is a professional executive who was CEO of SK Telecom from 2004 to 2009.

The activist investor points to the airline's performance as proof that change is needed. Citing government data, it said KAL's total loss for six years through 2019 reached 1.7 trillion won ($1.4 billion), putting its debt-to-equity ratio at 861.9%. According to Moody's, the airline has some $4.3 billion in debt coming due this year. Disruption from the coronavirus is only straining its finances further. "We believe the only solution to resolve Hanjin group's crisis is to replace the current management led by Cho Won-tae, a member of the owner family, and appoint board directors independent from the major shareholder so that they can make professional and transparent management," KCGI said in a statement on Wednesday.

The alliance between Cho Hyun-ah and KCGI, which also includes mid-sized builder Bando, holds a roughly one-third stake in Hanjin-KAL -- about as much as the combined stake owned by Chairman Cho, another sister Cho Hyun-min, his mother Lee Myung-hee, Delta Air Lines and Kakao, the internet company.

Delta did not respond for comment, but in the past the U.S. airline has indicated its support for Cho Won-tae.

"It is very difficult to expect which party will win, but Chairman Cho Won-tae's side is in a little bit better position in the shareholder meeting," according to Choi Nam-kon, an analyst from Yuanta Securities. "Cho's side had more stake as of December and is supported by ISS [Institutional Shareholder Services] and Korea Corporate Governance Service."

Tipping the scales one way or the other could be the National Pension Service, the state fund which owns a 3% stake. NPS, normally a passive investor, said that it will cast a vote at the upcoming shareholders' meeting.

NPS flexed its muscle last year when it helped block Chairman Cho Yang-ho's reappointment as a KAL board director two weeks before his death. Cho was embroiled in a legal dispute over alleged embezzlement at the time. Analyst Choi sees the NPS as more likely to side with the current chairman.

Individual shareholders may also influence the fate of Cho Won-tae. KCGI is asking for their support, in return promising improved earnings and better dividend payments. Employees are taking the chairman's side, with labor unions of the group publicly announcing their support for Cho Won-tae, in part because of his sister's past abuse of cabin crew.

"Cho Hyun-ah had persecuted workers with an arrogant attitude, causing the world to make fun of the Hanjin group. How can she try to seize the group now?" said union leaders of the group in a statement.

Unions also worry about possible layoffs and restructuring if the activist fund takes control of the company. KCGI has tried to allay such concerns by pointing out that there had been no unnecessary restructuring at the companies it had run, such as Hyundai Cement and InnoWireless.

The battle temporarily pushed shares of Hanjin-KAL higher as competition heated up up for more stake. The stock almost doubled in February, despite its poor earnings.

That uptick did not last long, however, as the coronavirus outbreak dealt a blow to KAL. With more than 80% of its aircraft on the ground, the airline said it is struggling to find enough parking places for them.

KAL CEO Woo Kee-hong sent a message to employees, asking them to understand the management's possible emergency measures for the survival of the company. Those measures could include unpaid leave and early retirements.

And in a statement earlier in March Cho said the company is "fighting for its survival."

"It is the worst situation since I joined the company," said a veteran KAL manager surnamed Jang who has worked for the company for two decades. "I have no idea how the company could survive without the government aids."

The transportation ministry announced a 300 billion won emergency fund for budget airlines last month, which KAL is not eligible for. However, it will be able to take advantage of government subsidies announced Monday to help airlines to avoid laying off staff.

The outcome of the battle -- the latest between an activist investor and a family-run conglomerate, or chaebol -- could have implications for Korea Inc. as a whole. For the last few years, U.S. hedge fund Elliott attempted to challenge Samsung Electronics and Hyundai Motor, the country's two largest conglomerates, though it failed in both attempts.

South Korea's chaebol got their start in the aftermath the Korean War and grew quickly under the military dictatorship, in part thanks to their cozy relationship with authorities.

Cross shareholdings have allowed the founding families to keep control of their empires, even as their absolute stakes in them shrank. So far they have been able to fend of the occasional challenge from foreign activist funds thanks to supports from the government and individual shareholders.

Foreign funds, by contrast, have failed to win individual shareholders' hearts. Local media criticized Elliott, for example, as an "eat-and-run fund" that was only interested in short-term gains. Where the like of Samsung generally have public opinion on their side, however, Hanjin-KAL's reputation has taken a hit from its founding family's various scandals.

Whether that will help KCGI emerge victorious is an open question, but if it does, it will be remembered as the first activist fund to win over chaebol. And that could encourage more activist funds to challenge other conglomerates. Such a scenario would, ironically, accelerate the chaebol reform that many presidents have tried but failed to implement.

And the upcoming general meeting, moreover, may be just the start.

"The battle will not end as a one-time match, as both sides are continuing to buy stocks," Yuanta's Choi said. "A temporary shareholder meeting can be called after the general meeting."