The Galaxy Macau casino resort, which opened in 2011, was designed to cater to Asian tastes, with a wide range of Chinese restaurants and few Western-style bars.   © Reuters
Company in focus

Galaxy Entertainment faces hurdles to entry in Japan and the Philippines

HONG KONG -- For a casino mogul with global ambitions, Francis Lui Yiu-tung displays none of the flamboyance of his major rivals.

A nongambler who jokes that his idea of excitement is walking the family dog -- a corgi -- the conservatively suited eldest son of Hong Kong billionaire Lui Che-woo runs Galaxy Entertainment Group, the world's second-biggest gaming company by market capitalization, from a modest mid-rise office in Hong Kong.

Sixty kilometers west in Macau, the world's largest gambling hub, Galaxy has grown from operating one small casino in 2004 to emerge last year as the market leader, with 22.6% of gross gaming revenue, according to boutique investment bank Union Gaming. That put Galaxy just ahead of the 22.3% take of Sands China, the local unit of Las Vegas Sands, the largest gaming company by market cap. "If we had followed what the Americans were doing, we would always come second," says Galaxy Entertainment Group Deputy Chairman Francis Lui Yiu-tung. (Photo by Takeshi Kihara)

"In our industry we have some big personalities," Lui told the Nikkei Asian Review. "But in our family, we value humility and just get on with the job."

Lui's diffidence contrasts with the glitter of his flagship casino resort. The Galaxy Macau, designed by Lui to resemble an Asian potentate's palace and topped with 24-karat gold cupolas, caters to Asian tastes, with food outlets covering every type of Chinese cuisine and price point and fewer Western-style bars. "If we had followed what the Americans were doing, we would always come second," Lui said.

The Galaxy Macau raked in roughly $5.25 billion last year in gross gaming revenue, the most in the world according to JPMorgan Chase, which ranked the casino first for high rollers and mass-market players as well as overall profits.

"Galaxy Macau has become a thousand-pound gorilla that offers everything to everyone," said JPMorgan regional gaming analyst D.S. Kim. Galaxy's StarWorld casino meanwhile is the leader in VIP gaming as ranked by daily betting volume per table.

Now Lui, 62, wants to replicate Galaxy's success beyond Macau. In a flurry of activity in recent weeks, it paid $927.5 million to acquire a 4.9% stake in Las Vegas-based Wynn Resorts, recruited an industry veteran to head its drive for a Japanese casino license and unveiled plans for a $500 million joint venture casino hotel on the Philippine resort island of Boracay. But the Philippine project has run into complications since Lui and his father courted President Rodrigo Duterte last December. While the national regulator granted the partners a provisional gaming license in late March, Duterte soon after suddenly said the government would not allow any casinos on Boracay. In its quarterly results statement on May 3, Galaxy said, "We continue to work with our local partner to seek further clarification."

Said Grant Govertsen of Union Gaming, "While we never expected this project to be a meaningful driver of profits, it would have burnished [Galaxy's] credentials as an international developer of high-quality resorts."

Many uncertainties also loom over Japan's opening to casino gambling too, but the government favors Singapore-style "integrated resorts" that would include family entertainment. The Galaxy Macau would fit that description, with amenities including a theater, a cinema and a water-themed rooftop entertainment deck with a wave pool lapping an artificial beach with 350 tons of white sand. The resort now covers 1.1 sq. km, with six hotels and 120 food outlets. Over the next few years, Lui plans to double the resort's size, adding more nongaming attractions and hotel rooms.

In 2015, Galaxy paid 42.4 million euros ($50.8 million) for a 5% stake in Societe Anonyme des Bains de Mer, which operates the 155-year-old Casino de Monte-Carlo in Monaco. The stake gave Galaxy a seat on the SBM board and last year the two companies joined forces to pursue projects in Japan and other Asian markets.

"After Macau, we all knew Japan would be the next holy grail," Lui said. "With the experience we have learned in Macau, and in partnership with Monte Carlo, we can be very much part of it. We have a database of premium customers that would make the integrated resort industry in Japan very successful and hopefully help revive the Japanese economy." An investment in the country "should involve a Japanese company or two or three," he added. 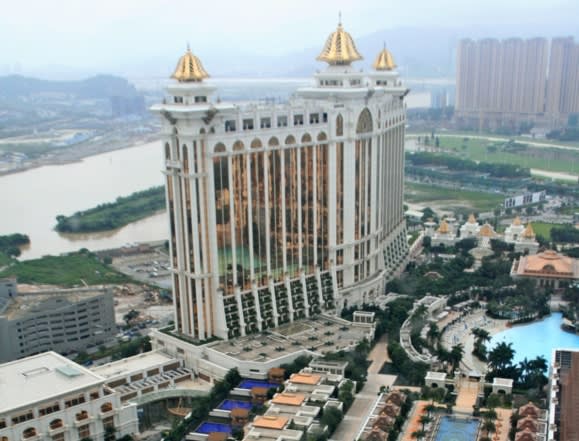 In addition to its gambling hall, the Galaxy Macau features shops, restaurants, a theater, a cinema and a water-themed rooftop deck with a wave pool and an artificial beach.

Wynn Resorts could potentially figure in the consortium too, according to Matthew Maddox, who took over as its chief executive in February after founder Steve Wynn resigned amid allegations of sexual misconduct. "Because both operators, Wynn and Galaxy, focus on quality and on experience, I think that as international jurisdictions open up, we could potentially work together to jointly examine those," Maddox said during an earnings call last month. Galaxy Chairman Lui Che-woo is ranked by Forbes as the world's 45th wealthiest individual, with a net worth of $21.9 billion.   © Reuters

"Ted is incredibly well respected in the gaming community," said Anil Daswani, who leads gaming research at Citigroup from Hong Kong. Still, he considers Galaxy to be only a second-tier contender for the three gaming licenses that the Japanese government plans to award, with Las Vegas Sands and fellow U.S. operator MGM Resorts International, which also runs casinos in Macau, considered favorites. The American operators are seen in having an advantage in experience as well as the benefit of Japan's close ties with the U.S. Said Daswani, "A partnership with Wynn would take Galaxy up the pecking order quite considerably."

Unlike Melco, MGM and Las Vegas Sands which have each talked of investing up to $10 billion for Japanese resort, Lui has not put a figure on Galaxy's plans, but the company does have plenty of firepower. In the first three months of 2018, the company generated HK$4.3 billion in adjusted earnings before interest, taxes, depreciation and amortization, up 36% from a year earlier. Revenue climbed 32% to HK$18.5 billion. Across 2017, net income jumped 67% to HK$10.5 billion while revenue rose 18.2% to HK$62.45 billion.

Galaxy's market value has nearly tripled over the past two years as Macau has rebounded from a slump in VIP gambling caused by Chinese President Xi Jinping's broad anti-corruption campaign. The surge has brought Chairman Lui Che-woo up to 45th on Forbes' rankings of the world's wealthiest, with an estimated fortune of $21.9 billion as of May 3, according to Forbes. The Lui family controls 45% of Galaxy as well as another Hong Kong-listed company and several private businesses. Brokerage GF Securities in late March set a target price of HK$79.70 for Galaxy. The shares closed May 3 at HK$69.55, down 2% after the release of the company's quarterly update.

GF analyst Ou Yafei argues the company deserves a 20% valuation premium over its peers, with the benefit of its investment in Wynn Resorts. Daiwa Capital Markets also rates Galaxy as a "buy," with its analysts predicting it will raise its market share further over the next two years from its current peak and noting its success has come in the face of competition from rivals' freshly opened properties.

But Galaxy faces a number of uncertainties, even in Macau. Its concession in the city is set to expire by 2022, along with those of its competitors. While analysts expect Galaxy's license to be renewed, there is speculation that the government could issue additional licenses, raise gaming taxes or impose more stringent investment requirements. In November, Nomura Securities warned of greater stock price volatility as the concession renewal period nears.

If Galaxy wins a license in Japan, it would not be the first time the Lui family has beaten the odds. Lui Che-woo, who was born to what was then an affluent family in 1929 in Jiangmen, Guangdong Province, arrived in Hong Kong with his family in 1934. At 13, he sold food on the streets of what was then a British colony before making his first pot of gold trading war surplus equipment.

In 1955, Lui formed what became K. Wah Construction Materials, with operations stretching into quarrying, construction, blast furnace slag, property and hotels. After Portugal returned Macau to Chinese rule in 1999, Francis and his siblings advised their father that the pending abolition of the city's casino monopoly -- held for four decades by Stanley Ho -- offered an irresistible opportunity.

The family's newly formed Galaxy Casino joined the bidding with Las Vegas Sands and their consortium won one of three concessions awarded in 2002, alongside Wynn Resorts and Ho's SJM Holdings. Within a year though, the Galaxy-Sands alliance had fallen apart over strategic differences.

The government, not wanting to lose Sands, then allowed each license to be split into a sub-concession, setting Galaxy off on its own with no experienced casino executives. "We came from nowhere," Francis Lui said.

In 2004, Galaxy opened its first outpost, the Casino Waldo. The next year, K. Wah Construction acquired 97.9% of Galaxy Casino from the Luis in a HK$18.4 billion deal, taking the new name Galaxy Entertainment Group.

The Luis' fortunes have climbed quickly since then. Lui Che-woo marked his success in 2015 by launching an annual HK$20 million Prize for World Civilization and followed that up with the publication of an authorized biography, "Creating Value, the Journey of a Self-Made Billionaire."

Though Francis Lui still prefers walking his dog to striding the corporate stage, he does not hide the ambitions that have taken his family forward. "I like to continue climbing mountains," he said. "It gives me a lot of satisfaction to see the company one step at a time scaling higher heights."