A Muji store in Shanghai: China accounts for 18% of its total sales. (Photo by Kosaku Mimura)
Company in focus

BANGKOK/TOKYO -- Ryohin Keikaku, the company that runs the Muji chain of household goods stores, is refusing to back down from a long trademark battle in China -- a fight that looks unlikely to be its last.

On Nov. 1, the Japanese company's Chinese-language website declared it will continue to use the Muji name in China despite a legal challenge over the trademark by a local company. This followed inaccurate reports in the Chinese media that the Japanese retailer had paid a penalty to the Chinese plaintiff. Ryohin Keikaku stressed that "the lawsuit is still ongoing."

The retail group locked in the trademarks for most of its products, and China has since become its largest market outside Japan.

On Christmas Day in 2017, the intellectual property court in Beijing ruled in the plaintiff's favor. Ryohin Keikaku is now appealing that decision.

At the same time, Ryohin Keikaku laments the growing number of stores in China that mimic both the products and interior design of real Muji outlets, and is threatening legal action of its own.

Closing its Nov. 1 statement with a strong warning, Ryohin Keikaku said, "We will do our utmost to stop counterfeit outlets and products by other companies."

Even the Beijing Youth Daily, a mouthpiece newspaper of the capital's Communist Youth League, acknowledged the origins of Muji's minimalist concept in a Nov. 4 story on the ongoing lawsuit, writing, "When we speak of 'Wuyinliangpin,' people think of a simple and plainly designed long-standing Japanese brand."

In October, Ryohin Keikaku President Satoru Matsuzaki told the Nikkei Forum in Bangkok that the basic ideas that define the brand include a "simple and pleasant lifestyle" and an "anti-luxury, anti-cheap" attitude. But while Muji's "simple and refined" products are gaining popularity in Asia, their unembellished appearance means they are relatively easy to copy.

Miniso Industries, operator of MINISO stores, has adopted a similar strategy to that of Muji by selling what it bills as Japanese-designed "simple, natural and high-quality" household products in more than 1,000 stores. MINISO is a brand co-founded by Chinese and Japanese designers, according to the company’s website. Matsuzaki has dismissed the idea that Miniso poses a threat to Muji, saying it is "something completely different from us." 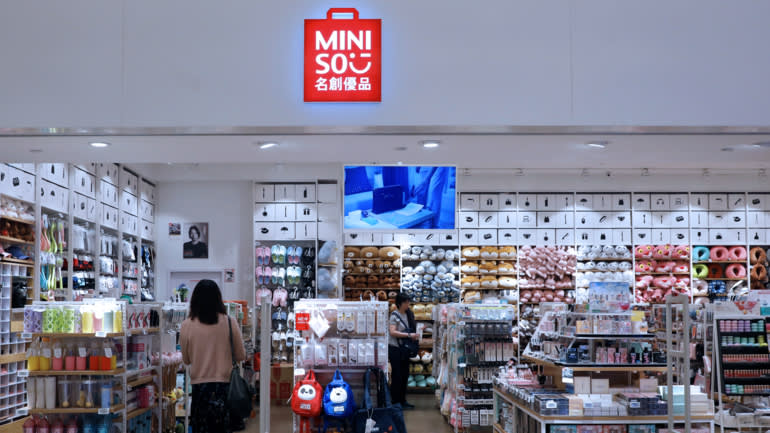 Some Chinese consumers would disagree.

"I find their qualities not that different. I can tell that Miniso is trying to imitate Muji in terms of design, but it's cheaper and pretty good quality," said a man who identified himself as Du, who was buying facial cream at a Miniso outlet in Shanghai.

Zhou Yimin, an 18-year-old woman in the city, sees more of a gap between the two. "I admit that some products in Miniso are similar to Muji but their qualities are very different," she said. "I buy in Miniso things I don't expect to use for a long time."

Either way, Miniso's robust growth and the trademark litigation can both be taken as signs that Muji faces more years of wrangling with various imitators.

Ryohin Keikaku started in 1980 as a private label of the Seiyu Japanese supermarket chain, which is now owned by Walmart.

Back then, Japan was in a period when "whatever was produced would sell," according to Matsuzaki. That changed with the long slump that persisted since the early 1990s.

Japanese companies adopted two different strategies in response. Some opted for low-priced products to support a low-margin, high-turnover business model. Others decided to spend heavily on designs and branding.

Muji was meant to represent a third way, by building its brand around high-quality goods with no-frills designs. Until 1982, when copycat products started appearing in Japan, Muji goods did not even carry a logo. Muji's concept and design philosophy has proved to be a hit with consumers tired of the excessive commercialism of mass retailers. The company is on track to post a solid 11.8% rise in operating revenue to 424.3 billion yen ($3.77 billion) for the year through February 2019, with a 10.4% increase in operating profit to 50 billion yen. The overseas operation is expected to account for 40.7% of the total revenue. This will mean that Muji has reported 16 consecutive years of revenue growth and eight straight years of double-digit growth in operating profit.

Ryohin Keikaku has been keen to expand overseas. The company opened its first stores outside Japan in the U.K. and Hong Kong in 1991. "Management at the time understood that a Japanese company would not survive without global expansion," said Matsuzaki. East Asia is expected to account for over 30% of Ryohin Keikaku's total revenue for the year ending in February and about 75% of its overseas sales.

China is the biggest market in East Asia, with sales in the March-August period surging 17.4% from a year earlier to 36.1 billion yen. China is responsible for 62% of the company's sales in East Asia and 18% of total sales.

As of the end of August, there were 235 Muji stores in China compared with 420 outlets in Japan. Muji operates a total of 888 outlets, including 47 in Taiwan. In 2018, Ryohin Keikaku opened its first China hotels in Shenzhen and Beijing. Yet, despite its progress in China, Ryohin Keikaku has never had it easy there.

Its application in 1999 to trademark the names "Mujirushi Ryohin" in Chinese characters and "MUJI" in the alphabet was partially rejected, as the Chinese authorities had granted those names to an unrelated Hong Kong-registered company called Jet Best Investment in 1995. The Japanese company was forced to file a lawsuit in 2000 to secure the rights to sell clothing and footwear under its own brands in mainland China.

When its maiden China shop opened on Shanghai's glitzy Nanjing West Road in July 2005, the company was still fighting the authorities and was unable to sell clothes and shoes. "We have to let consumers recognize that we own this brand," then-President Tadamitsu Matsui told reporters. In December 2007, the trademark office canceled JBI's rights once and for all. Trademark headaches are only part of the story. In March 2017, Muji became a target in the state-run China Central Television's annual consumer rights day show, known for its undercover investigations about defective products.

The TV program claimed Muji stores were selling food products made in areas of Japan banned from exporting to China due to the Fukushima nuclear disaster in 2011. Muji's share price fell 4% at one point the next day; the claims were later discredited.

Slowing sales in China have put even more of a strain on the retailer's stock of late. The price has declined 23% from the beginning of the year, far underperforming the benchmark Nikkei Stock Average, which has lost 12%.

Same-store sales, in yuan terms, grew 7.1% in the September-November quarter of 2017 but contracted 2.2% in the latest June-August period. The company attributed the fall to supply shortages of clothes and household goods during the peak summer season. But weakening consumer spending in China is bound to hurt sales of Muji-brand products in the future. 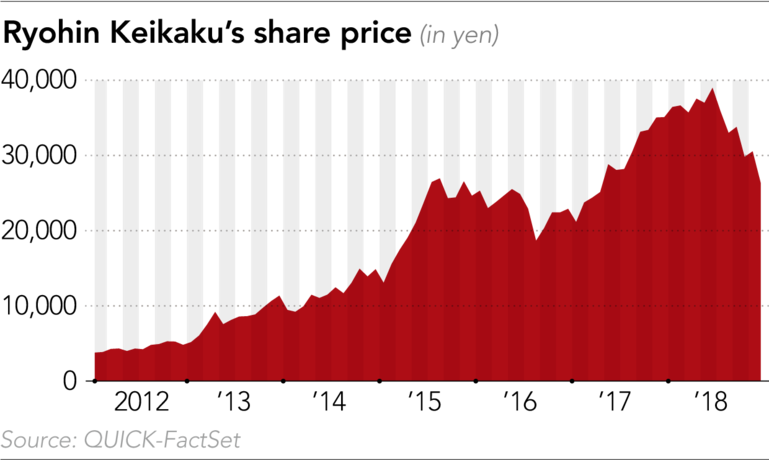 Ryohin Keikaku's China business "inherently entails a variety of challenges, large and small, and it will be a while before revenue growth starts accelerating again," Nozomi Moriya, an analyst at UBS Securities Japan, said in an Oct. 15 research report.

Maki Shinozaki, an analyst for Morgan Stanley MUFG Securities, also said in an Oct. 3 research report that a "quick recovery of existing stores in China would be difficult to achieve," following the company's announcement of its June-August financial results.

In response, Ryohin Keikaku is seeking to expand operations in Southeast Asia by entering Vietnam, its last untapped major market in the region, in the next two years. It is eyeing either Hanoi or Ho Chi Minh City for its first opening. Rising household incomes in the country are expected to boost purchases of consumer products, Matsuzaki noted.

Ryohin Keikaku also plans to restructure its product and pricing strategies as it expands in Asia. It will designate 50 "key strategic items," including socks, T-shirts, pajamas, towels and skin lotions by 2020 and 50 more by 2030, while charging the same price for these items around the world, according to Matsuzaki. 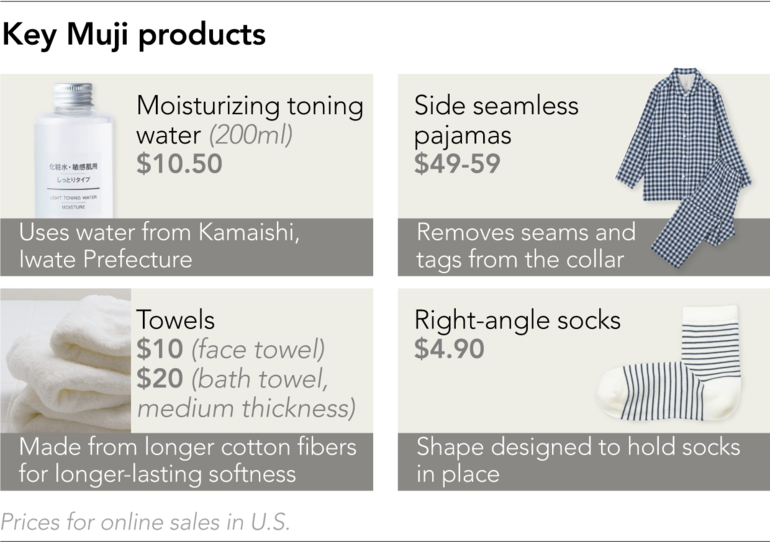 This strategy will entail price cuts in some markets. Asian consumers are becoming aware of price differences for Muji products in various countries, which explains why the company is focusing on uniform pricing.

The company hopes to achieve cost savings by scaling up production of these strategic items and moving more manufacturing from China to lower-cost Southeast Asian nations, mainly Cambodia and Vietnam. The price cuts will appeal to consumers who believe that Muji products are good but expensive. Reducing prices for core products should help the company fight back against copycats as well.

"If Muji can strengthen their brand value through retaining their own philosophy and optimizing prices, they can keep their competitiveness," said Moriya at UBS.

Matsuzaki is doubling down on that philosophy.

"Muji is an antithesis to modern consumer society," he said. "Our policy of offering products focused on necessary needs at reasonable prices is supported by consumers around the world."