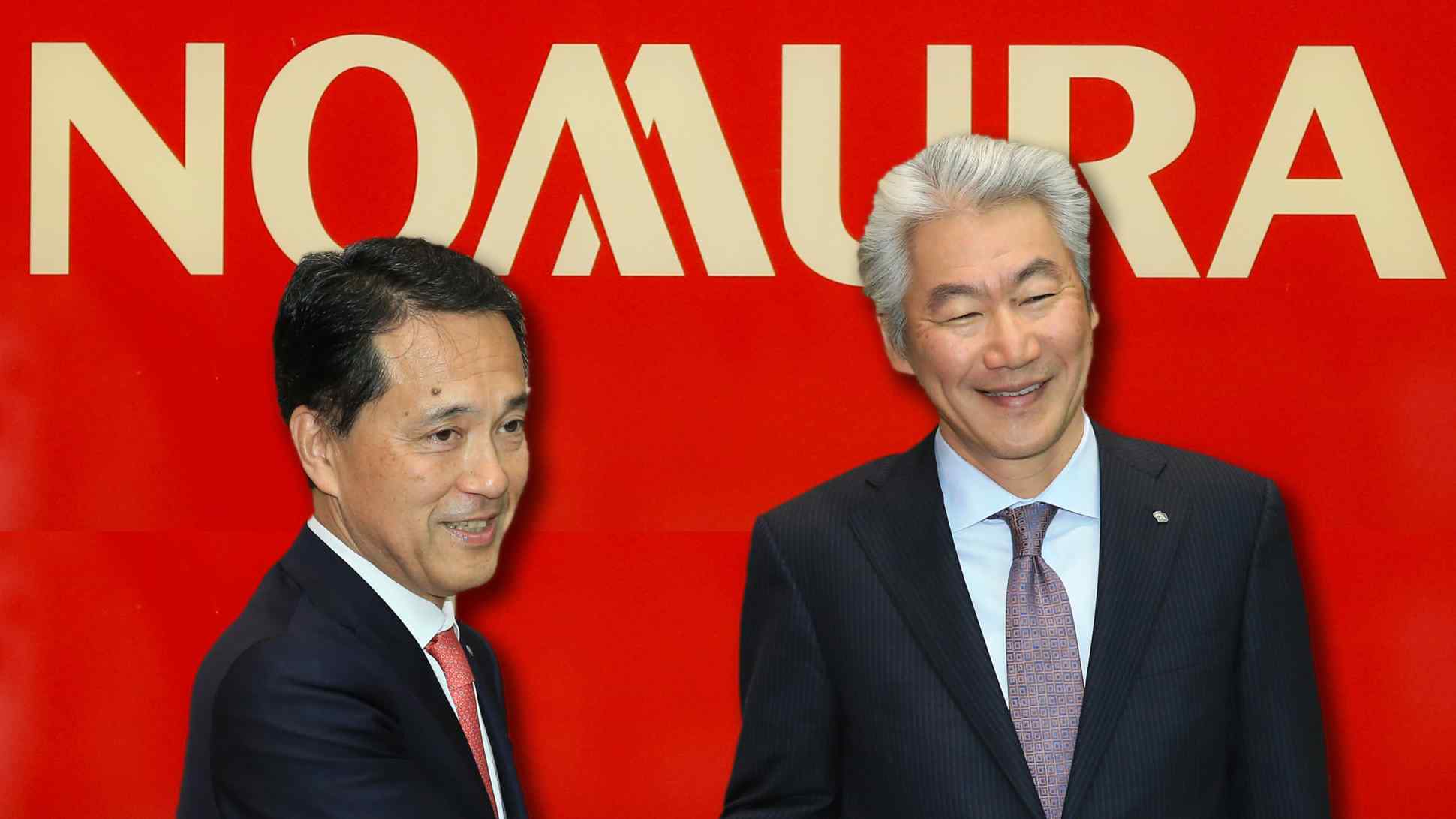 Overpowered by the likes of Goldman Sachs, Japanese group 'focuses'

TOKYO -- When Kentaro Okuda joined Nomura Securities in 1987, the Japanese company was poised to conquer the global investment banking industry.

Three decades later, the group is struggling to live up to the hype in a business dominated by big U.S. banks. As Okuda prepares to become CEO of Nomura Holdings on April 1, its new big hope is to crack the lucrative yet daunting Chinese market.

Overseas, it faces a series of tough challenges. Far from being on top of the world, Nomura is still digesting its first annual loss in 10 years -- an embarrassing bookend to an internationalization effort that included the acquisition of Lehman Brothers' European and Asian operations.

Japan's stock market is a very different place than it was when the Nikkei Stock Average was soaring to its all-time high of 38,915 in December 1989. Today, the bubble is a distant memory. Online brokerages overwhelm traditional brokers in retail trading. Even more worryingly, Nomura's wealth management client base is aging rapidly.

Half the country's $17 trillion in personal financial assets are held by people aged 65 or older, who prefer simple liquid assets over riskier long-term bets.

"I feel a sense of crisis about whether major players today will also be major players in the future," Okuda told investors in December, after the announcement that he would succeed current CEO Koji Nagai. The 56-year-old Okuda, known internally as a team player who keeps a low profile, cuts a contrasting figure to the tall and dapper Nagai, who relishes the media spotlight.

Nagai hails from the wealth management business -- Nomura's traditional strength -- where lone bankers develop one-on-one relationships with retail investors. On the other hand, Okuda is a career investment banker, which typically involves working with teammates to cultivate corporate clients, laying the groundwork for initial public offerings, stock issuances, bond sales and other deals. His selection as CEO suggests a shift in the company's priorities toward the wholesale business.

Okuda also comes to the top job with extensive international experience. As a young investment banker, he was responsible for Eastern European countries, at a time when Nomura's overseas operations centered on government-related projects such as privatization. Later, he led Nomura's Americas operations in New York for two years.

An avid jogger who regularly ran in Central Park, Okuda describes himself as "physically durable."

Nagai argues that he is leaving Okuda a clean slate after mopping up messes in 2019. Nagai sharply wrote down Nomura's investment banking assets last year, including the former Lehman operations and electronic brokerage unit Instinet. To cut costs, he also decided to close 20% of its 156 retail branches in Japan.

But just as Nomura was drawing a line under the 100.4 billion yen ($897 million) loss for the year ended March 31, 2019, it stumbled into a scandal. A prominent Nomura researcher and key member of Japan's stock market reform committee tipped off the company's analysts and institutional investors on how listing standards were about to change and which stocks would be affected.

No laws were broken, and the committee ultimately drew up a different proposal, finalized last month. But the researcher's conduct was still considered tantamount to insider trading. Nomura was slapped with an administrative penalty and lost major underwriting deals, while Nagai took a 30% pay cut for three months.

Okuda's first challenge is to leave all that behind, and then move forward. Asked last month how he plans to steer the company overseas, Okuda replied, "We are going to choose and focus."

An early indication of what that might mean came in mid-December. In Nomura's first acquisition since Okuda's appointment -- and the first since the Lehman deal in the crisis days of 2008 -- it agreed to buy New York-based Greentech Capital Advisors.

Greentech is a boutique advisory that assists companies and institutional investors with acquisitions in environment-related fields like renewable energy, batteries, agricultural technology and next-generation vehicles. The purchase price is estimated at around $100 million -- a pittance compared with Nomura's roughly 40 trillion yen, or $380 billion, in total assets.

Overseas, Nomura is at a disadvantage against American "bulge bracket" giants J.P. Morgan, Citigroup, Bank of America, Goldman Sachs and Morgan Stanley. Nevertheless, Tsujino believes it can find a niche by focusing on relatively small investments the U.S. players overlook and by charging more reasonable fees.

"Nomura's stance seems to be to avoid overstretching itself by trying to become a full-line service provider," she said. At the same time, "Nomura cannot give up investment banking, considering Japanese companies' large cash holdings and their desire to deploy that money for overseas investments" -- particularly in the U.S.

Others, however, are unconvinced that Okuda's reign will turn out that different from Nagai's. 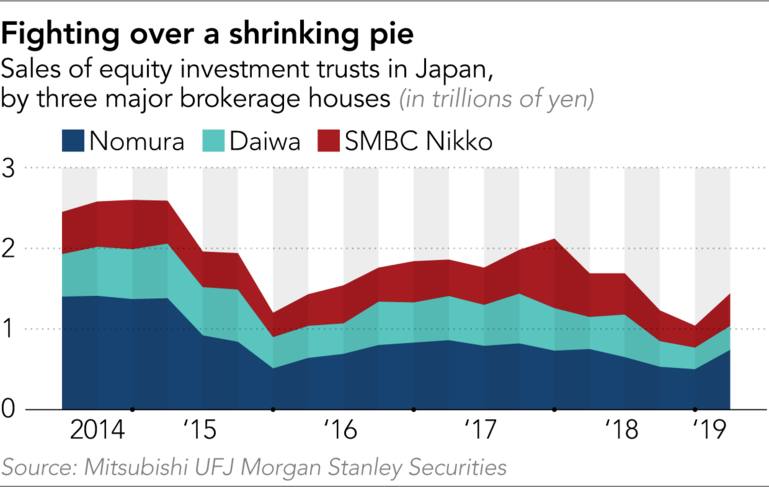 After all, the Lehman and European debt crises had been expected to open doors for Nomura. Instead, while European banks retreated, the U.S. competitors grew even stronger, with Nomura barely holding its ground in debt and equity trading.

In underwriting and M&A advisory services, the Japanese bank remains at the bottom of the league table. It also quit European equity underwriting in a round of restructuring in 2016.

That has put the company, Japan's biggest brokerage house, in a strategic bind. Despite its overseas struggles, many market watchers say there is nowhere for Nomura to go but abroad. Not only does Japan's aging population pose a threat, so does an intensifying price war.

In November, Fidelity Investments dropped a bombshell by cutting its commissions on stock investment trusts to zero. Japanese online brokers Matsui Securities and Monex quickly followed suit. This puts traditional players like Nomura, which charge commissions of up to 3% of investments, in a tight spot.

Nomura hopes to ride out the price war by increasing digital automation, allowing it to serve more customers while freeing up asset managers for face-to-face consultations with high-net-worth individuals -- a market the company dominates in Japan.

But Koichi Niwa, an analyst at Citigroup Global Markets Japan, warns that Japan's demographic constraints are unavoidable. "Domestic brokerage revenue at Nomura has been shrinking, as it has been for the whole industry," he said.

Instead, as the Japanese market declines and Europe and the U.S. prove increasingly tough, China beckons.

Beijing is opening its $21 trillion capital market to foreign institutions faster than expected, as part of its trade negotiations with the U.S. Come April -- rather than the initial deadline of December -- global investment banks will be allowed to apply to establish wholly owned units on the mainland. The titans of Wall Street and Europe, from Goldman Sachs and J.P. Morgan to UBS, are all rushing to expand in the country.

Nomura has moved quickly, too, establishing a wealth management joint venture in Shanghai last year, soon after the government signaled it would allow foreign control. Niwa thinks this was a smart move, though he expects it will take at least "a decade" to bear fruit. 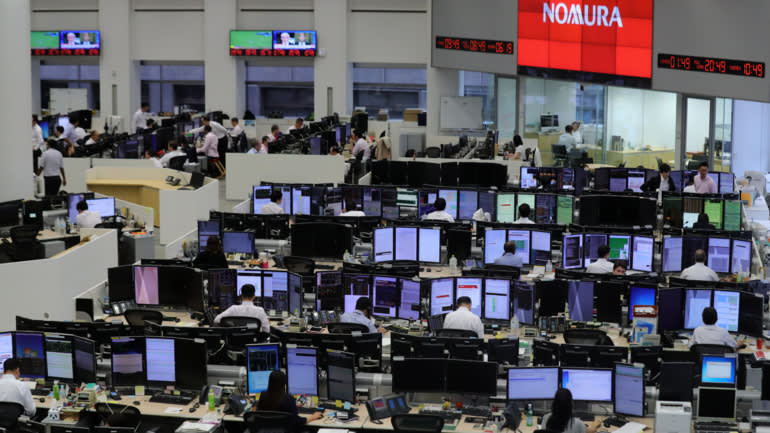 Nomura's trading floor in Tokyo: The company is under pressure as rivals cut commissions. (Photo by Ken Kobayashi)

Some analysts are skeptical because China still maintains tight controls on both capital and information.

"The authorities would feel uneasy about Chinese people investing in Japanese stocks because it means a capital outflow," said Kokichiro Mio, China analyst at NLI Research Institute in Tokyo. Furthermore, "Global investment services won't be possible without offering information about the world, but would Beijing allow that?"

A more realistic opportunity may lie in helping Japanese clients invest in mainland stocks and Chinese government bonds. Global stock investment indexes tend to be underweight on China, though this is changing given the country's proportion of the world economy -- 15%, second only to the U.S. at 24%, according to the International Monetary Fund and NLI Research.

A recent thaw in relations between Japan and China has fueled talk of a possible direct link between the stock markets of Tokyo and Shanghai, akin to the Shanghai-Hong Kong and Shanghai-London Stock Connect systems. Mio said brokers like Nomura would stand to benefit.

Nagai, who is passing on his vision of an Asia-based global financial group to Okuda, has stressed it cannot be achieved without a strong footprint in mainland China.

The problem for Okuda will be that his rivals are just as keen on China. Goldman Sachs has made plans to double its headcount on the mainland to about 600 in five years, according to sources close to the company. UBS, too, intends to double the number of investment bankers at its Chinese joint venture over the next three to four years.

As Mitsubishi UFJ Morgan Stanley's Tsujino put it, "There is no guarantee that Nomura will win in the Chinese market."