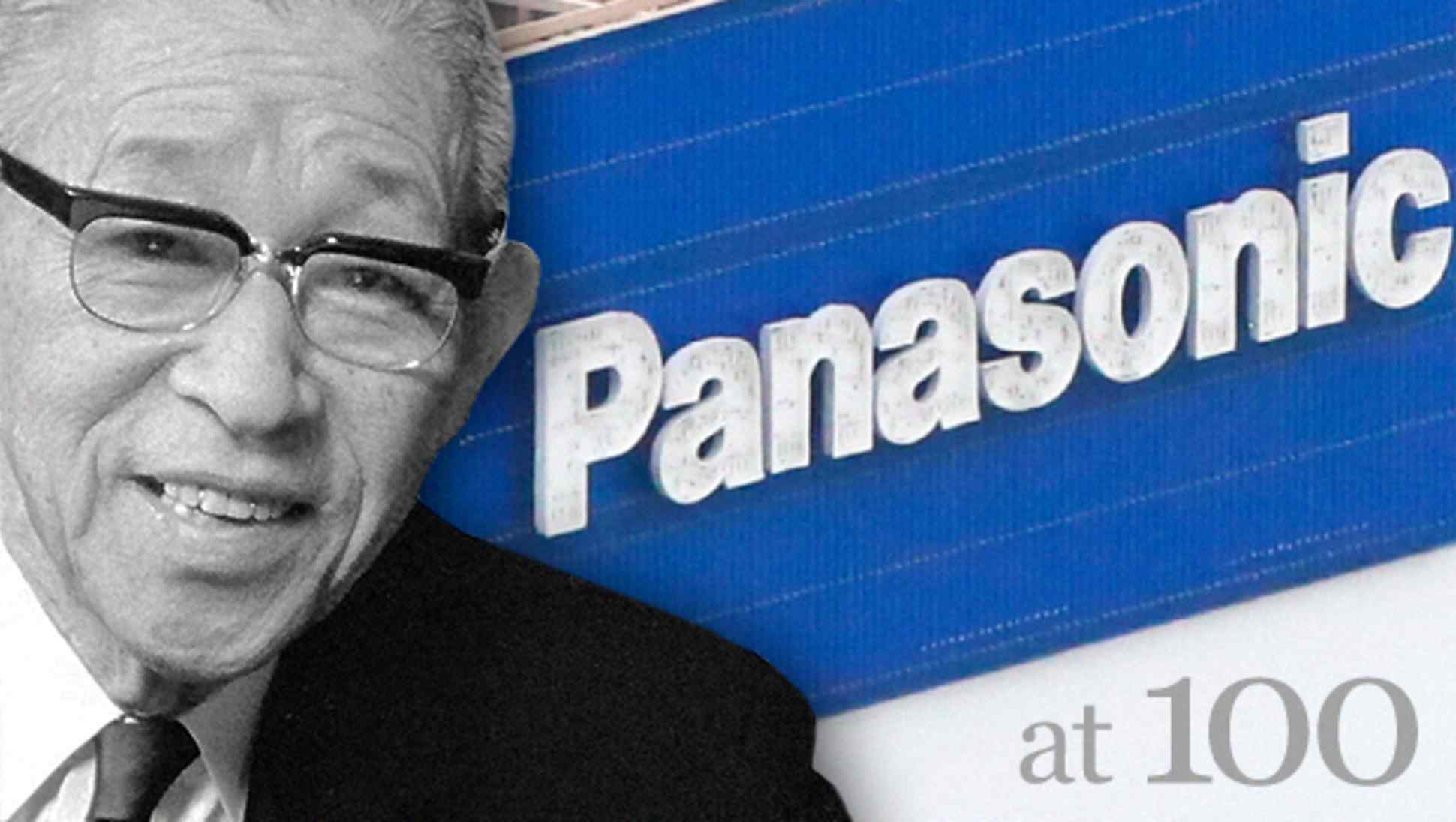 TOKYO -- It has been a long road back for Japan's storied electronics giants. Hitachi took 23 years to beat the operating profit record it set for the year ended March 1991, at the tail end of the economic bubble era. Sony needed 20 years to beat its bubble-era high, while Mitsubishi Electric did it in 17.

Panasonic? The company is still working on it.

March 7 marked 100 years since founder Konosuke Matsushita started his own business in a rented house in Osaka, alongside his wife and brother-in-law. He built the lamp socket supplier into a home appliance empire, earning the nickname "God of Management" along the way. But as Panasonic embarks on a new century, it is struggling to find its footing on a new growth path.

The company's operating profit has yet to rise above fiscal 1984's record of 575 billion yen ($5.4 billion at the current rate). That was when sales of VHS video players were booming.

By 2012, when Kazuhiro Tsuga became the company's eighth president, the red ink had swelled to a staggering degree. Panasonic posted a net loss of 772.2 billion yen for the year ended that March. Tsuga immediately launched a restructuring drive, stopping the bleeding with drastic measures like axing the plasma TV business. Yet Panasonic's projected operating profit of 350 billion yen for the fiscal year through March 2018 is still only 60% of its peak.

Although Panasonic's problems coincided with a downturn in Japan's economy, the roots of its problems seem to run deeper.

Kunio Nakamura, who became the sixth president in 2000 and is now an executive adviser, had seen the writing on the wall in 1995 while working for the group's U.S. unit.

Microsoft's release of the Windows 95 operating system came as a shock to him. Using an internet-connected computer running the OS brought Nakamura to a startling conclusion: A digital revolution would soon replace the analog TVs that had long been Panasonic's mainstay products. Around that time, though, there was little sense of urgency at Panasonic headquarters in the western prefecture of Osaka. Managers and employees alike tended to focus only on domestic rivals. And the company's model -- centered on selling appliances to consumers, one at a time -- left it with few opportunities to accumulate knowledge about networking and digital technology.

As president, Nakamura pursued drastic reforms of his own. But Panasonic's slow response to the changing business environment, combined with a stronger yen and increased competition from South Korean and Chinese rivals, have all contributed to its struggles.

Tsuga, the current president, is now attempting a major strategic shift. This was obvious at the annual Consumer Electronics Show in Las Vegas in January. Gone were the TVs and audiovisual devices Panasonic used to display -- the company showed no consumer products. Instead, one exhibit was an electric concept car with the side cut open to let visitors peer inside. Panasonic also showed robots for industrial use, demonstrating what it can do for corporate customers.

Asked by U.S. reporters to briefly describe his company, Tsuga replied: "What kind of company Panasonic is ... To be honest, I have been asking this question myself."

Panasonic's new growth areas might be described as "backyard" businesses -- the company supports corporate clients behind the scenes. This includes supplying sensors and electric vehicle batteries to automakers, and delivering air conditioners and video conferencing systems for offices. 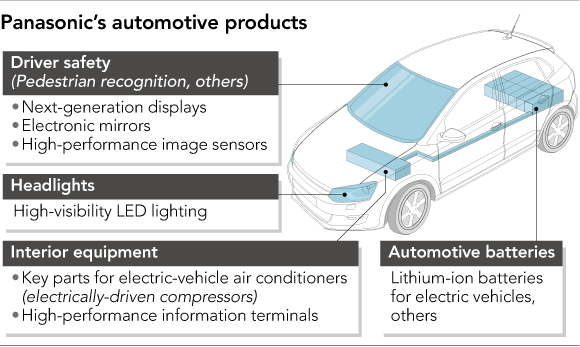 While Panasonic is still a prominent home appliance brand worldwide, the ratio of backyard operations in total sales has been increasing. In fact, for the current fiscal year, the automotive and industrial systems segment is expected to post 2.74 trillion yen in sales, 34% of total and beating the 2.57 trillion yen projected for appliances.

Consumers may think of Panasonic as a TV and refrigerator maker, but this perception no longer reflects its true nature. Automotive and industrial systems cover mainly in-car multimedia equipment, electrical components and lithium-ion batteries.

In another new endeavor, Panasonic is testing automatic checkout technology for retailers in partnership with Trial, a chain of discount stores based in Japan's southwestern city of Fukuoka. This is an ambitious attempt to create a Japanese version of Amazon.com's cashless convenience store concept, Amazon Go. In a demonstration, radio frequency identification, or RFID, tags were placed on 400 items, from sweets to stationery. The tags -- which Panasonic supplies, along with other equipment -- allow customers to simply walk through the checkout lane to pay.

"The checkout process takes only five seconds on average," said Hiroyuki Aota, a Panasonic executive officer. "It would be a big help to retail stores with few employees."

Even as business-to-business operations show promise, however, there are pitfalls.

The needs of corporate customers change quickly. Panasonic's in-flight entertainment system segment is a case in point. The company boasts a global market share of over 70%, and until recently Tsuga hailed the division as a sustainable business model. But demand has plateaued in the current fiscal year.

Airlines, particularly budget carriers, are implementing "bring your own device" policies to cut costs. Passengers access entertainment from their own smartphones or tablets, rather than watching movies on seat-back screens. Through thick and thin, at least one aspect of Panasonic has survived for the past 100 years: the management philosophy of its founder. Matsushita's teachings continue to strike a chord. His book "The Path," first published in 1968, has been reprinted 185 times since his death in 1989. Over 5.2 million copies have been sold in Japan; it has also been translated and published abroad.

Some might argue that his "tap water philosophy" lost its luster as the economy developed. This idea is based on Matsushita's conviction that a manufacturer's mission is to make goods as plentiful and affordable as tap water, to banish poverty.

But even now, as it veers more toward business solutions, Panasonic is pursuing a modern version of the tap water approach with its home appliances. Rather than selling devices individually, the company aims to sell comfortable living spaces, filled with clusters of connected appliances.

Broadly speaking, the rise and decline of Panasonic corresponds with the country's economic expansion and contraction phases over the last century. One might even say the company is a microcosm of Japan. Where will it go from here? 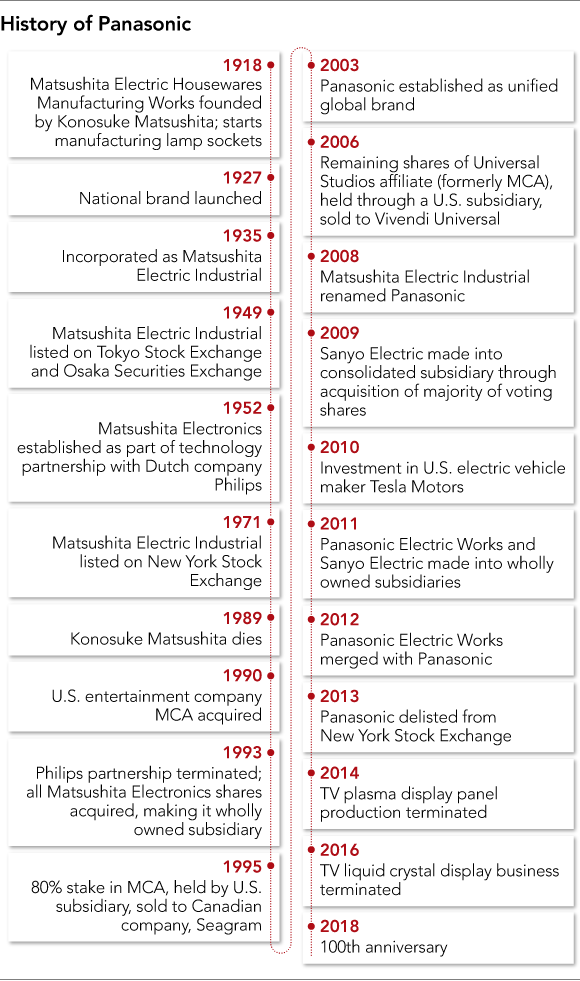