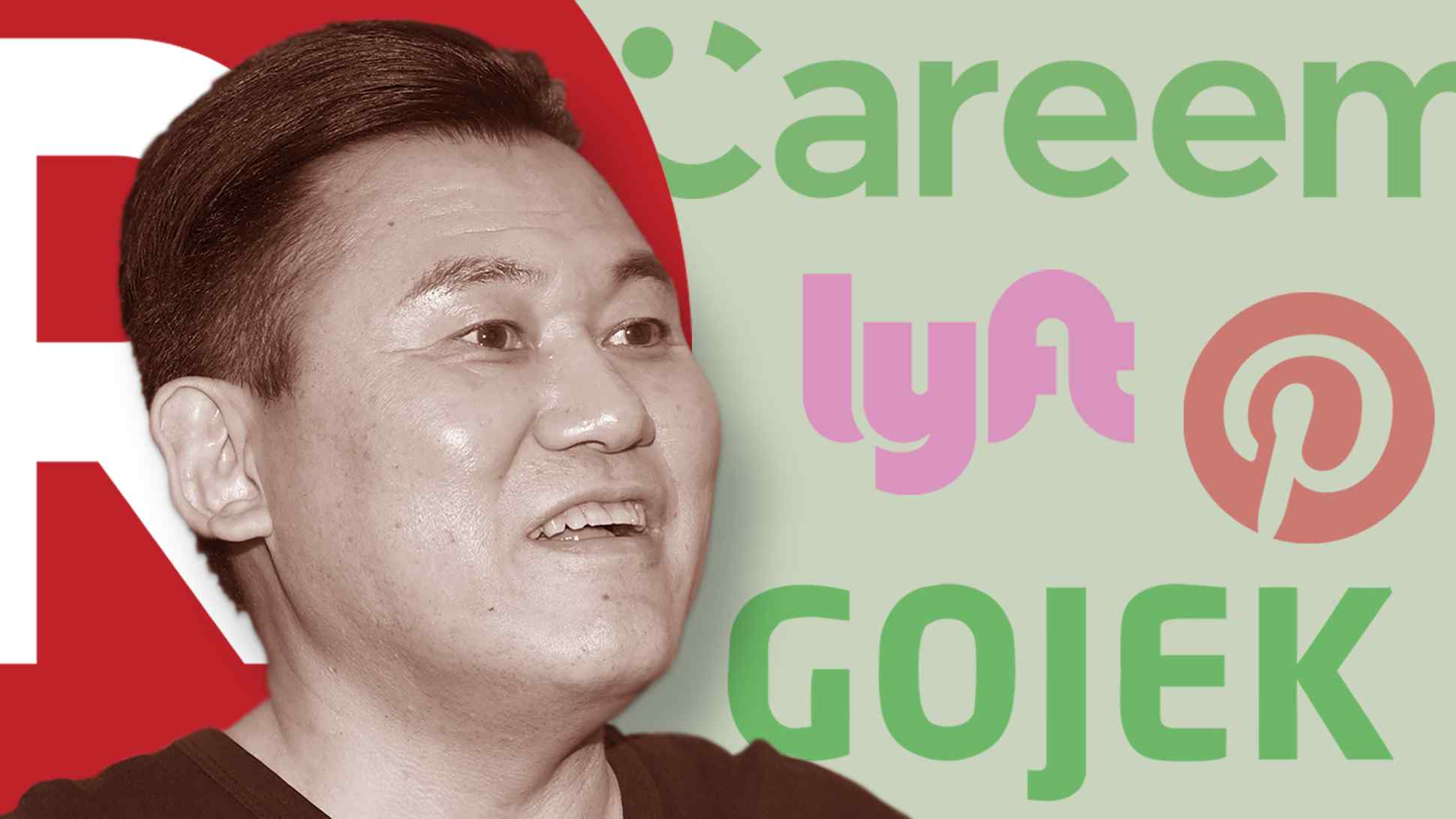 TOKYO -- When Lyft shares start trading in New York on Friday, one of the biggest beneficiaries of the U.S. ride-hailing giant's IPO will be more than 10,000 km away in Tokyo.

Rakuten, the online mall operator known as Japan's answer to Amazon, is rarely thought of as an investor in the same vein as its compatriot SoftBank Group, which has poured billions into ride-hailers, artificial intelligence and myriad technology companies worldwide. Yet Rakuten, too, has quietly amassed stakes in more than 40 tech companies -- Lyft included.

The company insists that investing is not its core focus. But its actions tell a different story and raise an intriguing question: Is Hiroshi Mikitani, Rakuten's chairman and CEO, hoping to offset headwinds in its online commerce business by taking a leaf out of SoftBank's strategic handbook?

Rakuten's bet on Lyft is paying off handsomely. Since 2015, Rakuten has pumped about $700 million into the ride-hailer, taking a 13% interest. That stake is worth $2.26 billion, after Lyft priced its IPO at $72 a share on Thursday. Though Rakuten has already factored in past gains in Lyft's valuation, analysts expect the IPO to add hundreds of millions of dollars in paper profits.

As of December, Rakuten said its overall investment holdings were worth about $3.3 billion. That is equivalent to a quarter of its current market capitalization, and the stock market is starting to suspect Rakuten's portfolio might be far more valuable than previously thought.

Rakuten's attempts to expand globally in e-commerce have been widely considered unsuccessful. But the returns from its portfolio of investments have created "a changing perception that Rakuten is capable of investing," said David Gibson, an analyst at Astris Advisory Japan. Since the beginning of 2019, Rakuten's own stock price has soared more than 40%. 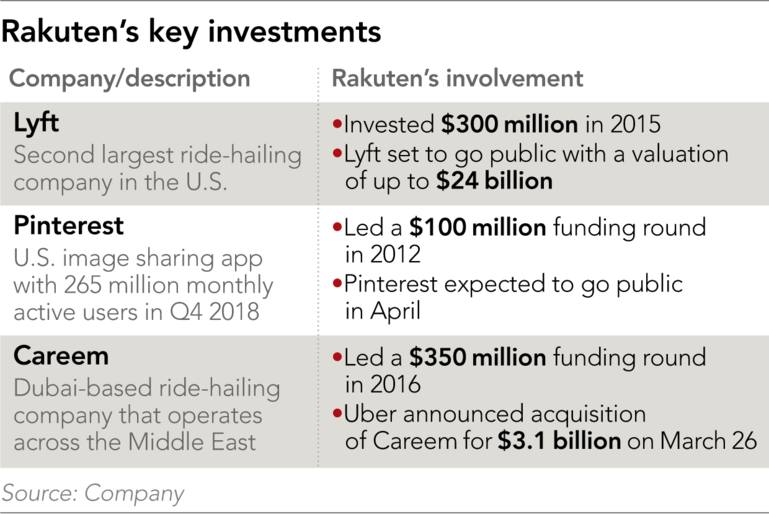 People who know Mikitani say the billionaire businessman has always seen SoftBank's founder Masayoshi Son as a personal rival. Like Son, his ambition has been to create a global tech giant and, in recent years, Rakuten has built a professional investing business focused on technology. In 2013, it set up a corporate venture capital arm. It later added funds dedicated to financial technology and e-commerce, and integrated the portfolio under a team that operates in Singapore and Tokyo. By doing so, it aims to bring discipline and consistency to what was once considered an unpredictable deal-making business.

"We focus our efforts on maintaining an optimal portfolio," a Rakuten spokesperson said.

The investment team woos prospective entrepreneurs with the promise not only of capital but of operational collaboration in a business that is not only an e-commerce juggernaut in Japan but one of the country's largest credit card companies. Meanwhile, assets like the messaging app Viber are available worldwide.

That strategy is beginning to bear fruit at a critical time for the company.

The Lyft windfall comes as Rakuten's foothold in the Japanese e-commerce market is slipping, due to pressure from Amazon and other rivals. Rakuten is now diversifying into telecommunications and is set to join NTT Docomo, KDDI and SoftBank and as Japan's fourth mobile network operator this year. But skeptics say it lacks the firepower to compete with the established trio.

Mikitani, in another parallel with SoftBank's Son, is regarded as a maverick in corporate Japan. The former banker set up Rakuten in 1997 based on a business plan he designed with a friend while attending Harvard Business School. He has since built a sprawling "ecosystem" of more than 70 services spanning travel bookings, credit cards and stock trading services, most of which were patched together through acquisitions. They have been financed by cash flow from its e-commerce business, as well as through new share offerings.

Rakuten's roughly 100 million members can access these and other services with a single ID, and to lock them in, the company rewards loyal customers with points that can be redeemed on its sites. Using a Rakuten credit card to shop on its online mall, for example, can generate twice as many points as paying with a conventional card.

At the same time, Mikitani has always been keen on overseas deals. In 2005, Rakuten acquired LinkShare, a U.S. affiliate marketing company. Other investments have included Thai e-commerce site Tarad.com and French peer Priceminister.

In 2010, Mikitani cemented his anti-establishment image -- and underscored his global aspirations -- when he declared that English would be the official language in Rakuten's offices.

The larger plan has long been to export the Rakuten ecosystem and corral customers around the globe, but this has proved difficult. Unlike in Japan, where Rakuten pioneered the e-commerce business, expanding into new markets often means confronting Amazon and local rivals. There were other challenges as well, such as insufficient logistics infrastructure in emerging economies. By 2016, it exited Southeast Asia and some parts of Europe. Nevertheless, Mikitani has doggedly built connections and name recognition in the U.S., Europe and elsewhere. He invites investors and entrepreneurs to his residence in Silicon Valley for barbecues and golf every year. Rakuten paid a record 220 million euros ($250 million) for a four-year sponsorship contract with Spanish soccer club Barcelona in 2016, and followed up in 2017 by entering a pact with the Golden State Warriors, an NBA basketball team.

Mikitani picks winners in sports, too: Barcelona and Golden State have both won their league championships in three of the past four seasons.

Credit Suisse analyst Keiichi Yoneshima said Mikitani's efforts have been worthwhile. "There was much more risk-taking in the early days," he said. "Recent investments are in well-known companies with better chances of success. It means [Mikitani] is getting access to good deals."

Rakuten's list of holdings encompasses AI, financial technology and other sectors. It has interests in companies as diverse as Go-Jek, the Indonesian app for ride-hailing and other on-demand services; Kreditech, a German online lender; and Folio, a Japanese asset management startup. Last year, it made a rare investment in China, leading a $50 million funding round for e-commerce startup Blackfish Technology.

Many of Rakuten's targets are still unproven, and its market capital of roughly $13 billion is far behind SoftBank Group's $106 billion. But the company's rising stock price suggests the market has picked up on the similarities to SoftBank.

During Mikitani's stint in banking, one of his biggest clients was Masayoshi Son. The SoftBank chairman and CEO was an early investor in Alibaba, and many analysts now say the stake in the Chinese e-commerce juggernaut is SoftBank's most valuable asset.

SoftBank has since launched the $100 billion, Saudi-backed Vision Fund, which generated more than 40% of the group's operating profit for the April-December period. Son has made no secret of his intention to transform SoftBank into a pure investment holding company.

Mikitani has denied that this is the future of Rakuten. "SoftBank wants to become the next-generation Warren Buffett, which is a very respectful initiative," he said in English at a company conference in 2017. "That's not what we want to do. We want to become a unique service company in the world."

The company hopes its range of investments will open up new avenues for spreading the Rakuten ecosystem. "While generating returns is the priority, we are constantly looking for new trends in technology and how it can add value to our existing business," said a spokesperson. The biggest challenge will be to balance the desire to invest, expand and diversify with the need for cold, hard cash.

Rakuten sold 15.5 billion yen worth of its securities holdings last year, up from 4.4 billion yen a year earlier. Analysts say the company is hungry for funds to fight its e-commerce competitors in Japan. Amazon has become an even more serious threat by dangling benefits to subscribers of its Prime membership plan, which includes free shipping at a time when delivery costs are rising. Since Rakuten is a marketplace, delivery costs vary by each seller.

Some industry watchers say Amazon's membership program is more appealing, and Japanese consumers seem to agree: Rakuten fell behind Amazon in the market in 2016, according to Euromonitor, and the gap has widened since.

The new mobile business also requires cash, though Rakuten insists the latest technology will limit the burden. Rakuten is budgeting about 600 billion yen for this through 2025 -- roughly what the top players spend in a single year. But since the system is new, investors are taking a "wait-and-see approach," said SBI's Moriyuki. They want to be sure the service, scheduled to launch in October, actually works.

So Rakuten faces the dilemma of whether to nurture its promising investment arm into something bigger, or cash out.

It may not have much time to make the decision. Private tech giants likes Uber, Slack Technologies, Airbnb and WeWork are reportedly lined up for IPOs in what looks to be one of the biggest years for listings in the U.S. since the dot-com bubble burst in 2000. Meanwhile, "valuations of 'new economy' companies coming out of China are being pushed back," said Arun George, an analyst at London-based Global Equity Research. "I think the trend is only going to get worse."

But scaling down the investments would leave Rakuten with less room to work with overseas startups -- and potentially rob Mikitani of his best chance to build the global business ecosystem he always wanted.