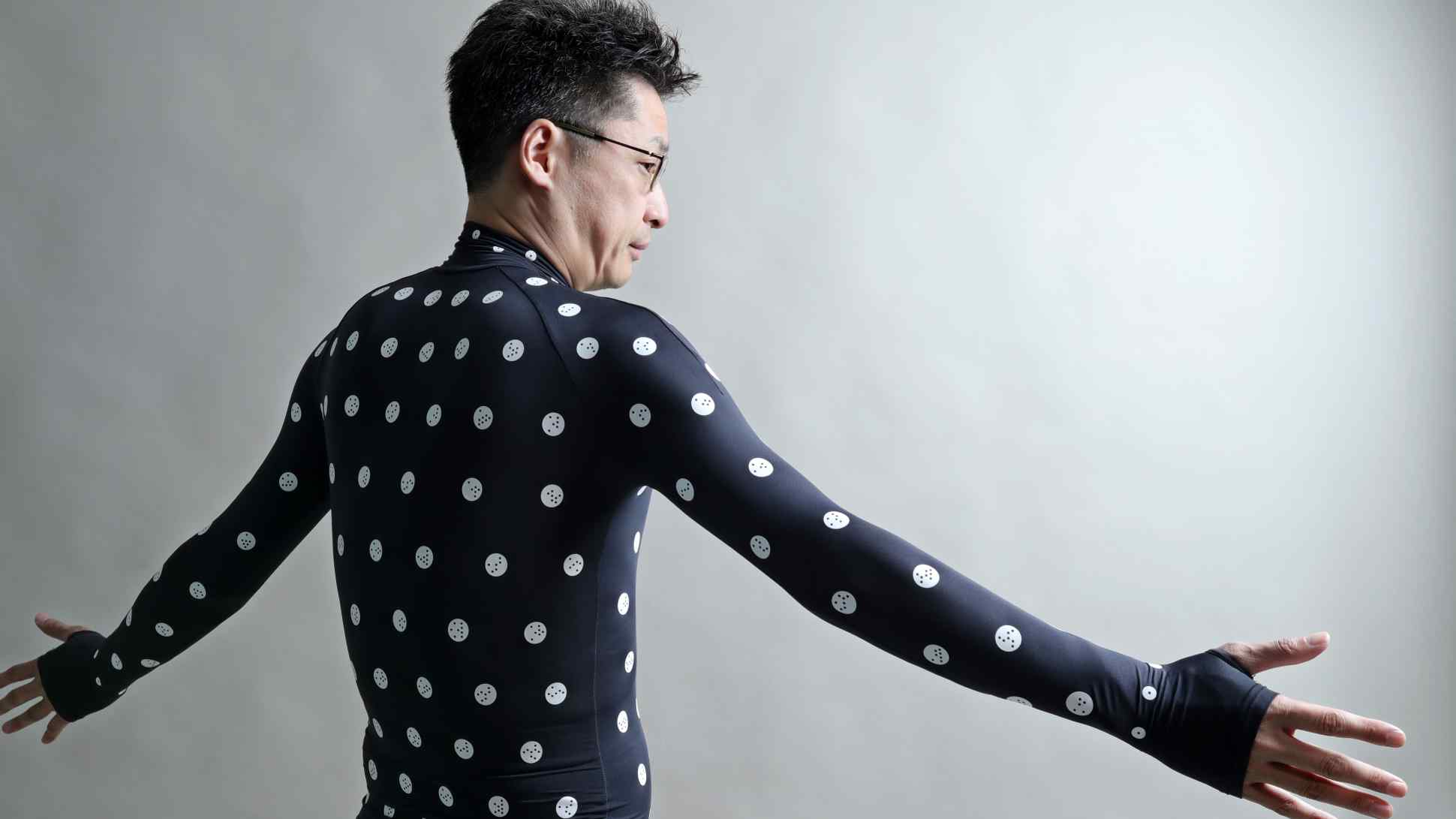 Tokyo resident Atsushi Kumon models his Zozosuit. Using the Zozotown app, he sets up a smartphone to take 3D images of his body, with 18 measurements from neck to ankles. (Photo by Ken Kobayashi)
Company in focus

Robotic tailoring is the future for online retailer Start Today

TOKYO -- Japanese online fashion mall Start Today is offering a future that begins with customers donning a black-and-white polka dot bodysuit and rotating in a full circle while being photographed by a smartphone.

The reason for this curious ritual: The polka dots on the garment, called a Zozosuit, and the company's app work together to record the wearer's measurements.

"I didn't believe it would work," said Tokyo resident Atsushi Kumon when he received his Zozosuit in May. He put the suit on, opened the company's Zozotown app and followed its robotic voice instructions, which told him to put the smartphone on a stand and move two meters away. Then, it asked him to rotate like a clock and started taking pictures.

When Kumon, 43, looked at the smartphone a few minutes later, the screen showed a 3D image of his body with 18 measurements from neck to ankle, down to millimeter scale.

Start Today launched the Zozosuit last November, enabling customers to take precise measurements of their own body. The suit is free -- its primary aim is to sell the company's private label line, Zozo, whose clothes are designed to fit each person perfectly.

Kumon was surprised when he put on a pair of Zozo jeans, which he bought for 3,800 yen ($34.50). "The waist size is just right," he said, pointing to his belly, which contrasts with his overall thin frame. "Not having to try on clothes is great." Zozo, which now offers jeans, T-shirts and business shirts, is the centerpiece of Start Today's bid to transform the fashion industry. In its ambitious three-year plan unveiled in April, the company said revenue is expected to grow four times over the next three years to 393 billion yen ($3.57 billion) in the fiscal year ending March 2021, with 90 billion yen in operating profit. A large part of that growth will come from the private label, which is expected to generate 200 billion yen in revenue, of which 40% will be outside of Japan.

"We will become one of the top 10 global apparel companies in the world," founder and CEO Yusaku Maezawa told analysts at the time. If that prediction proves accurate, the company will join the ranks of Uniqlo owner Fast Retailing, Zara owner Inditex and luxury conglomerate LVMH.

The Zozosuit is meant to solve a common problem that turns customers away from shopping for clothes. Size has always been a bottleneck in e-commerce, where customers cannot physically try on clothes. Made-to-measure clothes are usually expensive and time-consuming. Maezawa, who admits to having difficulty finding clothes to fit his self-described short legs, believes that making size-fitting easier and more affordable will boost customers' confidence and "make them want to try more items."

If his strategy is successful, it could represent a breakthrough for Japan's fashion industry, which flourished before the 2000s but has since struggled to open up wallets amid a prolonged economic decline. Avant-garde designs have been replaced by inexpensive fast-fashion brands. Start Today, which has carved out a unique market by matching trendy brands with picky customers, is looking to shake up the industry by moving into manufacturers' turf.

Of the customers who received a Zozosuit, 60% actually used it to take their measurements and half of those purchased a Zozo product. "The experience [of purchasing Zozo] itself is fun," Maezawa told Nikkei in a recent interview. Zozo clothes currently are manufactured in partnering factories in China, chosen for their willingness to invest in cutting-edge systems, but "I'm thinking of doing it on our own," he said. "It would be fun to make a solely automated factory in Japan." 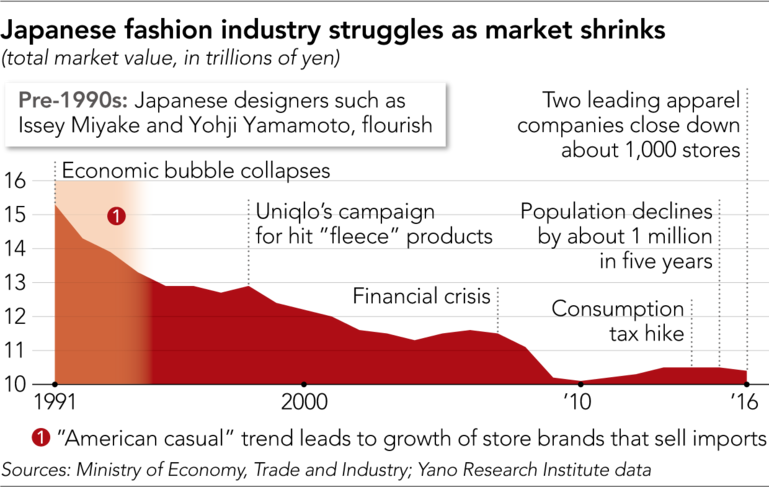 Maezawa, a former drummer in a rock band, founded Start Today in 1998, selling his favorite records and CDs through mail-order sales. He eventually extended the business to fashion items and in 2004 launched Zozotown. The name Start Today comes from the title of a song by American punk band Gorilla Biscuits.

"Nobody thought we could sell fashion online," recalled Masaaki Yajima, director of the e-commerce department at clothing retailer Beams. The Japanese store brand was one of the first major companies to sell clothes through Zozotown, along with other brands such as United Arrows, in 2005.

Yajima said that one reason for its success was that the website offers an experience close to that of real stores. It presents fashionable images that make it easier for customers to imagine how products could be worn. Products are accompanied by detailed explanations on seasonal trends and material textures. Start Today also standardizes sizes that differ between various brands to prevent the confusion that is common in online shopping.

Its ability to gather the trendiest brands and combine it with the convenience of online shopping, which was still new at the time, catapulted Start Today into one of the world's most successful online fashion retailers. Thanks to its unusually high profitability, which derives from the high commissions it charges brands for selling their products on its website, its market cap is now some $12 billion, four times that of Japan's biggest department store operator, Takashimaya. The success has also turned 42-year-old Maezawa into one of Japan's youngest billionaires, with a net worth of $2.7 billion, according to Forbes. He grabbed international headlines last year, when he bought a painting by the late American artist Jean-Michel Basquiat at an auction for a record $110.5 million.

But while Start Today is a well-known brand domestically, it is largely unknown outside Japan. "We were relying too much on domestic success," Maezawa said at an analyst meeting in April.

Zozo is not the company's first overseas venture. In 2011, it set up Zozotown's own pages on Alibaba's e-commerce site Tmall, known then as Taobao Mall, in China and eBay in South Korea. Both sites were eventually shut down after failing to gain traction. "Zozotown is not well-known abroad, and people were probably not so interested in Japanese brands," said Takahiro Kazahaya, senior analyst at Deutsche Securities.

Maezawa nurtured the private label concept for seven to eight years, a company spokesperson said, adding that he gathered a team and hired pattern makers and sewing operators about three years ago. "It took time to produce something that met our standards."

Start Today plans to launch its Zozosuit and private label in 72 countries beginning in July, and it has set up subsidiaries in Germany and the U.S. Success in overseas markets is crucial, analysts say, considering Japan's shrinking population.

But Zozo has not been without its problems. Before introducing the Zozosuit's polka dot design, the initial bodysuit had a more futuristic look and it was equipped with sensors that could detect measurements with ease. But StretchSense, the New Zealand-based company behind the technology, could not produce the suits on a mass scale. Faced with a huge backlog of orders, Start Today scrapped its partnership and its plan to acquire the startup.

"Unfortunately, demand was much greater than supply and Start Today decided to change to a different technology and move production elsewhere," Ben O'Brien, StretchSense's CEO, told the Nikkei Asian Review by email. "The cancellation of this project has meant that we have had to make 140 roles redundant. This has been an incredibly tough time for us and our team."

The shift cost Start Today some 4 billion yen, according to the company. It announced the new version of its bodysuit in April, based on a technology developed by three researchers, which it purchased for 300 million yen. Their identities are being kept secret. Still, though more than a million Zozosuits have been ordered, some customers will have to wait until July for delivery.

The revenue target of the private label during its first year is 20 billion yen. Kazahaya, of Deutsche Bank, expects the figure to be closer to 6.4 billion yen, but said, "It would still be a big achievement and by no means low."

The company has disclosed little about how exactly it will launch its products abroad or its supply chains. Some apparel industry observers question Start Today's ability to build its production network at a large scale. "The company said it has secured production, and that prevents the entry of other companies," said Dairo Murata, senior analyst at JP Morgan Securities Japan. This means that it would not be easy for other companies to copy what Start Today is doing. Still, he is highly skeptical of its three-year target.

In the U.S. and Europe, private labels and personalized styling services have become increasingly common for online fashion retailers trying to differentiate themselves.

Zalando of Germany launched its private label unit in 2010 and has developed a portfolio of 17 original brands. San Francisco-based Stitch Fix, which listed on the Nasdaq market last year, sends clothes curated by stylists and computer algorithms based on questionnaires filled out by shoppers. And then there is Amazon, which is making a push into fashion, including in Japan, where it recently set up a 7,500-sq.-meter photo studio in Tokyo.

A personalized yet large-scale private-label brand is unprecedented. Initial mishaps have not capped the excitement in Start Today -- the stock jumped 8% on the trading day after the new version of the bodysuit was announced. When the company announced its third clothing offering -- business shirts for men -- on June 6, shares hit another all-time high.

In a sign of its commitment to the new private label venture, Start Today in October will change its name to Zozo -- a coinage from the Japanese word "sozo," which has two meanings: creation and imagination. Start Today founder and CEO Yusaku Maezawa, a former drummer in a rock band, is one of Japan's youngest billionaires, with a net worth of $2.7 billion, according to Forbes. (Photo by Hideki Yoshikawa)

Maezawa, who has advocated for shorter working hours for his employees in Japan, where long hours at the office define corporate culture, now appears to be working harder himself. Previously, he typically appeared in the office three days a week.

The company spokesperson said, "He recently has been here five days a week."

Maezawa's unconventional style has drawn some detractors. But, as he once responded on Twitter, "I will stand [against the critics] and definitely gain recognition [from them] some day." 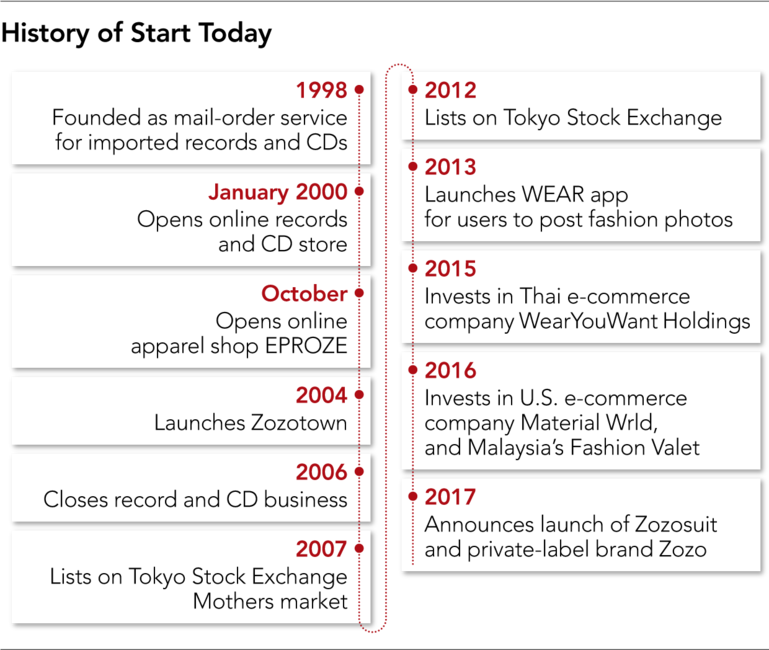