BANGKOK -- When the Pla Lung 1 fishing boat glided out of a port in eastern Thailand in late February, it was loaded with symbolism. Thai Union Group, the world's largest canned tuna supplier, had spruced up the vessel to show it was serious about better working conditions following a "yellow card" warning issued by the European Union in 2015.

The overhaul was a stark reminder to emerging markets companies that the price of operating in advanced Western markets is compliance with international safety and environmental standards. The EU had determined in 2015 that the Thai fish industry was failing to combat Illegal, Unreported and Unregulated (IUU) fishing.

Three years on, the voyage of the Pla Lung 1 amounted to a declaration of intent: a chastened Thai Union was ready to embark on a new phase of growth in Asia, especially China, where consumers are switching to high-end seafood.

Over the past few years, Thai Union has expanded mainly through acquisitions of fisheries companies in the U.S. and Europe. In 2017, as a result, Western markets accounted for about 70% of the company's global sales. But with that presence comes an intense scrutiny of its supply chains, and what critics see as ethical and sustainability problems.

Greenpeace, a nongovernmental environmental organization, also pursued Thai Union and other Thai seafood companies in 2015, accusing them of abusing workers, especially those from Myanmar. The organization went so far as to call for a boycott of Thai Union products. John Hocevar, U.S. oceans campaign director at Greenpeace, said the company and some of its peers were associated with "slave labor." But after the two sides reached an agreement last July, Greenpeace officials have paid regular visits to Thai Union's headquarters to monitor progress.

The Pla Lung 1 that set sail in February was a standard Thai fishing boat transformed into a modern one, equipped with a clean toilet, a shower room, a kitchen and even rest and leisure areas. Not everyone was impressed: Facebook and Twitter posts were awash with critical and skeptical comments. "It seems like a pretty basic place to start," one individual wrote. "[I'll] believe it when it happens ... I have little faith in their words," wrote another.

Thai Union CEO Thiraphong Chansiri sounded a more positive tone a few days later at a ceremony for its 40th anniversary in Bangkok, emphasizing the importance of working with environmental and human rights groups.

"Thai Union looks forward to continuing to execute our sustainability strategy, strengthened and enhanced by the joint agreement with Greenpeace, along with our other collaborations, to work toward healthy seas now and for future generations," he said.

As for growth, the Thai Union chief discussed the company's strategy in a recent interview with the Nikkei Asian Review, where he stressed the importance of international expansion, especially in China. "For us, what drives growth is [our] product portfolio," Thiraphong said. "We have a bigger portfolio compared with 10 years ago. Asia is very important for our future growth."

Thiraphong suggested that Thai Union's experience in the competitive -- and environmentally conscious -- markets of the West will serve it well.

After going public on the Stock Exchange of Thailand in 1994, Thai Union went on a shopping spree in 1997 with a $97 million acquisition of Van Camp Seafood, a U.S. player known for its Chicken of the Sea brand.

Thai Union went on to buy French canned tuna company MW Brands for $882 million in 2010 and Norwegian rival King Oscar for $52 million in 2014. Western companies were eager to exit the labor-intensive fisheries business, where the scope for productivity gains was limited and heat from environmentalists a certainty. Thai Union stepped in where others feared to tread.

Still, a failed attempt to purchase Bumble Bee Seafoods, the top U.S. canned tuna supplier, in late 2015 prompted a company rethink. The U.S. Justice Department had shot down the $1.5 billion acquisition bid, saying that "consumers are better off without this deal." Thiraphong said mergers and acquisitions are no longer the company's priority. "We believe that our existing businesses should deliver growth," he said in the interview. "We will be much more focused on organic growth."

Despite the strategic shift, though, Thiraphong said Thai Union is not backing down from an ambitious sales target announced before the Bumble Bee deal fell through. The goal is to ring up $8 billion annually by 2020.

China is the key to future growth, driven by the rapid expansion of the country's seafood market. Thai Union aims to increase sales in emerging markets to $200 million by 2020, almost from scratch, with about half of that coming from China.

The Chinese market for seafood has been expanding steadily. Since the 1990s, the rise of China's seafood consumption has been outpacing the global rate, according to the World Food Program. The country gobbled up 36.9% of the world's seafood tonnage in 2013, up from 25% in 1993.

Previously, most fish consumed outside of China's large coastal cities were freshwater species. But higher living standards and an improved cold storage chain have put seafood within reach of the average consumer.

A Japanese food boom has also helped. The number of sushi and other Japanese restaurants serving raw fish in China has soared to around 20,000. 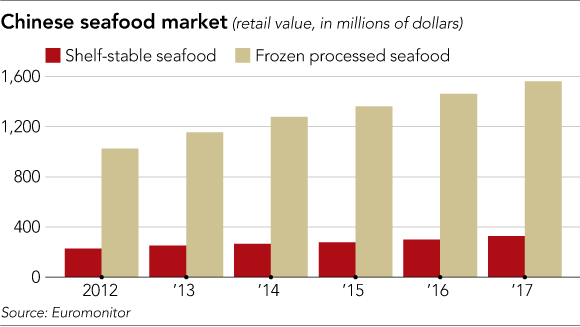 So far, no clear winner has emerged in the $1.5 billion Chinese seafood market. Even the No. 1 player, Fujian Anjoy Foods, controls a share of only about 9% in the frozen processed seafood sector, according to Euromonitor.

Thai Union has had its eye on a bigger slice of the action in China for a while, but it has struggled to secure a foothold. Its first foray came in 2005, through a joint venture with Philippine canned tuna maker Century Pacific Food, which had been doing business in China since the early 1990s. The partnership temporarily controlled the highest market share of China's canned tuna market, but demand did not grow as much as expected.

Chinese consumers have a limited appetite for cold meat and fish, although sushi and sashimi appear to be an exception.

"Consumers in China have deviated from canned tuna and moved toward fresh and frozen tuna, due to the increased health awareness," Research and Markets, an Irish research company, said in a 2017 report.

Thai Union pulled out of the joint venture with Century Pacific Food in 2016 to pursue other options in China.

"They decided to change," said Suttatip Peerasub, an analyst at Maybank Kim Eng. "Now they are even more focused on the Chinese market."

Thiraphong turned to Faisal Sheikh, who joined Thai Union as managing director of emerging markets from U.S. consultancy Booz & Company in 2013, to crack the China problem.

Sheikh sees a promising outlook for live seafood in China. "We have invested in lobster in Canada," he told Nikkei. "And it makes natural sense to bring these lobsters to China and sell them to Chinese consumers."

He was referring to the 2016 purchase of Les Pecheries de Chez Nous, a Canadian lobster processing company in the province of New Brunswick.

As for branding, Thai Union is pushing King Oscar in China, as Sheikh said it is the name that best suits the market. "We communicate online, on TV, in print, and no other seafood brand does that," he said. He emphasized that it is regarded as a high-quality European brand that Chinese consumers appreciate.

"King Oscar is a quality, safe brand," Sheikh said, suggesting it should appeal to customers wary of food safety scandals involving domestic suppliers. The idea is to promote lobsters as the main strategic offering while selling frozen shrimp and salmon under King Oscar as well.

Still, an efficient sales network is as crucial to a company as a smart product strategy.

Sheikh said Thai Union will use both brick-and-mortar stores and e-commerce sites to boost sales in China, but he acknowledged the challenges ahead. "The Chinese online market is very much segmented [across] different platforms," he said, citing services like WeChat, Alibaba and others. "We're present in all those platforms."

Besides market fragmentation, another issue is that many Chinese consumers are reluctant to buy food online, let alone live seafood such as lobsters. To address that challenge, Thai Union has turned to so-called online-offline integration with help from Alibaba Group Holding.

The Thai seafood company teamed up with China's largest e-commerce player last summer. In July, the two started exclusive sales of lobsters at Hema Xiansheng supermarkets, an Alibaba company. After seeing and sampling lobsters at actual stores, consumers can use an app to buy them online and have them delivered.

On Alibaba's Tmall online shopping site, fresh King Oscar lobsters sell for roughly 229 yuan ($36.40), compared with about 100 yuan for most lobsters sold in China. Even at that price, sales have been strong, according to Thai Union.

Separately, French supermarket chain Carrefour is selling King Oscar lobsters at nine of its stores in China. That number is expected to increase to 100.

Sheikh predicted sales in China will double or triple this year compared with last year. Thiraphong remains optimistic about the company's chances of hitting the $8 billion target by 2020. "We still have two more years," he said. "The growth rate will continue on."

Aside from the expansion in China, Thai Union aims to develop new products and bolster its food-service business, which entails supplying seafood to restaurants and hotels and promoting processed products like fish sausages. The core of the service business is Red Lobster -- the world's largest chain of seafood restaurants. The Thai company invested $575 million in the U.S.-based chain in 2016.

Thai Union wants to increase profits in addition to sales. "We focus more these days on profit growth," Thiraphong said. "Costs are also one of the areas we're focusing on. We won't give up until 2020."

On top of the $1.6 billion it has poured into acquisitions in the West, Thai Union has spent large sums to polish its reputation on human rights and the environment. The company shelled out 117.71 million baht, or 2% of its net profit, on philanthropic activities in 2016.

Hard lessons learned, Thai Union may be hoping to make inroads in China without spending too much on corporate social responsibility. But as a major fisheries player, it is likely to face strong pressure to do more to tackle the industry's problems. "The budget for CSR will be increasing," warned Charti Phrawphraikul, an analyst at Phatra Securities.

Either way, Thiraphong said the $200 million sales target for emerging markets is "achievable." 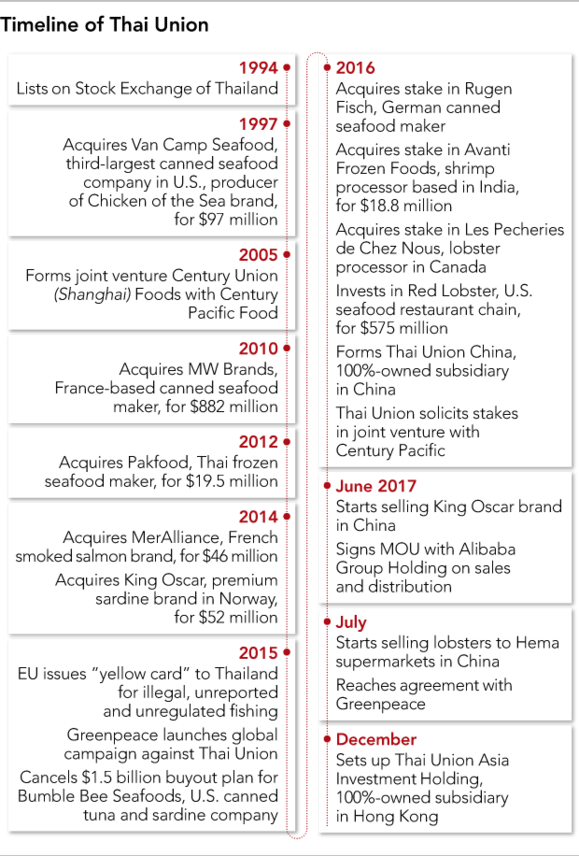