Mitoshi Matsumoto, the franchisee of this 7-Eleven store in Higashi-Osaka, wanted to reduce his operating hours and would not take "no" for an answer. (Photo by Tomoki Mera)
Company in focus

Seven-Eleven rebel lays bare the price of convenience in Japan

HIGASHI-OSAKA, Japan -- Mitoshi Matsumoto was not expecting to shake up the management of Japan's largest convenience store chain and make national headlines. The 57-year-old widower and 7-Eleven franchisee just wanted five hours of his night back.

But when Matsumoto asked Seven-Eleven Japan for permission to close his store from 1 a.m. to 6 a.m., and the retailer demanded that he stay open 24 hours, it set off a chain of events that culminated with the replacement of the company's president earlier this month.

The David-versus-Goliath dispute has also revealed the true cost of the convenience Japanese have come to expect. The big three chains of 7-Eleven, Lawson and FamilyMart are part of the social fabric, with a total of about 56,000 stores offering everything from fresh coffee and bento boxes to ATMs, theater tickets, parcel deliveries and utility bill payments around the clock.

Yet Japan is suffering a severe labor shortage and wages are rising. As a result, franchisees are strained financially. Matsumoto insists something has to give. "Seven-Eleven won't prosper unless they take the interests of franchisees into consideration," he said.

The heart of the issue is Seven-Eleven's fee structure. The company earns a fee on every sale -- with some franchisees saying this can be 60% or more of the gross profit, or the price minus the product cost. The franchisee, on the other hand, only profits after expenses are paid off, including employee wages and the cost of unsold food. Lawson and FamilyMart use similar systems but charge lower fees.

Under this framework, it only makes sense for franchisees to stay open when they ring up enough sales to cover wages. The franchiser, though, benefits as long as there are some sales -- no matter how small.

The typical convenience store employs about 10-20 part-timers to keep the business running 24/7. Now that franchisees are paying more to hire from a dwindling labor pool, the gulf between their interests and those of the corporations is widening. Minimum wages have climbed 14% over the last five years, while consumer prices have risen just 5%.

It is not just the franchisees who are under pressure. The entire business model in Japan is being tested now that the market is saturated, with convenience stores on almost every corner of major cities, in railway stations and villages.

The share prices of Seven-Eleven parent Seven & i Holdings, Lawson and FamilyMart Uny Holdings are down around 20% year-to-date, sharply underperforming the Nikkei Stock Average. But Seven-Eleven franchisees' contracts have given them little room to adjust to business conditions on the ground. They must stock certain merchandise, since the chains want consistency from store to store. Many feel they are not allowed to cut prices even if it means they are saddled with unsold inventory. The company says this is not the case. And, of course, they are generally required to stay open all day, every day.

Matsumoto has only been in the convenience store business since 2012, when he acquired his 7-Eleven franchise in the western city of Higashi-Osaka. Nevertheless, he is acutely aware of the industry's challenges.

After his wife died last May, he took on the task of managing the part-timers on top of the day-to-day store operations. It was hard. Responsible workers are not easy to find when you're offering about 1,000 yen ($9) an hour. Matsumoto found himself working longer and longer hours. So he pushed Seven-Eleven headquarters for permission to close down for five hours.

When Seven-Eleven rejected the request, most franchisees would have simply moved on. Few dare to rock the boat for fear of putting their contracts at risk when they come up for renewal every 15 years. But Matsumoto, who studied in the U.S. for three years after graduating from a Japanese engineering university, is not your average franchisee.

He went ahead and reduced the hours anyway. Seven-Eleven warned he would be violating his contract and could not only lose his license, but also be slapped with a $150,000 fine. That's when Matsumoto took his case to the media.

The result was an outpouring of sympathy for the beleaguered franchisee and a round of condemnation against Seven-Eleven. Some newly emboldened franchisees backed Matsumoto, demanding change.

"Convenience store operators may be making money, but only at the expense of franchisees"

Seven-Eleven Japan President Kazuki Furuya resisted bowing to the rebels, but the company eventually began to relent. In mid-March, it shortened the workday at 10 directly run stores on a trial basis, adopting the hours in its name -- 7 a.m. to 11 p.m. On April 4, the group announced it was replacing Furuya as president, shifting him to the chairman's seat at the operating company.

Seven-Eleven has yet to formally change its policies, but it is showing flexibility. About 100 stores are requesting shorter operating hours.

As the top chain and the pioneer that started Japan's convenience store boom in 1974, Seven-Eleven sets the tone for the industry. It is the largest player, with a market share of 46%. But it was a sheer coincidence that the predecessor of Seven & i, supermarket company Ito-Yokado, entered the market in the first place.

An employee named Toshifumi Suzuki spotted a 7-Eleven store in the U.S. while on a business trip to study the American retail industry. Suzuki was anything but a typical company man: He had been a student union leader and a publishing house editor before he joined Ito-Yokado at age 30 to make money for a movie project.

When he brought the convenience store idea back, he found little support. Nonetheless, he volunteered to negotiate a licensing deal with Southland, the U.S. operator of the chain. Seven-Eleven Japan was born and Suzuki's career took off. The man who started it all: Seven & i Holdings CEO Toshifumi Suzuki, who brought the 7-Eleven chain to Japan, leaves a news conference after announcing his resignation in April 2016.   © Reuters

"The fact that they have a great convenience store operation is a total chance," said Michael Jon Allen, an equity analyst at Jefferies.

Opening 7-Elevens was Suzuki's way of demonstrating that small stores still had a place, at a time when Ito-Yokado's supermarkets were considered a threat to mom-and-pop shops. Some of those family-run stores were turned into 7-Elevens, becoming more productive in the process.

Suzuki, a hands-on executive known for sampling meals and desserts before they went on sale, is credited with many innovations. Looking to adapt the fast food sold at U.S. locations, he came up with the idea of selling rice balls with sheets of seaweed in a separate wrapping, which proved a huge hit.

Franchising enabled rapid expansion, by allowing the company to draw on the capital of franchisees. Seven-Eleven Japan listed on the Tokyo Stock Exchange in 1979 and took over the U.S. licence holder Southland in 1991. While the Seven-Eleven storefront is a familiar sight across Asia, only Japan and part of China are owned by the Japanese company. 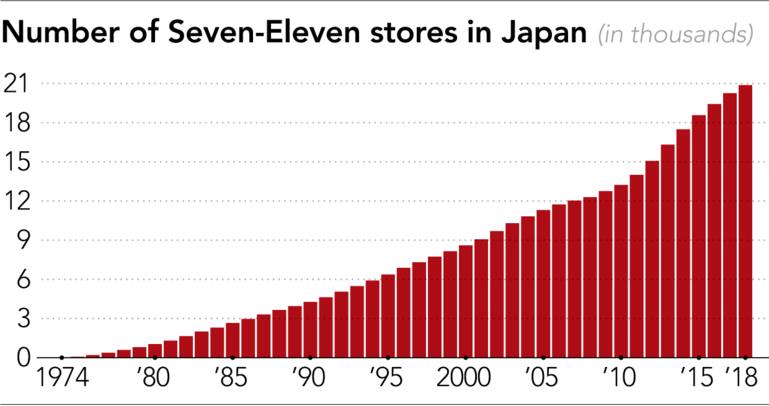 Despite the chain's phenomenal success, Seven & i Holdings remains "a poorly conceived conglomerate retailer," Allen said. "Most of the units earn subpar returns on investment." Third Point, a well-known activist investment fund led by Daniel Loeb, picked up on this.

In 2015, Loeb argued that the convenience store business should be unshackled from inefficient businesses like department stores, supermarkets and general merchandise stores. This prompted Seven & i to scale back its department store segment and shutter 40 supermarkets by 2020.

In 2016, at age 83, Suzuki abruptly stepped down as CEO of Seven-Eleven Japan as well as Seven & i, following a clash with the founding family. He tried to make his son his successor, but investors, board members and the family all rejected the idea.

Even after Suzuki's departure, Seven-Eleven remains highly profitable. But FamilyMart and Lawson are quickly catching up, all three are fighting for the same customers and workers, and the franchisees are getting squeezed.

"Convenience store operators may be making money, but only at the expense of franchisees," said Mitsuko Uenishi, a labor economist at Hosei University. She said the business model is under scrutiny and questioned whether they would continue to rely on cheap labor or switch to automation. 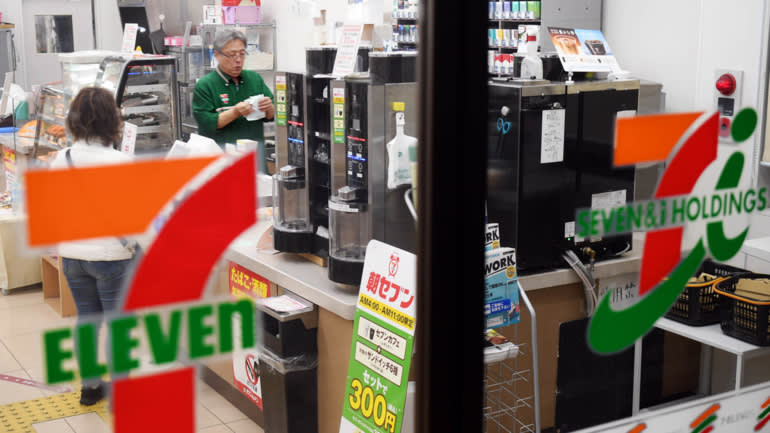 "Someone had to speak up" about the strain on franchisees, Matsumoto said. (Photo by Tomoki Mera)

Lawson has swallowed two straight annual profit declines - and is expecting another this year - as it invests in equipment such as automated cash registers, and multilingual machines for foreign workers.

But it too has recognized that public opinion demands a response to the pressures on franchisees. Sadanobu Takemasu, Lawson's president, stressed that 24-hour opening remained the "basic" form of store operation. But at the same time he revealed that Lawson had already allowed 41 shops to cut hours.

FamilyMart has tried early closings in a few places and plans to experiment more in parts of Tokyo and other selected regions. Several dozen stores are expected to participate.

FamilyMart President Koji Takayanagi told reporters on April 10 that the moves are intended to deal with rising labor costs.

Still, all three chains are likely to resist a wholesale change to opening hours. To do so would require a radical overhaul, not just of labor practices but of the logistics and supply chain that is geared to keeping the shelves stocked 24 hours a day. Shorter hours for more than 100 stores in one area would mean "we will have to fundamentally change the way we do things," said Takemasu of Lawson.

As for Seven-Eleven, the company is hitting the brakes on store openings in favor of enhancing existing outlets to benefit existing franchisees. It will open just 150 stores through February 2020, down 80% on the year, in a strategic departure almost as jarring as cutting hours. Lawson too is slowing expansion.

Matsumoto, meanwhile, is not holding his breath for speedy change. He is skeptical that replacing one president will transform the Seven-Eleven culture. But he says he has no regrets about becoming a franchisee.

"Someone had to speak up," he said. "Maybe I joined this company because I was meant to do this."