A SoftBank mobile shop in Tokyo's Ginza district. The company's initial public offering is the largest in the country's history. (Photo by Ken Kobayashi)
Company in focus

SoftBank: A disruptive force on the defensive

TOKYO -- In early December, shoppers clutching order slips for iPads, refrigerators and other costly goods queued up at Bic Camera's flagship electronics store in Tokyo's bustling Shinjuku district. They were there to take advantage of a jaw-dropping offer.

Anyone making purchases using PayPay, a new smartphone payment app launched by SoftBank and its affiliate Yahoo Japan would be entitled to rebates of 20%. But to add a dash more excitement, one in 40 customers would receive a 100% refund of up to 100,000 yen ($880).

Customers of SoftBank Group's soon-to-be-floated mobile business -- called simply SoftBank -- had even better odds of one in 10.

"It was the first time I used a mobile app to pay, and it was very easy," said a 25-year-old office worker in Shinjuku, who was elated to win a full refund on his 23,900 yen shaver.

On Thursday, PayPay said it gave away 10 billion yen in 10 days, ending a promotion originally designed to last four months.

While the campaign was ostensibly designed to promote the recently launched PayPay, it was also neatly timed to coincide with the listing of the mobile unit. The sale of a 37% stake in Japan's third-largest carrier -- which makes its market debut in Tokyo on Wednesday -- is not only the largest initial public offering in Japan's history, raising funds of $23 billion for its parent, but it also will be the world's second biggest, only narrowly failing to snatch the crown from Alibaba Group Holding by a mere $1.7 billion. The PayPay promotion -- which went viral on social media -- added a helpful buzz to the IPO campaign. It was a reminder of what SoftBank Group, under its founder and CEO Masayoshi Son, is good at: exploiting the breadth of the group's disruptive investments to drive returns. The company has made a billionaire out of its founder by investing early in technology companies such as Alibaba and Yahoo.

But as SoftBank mobile's market debut nears, regulatory headwinds and threats of intensifying competition are dominating the headlines, leaving investors increasingly nervous over the company's prospects.

Some analysts point out that the motive behind the sale of a stake in SoftBank mobile is not to open up the capital markets to grow the business, but to help boost the parent company's value. Son has openly expressed his frustration at the market capitalization of the parent, SoftBank Group, which sits at about 10 trillion yen. This compares with an estimated valuation of 22 trillion yen, excluding net debt, for all the shares it owns in companies and its Vision Fund investment vehicle. The IPO was controversial from the start. SoftBank Group is already listed on the Tokyo Stock Exchange, raising questions about the mobile unit's independence.

"We do not favor parent and subsidiary listings, especially the subsidiary, which is exposed to all kinds of management risks," said one Tokyo-based fund manager.

The decision to sell comes more than a decade after SoftBank Group stunned the market in 2006 by buying the Japanese arm of Vodafone Group, then the world's leading mobile company, in a deal worth 1.8 trillion yen in what was the country's largest corporate takeover at the time.

Son, who had built a reputation as a disruptive force in broadband and online services, had already secured a secret weapon to fight larger Japanese rivals NTT Docomo and KDDI. He had negotiated with Steve Jobs, the late CEO of Apple, to become the exclusive distributor for the iPhone in Japan. When the device hit the market in 2008, customers flocked to SoftBank.

Over the next 12 years, subscribers surged from around 15 million to more than 40 million, giving the company a market share of around 24%. But growth has stagnated in recent years, as the focus has shifted to stabilizing cash generation. For the year ended March 2018, the mobile unit's revenue rose 1.8% on the year to 3.54 trillion yen, while net profit fell 6.5% to 412 billion yen. 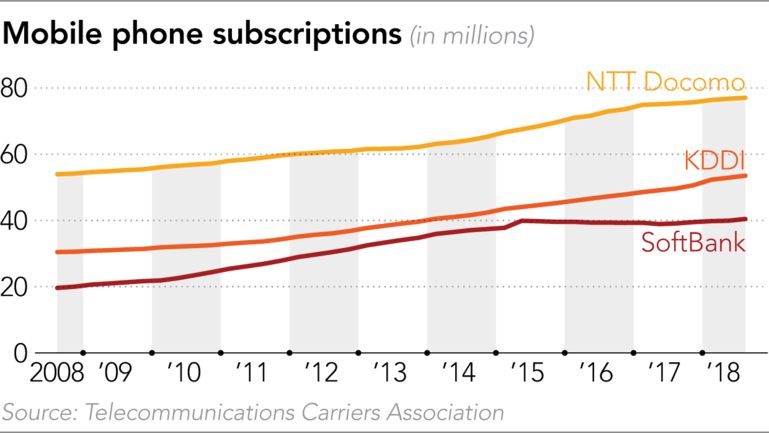 Against that backdrop, Son has been transforming the holding company into an investment vehicle dedicated to next-generation technology like artificial intelligence.

"I have become too conservative, dealing with daily duties even though a paradigm shift has been taking place," Son said in 2016 after he abandoned plans to hand over to former Google executive Nikesh Arora. "We need to be more proactive in dealing with the evolution of technology."

The proceeds from the IPO can help improve its credit rating -- currently ranked as junk -- albeit at the expense of releasing a part of its cash flow. The deal can also give it the financial flexibility to continue making big bets on technology through its $100 billion Vision Fund. But now one of the biggest concerns overshadowing the IPO is an industrywide squeeze on profit margins forecast for next year, amid government criticism of high prices and complex subscription packages. In August, Chief Cabinet Secretary Yoshihide Suga said there was room for mobile service fees to be cut by around 40%.

"Japan used to be a paradise for telecom operators," said one former SoftBank executive. "There is no competitive bidding for spectrum and customers have been tolerant with prices. That may be starting to change."

Docomo responded in October with plans to cut prices by up to 40% in the April-June quarter of 2019 and "return 400 billion yen to customers." The company said it would take five years for operating profit to return to current levels. The announcement took the market by surprise, triggering a sell-off in telecom operators' shares.

The next day, Rakuten inked a partnership with KDDI, the No.2 player, which allows the e-commerce giant to launch a nationwide service as the country's fourth national mobile operator next year. In return, Rakuten will open up its platform to KDDI's various services, such as its payments app. In an interview with Nikkei in November, Rakuten CEO Hiroshi Mikitani promised to "shock the world" with its offerings. 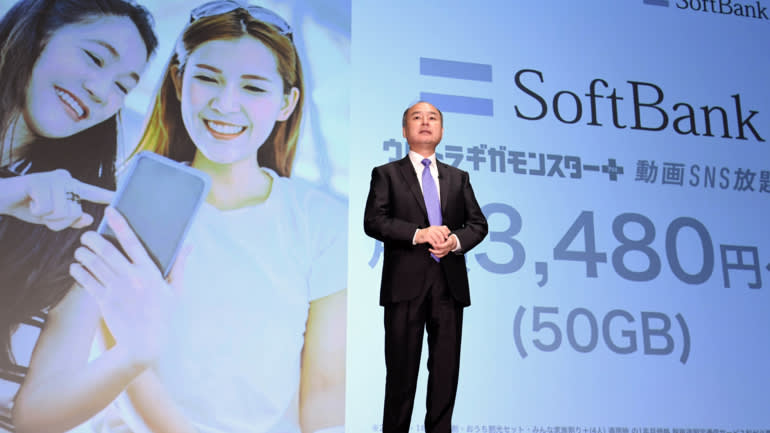 SoftBank Group Chairman and CEO Masayoshi Son at a press conference in November. Son has built a reputation as a disruptive force in broadband and online services. (Photo by Karina Noka)

SoftBank mobile may be particularly vulnerable to this new, more aggressive competition, suggest analysts. Profit margins are "higher than a typical No. 3 player" in other countries, said Chris Lane, an analyst at Sanford C. Bernstein. "This may be because SoftBank is well-run, but it also indicates that [the market] is not as competitive."

The group's global exposure, in contrast to domestic-oriented telecommunications players, has also created a new layer of political risk. Its ties to Huawei Technologies, the Chinese telecom-equipment maker whose arrest of an executive in Canada has sparked fears of deepening U.S.-China tensions, is one example.

After the arrest, the Japanese government issued procurement guidelines that effectively ban public purchases from Huawei and other Chinese vendors. SoftBank, the only Japanese carrier that uses Huawei base stations, now plans to replace existing Huawei equipment and cancel its partnership for the upcoming fifth-generation network.

The parent SoftBank Group owns Sprint, the U.S. mobile carrier currently awaiting regulatory approval for a merger with T-Mobile. The risk of maintaining its ties with Huawei, and going against the administration of U.S. President Donald Trump, is said to have weighed on the company's decision.

At 1,500 yen a share, SoftBank mobile's offer price values the mobile unit at a significant premium to KDDI. The mounting concerns have dented the appetite of institutional investors for the mobile unit's IPO. In a sign of growing investor jitters over the outlook, Sparx Asset Management in October reduced its portfolio allocations to SoftBank Group, citing fresh downward pressure on mobile phone charges. To maximize its appeal to Mr. and Mrs. Watanabe, SoftBank and its underwriters promised high and stable returns. The company is targeting a dividend payout ratio of 85%, well above the 50% paid out by NTT Docomo, the market leader, which translates into a 5% dividend yield.

The campaign also included some highly unusual tactics. Underwriters produced what is believed to be the first television commercial ahead of an IPO for a nongovernment company. One of the lead underwriters, Mizuho Securities, also launched a smartphone app to let customers purchase a single share, instead of the minimum 100 shares required in a conventional listing.

But the turbulence ahead of the listing has illustrated that stability is not something one can expect from Son. It has prompted analysts to question the merits of owning a small part of his strategy, instead of the whole group.

"We admire the financial engineering implicit in this transaction, but our first impression is that we would rather own the seller ... than be a buyer," Lane said.