Murata Manufacturing President Tsuneo Murata expects to cash in on 5G in the coming years but faces the question of what comes next. (Photo by Yuki Kohara)
Company in focus

TOKYO -- Murata Manufacturing may not be a household name, but chances are its products are in your house and more than likely your pocket, too.

The company is a classic example of how Japanese parts makers not only built the country but also formed the backbone of the global electronics industry. Beginning in the 1970s and 80s, these companies followed big consumer brands like Sony, Panasonic and Toshiba into the rest of Asia, creating low-cost supply chains that span the entire region. The question now is how Murata and its peers -- who still produce the guts of the world's smartphones, TVs, cameras and cars -- can forge their own destinies amid continued technological and geopolitical upheaval.

On the surface, everything is coming up aces for Murata. Founded in Kyoto in 1944, as Japan hurtled toward the end of World War II, it has gone from making ceramic capacitors for radios to serving the biggest names in the smartphone business -- Apple and Huawei included.

Its market cap is over 4 trillion yen ($36.7 billion). It is perfectly positioned to capitalize on superfast 5G telecommunications. Analysts say it even stands to benefit from the U.S.-China trade war.

From the very beginning, the business has been at the mercy of booms and busts. Take 5G. Although the technology is just starting to spread, Tsuneo knows it is only a matter of time until orders dry up.

He also fears that, far from profiting from the U.S-China rivalry as many investors expect, Murata will become a vivid window on how the conflict benefits no one.

Tsuneo seems haunted by something his father, founder Akira Murata, wrote in a 1994 autobiography. "It is my view that the electronic components industry is visited by a major recession every 10 years." A Murata plant in Japan's Fukui Prefecture: The company controls around 40% of the global market for multiple-layer ceramic condensers.

Murata's most successful product is not exactly sexy, but it is essential. The company controls around 40% of the global market for multilayer ceramic condensers, or MLCCs -- tiny capacitors that store and release electricity to ensure smooth flows of power in handsets and base stations.

Amit Garg, an analyst at CLSA in Tokyo, estimates that Apple accounts for around 20% of the sales of Murata's main products.

Murata's business has taken a hit as the sun sets on 3G and 4G mobile technology and global smartphone shipments stall. On Oct. 31, it reported a 16% drop in net profit for the first half, and projected an 18% decline for the full year. Nevertheless, Tsuneo is confident this particular downturn is just a blip.

"I expect shipments of 5G smartphones to start growing from next fiscal year onward," he said when he announced the earnings. In a recent interview, he said the inventory adjustment is "likely to be a short one."

Tsuneo stresses it is still early days. "5G handsets have just hit the market and will make up only 15 million units out of the 1.3 billion-unit smartphone market in the current fiscal year," he said. But the company has already "seen stronger-than-expected demand" for MLCCs for 5G base stations.

The stock market is fired up. Murata's share price is up about 40% since August. "Investors want to own the [smartphone-related] stock ahead of a strong cycle that will help many of these parts suppliers, including companies like Murata," Garg said. 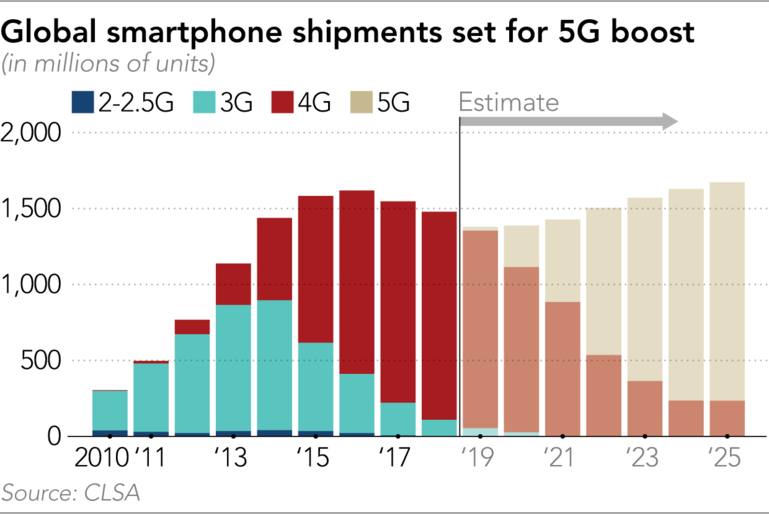 Then there is the trade war. This has opened new doors for Murata and other Japanese suppliers in China. Though it has hurt the global economy, Garg said, the conflict "is likely to change the competitive dynamics in favor of Japanese players."

Before Washington and Beijing squared off, Murata was losing market share in its other specialty -- smartphone radio frequency filters, which keep communications clear by removing unwanted signals. U.S. rivals such as Qualcomm and Skyworks were picking up more orders from Apple and Samsung Electronics as well as China's Huawei, Oppo and Vivo.

But then the U.S. government got in their way.

By clamping down on Chinese telecom equipment companies like ZTE and Huawei, restricting their access to American components, the Trump administration spurred them to take their business elsewhere.

"Japanese suppliers in general have occupied a sweet spot," CLSA's Garg said. "They don't have to side either with the U.S. or China. They can basically dual-supply both China and the U.S."

The greater China region now accounts for 56% of Murata's sales. Garg predicted that is "only going to increase." A Huawei 5G smartphone at an electronics show in Beijing: Analysts say Japanese parts makers like Murata occupy a "sweet spot" between China and the U.S.   © Reuters

China's rush to roll out 5G ahead of schedule is another fillip. Beijing handed out new spectrum licenses in June, three months earlier than planned, seeking a burst of telecom investment to rev up the economy. By 2025, China will have 600 million 5G subscribers or about 40% of the global total, according to an estimate from London-based GSMA reported in the Financial Times.

The head start in China should help tide Murata over until Japanese carriers launch their own 5G services, just ahead of the Tokyo Olympics next summer, and Apple releases 5G iPhones, likely next fall.

Even so, Tsuneo downplays the idea that the trade war is a positive.

"We do not expect we will benefit from the trade war in any significant way," he told the Nikkei Asian Review. He said he is more worried that the prolonged tensions will harm Chinese consumer sentiment, hinder capital investment and damage the overall Chinese economy.

The specter of that potential bust seems to weigh on the 68-year-old Tsuneo, a casual and unassuming man who says he never imagined running his father's business. His fears are fed by Akira's prophetic warning about the ups and downs of the tech cycle as well as his own memories of the company's recent history. 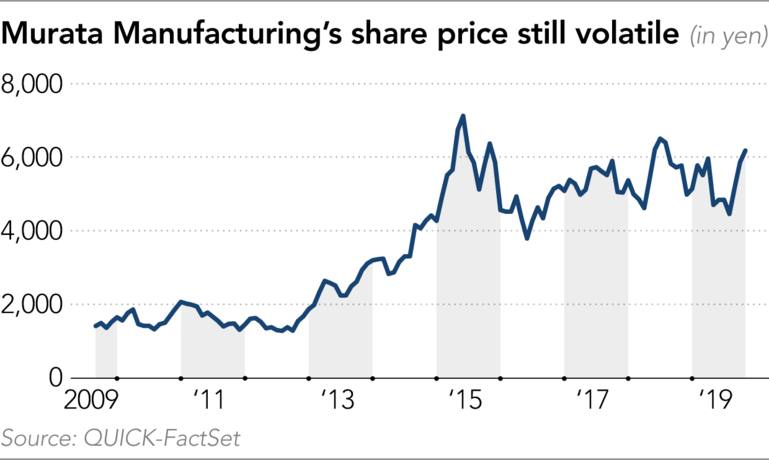 Akira did not have much formal education when he established the business in Kyoto, a city with a tradition of ceramic craftsmanship dating back centuries. What he did have was a role model: He had read a biography of Carl Zeiss, a German businessman who co-founded a global camera and lens manufacturer that still bears his name.

To support his mother, sister and two brothers, the young Akira set out to produce ceramic insulators. Like Zeiss, who had teamed up with a university professor named Ernst Abbe, the Japanese entrepreneur collaborated with researchers at Kyoto University.

As Japan began to rebuild after the war, consumers bought radios for news and entertainment. Radio production picked up and Murata cashed in.

The company ran into trouble in 1949, when the Allied Occupation forces introduced a fiscal austerity policy that plunged the country into a recession. But demand for capacitors surged again in 1953, thanks to black and white televisions.

In 1963, Murata went public, riding soaring demand for TVs ahead of the 1964 Tokyo Olympics. The boom died when the games ended, and Murata took a further blow from the effects of the 1973 oil crisis. But then came the explosion of color TVs in the 70s and a walkie-talkie boom in the U.S.

The roller coaster continues. After Tsuneo took the reins from his older brother Yasutaka in 2007 -- the same year Apple released the first iPhone -- Murata's sales skyrocketed, tripling to 1.58 trillion yen in a decade. This year, though, the global economic woes have taken a toll. "The market was in a bubble, and the U.S.-China trade war caused it to burst," Tsuneo said.

The downturn is hitting particularly hard in Izumo, a remote town in western Japan known for its ancient Shinto shrine. Murata is the biggest employer in the community, which is home to about 3,400 Brazilians of Japanese descent -- many of whom work in its factories. Now city officials say the company has cut their hours.

The cutbacks may be only temporary. But unless Murata takes advantage of the 5G momentum to find other growth avenues, Tsuneo worries it could find itself in the same predicament -- or worse -- in another 10 years. Analysts would also like to see the company find a firmer footing, free from the vagaries of smartphones and geopolitics. 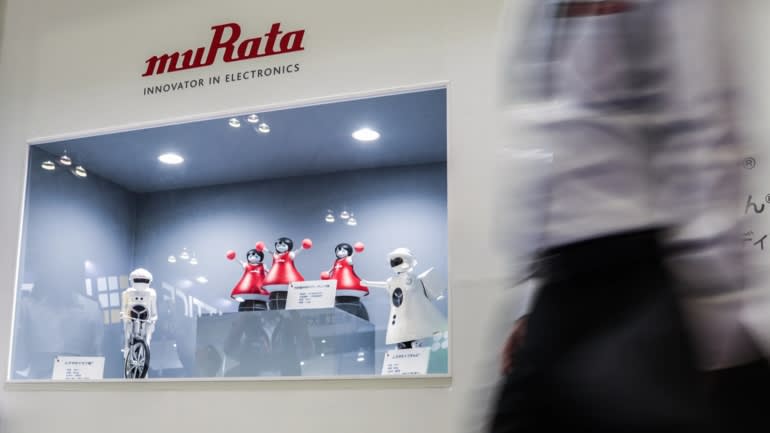 Murata displays concept robots that balance and synchronize their movements with communications technology, at an event near Tokyo in October. (Photo by Yuki Kohara)

Acquisitions might be one way forward. Murata, however, has always preferred organic growth -- a preference recent attempts at deal-making have done nothing to change.

In 2016, the company bought a Japanese component maker called Primatec, acquiring technology to create a rollable, bendable, twistable circuit board substrate for smartphone antenna modules. But the business remains unprofitable and, last fiscal year, Murata wrote down some of the production assets.

Then, in 2017, Murata acquired a lithium ion battery business from Sony. The rapid commoditization of batteries, however, threatens to dash hopes that this will ever become a revenue pillar.

Tsuneo sounds unenthusiastic about additional acquisitions. "It is time for us to focus on producing results from the acquisitions we've made in the past," he told Nikkei.

He has about a decade, maybe less, to figure it out.

Garg said each mobile cycle lasts about nine or 10 years, peaking in the middle. Tsuneo will have to be "a little bit more dynamic going forward," the analyst said, adding that Murata "needs to be prepared for the next cycle, which will come after 5G, so they are not again heavily exposed to the smartphone market."

Tsuneo thinks the answer could be partnerships, rather than buyouts.

"Takeovers are not the only way to acquire new technologies or business models," he said. "We are exploring other options, too."