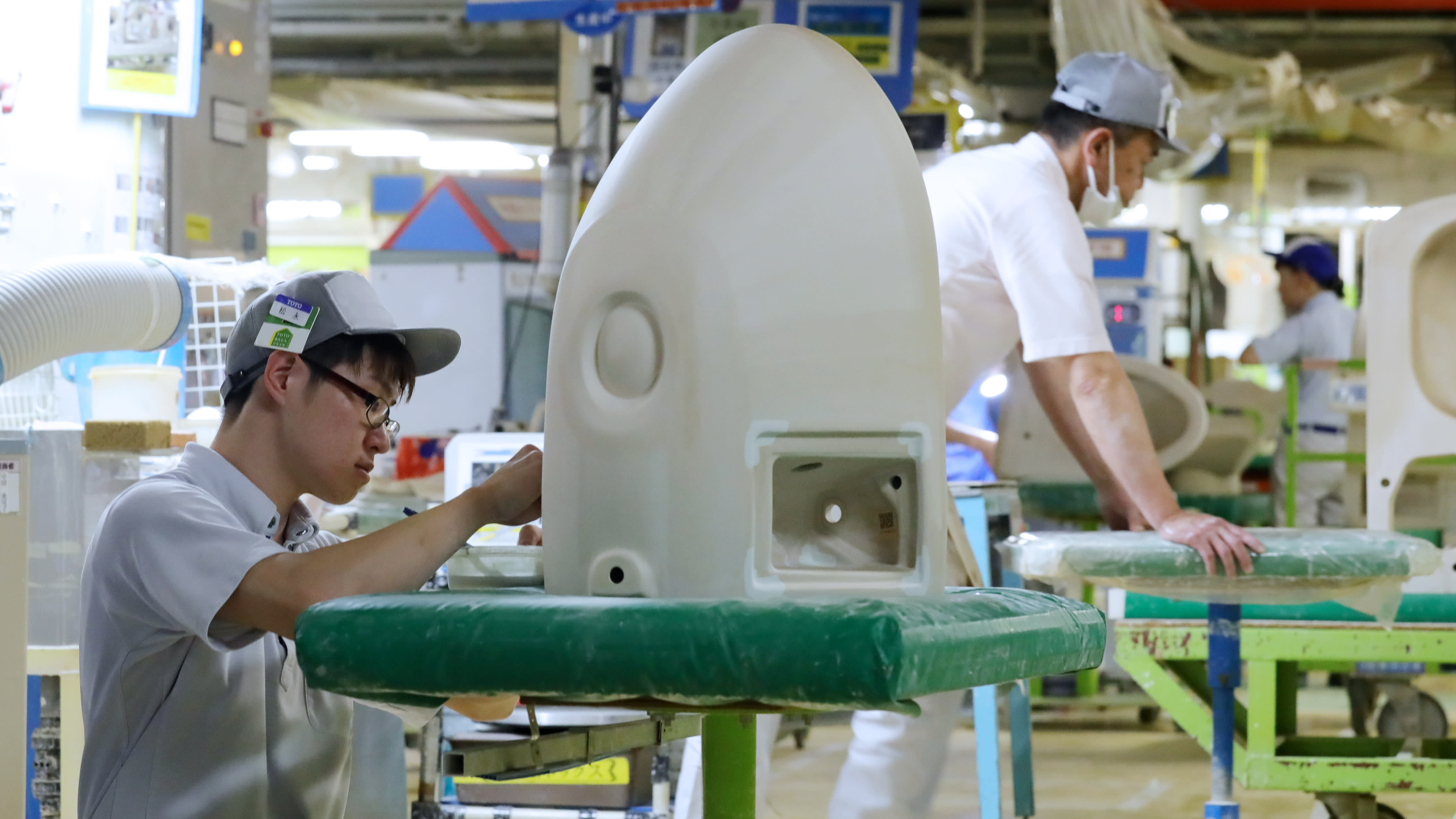 A worker polishes a toilet bowl at a Toto factory in Kitakyushu. (Photo by Ken Kobayashi)
Business Spotlight

KITAKYUSHU, Japan -- On the humid casting floor of Toto's sanitary ware factory in Kitakyushu, two workers in blue short-sleeved shirts and gray caps carefully use fingers and thumbs to smooth out the lines and bumps in a ceramic clay bowl that has emerged from its mold. An object that will soon turn into a sophisticated piece of electronic consumer hardware is starting to be formed in a traditional manner.

The Japanese electronic bidet toilet, an icon of water jet hygiene, warm seats, soft lighting and self-opening lids, is a fixture in the country that developed it but has taken a long time to catch on elsewhere.

"I hope this factory will produce even finer goods than Europe and send them flying around the world," Kazuchika Okura, Toto's first president, declared as he opened the company's first Kitakyushu factory in 1917. His ambition is paying off a century later.

Making high-end toilets, especially those that retail for up to $10,000 each in the U.S. when filled with electronics, is a craft affair. The bowls are molded, sprayed with two layers of glaze -- including a patented finish to stop staining -- and fired for 24 hours in a 115-meter long tunnel kiln at up to 1,165 C. Then comes an inspection, when each is struck with a small wooden mallet to check that it has no cracks and rings like a bell.

"Excellence in design and functionality requires a higher level of precision and it is still important to involve human hands," said Soichi Abe, the Toto director responsible for China, its largest export market, and the rest of Asia outside Japan.

Toto comfortably leads the domestic market for ceramic toilets but faces a tough fight overseas -- it estimates that there are between 200 and 300 Chinese makers of cheaper, lower quality spray seats and bidet toilets.

Coronavirus forced the closure of Toto's seven factories in China, and last month the company said supply chain difficulties there could disrupt production in Japan. But six of the seven factories have resumed production, and in the longer term, virus-related panic buying of toilet paper around the world may be good for bidet toilets. It draws attention to the appeal of using water for hygiene.

The concept of an electronic toilet often evokes amusement in the U.S. and Europe. But Japan's enthusiasm for all kinds of gadget-filled white goods, for which its consumers are willing to pay premium prices, reaches its most unusual expression in bathrooms. Toilet innovation comes naturally to a country devoted to cleanliness and bathing. Workers smooth out lines and bumps by hand on a ceramic clay bowl that has emerged from its mold. (Photo by Ken Kobayashi)

The difficulty for Toto and its nearest domestic competitor Inax, part of the building supplies group Lixil, is familiar to many Japanese groups. An aging and shrinking population limits the domestic market and forces Toto to put greater weight on its overseas business, which accounted for 22% of its sales in 2018, up from 8% in 2001. Sales in Japan were flat at 425 billion yen ($4 billion) in 2018, and operating profits fell to 24.4 billion yen from 28.6 billion yen in 2017.

This is not its only recent challenge. A slump in the building of luxury condominiums in China, its core market, led revenues there to fall in 2018 in the first year of an ambitious five-year plan to increase sales. "We do not focus on short-time impact but on the longer term," Abe said. "We look at China five or 10 years from now." He defines the top 10% of the income pyramid as its market in China.

The longer-term mission is to convince global consumers of the need for luxurious toilets and bathrooms, while making do without the brand and distribution advantages that Toto enjoys in Japan. Having launched the Washlet spray seat, which attaches to the top of standard toilets, in 1980, followed by its Neorest integrated bidet toilet in 1993, it has a leading position. But although the cumulative sales of Washlets have exceeded 50 million, they remain a curiosity in many countries.

Apart from China, Toto has Asian factories in India, Indonesia, Malaysia, Thailand and Vietnam. It sees Vietnam as a promising market, both for sales and manufacturing: It exports from there to Japan and the U.S. and is expanding its Vietnamese supply chain. India is a longer-term bet. "We expect that India will grow more and it will become one of the most interesting markets in 10 to 20 years," Abe said.

Both the ceramic and the bidet toilet were originally Western. Toto's first trademark was "Oriental Ceramic Works Ltd" (later translated to Toyo Toki, then shortened to Toto), and the company was founded after Okura visited Paris and was dazzled by ceramic sanitary ware. Toto made the Washlet following a period as the Japanese distributor of the Wash Air Seat, invented in 1963 by Arnold Cohen, a Brooklyn entrepreneur. Toto entered the U.S. in 1989, building its first factory there in 1991, and has a strong business. Its U.S. sales were $283 million in 2018, compared with 26 million euros ($29.2 million) in Europe, a market it entered in 2008. But efforts to persuade homeowners to buy bidet toilets, including a "Clean is Happy" campaign in 2007, have made limited progress. Americans remain the world's heaviest users of toilet paper, at 141 rolls each per year (Japanese average 91 rolls each).

"Toto is trying to expand in the U.S. market, but it is hard to sell the Washlet there," said Sachiko Okada, an equities analyst at Goldman Sachs in Japan. "Customers are very conservative." Okada cites the disruption of having to install an electrical connection to bidet toilets, and the relative lack of marketing to persuade homeowners to change habits, similar to Toto's advertising blitz when it launched the Washlet in Japan 40 years ago.

Abe detects some change in American attitudes. "When we started to sell the Washlet there, no one seemed to be interested," he said. "But we did not give up, and I think that our effort is finally bearing fruit." Abe says growth in China has helped: Business travelers using Toto toilets in luxury hotels in cities such as Shanghai are more likely to install them at home.

"If your hands are dirty, you do not clean them with dry paper," said Paul Flowers, chief design officer of Lixil, whose portfolio of brands includes Germany's Grohe and American Standard of the U.S. "Using a Western toilet can be quite uncomfortable, and people discover that when they experience the alternative."

Toto has also put greater emphasis on design for the international market, rather than just technology. This approach is exemplified by the Neorest NX, its priciest model, which sells for up to 604,000 yen in Japan and more internationally. "It is unusual for people to put machine-like things in bathrooms overseas, so we made the NX like an artwork," said Sachiko Niwano, senior engineer for Washlet development.

Manufacturing the Neorest NX has some challenges, since each unit shrinks by 13% in size between the clay being cast and being fired in the kiln. Internal spaces can change shape, making it impossible to fit all the electronic components in some units. Creating a ceramic toilet is inherently less predictable than stamping metal for cars or iPhones.

The Neorest NX is full of technology, including Toto's glaze to prevent dirt adhering to surfaces, components that electrolyze water to clean the bowl and pumps that inject bubbles of varying sizes into the bidet jet. It can baffle foreign customers who are used to advanced technology in washing machines and other household goods but not in toilets, and who expect to pay less. 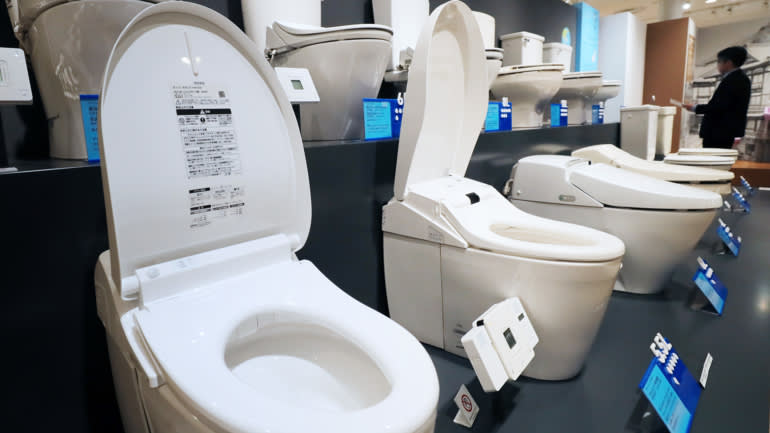 Neorest series toilets are showcased at the Toto Museum, next to the company's headquarters in Fukuoka Prefecture. (Photo by Ken Kobayashi)

Toto's flagship model is also much larger than many foreign toilets. "Consumers often say [Japanese toilets] are interesting but I do not want a huge monolith in my bathroom," said Lixil's Flowers. Lixil's Grohe brand has made its Sensia Arena bidet toilet for Europe smaller than the Neorest, marketing it as "German design and engineering meets Japanese spa culture."

Despite this, there are hopeful signs for Toto. It shifted toward home renovation in Japan after the market for new homes fell in the 1990s; remodeling of homes and public facilities accounted for 68% of domestic sales in 2018. There is a similar trend overseas, with families investing in home renovations and extensions and becoming willing to spend heavily on fixtures.

Bidet toilets may also benefit from ecological consciousness, with environmental groups such as the U.S. Natural Resources Defense Council protesting at the waste involved in paper's "tree-to-toilet pipeline." Some people's use of wet wipes rather than toilet paper is even worse for the environment and blocks sewage pipes.

But water is also precious, and Toto has to show that it is environmentally aware. It has reduced the water used per flush from 13 liters in 1975 to 3.8 liters in Neorest toilets, which since 2012 have employed a "tornado flush" to clean bowls. "To save even a small amount of water needs a lot of ingenuity," said Satoshi Yamakawa, sanitary ware research and development manager. "We have done what we can with today's technology."

In "In Praise of Shadows," Junichiro Tanizaki's 1933 essay on his country's aesthetics, the novelist wrote, "The parlor may have its charms, but the Japanese toilet is truly a place of spiritual repose." Tanizaki was referring to the traditional outhouse toilet rather than a Neorest NX in a luxury bathroom, but Japan still values the toilet highly. Toto's challenge remains to persuade the world beyond its borders.