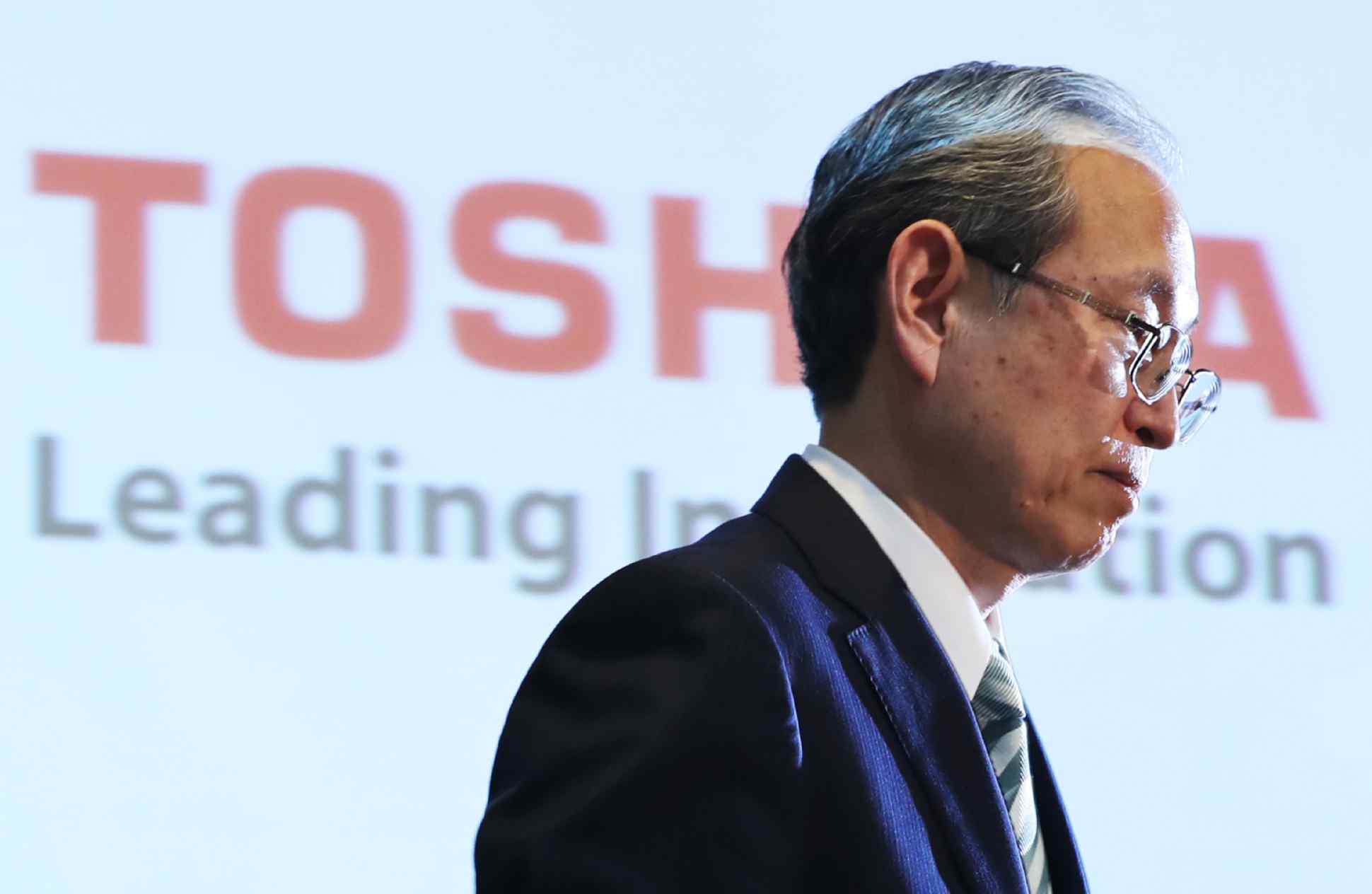 Toshiba president Satoshi Tsunakawa has come in for fierce criticism for the company's indecision over the sale of its memory chip unit. (Photo by Koji Uema)
Company in focus

TOKYO -- Toshiba belatedly submitted its annual report for the year ended March to the Kanto Local Finance Bureau on Aug. 10, after its auditor granted conditional approval to its books, which will allow the company to stay listed on the stock market.

The final results for fiscal 2016 came in little changed from an outlook the company released in late June. The company reported sales of 4.8 trillion yen ($43.66 billion), down 5.5% from the previous year and unchanged from the outlook. Operating income came in at 270 billion yen, also unchanged. By losing a net 965 billion yen for the year, Toshiba ended fiscal 2016 with a negative net worth of 552 billion yen.

Toshiba had been debating with its auditor, PricewaterhouseCoopers Aarata over when it had realized huge losses on its U.S. nuclear power unit Westinghouse Electric. The qualified approval by the auditor marks a step forward for the company in maintaining its Tokyo Stock Exchange listing. Toshiba shares carry a special warning from the TSE for inadequate internal controls, and a delisting would have been more likely had PwC Aarata rejected the fiscal 2016 report outright, or issued a disclaimer of opinion indicating it did not receive enough information or cooperation to approve or deny its veracity.

The industrial conglomerate will now turn its attention to the sale of its profitable memory unit, as it tries to recover from the losses at Westinghouse. But the divestment plan is becoming murkier.

One Toshiba executive who wished to remain anonymous was determined to select a buyer for the unit at a July 26 board meeting. But the board members only received a status report, and the topic was discussed for just 30 minutes.

They had been scheduled to compare the final proposals of two rival bidders: a consortium led by the public-private Innovation Network Corp. of Japan, or INCJ, which Toshiba had chosen for fast-track negotiations, and a group led by Toshiba's U.S. partner, Western Digital. But neither met the conditions Toshiba had set. Satoshi Tsunakawa, Toshiba's president, concluded that they could not make a decision that day.

Make up your mind

At a board meeting the previous month, Toshiba chose as its negotiating partner the INCJ consortium, which includes the state-backed Development Bank of Japan, U.S. private equity fund Bain Capital and South Korean chipmaker SK hynix. Tsunakawa said at a June 23 news conference that a final agreement on the buyout would be ready for a shareholder vote by the time of the company's annual meeting on June 28.

However, Toshiba restarted talks with the duo of Western Digital and U.S. investment fund Kohlberg Kravis Roberts, as well as with a third potential buyer, Taiwan's Hon Hai Precision Industry. Toshiba officials were split over who the buyer should be, highlighting the management's lack of foresight and indecision.

"Each executive says different things. Mr. Tsunakawa should exercise leadership," complained a person with the INCJ consortium. Western Digital CEO Steve Milligan visited Japan many times this year to urge Tsunakawa to make up his mind. 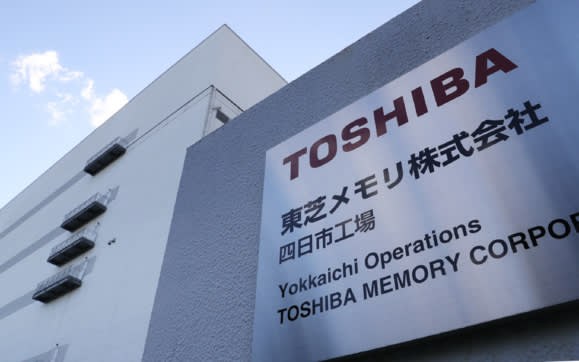 Western Digital was once known as a hard-disk drive specialist, but as the main memory storage medium switched to chips, the company bought U.S. flash memory maker SanDisk for $17.3 billion. SanDisk had a joint venture called Toshiba Memory with the Japanese company.

Milligan began to have doubts after the acquisition was completed in May 2016. He visited the joint venture's factory in Yokkaichi, in central Japan, and found that although Toshiba managed the complex and owned the land, SanDisk's chip-design technology was the pillar of the venture. He was said to have wondered whether a massive investment in Toshiba was worth it.

Western Digital's goodwill has quadrupled to 1 trillion yen ($9.9 billion) since the acquisition. Investors criticized the company for paying too much for SanDisk. When Toshiba's massive losses came to light late last year, Milligan immediately offered support to its troubled Japanese partner, but the two sides fell out over a renewal of the joint venture. Toshiba started looking for a buyer of its memory unit without informing Western Digital.

See you in court, maybe

Tsunakawa agreed to meet Milligan, but did not say much, deferring to Toshiba Memory President and CEO Yasuo Naruke. Naruke, however, refused to talk with Milligan, saying "he is an accountant who knows little about semiconductors." Milligan, unsure whom he should negotiate with, filed a request with the International Court of Arbitration in May to block the sale of the unit.

The only way for Toshiba to eliminate the risk of a court injunction is to reach a settlement with Western Digital, but a deal remains elusive. INCJ leads the so-called Japan-U.S.-South Korea consortium, but has also been invited to join Western Digital's team. This has led one INCJ executive to question why it should act as intermediary between the estranged partners.

The Japanese government's involvement in the buyout, which is aimed at preventing advanced semiconductor technology from leaking overseas, has made the situation worse. Since March, the Ministry of Economy, Trade and Industry mulled a plan to have several Japanese companies provide financial support to the memory unit, then tried to forge a Japan-U.S. alliance that would include Western Digital and INCJ, but to no avail. The INCJ consortium was hastily cobbled together in mid-June to create a Japan-led framework for Toshiba's rescue.

But things quickly began breaking down. In early July, the members of the consortium were negotiating a final contract. They were upset by a media report that SK Hynix, which had offered to take part through a loan to Bain Capital, that its investment would take the form of convertible bonds.

Bain had told INCJ and the Development Bank of Japan that SK would provide a loan without getting voting rights. After a long silence, Park Jung-ho, president and CEO of SK Telecom, who had taken charge of the negotiations for his company, told his partners the SK Telecom board would not approve the massive investment if SK never received voting rights. This led INCJ Chairman Toshiyuki Shiga to question whether Bain had deceived him.

The private equity fund also expressed surprise, saying it thought SK would not ask for convertible bonds. The miscommunication apparently arose because Bain had hired investment banks to act as its agent in its dealings with SK. The banks, hoping for fat fees from a successful deal, told Bain that its request would be accepted. One bank official said everyone was impatient to move ahead and interpreted the facts in their favor.

Rewind to June 19: Toshiba Memory's Naruke was in a rented meeting room in Tokyo with three senior trade ministry officials, who wanted to know how discussions on the sale of the memory unit were progressing.

The three oversee Japan's electronics industry and have handled difficult cases, such as the battle between Hon Hai and INCJ over the purchase of electronics maker Sharp, and providing additional financial help for Japan Display, a panel maker. Toshiba has been looking for assistance from the government since the spring. It does not entirely trust the government, but it has no one in Japan to help it draw up restructuring plans. Toshiba and the ministry signed a confidentiality agreement, allowing top ministry officials to monitor Toshiba's financial transactions.

Then, at a news conference following a shareholders meeting on June 22, Hon Hai Chairman Terry Gou lashed out at Japan's trade ministry, tearing up a local newspaper that had an article about his company's "defeat" in its bid for Toshiba's memory unit.

The ministry is also unhappy. "Every time [we] propose something, Toshiba says, 'We will do it by ourselves.' We know nothing about the company's decision-making process, let alone taking part in the process," one senior official lamented. Gone are the days when the ministry's predecessor, the mighty Ministry of International Trade and Industry, could determine the shape of industrial realignments.

Toshiba's lenders are in disarray, too. The outstanding loans of two banks from Mitsubishi UFJ Financial Group fell 40% in late June. The drop was far larger than the roughly 14% fall at Toshiba's two main lenders, Sumitomo Mitsui Financial Group and Mizuho Financial Group. Sumitomo Mitsui President Takeshi Kunibe has praised Toshiba as a very important company with excellent technology, and urged other lenders to continue supporting it. But not everyone is willing. Technically, the main banks could take over the loans extended by others, but interest-bearing debts of nearly 1 trillion yen are too heavy a load for a handful of banks to bear.

The Development Bank of Japan plans to provide nearly 300 billion yen. An executive admits the loan is not economically rational, but said it cannot be helped. It will be the largest loan the bank has extended since it was privatized in 2008.

Toshiba's annual report managed to gain approval from its auditor, albeit with reservations. The lenders, having been repeatedly disappointed by Toshiba, have agreed to keep the conglomerate alive but disagree over how it should be done. Toshiba shares will continue to trade for the time being, but the company will be delisted eventually, unless it deals with its excess liabilities by the end of March 2018. Selling the memory unit is the only way to do that. Time is running out for the struggling giant.