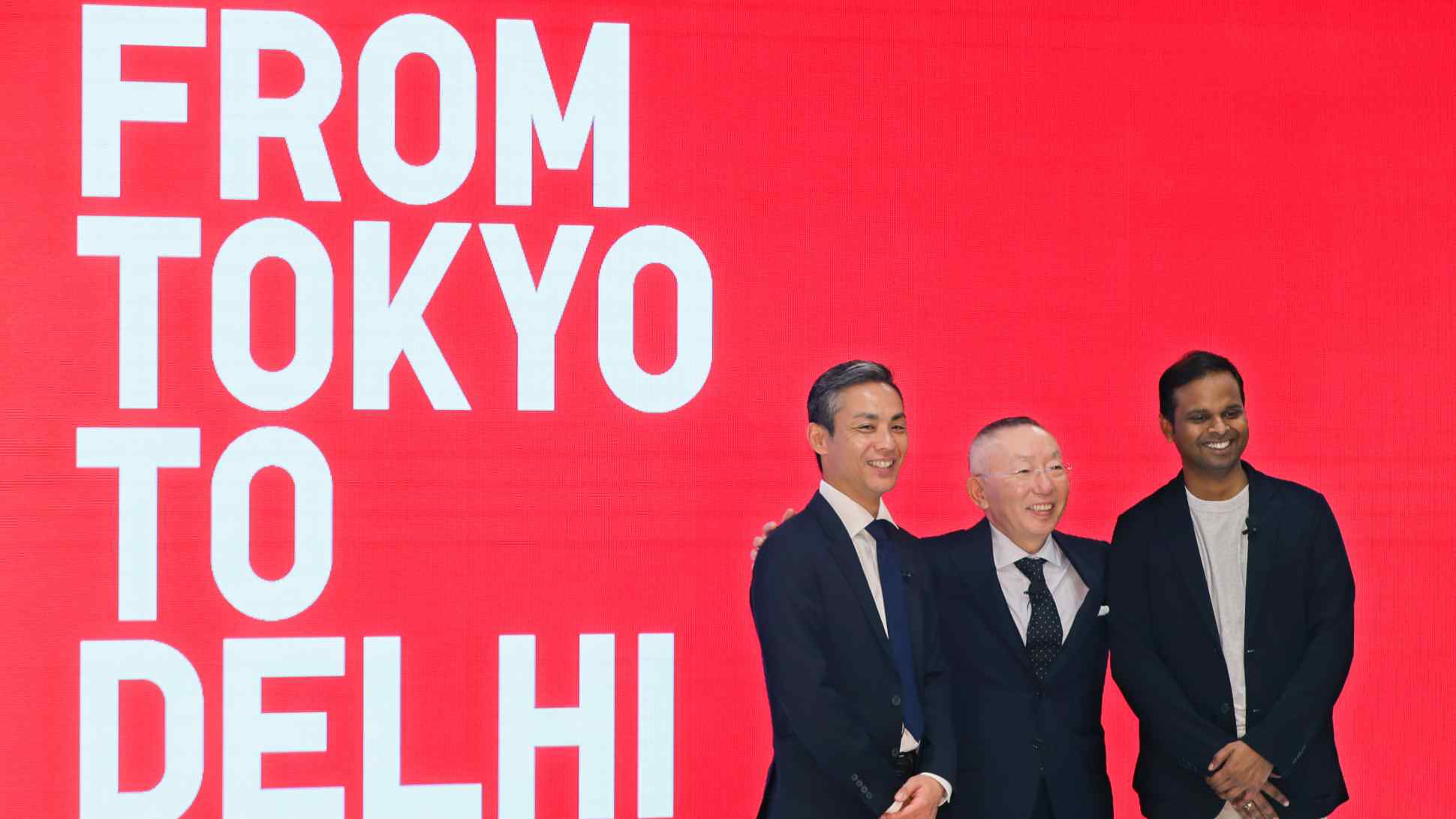 Uniqlo India CEO Tomohiko Sei, left, and Founder and Chairman Tadashi Yanai pose at a press event ahead of the opening of brand's first store in India. (Photo by Rie Ishii)
Company in focus

Uniqlo dreams big as it enters India, its 'new China'

NEW DELHI/TOKYO -- On the morning of Oct. 4, several hundred people waited patiently outside Uniqlo's sleek new 35,000-sq.-foot mega store in a popular New Delhi mall. When the doors opened, customers were greeted with a traditional Japanese drum ceremony and the first 500 got a free T-shirt and a 200 rupee ($2.80) discount on their first purchase if they downloaded the company's app.

T-shirts were a particularly hot item for the Japanese fast-fashion brand that day. Sehaj, a 20-year-old college student, bought eight. "I like the design and graphics," he said. Swedish retailer H&M offers similar shirts at better prices, he added, "but the quality at Uniqlo is better."

Uniqlo's owner, Fast Retailing, chose the perfect time to jump into the Indian market. Diwali, the biggest Hindu festival on the calendar, is just weeks away and Indians often splurge in the run-up to the holiday.

For Chairman Tadashi Yanai, Uniqlo's entry into the country of 1.3 billion is also the fulfillment of a decade-long quest to get into one of the world's fastest growing markets. "I have the same level of expectation for India's potential as a market as I've had for China, or even higher," Yanai had told a news conference the day before.

That is a high bar indeed. China is Uniqlo's biggest foreign market, and second only to Japan's. It has about 800 stores spread across the greater China region -- which includes Hong Kong and Taiwan -- and these made up more than half of overseas sales in the fiscal year ended August 2019. It is also growing fast: Uniqlo aims to open roughly 100 stores in the region every year.

Yet for all of Yanai's Indian ambitions, Uniqlo lags well behind its rivals there. H&M launched its India operations in 2015, and Spanish retailer Zara set up shop in 2010. The question, therefore, is: why did it take Yanai so long to get there?

For one, the Indian market is fraught with challenges.

"India is not a homogeneous country by way of customer preference," said Arvind Singhal, chairman of New Delhi-based retail consultancy Technopak, noting that consumers in different parts of the country have different tastes.

Furthermore, most Indians are in no hurry to modernize their clothing to Uniqlo's western fashion styles. According to a 2018 report from McKinsey and fashion-focused website Business of Fashion, "traditional wear will still account for a 65% market share by 2023."

Nor does retail space come cheap. High rent increases operating costs, yet at the same time brands need to price products cheaply to match consumers' low purchasing power. "Operating costs are high, but your retail price is low," said Singhal. "That makes it a big challenge." 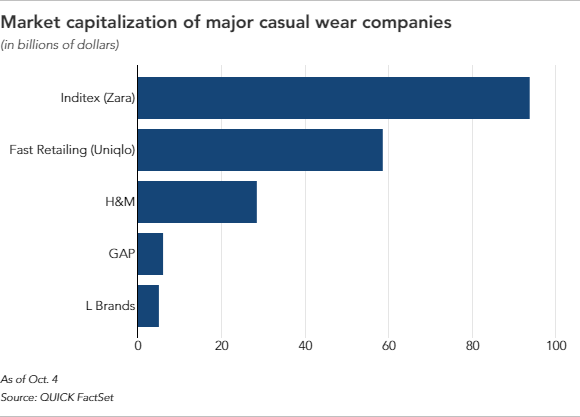 Perhaps the biggest challenge for Uniqlo, though, was figuring out how to enter the Indian market and negotiate its fearsome regulatory thicket. In this particular case, the rule that bit was a requirement that any foreign company with more than 51% ownership must source local raw materials worth at least 30% of the value of the goods sold in the country.

Such rules left Uniqlo with a choice. Either it could enter as an independent majority-owned subsidiary and source domestic suppliers to meet the local content requirements, or it could tie up with an Indian partner and be free of that restraint. Each choice had its pluses and minuses. As it happens, each path had also been tried by Uniqlo's two biggest global competitors.

Spanish fast-fashion brand Zara, which owns 51% of a joint venture with India's Tata Group, had chosen the second route, while Sweden's H&M had set up its own local unit and gone down the first. Customers line up at the opening of Uniqlo's first Indian store in New Delhi on Oct. 4. (Photo by Rie Ishii)

It turns out having a local partner can slow things down. Zara, which began operations in 2010 with Tata as its local partner, today has the greater sales. But it is also growing more slowly. Its India business recorded revenue of 14.38 billion rupees in the financial year ended in March, up about 18% from the previous year -- which is a rapid clip of growth

But H&M, which opened five years later in 2015, is gaining ground fast. "Having a partner actually slows you down in terms of what you want to do because both partners have to be aligned," said Technopak's Singhal.

H&M's sales crossed the 10 billion rupee mark last year, a 29% increase from 2017. If these rates of growth remain constant, H&M's sales will overtake Zara's by 2023. Moreover, it is investing hand over fist to try and achieve that. Zara operates 22 stores across the country, compared to H&M with 42, but the Swedish retailer plans to have 50 Indian stores by 2020, a 7 billion rupee commitment. 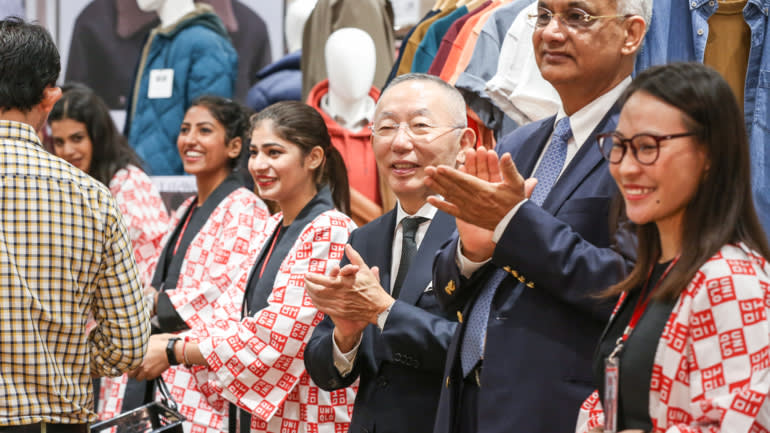 In the end, Fast Retailing went down the H&M route, when it applied in 2017 to run the Uniqlo brand through a wholly owned subsidiary.

"We'll hire good Indian talent and have them run the India business," Chairman Yanai said. "I believe that's the best way for our company to learn about India."

In a stroke of luck, in August this year the local content rule was changed in an effort to boost Indian economic growth. Uniqlo will still have to source from Indian suppliers. but whereas before domestically procured supplies had to be sold internally, now they can be sold in India or abroad. The net result is a relaxation of the domestic sourcing constraint.

Ikea, the Swedish furniture retailer, is among the first companies that can take advantage of the regulatory change. It had been sourcing textiles from India for more than three decades for its overseas operations. The new rules will help it expand in India.

Either way, Uniqlo is committed to manufacturing in India. It has already started working with several local partners and will likely have little difficulty meeting the thresholds.

"Regardless of the 30% requirement, we'll expand production in India," Tomohiko Sei, chief executive of the Indian subsidiary, told reporters. "Our goal is to produce our clothes together with Indian companies and people." Given the size of the Indian market, and its expanding middle classes, India will be a fierce battleground for international fashion brands -- be they Uniqlo, H&M, Zara or more exclusive brands.

According to the McKinsey report, India will become the world's sixth-largest apparel market by 2022. Its apparel industry is already worth over 6.5 trillion rupees, more than double what it was worth in 2010, according to an April report by Care Ratings. Hundreds of fashion brands are racing to open shops. Tiffany & Co, Chinese brand Yoyoso, and Saint Laurent are already planning store locations, according to local reports.

Even Los Angeles-based Forever 21, which recently filed for bankruptcy in the U.S., is staying put in India. "Forever 21's India business is run as a franchise operation by Aditya Birla Fashion and Retail Limited," Alecia Pulman, a spokesperson for Forever 21, told Nikkei Asian Review in emailed comments. "The business operations of the brand in India will not be impacted in anyway by its restructuring underway in the U.S."

For Uniqlo, that means competition in India will be stiff, however alluring the market's prospects. "Just being a Japanese brand with high quality products doesn't add value," said Ryosuke Kurita, a consultant at Deloitte Touche Tohmatsu India. It is an important difference from China and Southeast Asia, where the good reputation of all Japanese brands has given Uniqlo a leg-up.

Still, the eager shoppers that crowded into Uniqlo's new flagship store in New Delhi were an auspicious start for Yanai's dream that India would be Fast Retailing's "new China."

"I had heard a lot about Uniqlo,"said Alisha Kapoor, a 30-year-old private sector worker. "I came to see their products firsthand."