Fast Retailing founder and CEO Tadashi Yanai in Tokyo earlier this month. His ambition is to "expand to all parts of the world." (Photo by Ken Kobayashi)
Company in focus

Fast Retailing founder looks to the future of fashion

TOKYO -- Uniqlo's cavernous warehouse in Tokyo's Ariake district, a vast space populated by conveyor belts pushing around boxes and towering shelves stacked with containers, is all but devoid of human life.

Almost everything is automated in the three-story building used by the popular Japanese fashion brand to distribute its products, apart from the solitary workers standing in front of each conveyor belt packing items into the boxes that will be shipped to its online customers.

This is the vision of the future as designed by Uniqlo's parent, Fast Retailing: a world where everything from manufacturing to store operations is seamlessly connected by technology, with minimum human intervention.

Fast Retailing founder and CEO Tadashi Yanai knows that this is the only way to keep his global clothing empire growing and -- even more urgently -- to survive competition from U.S. e-commerce titan Amazon.

"We are a digital consumer retail company," Yanai declared at a news conference at the Ariake warehouse earlier this month. His recent focus on technology represents a new stage for Uniqlo's transformation, which he has said is "necessary in order to survive in a fast changing society."

Ariake, located by the port region of Tokyo Bay, is an important pillar of Yanai's ambitions, comprising automation projects while working to strengthen partnerships with other companies. It became the new corporate hub last year, gathering employees from different departments, including product development and marketing, all under one roof.

Digitalization, and the efficiency that comes with it, should also help the company to counter increasing labor costs and management challenges. In Japan, a serious shortage of labor makes it difficult to fill positions. In China, meanwhile, a major location for Fast Retailing's partnering factories, wages are rising.

The digitalization strategy is a sea change for Fast Retailing, which has its origins in the men's clothing store run by Yanai's father in western Japan's Yamaguchi Prefecture, where the company's headquarters is still located.

Yanai, who joined the family business in 1972 after briefly working at supermarket chain Japan United Stores Company (now Aeon Group), was influenced by Western casual-clothing chains after visiting the U.K. and the U.S. while a student. This inspiration led to the opening of the first Uniqlo store, which was then called Unique Clothing Warehouse and sold casualwear, in 1984 in Hiroshima.

The company changed its name to Fast Retailing in 1991 and has expanded into a global chain under Yanai's leadership, after its fleece products became a hit in Japan in the late 1990s. The transformation was not without problems. It opened its first overseas store in London in 2001 and expanded rapidly, but it had to close 16 of its 21 U.K. outlets two years later because of operational difficulties. Yet Fast Retailing used the lessons to expand into other countries, and by the end of August 2018 annual revenue had ballooned to 2.13 trillion yen ($18.96 billion).

Yanai, 69 years old, is the largest shareholder, with a 21.67% stake, while his two sons and wife hold a combined 11.21%. His sons currently are senior vice presidents and will be promoted to directors in November.

In an interview with Nikkei in 1994, Yanai said that the name change was inspired by the character of fast-food outlets. "The store operating systems in the U.S. -- The Limited [now L Brands] and Gap -- are the same as fast food," he said at the time, with their "selling lines, customers of all ages and sexes, simple stores, fast service, original products and reasonable pricing."

Uniqlo now embraces that model, branding itself as a provider of "LifeWear" -- clothes for everyday use. Now there is a new inspiration -- and target. "What Yanai has in mind now is Zara," said Takahiro Saito, CEO of fashion retail consulting firm Demand Works and author of the book "Uniqlo vs. Zara."

Inditex, which had revenue of 25.3 billion euros ($29.1 billion) last year, has been investing in logistics and new technologies, giving it a crucial edge on competitors. When it listed on the Madrid Stock Exchange in 2001, "the primary objective was to invest in logistics that would be essential for global expansion," Saito said.

Inditex focuses on fast and flexible delivery that sends only what each store needs -- a natural investment given that its focus is on the latest catwalk trends, as well as its relatively higher prices compared with basic casualwear retailers like Uniqlo. Inditex was also swift in introducing radio-frequency identification tags that helps with factory automation, inventory management and digitalization of stores.

In contrast, Fast Retailing's priority previously was cutting costs, Saito noted. Until a few years ago, there were limited options in shipping specific clothing items to its shops, he said. That meant even unpopular items were sent to certain stores, while others often lacked stocks of strong-selling articles.

Fast Retailing's global allocation of inventories at Ariake have contributed to an improvement. Yet, while it may be catching up with its Spanish rival, the real competition is now likely to be elsewhere.

Online sales and tech companies, namely Amazon and online startups, are the ones posing challenges to traditional retailers. In Japan, online fashion mall Zozotown's private label is seen as a Uniqlo rival, with both offering basic clothing.

Speaking at Ariake earlier this month, Yanai acknowledged that Fast Retailing's weakness was online. There was also a new race under way in the use of information and efficiency of operations, he admitted.

"Customer information will be equivalent to product information in the future," he said. The ability to analyze and understand data, and to use artificial intelligence and the industrial internet to serve customers better would be crucial to success, he added.

A retail consultant close to the Ariake warehouse project noted: "Amazon is essentially what the project is aiming for." The goal is to replace repetitive jobs and calculations with machines and software to expand the capacity for handling information.

Yanai argues that Fast Retailing needs to "be creating products based on the best information for customers." Yanai's vision, as suggested by the consultant, is strikingly similar to the Amazon model, where information on browsing and shopping habits is used to recommend products that match shoppers' personal tastes.

But, says Yanai, neither Amazon nor Zozotown have Fast Retailing's expertise in private labels.

"I do not think Amazon and Zozotown are going to take all the apparel market," he said. "We have rich resources and knowledge in clothing. We are creating truly good products," distinguishing the company from online retailers, he added. 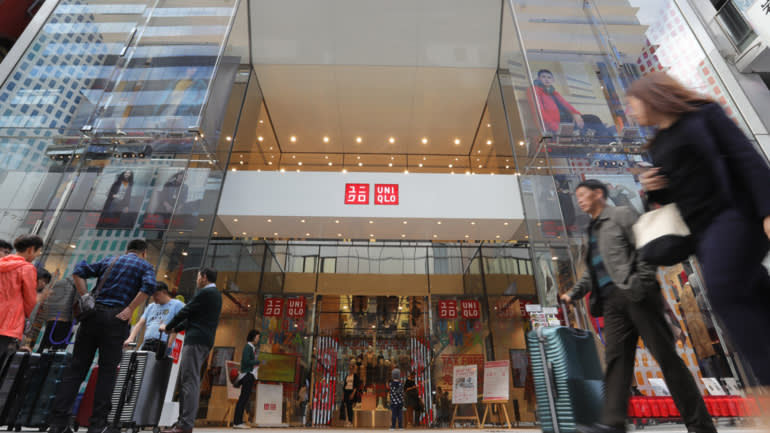 Yet online retailers are closing the gap. Amazon is selling clothing through its private label Amazon Essentials, as well as experimenting with its more creative lines of clothes. It even reportedly received a patent for on-demand apparel manufacturing last year.

Fast Retailing also has to step up its logistical game if it is to fend off these fast-moving competitors. Over the past few years, it has suffered a series of setbacks with its infrastructure, ranging from troubles associated with outsourced systems to having to halt temporarily its next-day delivery services in Japan for online orders.

In addition, it needs to be aware of the potential for reputational damage from its growing supply chain. This month, former employees of Jaba Garmindo, an Indonesian company that previously made clothes for Uniqlo but went bankrupt in 2015, visited Tokyo to demand unpaid wages and severance from Fast Retailing. The company has said the legal responsibility for the situation remains with Jaba Garmindo, but it is "leading discussion with the relevant parties to facilitate re-employment" for the unemployed workers.

Back at Ariake, the project to improve the efficiency of operations began last year and appears to be delivering early results. Fast Retailing's quarterly earnings this year exceeded targets, and operations both at home and abroad showed increased sales and profit. Group operating profit was 236 billion yen, up 33.9% on the previous year. 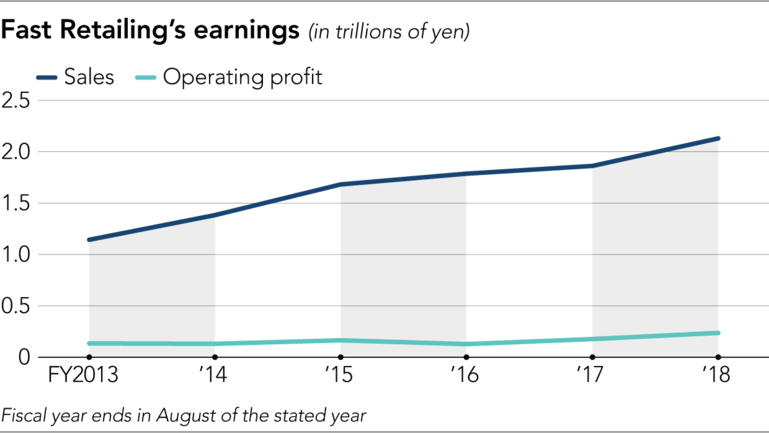 Takahiro Kazahaya, senior analyst at Deutsche Securities, said the improvement could be seen as a positive result from Fast Retailing's tech initiatives and the better communication across the company globally. Fast Retailing's inventory management had also benefited from better forecasts of consumer demand as a result of analyzing internet sales, he said. Still,the project was "too broad and it is not easy to determine its impact," he added.

The warehouse at Ariake, which began testing automation last spring, currently handles Uniqlo products for domestic e-commerce. Automation has improved warehousing productivity by 80 times, requiring 90% fewer human workers, according to the company. There are about 10 workers at the warehouse now, but within a year it will be fully automated, requiring even fewer.

Ariake will be the standard for the company globally. Fast Retailing plans to invest about 100 billion yen to automate warehouses in the rest of the world within three years. Partnering with Japanese material-handling equipment maker Daifuku, Fast Retailing has already assigned project teams in China, Thailand, Australia and the U.S. The company has nearly 3,450 stores in about 20 countries in Asia, Europe, North America and Australia.

But the Ariake project is far from complete. So far it has focused mainly on serving Uniqlo, and Fast Retailing is only now starting to expand the strategy to its sister brand GU, which sells trendier items for lower prices.

Yanai's ambition is to "expand to all parts of the world," and he has set a target to double Uniqlo's revenue to 3 trillion yen by 2022. To do that, he knows that Fast Retailing will have to live up to its name. More importantly, and in his own words, he understands that Ariake and the strategy behind it will be a "never-ending project."