SINGAPORE --  The abrupt resignation of Singapore Post chief executive Wolfgang Baier on Dec. 10 got the city-state buzzing. Baier was seen as the driving force behind SingPost's expansion into e-commerce amid a decline in global mail volume. The shock was felt in the market the next day, when SingPost shares dropped more than 2% to close at 1.71 Singapore dollars. The decline continued for several days, with the stock finishing at S$1.66 on Dec. 18.

When Baier took the helm in October 2011, SingPost was trading at around S$1.03. He oversaw a climb to a record high of S$2.15 on Jan. 28 of this year, the same day the Monetary Authority of Singapore announced a surprise adjustment to its monetary policy.

Even so, few expected Baier would leave. "We were not privy to information [that Baier will resign]," Standard & Poor's analyst Annabelle Teo said. "It was a surprise for us."

Another industry source said he saw Baier at an event just two weeks earlier. "It was a surprise for me, too," the source said. "I didn't hear any rumors beforehand."

The reasons for Baier's resignation remain a mystery. But rumors circulating in the local media suggest he was in conflict with Lim Ho Kee, SingPost's chairman and independent director.

Baier's departure came as SingPost was crossing a milestone in its global expansion push. In November, the company announced it was acquiring two U.S. companies, TradeGlobal and Jagged Peak, for $184.4 million. This is SingPost's first foray into the e-commerce logistics business in North America; it hopes the purchases will help it reel in global brands seeking online sales in Southeast Asia.

For SingPost, the $168.6 million TradeGlobal deal was an unusually big splash. Rather than buying out large logistics companies to capture market share immediately -- as peers such as Deutsche Post and Japan Post have done -- SingPost started its e-commerce drive with a number of small to midsize investments. It bought into warehouses, freight forwarders and parcel pickup services.

The company has taken on a broad role in e-commerce, handling everything from digital marketing and website creation to warehouse management, fulfillment and delivery through partner companies. Aiming to become a regional force in the field, SingPost is developing a $131 million logistics center in Singapore to consolidate inventories from around the globe and ship them to various corners of Asia. Baier, who previously worked for McKinsey & Co., recruited e-commerce and information technology experts from the likes of Amazon.com and IBM. "We need to act like an e-commerce player to know what they really want," Baier said in a past interview with the Nikkei Asian Review. "We work like a startup," he said on another occasion.

Baier's e-commerce strategy had a positive effect on results: SingPost's annual revenue swelled around 60% and net profit expanded some 10% during Baier's tenure as CEO. The company posted revenue of S$919.6 million in the financial year ended in March, while net profit attributable to equity holders was S$157.6 million.

Now SingPost has to push ahead with its e-commerce strategy -- and integrate the companies it has acquired -- without the chief executive who spearheaded it all.

Asked about Baier's resignation, a SingPost representative said it "will not affect Singapore Post's transformation plan to strengthen its position as a regional and global e-commerce logistics player." The company, the representative added, "will continue to focus on integrating its recent acquisitions and investments."

Some, however, wonder whether the existing team has what it takes to lead SingPost through its transformation. Mak Yuen Teen, an associate professor at National University of Singapore Business School and a SingPost shareholder, expressed his concerns in a commentary published in a local newspaper. "One must question whether Mr. Goh has the necessary knowledge about the business, experience and time to undertake what sounds like a rather onerous task -- especially working alongside an acting group CEO who is also new," he wrote. Mak added that Lim's additional involvement in SingPost's operations would raise questions about his role as an independent director.

Toru Yoshikawa, a professor at Singapore Management University, echoes Mak's worries. "Lim's tenure since 1998 is too long to be considered independent by normal standards," Yoshikawa said. The monetary authority's code of corporate governance states that an independent director who has served on the board beyond nine years "should be subject to particularly rigorous review." He added, "With such long-serving board members, the CEO may feel that the board has more power than it should, leaving him with little say in business execution." 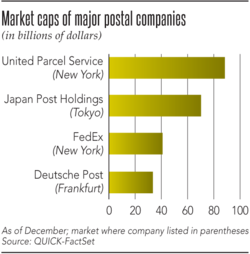 In a statement responding to Mak's commentary, SingPost said the company was "on the right track" in accelerating its transformation into a force in e-commerce. The statement noted that SingPost's numerous acquisitions over a short period place "a huge demand" on the executive committee, and that its long-serving board members "bring invaluable legacy" to SingPost.

Sizing up the competition

In the meantime, competition in the region's e-commerce logistics business is heating up. Large international players, such as Germany's DHL -- owned by Deutsche Post -- are stepping up investments in Singapore. Japan Post earlier this year acquired Australian logistics group Toll Holdings for 6.49 billion Australian dollars (about $5.07 billion at the time), eyeing growing demand for cross-border, e-commerce-related logistics. SingPost is not the only Southeast Asian postal company branching out. Pos Indonesia recently announced a partnership with the local unit of online fashion retailer Zalora Indonesia, through which it will provide return services at post offices. The state-owned Indonesian postal service also joined hands with Mataharimall.com, the domestic conglomerate Lippo Group's online mall operator, to install parcel pickup lockers in Greater Jakarta.

S&P's Bertrand Jabouley said that while it is too early to gauge the impact of SingPost's investments in new areas, its strategy of building up its e-commerce operations makes sense. "You cannot rely forever on a shrinking business," he said. But he also noted the risks that come with acquisitions and investments. The rating agency put SingPost on its CreditWatch negative list in early November, soon after the company announced a $100 million investment to develop a new shopping mall in the city-state.

The investment was deemed excessive. The company's "growth strategy could affect its business profile and financial strength," said S&P in a press release. With the addition of new mall development, S&P said SingPost's capital outlays "could significantly exceed our previous estimates." Although SingPost's net profit margin of 17% is much higher than many of its peers -- Japan Post's is 3% -- the absolute net profit amount is much smaller than its larger competitors. SingPost's net profit was about S$157 million in the financial year ended in March.

"The sudden resignation of Baier only adds to our concern," Jabouley said. He cautioned that SingPost might have a hard time finding a new CEO, especially given the nagging questions about corporate governance.

Nevertheless, Jabouley expects SingPost to continue getting strong support from its major shareholders. He called a withdrawal of capital by Alibaba "unlikely."