Xiaomi founder and Chief Executive Lei Jun describes the technology company as a "new species" not comparable to others. (Photo by Koko Chung)
Company in focus

Xiaomi is in a class of its own, founder claims

HONG KONG -- Xiaomi knows how to keep the cost of its smartphones low.

But the Chinese technology company has high hopes for its share price as it prepares for its listing on the Hong Kong stock exchange on Monday. Branding itself as an internet company that makes hardware and offers retail outlets, the eight-year-old start-up has left Chinese securities regulators bewildered about its business model.

Just a week before Xiaomi unveiled its $4.7 billion initial public offering, the China Securities Regulatory Commission submitted 84 questions to the company requesting a clearer explanation for why it called itself an "internet company" when most of its revenue came from hardware sales. Rather than responding to the regulators within 30 days as requested, Xiaomi canceled its planned sale of Chinese depositary receipts and opted instead for just a Hong Kong listing.

Beijing-based Xiaomi set its final share price at 17 Hong Kong dollars (about $2.20), the lower end of its proposed price range. That values Xiaomi at $54 billion, about half of what has been previously expected. But the setback in winning over hard-nosed investors did not stop Lei Jun, Xiaomi's billionaire founder, from divulging grand ambitions for his tech company, which he describes as a "new species" not comparable to others.

"It does not matter what [companies like Xiaomi] are being called," Lei said at a press conference in Hong Kong on June 23. "But people should understand the great competitiveness these kinds of companies have." 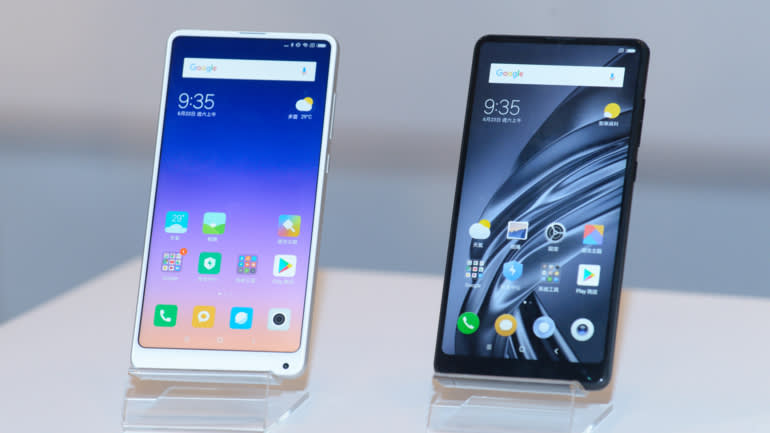 In the first quarter of 2018, Xiaomi ranked as the world's fourth-largest smartphone maker after Apple, Samsung Electronics and Huawei in terms of shipments.

Founded in 2010, Xiaomi quickly took China by storm with its inexpensive but high-quality handsets. It was ranked as the world's fourth-largest smartphone maker after Apple, Samsung Electronics and Huawei in terms of shipments in the first quarter of 2018. Xiaomi also manufactures and sells electrical goods and lifestyle products, from rice cookers and air purifiers to sunglasses and backpacks, through the internet. It also earns revenue from services and advertisements on its mobile and internet platforms.

Smartphone sales still accounted for 70.3% of Xiaomi's revenue in 2017, while internet services contributed 8.6%. But Xiaomi has said it will not build its fortune on hardware sales, saying it would put an indefinite cap of 5% on net profit margin on those items -- though very few hardware makers have a profit margin exceeding that. Instead, Lei, dubbed China’s Steve Jobs by Chinese news media and within the country’s tech industry, has pinned his hopes on Xiaomi's internet services, an important pillar in what the company describes as its "triathlon" business model. He is counting on users to eventually pay for such online services as music, financial services and video streaming using the company's own Android-based operating system, MIUI. The company's internet business has been highly profitable, with a gross margin of 60.2% compared with 8.8% for smartphones.

In March, MIUI had 190 million monthly active users, who spent an average of 4.5 hours a day on their smartphones. But the company's monetization rate is below that of other internet players. Xiaomi generated $9 annually from each of its online users, compared with $34.50 for Tencent Holdings and $20.20 for Facebook, although that figure has been increasing.

But there is concern among some analysts that Xiaomi's internet-driven profitability model may falter as it aggressively expands into less-developed countries outside China.

"People in emerging countries are not only sensitive to hardware prices, but also those for content and media," said Jusy Hong, research and analysis director for smartphones at IHS Markit in South Korea. He said studies show that people in emerging markets are less willing to pay for online services due to low data consumption levels and poor internet connections. Instead, they prefer gaming, which they can play without consuming much data.

A lack of localized content and concerns over data security are other hurdles Xiaomi faces as it seeks to replicate its success in China in overseas markets. In India, where Xiaomi has overtaken Samsung as the country's largest seller of smartphones with a market share of 31.1% as of the end of March, it has been slow in introducing online services, including Mi Credit, a lending platform and Mi Music, a streaming service.

Ammo Angom, a 34-year-old entrepreneur from Mumbai, likes the Redmi phone model he has been using for the past two years, but the issue of data security worries him. "I am not comfortable using the phone for anything sensitive like e-banking because of increased bloatware activities," he said in explaining why he does not use Mi Credit.

"Xiaomi is quite new in India," said Tarun Pathak, analyst at CounterPoint Research. "Many users are using it for the first time, so it will have to first build trust in the brand for buyers to start using services," Pathak said, adding that a greater challenge will be in persuading Indians to pay for services that they can now get free elsewhere. "It will take some time."

Xiaomi's products are used in more than 70 countries and regions, mostly developing economies. Since last year, Xiaomi has expanded into more developed European markets, setting up Mi stores -- which resemble Apple stores -- in Spain, France and Italy. It also sells smartphones through local vendors in other countries.

In affluent markets, however, Xiaomi is struggling to raise its brand recognition as it competes with Chinese rivals that entered the market earlier. At Worten, a Portuguese electronics shop located in one of the Lisbon's most popular shopping malls, a display stand exhibits many smartphone models from Huawei, but only a few from Xiaomi.

"[Xiaomi] is not such a well-known brand. You don't see it on TV ads. But people are asking for it," said Joao Homem Bom, a Worten shop assistant. But he added that Huawei is winning more customers as "the price-quality ratio of the products are quite good."

Shenzhen-based Huawei's market share in Europe stood at 16.1% in the first quarter of this year, less than Samsung and Apple, while Xiaomi's market share was 5.3%, according to technology market analyst firm Canalys.

Positive word of mouth is beginning to help boost Xiaomi phone sales. Daniela Igreja, a Portuguese real estate consultant, is on her second Xiaomi phone, having ordered both online from China after a friend suggested she try the brand. "It's a great tool, and very cheap," she said. All her family members have become "converts," except her husband who still prefers Apple's iPhone.

"While Huawei invests heavily in points of sales, Xiaomi is able to increase sales without the same levels of investment," said Francisco Jeronimo, senior research analyst at IDC. For price-sensitive markets such as Greece, where consumers look for medium-priced handsets, brand recognition is less relevant, he said.

Xiaomi is seeing a rise in its share of the global smartphone market, which grew to 8.4% in the first quarter this year from 4.3% in the same period in 2017, while shipment volume jumped 87.8% to 27.8 million units. Last year, it was China's most popular smartphone producer as measured by market share after sales declined in the previous two years. 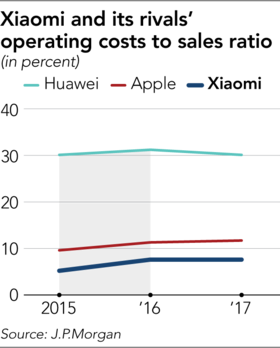 Questions remain over Xiaomi's profitability. Xiaomi's hardware -- including smartphones, internet-connected devices and lifestyle products -- had a gross margin of 8.7% in 2017, and the figure fell to 7% in the first three months of this year.

With those questions hanging over Xiaomi's business model, some analysts point to a bumpy journey to the stock market.

"The [IPO] price is still very expensive," said William Xie, an investment analyst at Brightway Asset Management, who attended Xiaomi's investor roadshow in Hong Kong last month. Despite Lei's effort to woo an audience of 300 investors during the one-hour presentation, Xie said Xiaomi still looks like a hardware company and its current strategy does not justify its price.

Xiaomi's underwriters -- including Goldman Sachs, Morgan Stanley and CLSA -- apparently used the formula for an internet company to calculate Xiaomi's valuation. It gave the company an estimated price-earnings ratio -- used to measure growth potential -- of 22.7 times 2019 earnings based on its IPO price. While that multiple is higher than Apple's, Chinese internet conglomerate Tencent has an estimated P/E ratio of 28.9 times 2019 earnings. In response to skeptics, Lei said Xiaomi should be valued by "multiplying Apple by Tencent" and its innovative business model was meant to be "beyond cognition." He added: "If people can understand it easily, we can't call it innovation."

But Xie believes Xiaomi's business model is not mysterious. He compared Xiaomi to Swedish fast-fashion brand H&M, which manufactures large volumes of affordable clothes that look identical to high-end brands. Xiaomi also has an ability to quickly launch a wide range of hardware products at a low cost. That model saves Xiaomi a great deal of investment on research and design, which acquires revenue based on scale.

In addition, Lei also has spotted another opportunity to make money by investing in other startups. Unlike most Chinese entrepreneurs, Lei was already a billionaire before he started Xiaomi. He gained prominence as a successful angel investor after starting out as a computer programmer in the early 1990s.

His $1 million investment in 2005 in YY Inc., a Chinese video-based social network, increased in value a hundredfold when it was listed on Nasdaq in 2012. In 2006, Lei and several friends invest 4 million yuan ($603.1 million) in Chinese web browser UCWeb, which was sold to Alibaba for $4.3 billion in 2014.

Lei has continued to leverage his expertise as Xiaomi chairman and chief executive by investing in more than 210 companies. In addition to broadening Xiaomi's strategy, these companies are expected to deliver substantial financial returns.

"Equity returns from companies in Xiaomi's ecosystem will become a major source of the group's profit," Lei said at the Hong Kong press conference. Xiaomi owns 6.9% of Chinese video streaming platform iQiyi, whose valuation reached more than $2 billion when the company was listed on Nasdaq in March. Huami, Xiaomi's wearable device partner in which is has a 14.9% stake, also went public in February in a $110 million IPO on the New York Stock Exchange. While Xiaomi has not yet been profitable, having lost 6.69 billion yuan in the first three months of 2018, Lei received a share bonus of $1.5 billion ahead of Xiaomi's IPO.

While Lei did not comment on the hefty stock award at the Hong Kong press conference, Xiaomi co-founder and President Lin Bin said the decision was made to commend Lei's eight-year devotion to the company, as well as his efforts in "transforming China's manufacturing industry."

"All board members think he totally deserves it," Lin said.