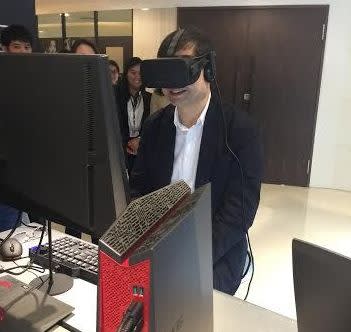 TAIPEI -- Tech giant ASUSTek Computer is expecting growth in its smartphone business to continue as it begins an expansion into virtual reality this year.

"We are aiming to ship 25 million handsets this year, excluding the Chinese market, where there is strong competition," said Chief Executive Jerry Shen on Wednesday. ASUSTek shipped 20 million units of smartphones in 2015, contributing 1.5% of the global market share.

On Tuesday, Facebook-owned Oculus opened the pre-sale of bundles of its Rift headgear and virtual reality-ready computers made by ASUSTek, Alienware and Dell.

"We expect to ship hundreds of thousands of virtual reality ready notebooks this year," said Shen on Wednesday, adding that he expected VR-compatible machines to account for 1% of the company's total PC shipments this year. In 2015, ASUSTek shipped a total of 19.3 million PCs.

"We will also release virtual reality-ready smartphones in the fourth quarter," Shen said, without going into details.

However, Shen said that ASUSTek is not planning to offer VR headgears right away.

"The challenge facing virtual reality solution providers now is whether they can offer a big enough platform that can attract most of the content providers to create apps for them," said Shen. "For ASUSTek, in the initial stage we will work with major virtual reality creators before an ecosystem materializes. It is better for us to enter the market after an ecosystem emerges."

While the Taiwanese PC maker has been aggressively transitioning into mobile and connected device businesses, it continues to struggle amid weakening demand for smartphones and extreme fluctuations in exchange rates.