Myanmar, Cambodia and Laos have been attracting foreign capital for infrastructure. Now, a new wave of investment is bringing cola, cars and more. Gross domestic product has reached $1,000 or so a head, enough for the average person to afford a motorbike and other modest modern conveniences.

By June, Asahi Group will set up a soft-drink company in Myanmar with Loi Hein, a big local player. That will make Asahi the first Japanese beverage maker to put down roots in the Southeast Asian country. It will own 51% of the venture, aiming for 10 billion yen ($96.7 million) in annual sales in 2018.

Asahi may be followed by rival Kirin, which has also had its eye on Myanmar since the country of 60 million people emerged from military rule in 2011. So have many other consumer goods multinationals. In 2012, Coca-Cola returned to Myanmar for the first time in roughly six decades. Denmark's Carlsberg plans to start brewing beer in the country this year.

When it comes to health and beauty products, Anglo-Dutch Unilever and others are putting more energy into Myanmar. Last year, Japan's Unicharm bought Myanmar Care Products and now boasts 50%-plus local market shares in disposable diapers and feminine hygiene products. 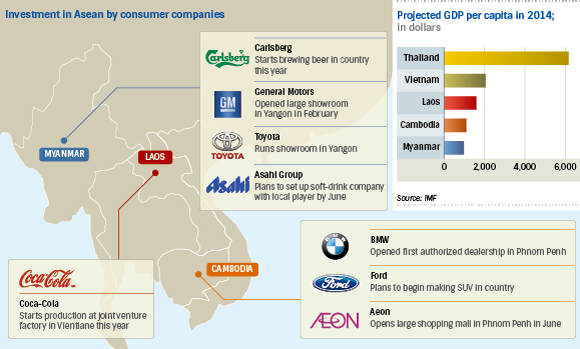 Myanmar also has a budding market for new cars. GM opened a big showroom in Yangon, the country's most-populous city, in February after the government lifted a ban on companies importing new cars. Toyota, too, now has its own showroom in the city.

Cambodia is seeing a similar influx. Japanese retailer Aeon plans to open a big shopping mall in Phnom Penh in June, its first in the country.

Inside is scheduled to be a Japanese restaurant run by Tokyo-based Watami. The company plans to start serving up sushi, sashimi, tempura and other Japanese fare to local customers. The average check per customer is projected at around 1,200 yen. Watami's goal is to later add about three more of the restaurants. The company is keen to cast its net wider in Southeast Asia to capture more of the growing demand for eating out.

Yoshinoya Holdings, the parent of one of Japan's biggest gyudon beef-over-rice chains, opened its first restaurant in Cambodia last November, in Siem Reap, the tourist-frequented gateway to Angkor Wat. Yoshinoya plans to have five shops in Cambodia within five years.

In Laos, Coca-Cola is expected to begin production at a joint venture factory in Vientiane as soon as this year. According to Coca-Cola’s representative, the new plant will employ around 70 people. The factory is expected to generate additional indirect employment for around 500 people.