MUMBAI -- Meal deliveries, online grocery shopping, and other e-retail services are emerging as a lifeline for India's people under a nationwide lockdown, but poor communication between policymakers and police is leading to unintentional crackdowns on goods designated as "essential."

BigBasket, India's top online grocery store, had a message for shoppers on its website Tuesday.

"Dear Customer, we are not operational due to restrictions imposed by local authorities on the movement of goods in spite of clear guidelines provided by central authorities to enable essential services," the company said.

On Amazon.com's Indian website, one grocery item after another, from pulses to cooked beans to sesame pastes, became "currently unavailable" on Tuesday after having been available the day before. Many sellers were apparently withdrawing their products from the online market.

According to sources, Amazon's delivery network has been disrupted by state and city border closures imposed in many parts of India. At local rival Flipkart, owned by U.S. retailer Walmart, "deliveries in certain areas have been affected, and we are offering extended delivery timelines," a spokesperson said Tuesday. A shipment moves on a conveyor belt at an Amazon Fulfillment Center on the outskirts of Bengaluru, India. The company has taken items off its website due to delivery constraints.    © Reuters

These troubles attest to the hurdles to operating e-commerce businesses under India's multiple layers of government. The difficulty has only grown after Prime Minister Narendra Modi called for a 21-day nationwide lockdown starting at midnight on Tuesday.

"Poor communication among different branches of the authorities is damaging consumers' quality of life," said an executive at an e-commerce company under condition of anonymity.

An item sold on Amazon or Flipkart in India typically moves across several states before arriving at the customer's door. After being dispatched from a seller or one of the e-commerce sites' fulfillment centers, it moves to a regional logistics hub and then to a local delivery base before heading to its final destination.

In this long process, the item has to pass through many border control checkpoints put in place during the current lockdowns, raising the risk that it becomes stuck at some point on the way.

Police are also reportedly forcing closures of such facilities as warehouses used by sellers, delivery agents' base offices, and Amazon's and Flipkart's own logistics centers.

By the end of Monday, as many as 30 of India's 36 states and union territories had declared lockdown on private business and public-service activities and told every resident to stay home except for grocery or drug purchases. The national capital territory of Delhi and the states of Punjab and Maharashtra, where the financial capital of Mumbai is located, declared curfews by the end of Monday. 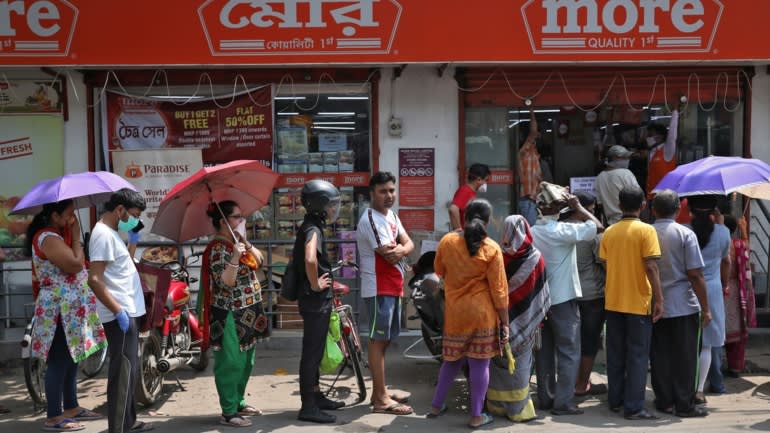 People queue to buy grocery items outside a store before the start of the lockdown by West Bengal on March 23.   © Reuters

In each case, the central or state government said that online retailers and food delivery services were exempt from lockdowns or curfews as they are "essential" to people's lives. But failures in information sharing from policymakers to enforcers on the ground is leading to crackdowns unintended by government.

This confusion comes amid a surge in demand for such e-commerce services, especially online grocery shopping. The top two online grocers, BigBasket and Grofers, both saw a sharp rise in customer traffic starting last week. BigBasket responded by limiting access to its website to existing members, while Grofers started prohibiting purchases of more than one of the same item.

Meanwhile, leading food deliverer Swiggy said on March 20 that "thousands" of restaurants had newly joined its online platform and started offering their menu items for delivery, while many other restaurants had closed instead. Many urban residents and restaurants alike appear to be turning to food delivery now that dining out has become impossible.

Yet on Monday Swiggy was forced to suspend service in some parts of the country due to police crackdowns on their delivery scooters on the street.

The Ministry of Consumer Affairs, Food and Public Distribution told local news channel CNBC TV18 it issued a letter to all state governments asking to ensure that e-commerce operations be exempted from lockdowns or curfew enforcement.