Employees at At NEC's Tokyo headquarters can now get through the facial-recognition-equipped security wickets without having to take off their masks. Sunglasses and hats are OK, too.
EIKI HAYASHI, TOSHIHIRO IHARA & MASAYA SATO, Nikkei staff writersApril 7, 2020 13:03 JST | Japan
CopyCopied

TOKYO -- With the coronavirus pandemic making consumers squeamish about using their fingers, some Japanese companies are rushing solutions to market.

Electronics maker NEC plans to start selling security wickets that can recognize people wearing masks. Fujitec wants to allow elevator passengers to communicate their floor selections with hand signals. Sensor manufacturer Optex intends to do something similar for people who need to open a door. And Toshiba Tec is out to reinvent the much-smudged restaurant menu.

All of these companies are leaders in the global sensor industry, a highly competitive field that greatly benefited from the smartphone boom and is currently riding the incipient "internet of things" wave. Now it is in position to capitalize on consumers' newfound fear of touching things.

Call it the touchless economy.

At NEC, the idea behind its new facial recognition technology is to prevent people from touching their faces, which is pretty much required to remove a mask.

In late March, a "Masks OK" sign appeared at the underground employees' entrance of NEC's Tokyo headquarters. The security wickets, which use NEC-developed facial recognition technology, previously had difficulty recognizing people if they did not remove their masks, sunglasses and hats.

Unlike typical wickets that require employees to hold their ID cards to a sensor, the new system lets workers come and go without having to touch or tap anything. Until recently, people wearing masks still had to take them off, undoing much of the good that masks do, if ever so briefly. Now the wickets' sensors can detect who's under those masks.

Using only the exposed portion of a person's face, the system's software references a person's original image to look for similarities. The system's artificial intelligence makes use of deep learning and more accurately identifies people going through the wickets after being shown photos of the people wearing masks or sunglasses. 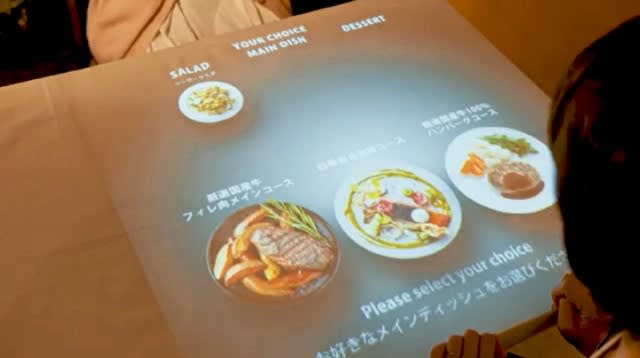 Toshiba Tec is trying to relegate greasy, finger-print-filled restaurant menus to the dustbin of history.

"The number of detailed business discussions we're having about entry and exit systems that can use facial recognition on people wearing masks is increasing," an NEC spokesperson said. The company plans to further increase the system's accuracy through internal testing before it takes the tech to market.

NEC expects to roll out its security wickets in six months.

Elevators are second only to wickets in controlling the flow of foot traffic into and out of office buildings. Fujitec, a major elevator maker, in April unveiled a new model that has an optional feature which allows passengers to select their desired floors by holding hands near infrared sensors.

Fujitec had already developed the sensor technology, but the company had thought it could only sell it to medical facilities or pharmaceutical factories where hygienic conditions are tightly controlled. The pandemic and ensuing paranoia has since given Fujitech a raft of new target customers.

Toshiba Tec, a subsidiary of Toshiba, is trying to use sensors to reinvent the restaurant menu. Its system enables diners to make their selections by projecting menu items on the tabletop and using sensors to take customers' orders. The technology was originally intended to free up table space by eliminating the need for paper menus and tablets, but now more diners want to avoid touching menus.

Sensor manufacturer Optex in Shiga Prefecture developed a noncontact switch to open and close doors. It functions when a person holds a hand over a sensor. The system reduces malfunctions by converting conventional near infrared waves into microwaves (radio waves). The company accelerated its plan to market the system and began selling it in late March. 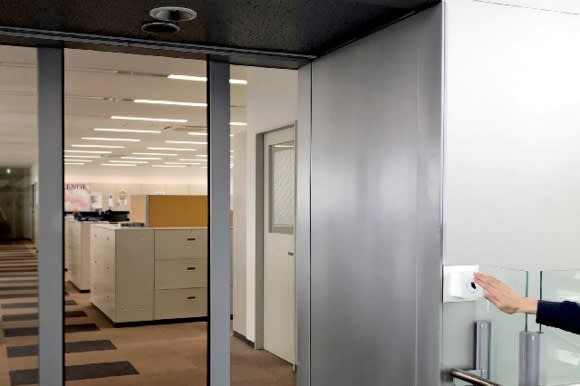 According to a survey by the Japan Electronics and Information Technology Industries Association, Japanese companies make up nearly 50% of the global sensor market.

Sony by itself controls more than half of the global market for CMOS sensors, which convert light into electrons to produce images. They create the pictures that consumers shoot with their smartphone camera or digital camera.

And according to a third-party evaluator, NEC has been producing the most accurate facial recognition sensors for years now.

With the underlying technology already in its tool kit, Japan Inc. has a head start when it comes to developing new products.

Still, though, it has plenty of competition. Switzerland-based STMicroelectronics and other long-standing semiconductor producers hold significant shares of certain markets.

Austrian chipmaker ams is developing miniature sensors that use infrared rays, and Texas Instruments of the U.S. is developing electrostatic sensors.

One day the coronavirus situation will come under relative control, but the risk of infection will remain. In the meantime, the spread of the internet of things is expected to continue, keeping Japanese electronics makers competitive and forcing them to innovate at the same time.