TOCHIGI, Japan -- Japan's top cosmetics company, Shiseido, is counting on the rising middle class in Southeast Asia and China to help achieve its global sales target of at least 1.29 trillion yen ($11.8 billion) in 2020.

Shiseido opened its new factory in Tochigi prefecture, north of Tokyo, last Wednesday, in response to rising demand for "made-in-Japan" products from Asian countries and tourists. The factory's production capability is about 120 million items.

Masahiko Uotani, CEO of Shiseido, said at the news conference after the opening that the company had "squandered" opportunities due to a lack of production capacity. He also emphasized that the new plant will deliver what Shiseido is known for -- safe, reliable, high-quality products that are sensitive to the skin.

Shiseido has allocated around 170 billion yen to expanding production capacity. Apart from this newly opened plant, one each is planned in Osaka and Fukuoka that will be built in 2020 and 2022 respectively.

The Tochigi factory will produce skin care products in the mid- to high-price range including the brands Elixir and IPSA. 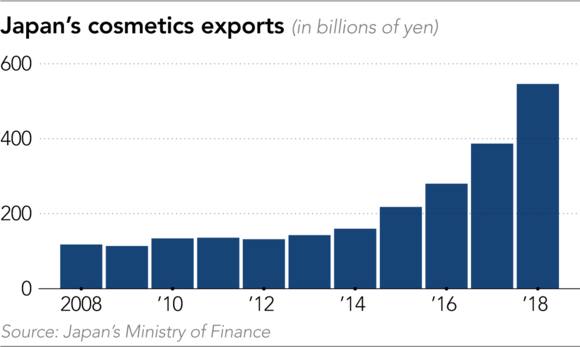 "We will be able to roll out domestic brands which have not been launched yet in some countries," Uotani said.

For instance, Elixir, one of Shiseido's top skin care brands, is sold in Japan, mainland China and Taiwan. But the company has been reluctant to export to other regions such as Southeast Asia due to a lack of production capacity.

Uotani said there is much potential in Southeast Asia, particularly in emerging markets such as Thailand, Malaysia and Indonesia where people are starting to spend more on skin care products with rising income.

The Japanese market still accounts for 41.6% of Shiseido's total revenue in 2018, thanks to a rising number of foreign visitors. Many tourists from China and Southeast Asia often buy consumer goods when they visit Japan.

With so much foreign demand, Shiseido is keen to develop e-commerce platforms including in Southeast Asia.

Global players are also eager to sell "Made in Japan" products in Asia.