Why Japan's 'wandering salarymen' spending boom has been a bust

As habits shift, less overtime does not mean more traffic at cheap eateries Beef-on-rice chain Yoshinoya and other budget restaurants have not seen much of a boost from the government's push to reduce working hours -- dashing their expectations.
NAOFUMI NAKAMURA, Nikkei senior staff writerJuly 8, 2019 17:41 JST | Japan
CopyCopied

TOKYO -- Budget restaurant chains in Japan that are struggling with sluggish sales are wondering: Where are all the "wandering salarymen"?

The Japanese government's work-style reforms, designed to give corporate employees more flexibility and reduce overtime, were widely expected to help affordable eateries. It seemed logical. Workers would pour out of offices earlier, and with extra free time on their hands, they would be more inclined to wander around and pop into standing bars, izakaya Japanese-style pubs and other casual establishments on the way home.

Yet, ramen noodle chain operator Hiday Hidaka left market watchers scratching their heads with its lackluster latest earnings. Customer traffic from March through May fell 3% to 5%, hurting the company's quarterly results -- and hinting at deeper changes in Japanese consumer habits.

Many thought the operator's Hidakaya chain had a competitive advantage as a place to grab a quick drink and meal, since izakaya tend to be more expensive. To an extent, the noodle shops may still be feeling the effects of price hikes implemented in April 2018. But this past March, the chain tried to lure in customers by cutting the price of the first mug of beer to 290 yen ($2.70) from 330 yen. It has little to show for it.

"Though the hours of overtime worked by employees in this country have indeed declined," a company spokesperson said, "overtime pay may have decreased as well."

Hiday Hidaka is not alone. Yoshinoya Holdings, known for its chain of gyudon beef-on-rice restaurants, has not received much help from the work reforms either. The company has been pushing pub-style menu options to pull people in for after-work drinks, but although this generated a buzz for a while, the effects appear to have ebbed.

Customer flows are also weak at Saizeriya, which runs budget Italian restaurants. Like Hidakaya and Yoshinoya, Saizeriya had been counting on newly liberated workers coming in for a few quick, cheap drinks and a meal.

So where is everyone going?

In March, SMBC Consumer Finance surveyed commuting male workers in their 30s and 40s and found that 54% said they usually "drop in some place on the way home." Nearly 60% picked convenience stores as the places they stop.

The same survey found that the respondents spent a monthly average of 11,000 yen while heading home. The results suggest most workers spend little time or money strolling about in the evening.

There appear to be a few factors at play. Diversifying work schedules may have made it more difficult for colleagues to go out for after-hours drinks. In addition, many younger workers apparently prefer to drink at home while relaxing with video games or browsing social media.

The Shinzo Abe government's plan to raise the consumption tax to 10% from 8% could make consumers even more likely to buy snacks and drinks at convenience stores, rather than dining out. Takeout foods will still be subject to an 8% tax rate -- but not those served at restaurants.

Some Japanese businesses are catching on and pushing products that make the home feel a bit more like the pub. 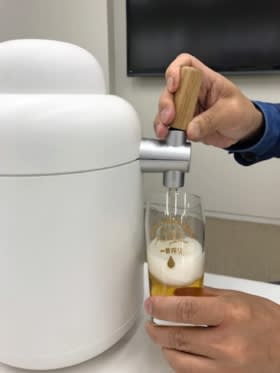 The Kirin Home Tap countertop beer server lets you pour a frothy pint just like the ones at the pub.

A glass of beer poured using Kirin's home keg costs about the same as one in a typical pub.

Kirin started the service in June 2017 at the suggestion of a 30-something employee. Unable to keep up with demand for the servers, it halted the project that September, but restarted production in April this year.

The company's decision to give the idea another try indicates Japan's breweries recognize the need to reach customers directly, given that demand in their major sales channels -- restaurants, as well as supermarkets and convenience stores -- remains slow.

Be it brewers or restaurants, the challenge is the same: There are limits to how much they can grow their operations if they stick to traditional formulas. The only option is to come up with new ways to spark the interest of consumers, wherever they may be.