TOKYO -- Western brands remain the top choices for increasingly wealthy consumers in six major Asian markets, according to a recent survey by The Nikkei.

The survey questioned consumers in six countries -- China, India, Indonesia, Thailand, Vietnam and the Philippines -- about five categories of products and services. Ranked by which brands respondents most wanted to buy or use, European and U.S. names were at the top of the list in all five categories.

The only Asian brands that made it into the top three were Fast Retailing's Uniqlo, in the fast-fashion category, and Sony and Samsung Electronics, in the smartphone and cell phone category.

As the results indicate, the cachet of well-established Western brands continues to give them an edge in Asia.

The Internet-based poll, conducted in October and November by Nikkei Research through local pollsters, surveyed 300 consumers, half men and half women, between the ages of 16 and 59 in each of the six countries. The survey covered a total of 104 brands in five categories. In the newly created category of luxury fashion brands, Gucci came on top of both the "want to buy" and the "have bought" lists. A 31-year-old employee at the Bank of Thailand, the country's central bank, said she recently bought a Gucci bag priced at 30,000 baht ($846), about 70% of her monthly income. "If I like the material, design and quality of a product, I'm willing to buy it (even if it's expensive)," she said.

In the name-brand shopping malls cropping up across Bangkok, Gucci has become as ubiquitous as Louis Vuitton and Chanel.

The company has sharply expanded its presence in East Asia, especially in China, in recent years. In 2014, markets in the Asia-Pacific region excluding Japan accounted for 36% of its total sales of 3.5 billion euros ($3.84 billion).

Gucci's new marketing strategy, aimed at building up its brand value by relying less on wholesale and more on sales through its own stores, has contributed to the sharp sales growth in the region.

In China, Chanel was the most sought-after high-fashion brand. Like Gucci, the French fashion house has markedly increased its penetration of Asian markets.

Chanel stores in China cut the prices of basic handbags by 20% in March, a move that helped bring in more customers.

Like other luxury brands, however, Chanel is facing tougher business conditions in China due to President Xi Jinping's anti-corruption campaign, which includes a crackdown on extravagant spending. The aura of exclusiveness surrounding European high-fashion brands has also faded somewhat in China, making it harder for them to maintain their appeal for consumers there.

Among fast-fashion brands, Spain's Zara maintained its top position on the "want to buy" list, while H&M of Sweden came in second. 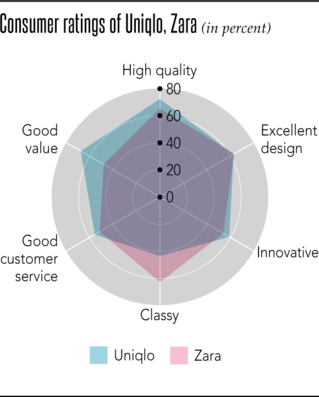 Uniqlo retained its third-place spot on the overall list. The Japanese brand, which was the most sought-after fast-fashion brand in China in this survey and the previous one, also took the top position in Thailand this time around.

Fast Retailing has been adding about 100 Uniqlo stores to its China network each year and now operates more than 400 outlets there. This aggressive expansion has helped boost Uniqlo's brand recognition in China.

To meet Chairman Tadashi Yanai's target of 5 trillion yen ($40 billion) in sales in 2020, Fast Retailing will have to rapidly expand its global business with a focus on Asia.

Uniqlo is trying out new strategies to win over the growing ranks of middle- and upper-class consumers in Asia, including a recent design collaboration with former Hermes designer Christophe Lemair.

Germany continued to dominate the automobile category, with luxury makers BMW, Audi and Mercedes-Benz taking the top three spots on the overall "want to buy" list.

Tony Hermawan, a 34-year-old bank employee in Indonesia, bought a BMW 3 Series model priced at more than 500 million rupiah ($35,800) because of its image as a "young and sporty high-end car."

Hermawan said he used to drive Japanese cars, including a Suzuki and a Honda, but switched to BMW because the brand "never goes out of style."

BMW was the most popular automobile brand in five countries, with China being the only exception. It was described as a "high-quality" brand by 75.1% of the respondents and "classy" by 74.1%.

Japanese automakers took the top four spots on the "have bought" list but lost ground in the "want to buy" rankings. Toyota Motor, for example, slipped from third to fifth on that list.

What is particularly troubling for Japanese automakers is the downtrend in the popularity of their cars in Southeast Asia, where they boast market shares of 80-90%. In Indonesia, Honda Motor fell to second from first, while Toyota slid from second to fifth. In the Philippines, Toyota's plunged from third to ninth on the list.

While Japanese automakers were still rated high in terms of value and customer service, they seem to be losing their desirability among Asian consumers. Among German carmakers, Volkswagen, which has been hit by an emissions fraud scandal, was the only loser, slipping from seventh to 11th on the overall "want to buy" list. The impact of the scandal on the VW brand was especially pronounced in Southeast Asia. By comparison, the German marque held up well in China, where it makes 40% of its sales, falling just one notch to third place.

Apple demonstrated its overwhelming popularity in the smartphone and cell phone category, topping the "want to buy" lists for all six countries.

The new iPhone 6s series has proved especially popular in China, where Apple's sales in the July-September quarter soared 99% on the year.

Samsung, which has the largest share of the global smartphone market, came in second on the overall list, but it showed signs that it is losing some of its luster. In India, for instance, the brand fell to fourth place.

"Around a year ago, Samsung products accounted for 70-80% of our smartphone sales, but now they make up only 50%," said a sales clerk at a mobile phone shop in southern Mumbai.

Sony retained its third-place position. The Japanese electronics maker has focused on high-valued-added products and became the first company in the world to sell a smartphone with a 4K display. The strategy seems to be paying off.

Sony sees Southeast Asia as a key market. It is building a smartphone plant in Thailand for integrated manufacturing operations, starting with the mounting of electronics parts.

E-commerce players took the highest spots in the Internet services categoy. The "want to use" list was topped by Amazon.com, which leapfrogged Google and Facebook to the No. 1 position from third place in the previous survey.

Amazon operates regional sites in only two of the six countries covered by the survey, China and India, and so came in seventh on the "have used" list.

With the number of consumers using Amazon's U.S. site on the rise, however, expectations are growing that the e-commerce giant will soon launch more local sites.

Alibaba, China's largest electric commerce service, was ranked sixth overall, but its online payment service, Alipay, took the top spot on the "want to use list" in China. Alipay has expanded its operations not only as a platform e-commerce payments but also as a convenient means of settlement for other transactions. More than 90% of the Chinese survey respondents said they had used Alipay's services.

While social networking services and free chat apps generally failed to gain ground, Instagram, the U.S. online photo-sharing service, shot to the top of the list in India, rising from 10th in the previous survey.

Asia's selfie boom, fueled by the wider use of smartphones, is one reason Instagram has been able to gain popularity so rapidly.