Businesses make the most of Ramadan shopping season

JAKARTA -- As the Islamic holy month of Ramadan enters its final week, retailers across Muslim countries in Asia are looking for new ways to take advantage of the year's biggest sales season. 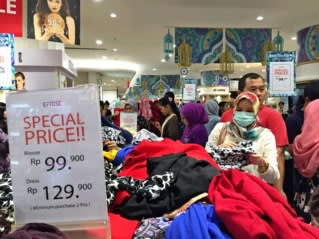 A midnight sales event on July 11 brought crowds of bargain-hunting shoppers to a mall in central Jakarta.

The Plaza Semanggi shopping mall, located in the heart of the Indonesian capital, was still bustling at 10 p.m. on July 11. Normally, the mall closes at that hour, but stores stayed open for midnight sales. Discounts of up to 70% and gift cards of 50,000 rupiah ($3.75) for anyone spending 500,000 rupiah or more lured large crowds of shoppers.

A 20-year-old college student came to the event with her family and friends. "I look forward to this event every year," she said. This year, she bought a 200,000 rupiah skirt and other items for her upcoming vacation to Bali.

While the exact dates of Ramadan, the ninth month of the Islamic calendar, vary from year to year, this year it falls on June 18 to July 16. Muslims around the globe celebrate the month by fasting from sunrise to sunset. Once the sun goes down, however, many of them go out with families and friends to enjoy a lavish dinner.

This means that during Ramadan, people tend to spend money mostly at night. Shopping malls and other retailers respond to this change in consumer behavior by holding sales and other special events after dark.

In Indonesia, Ramadan ends with the two-day Idul Fitri holiday, and many locals take a week or so off from work around this time.

Moreover, Indonesian companies typically give employees a bonus during Ramadan equal to one month's wages or more. Many people use this extra money to return to their hometowns during their time off. They also tend to buy clothing and other items during this time of year, creating consumption spike.

Matahari Department Store, Indonesia's No. 1 department store chain with just over 130 stores across the country, reportedly generates roughly 30% of its annual sales during the June-July Ramadan season.

Ramadan sales events in Jakarta, like the midnight sale at Plaza Semanggi, are held as part of the "Jakarta Great Sale" sales campaign. This year's campaign, which was sponsored by the Indonesian Shopping Center Management Association, ran from June 6 to July 12, with a record 78 commercial facilities participating. The preliminary sales figure for the campaign, excluding the last day's haul, came to 14.5 trillion rupiah, an increase of 7% from the previous year. Total sales halfway through Ramadan were more than 20% lower than a year earlier, but the participating commercial facilities managed to turn the tide by expanding the scope of their discounts. Malls also held midnight sales on different dates, compared to last year when they were concentrated on a few days.

Still, many retailers faced a headwind this Ramadan period, as consumer spending has been slowing due to inflation stemming from the weakening rupiah. The situation will likely become even more difficult once Ramadan ends.

It is a similar story in Kuala Lumpur, where this year's Ramadan sales are shaping up to be a disappointment. Stalls selling meals and clothing fill the streets each night in the Malaysian capital, but business has been less brisk this year, largely due to the introduction of a sales tax in April. A hotel restaurant that serves special dinners after the day's fasting ends has reported a 30% sales drop from last year's Ramadan season.

In Dubai, the United Arab Emirates, electronics retailers and automobile dealers have been working particularly hard to tap Ramadan demand. Jumbo Electronics, a major consumer electronics retailer, has been giving customers who buy a notebook computer gift cards worth 400 dirham ($108). Among car dealerships, Juma Al Majid has been offering discounts of up to 10,000 dirham. Despite these efforts, this year's Ramadan sales are unlikely to match the strong figures posted last year.

Some countries may see lackluster Ramadan sales this year, but there is little doubt that their consumer markets will expand sharply in the future.

The Pew Research Center in the U.S. forecasts that Asia's Muslim population will grow to roughly 1.5 billion by 2050 from the estimated around 1 billion today, due to its relatively young age and comparatively high birth rate.

To better tap this growing market, Japan's Fast Retailing launched a new clothing brand for Muslim women in Singapore and elsewhere this month. The Uniqlo x Hana Tajima Collection, a collaboration between the retailer and the U.K.-born fashion designer and blogger, offers a lineup that ranges from hijab headscarves to long-sleeve shirts and long pants, which are mostly priced at the equivalent of around $16 to $32.

Companies from non-Muslim countries are also starting to recognize the special opportunities that the Ramadan period presents. Uber Technologies, the U.S. company behind taxi hailing service Uber, has teamed up with local restaurants to provide a food delivery service in Jakarta during this year's Ramadan.

The service lets customers use the Uber smartphone app to order meals between 5 p.m. and 8 p.m. and have them delivered to their place of work. The service is aimed at workers in the city who do not want to endure Jakarta's notorious traffic jams -- which become even worse during Ramadan -- on an empty stomach.

Tomomi Kikuchi and Wataru Yoshida in Singapore and Takeshi Kumon in Dubai contributed to this story.