TOKYO -- The Japanese boutique retailer Ships will open new sections at some of its stores this autumn specifically meant to attract foreign tourists. Called Ships Souvenirs, the new areas will sell tableware, socks and other uniquely Japanese goods. 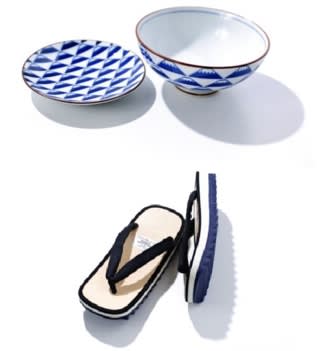 A bowl with a Mount Fuji pattern and traditional sandals, which will be available soon at Ships Souvenirs.

The first Ships Souvenirs will open at the company's outlet in Tokyo's fashion mecca of Harajuku. Similar sections will then be opened at other Ships stores in major cities that tend to attract many tourists.