Doraemon plans to make US debut this summer

TOKYO -- The popular Japanese animation series Doraemon will debut across the U.S. this summer on a Disney channel. 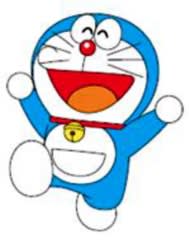 The show featuring a robotic cat from the future and its life with the schoolchild Nobita has been broadcast in Japan for more than 40 years. It has aired in 35 markets including in Southeast Asia and Europe, but not the U.S.

TV Asahi, which owns the sales license for the U.S., has reached an agreement with Disney to broadcast a version dubbed into English on the Disney XD channel, which covers 78 million households across the country.

Positioned as a key program targeting younger elementary-school students, it will be shown five times a week.

The three Japanese companies holding the copyrights -- TV Asahi, subsidiary Shin-Ei Animation, and the manga production company established by one of the original Doraemon authors -- will entrust the production of the English version to local studios.

The story and the names of characters and gadgets will be modified to suit the American cultural background. Unlike pirated copies, this English version will meet strict U.S. standards on depiction of violence, discrimination and sexual images, opening the possibility of bringing it to other English-speaking markets as well.