OSAKA -- Mister Donut operator Duskin announced another new pastry offering Monday as part of its bid to leverage unique, fresh-baked goods to deal with the rising threat from convenience stores.

The Brooklyn Merry-Go-Round, which uses both cookie and bagel dough, will debut Thursday. It will cost 172 yen ($1.43) in most areas -- more than the roughly 100 yen to 120 yen of the company's standard offerings. But Mister Donut still aims to sell 10 million of them in three months, compared with 4 million or so for typical products. 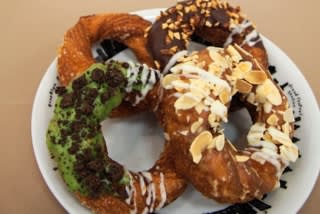 The new cookie-bagel hybrid follows in the footsteps of Mister Donut's hit rendition of the croissant-doughnut.

This bullishness is backed by experience. In April 2014, the company launched a croissant-style doughnut priced at 172 yen to 194 yen. It sold more than 41 million of the treats in a year despite the Japanese consumption tax hike that took effect the same month. Same-store sales in the doughnut business, including affiliated franchises, likely rose for the first time in six years in fiscal 2014, topping the 103 billion yen of fiscal 2013.

"We're coming out with products that go against [our old image] in a positive way," said the head of Duskin's Mister Donut operations. Going forward, the company will launch new key products quarterly while maintaining its standard menu.

As early as summer, the doughnut purveyor will adjust its production process, including the recipe and oil temperature, to shrink its batch size to between 20 and 30 doughnuts from around 70 now.

The small-batch baking will ensure that fresher products are stocked on store shelves. Mister Donut hopes to plant the idea among consumers that freshly baked doughnuts are a bit better.

Doughnut with your coffee?

Differences in clientele are also emerging. About 60% of Mister Donut customers purchase doughnuts to take out, often to their families. Many doughnut buyers at convenience stores happen to pick them up while getting fresh-brewed coffee.

Seven-Eleven Japan started selling doughnuts last November. When the news broke Nov. 20, Duskin shares closed down 4.5%, or 82 yen, on concerns about the impact on Mister Donut. And FamilyMart will start offering a broader lineup of bagged doughnuts Tuesday.

Customers are drawn to convenience stores because they are ubiquitous and stock other products. Japan has 1,350 Mister Donut locations -- but 10 times as many Seven-Eleven stores, all of which will be selling doughnuts by the end of August.

Mister Donut had long nearly monopolized the nation's doughnut market. With the company's limited concept of a doughnut keeping it from releasing innovative new products, sales had steadily declined in recent years. Whether the emergence of a rival will spur it onward remains to be seen.