TOKYO -- Apple's new low-cost iPhone model went on sale in Japan on Thursday ahead of many other markets, but it failed to spark a mania, unlike its predecessors.

The familiar sight of long lines outside stores on the first day was nonexistent this time around. Sellers, such as mobile phone carriers and major consumer electronics retailers, did not try to play up the occasion with big launch events, either. 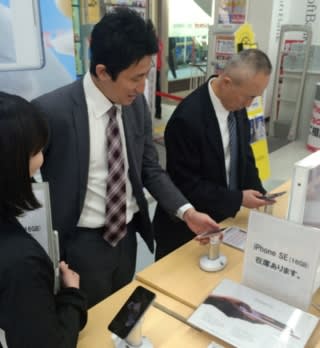 Still, the Yurakucho store of Bic Camera opened at 9:30 a.m., 30 minutes earlier than usual, to begin selling the iPhone SE.

"With a smaller screen, this model is more convenient," said an office worker in his 30s, who came to the central Tokyo store to buy the phone on his way to work.

To prevent iPhone launches from creating chaos at its stores, Bic Camera has adopted a system of only selling new models to people who preordered the handset. Because they can pick up their phone from the store at a predesignated time, first-day sales of the SE went off without a hitch. Chinese visitors looking to pick up the phone before it launches at home, a practice common with previous iPhones, was also hardly noticeable this time around.

The main selling points of the SE are a compact screen and low price. The handset offers nearly identical functions as the iPhone 6s, the current flagship model, but with a 4-inch screen, the same size as on the iPhone 5s. The 16GB SE sells for 52,800 yen ($470) excluding taxes at Apple's directly run stores, about 40,000 yen cheaper than the 6s.

With some package deals offered by major wireless carriers, such as NTT Docomo, KDDI and SoftBank Group, people can get an SE by paying virtually nothing upfront. While the carriers claim that they have received solid numbers of preorders, some insiders admit that demand has been weaker than with previous iPhone releases.

People appear more interested in the next iPhone update, expected later this year, than in the SE, which is basically just a cut-price version of the 6s. Some large consumer electronics retailers are reported to be holding smaller inventories of the SE than of the 6s.