'Pokemon Go' players, it's time to meet your teammates

New monsters can only be captured by collaborating with others TOKYO -- It has been a year since "Pokemon Go" hatched and almost instantly became a global phenomenon. Now it is evolving. A new feature is turning the smartphone game into a powerful incentive to find teammates, then work toward common goals.

We recently interviewed Tatsuo Nomura, a former Google employee who was involved in the development of Pokemon Go at Niantic, to find out where the game is heading.

Pokemon Go was released in the U.S. and two other countries early last July. It quickly became one of the most popular mobile games ever, downloaded over 750 million times around the world. It was released in Japan later that month.

In each of the some 150 countries and areas where the game became available, masses of people began roaming streets and open spaces to find and capture Pokemon monsters that, through the magic of augmented reality, can appear as though they have traveled to the real world. 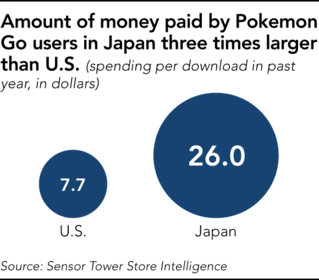 "We wanted to create a game that makes people do three things -- explore, exercise and socialize," Nomura said. "This was achieved at the moment the game was launched. Since we wanted players to meet others through the game, we designed it to stimulate people's basic impulse to go out and capture animals. This feature has apparently captured the minds and hearts of more people across the world than we had imagined."

There are now 65 million Pokemon Go users who play the game at least once a month, including 4.42 million in Japan, according to Values, a Tokyo-based research firm.

The current number of active users in Japan is less than half the figure immediately after the game was released in the country but has remained almost unchanged for the past eight months. The amount of money Japanese players have spent on items and features in the past year is three times more than the amount their American counterparts have chipped in, according to one survey.

A feature that was added to the game in late June, Raid Battle, is beginning to swell the ranks of players again.

Raid Battles are collaborative fights between teams of up to 20 players and one big, powerful Pokemon that can appear in a Pokemon gym, a battle location for team-based matches. 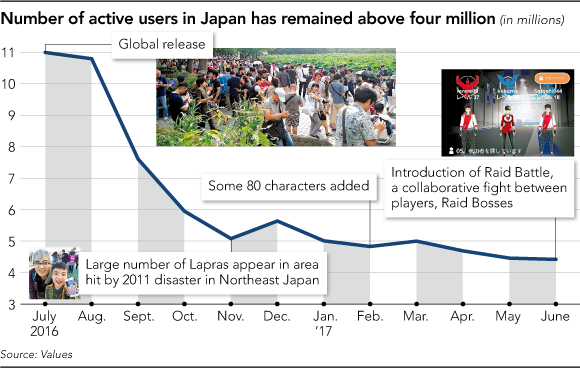 Niantic was created inside Google and spun off in 2015. Its developers designed Raid Battle as a way for beginners to work together with skilled and experienced players to collect powerful monsters.

"The number of users is now rebounding," said Nomura, who first joined Google Japan, then moved to its U.S. parent in 2013 and finally jumped to Niantic. "We are unlikely to see again the kind of mania the game created last year. But we are working to ensure a steady increase in the number of players by, for instance, luring back some of the people who have stopped playing."

"It is easy to make the game increasingly more difficult to play [to retain hardcore gamers], but ... we want to create a game that hardcore players and casual players can enjoy together. As for charging, we don't want to target any specific type of users. Data show a wide range of players actually pay money, mostly in small amounts."

An event to mark the first anniversary of the release of Pokemon Go will be held on Saturday in Chicago. It is meant to showcase the game's ability to connect people.

The more Pokemon characters that players collect at the event site and other parts of the world, the more items and other special benefits they can earn.

The game will bring in legendary monsters -- Lugia's debut has long been rumored in internet circles -- to increase its fan base.

"We will soon witness the long-awaited introduction of legendary Pokemon through Raid Battles," Nomura said. "There are many of them, and we want players to anxiously look forward to finding which of them will come first. Legendary Pokemon are so strong that players need to join forces to fight them."

More than 800 Pokemon characters have been created over the years. They form a rich pool for Pokemon Go to dip into to attract or keep players.

"Pikachu is more famous around the world than any Japanese," Nomura said. "Everybody in every country knows the character. There is no other such amazing content. Pokemon as a brand has kept expanding."

Pokemon Go, however, is not a practical app like Google Maps; it needs to keep offering fun new features to retain users.

"Niantic, by origin, is not a game developer," Nomura said. "Traditionally, video games have been played inside living rooms with players sitting on couches. But we hit upon the idea of enticing gamers into spending some time outdoors. For us, games are a means of expression.

"We can also live without Facebook. But we use it because we want to connect and communicate with other people. We are hoping to make Pokemon Go an integrated part of people's daily and social lives, even if it is only played while out exercising. We believe we need to move it beyond the traditional boundaries of video gaming."