GUANGZHOU, China  -- Ma Huateng has the fear for all the right reasons.

The CEO of Tencent Holdings said last November, "Our stock price is so high that it frightens me." Tencent's stock price in October temporarily reached a level 80% higher than at the end of 2012. The company has the highest market capitalization of any Asian Internet company. 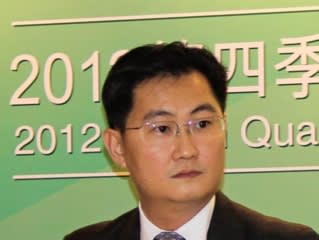 The popularity of WeChat, the company's chat application, helped push up Tencent's stock price. The number of people registered for the service exceeds 600 million. More than 300 million use it monthly. The number of users is likely to this year continue growing through overseas marketing and the spread of smartphones in China.

Tencent's chat app is unrivalled in China. Abroad, companies such as Japan's Line are challengers. The company expanded in 2013 into online shopping on WeChat, and faces competition from Alibaba Group, China's largest e-commerce company. There is still a long way to go before Ma's company has trul;y pulled away from the pack. 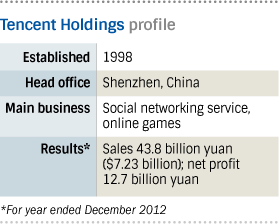 Ma, an engineer, is known for his calm and cool personality.