SHANGHAI Macau passed Las Vegas as a casino market years ago thanks especially to its flourishing baccarat tables. Macau's slot market, on the other hand, still lags behind that of its American counterpart.

Tony Payne, a veteran of the U.S. slot machine industry, decided the problem might be that Macau's slots were not designed for the local market. "We thought that we could do better," he said.

Ten years ago, Payne and American software engineer Justin Nguyen, both of whom previously worked for U.S. machine startup Silicon Gaming, began designing and building slot machines in Shanghai for their new company, Aspect Gaming. They raised about $18 million from China-focused venture capital fund GSR Ventures and other investors and recruited staff from rival Aristocrat Leisure as well as eBay, Google and Alibaba Group Holding.

"The goal was to start developing games specifically for the Chinese players in Macau," said Payne, now the chief executive.

Shanghai might seem an unusual operating base for a slot machine company. Gambling in general is illegal in China, but units that resemble slot machines, known as video lottery terminals, have been deployed by the country's two state-run lottery networks. 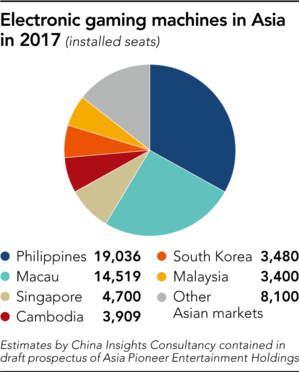 To acquaint its 25 staff in Shanghai with the market, Aspect sends them periodically to Macau to try out machines and to get inspiration.

"So far, that's worked," Payne said. "We have gotten a lot of great ideas."

Aspect has avoided any run-ins with local authorities and does not compete in the video lottery terminal market. Other players have not been so lucky. Eighteen employees of Australian casino operator Crown Resorts were detained last year for allegedly violating restrictions on promoting gambling and the company said June 13 that charges had been filed against its staff, some of whom remain in detention.

FOOT IN THE DOOR Aspect has yet to make a major dent in the Macau market, however. The local government counted 13,826 gambling machines in operation as of Dec. 31; only around 100 came from Aspect, according to Payne. His customers include Galaxy Entertainment Group which deploys them at its flagship Galaxy Macau casino. Units have also been sold to MGM China, Melco Resorts & Entertainment, Wynn Macau and SJM Holdings.

The top seven players in the Macau gambling machine market held 90% of sector revenues as of 2015, according to a draft prospectus for a Hong Kong stock offering by machine supplier Asia Pioneer Entertainment Holdings. The dominant machine supplier in Macau, identified elsewhere as Australia's Aristocrat Leisure, held a third of the market.

"Understandably a lot of casino operators want to go with something that they know will work," Payne said. "That's been a challenge for us."

The bigger players are able to leverage their existing relationships with casino operators. A proven record of mass production with stable quality is a key advantage, Asia Pioneer noted.

"It is especially difficult for new entrants to enter into the business without sufficient cash flow to build production capacity," Asia Pioneer's draft prospectus said. It noted the average price of gambling machines sold in Macau in 2015 was $12,500 per station and counted the sale of 2,906 gambling stations that year.

Macau does not allow "revenue sharing" -- where the supplier retains ownership and takes a share of the winnings -- that can sometimes make it easier for a maker to get its foot in the door.

"Getting a new slot product on the floor from an untested and unproven manufacturer is difficult," said Andrew Klebanow, a Las Vegas-based senior partner at consultancy Global Market Advisors.

Revenue sharing is allowed in Cambodia and the Philippines. Aspect has successfully placed machines with Nagacorp's NagaWorld casino in Phnom Penh and Bloomberry Resorts' Solaire Casino in Manila.

FOLK TALES One of Aspect's most popular games is "Backyard Gold," which is based on a Chinese folk story about a foolish farmer who finds a hoard of gold, buries it in the ground with a notice saying, "There's no gold here." Other designs revolve around the Chinese zodiac or Hong Kong celebrities. 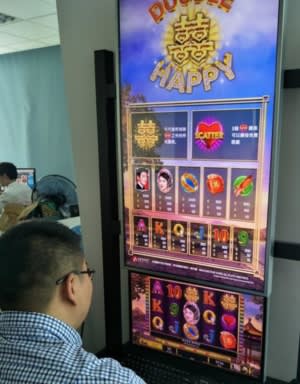 Designing slots that appeal to Chinese gamblers is key to Aspect's business. (Courtesy of Aspect Gaming)

"Aspect is the first [company] and only one I know of who has based their creative studio in China," said Ben Lee, managing partner of Macau gambling consultancy IgamiX. "Nobody else has done that, tried to study the Asian mindset." In his view, Asian gambling machine players are looking for high stakes, big payouts, long playtime and bonus features that appeal to their love for bargain-hunting.

In the view of Natasha Dow Schull, a cultural anthropologist at New York University and author of "Addiction by Design: Machine Gambling in Las Vegas," Asia remains "the most promising foreign frontier for the spread of machine gambling." As estimated in Asia Pioneer's draft prospectus, Asia is now home to 52,202 gambling machines, about the same number as in Las Vegas' two main casino clusters, according to Nevada Gaming Control Board figures.

Aspect co-founder Nguyen, who previously served as president and chief executive, left the company last July after its acquisition "by [a] Macau-based conglomerate," according to his LinkedIn page. Payne declined to name the new owner, but Nguyen was replaced as the sole director of Aspect Gaming (Hong Kong) by Gary G. Huang, an American resident of Hong Kong.

Earlier this year, Aspect formed a strategic partnership to promote its games in online casinos via Gameiom, an electronic wallet platform. Five of Aspect's games are now available on the website of William Hill, one of Europe's biggest betting companies. Payne, though, said Aspect is seeking to avoid online platforms that target mainland Chinese.

"We are strictly a game creator but how does China see this?" he said. "I don't know and that's something that makes me nervous, and I don't want to be a part of it."

Real-world casinos remain Payne's focus. "Part of the [gambling] experience is going to the casino, the dinner you have before and after, the anticipation of getting there, the whole atmosphere," he said. "Casinos aren't going to go away. They are going to get bigger."