TOKYO -- By 2040, Japan's population is expected to shrink to 107.3 million people, 20 million fewer than today. For the food and restaurant industries, this means a smaller labor pool and fewer potential customers. Enter androids, artificial intelligence and other cutting-edge technology with new solutions for a range of pressing problems.

Before too long, customers may walk into a restaurant and find themselves greeted not by a flesh-and-blood waiter but by a friendly robot. 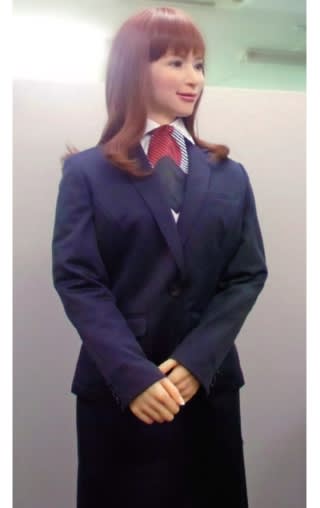 Henn-na Hotel in Huis Ten Bosch uses humanoid Actroid robots like the one pictured as receptionists.

For visitors to Henn-na-Hotel, located in the Huis Ten Bosch amusement park in Sasebo, Nagasaki Prefecture, such a scenario is already a reality. Guests there can check in and check out with the assistance of a robot receptionist.

The hotel, which opened in July 2015, uses a customized version of the Actroid robots developed by Tokyo-based Kokoro. The company has provided interactive robots for numerous showrooms and museums.

From a distance, it is easy to mistake one of the hotel's nonhuman receptionists for a real woman. In addition to the exceptionally lifelike texture of her hair and skin, she also boasts natural-looking facial expressions and fluid movements, obtained by the use of a mechanism that sends compressed air through tubes.

"Programming in typical conversation patterns would be enough to allow the robot to provide basic customer service at a restaurant," said Hideaki Sakurai, a manager in the robot technology department of Kokoro's sales section.

There are also new applications for an existing technology, namely 3-D printers.

The XYZ Food Printer, from Taiwan-based XYZprinting, uses a fine-tipped nozzle and cartridges filled not with resin but with pureed ingredients. During a demonstration, the machine took about 22 minutes to layer dough made from a store-bought cookie mix into the shape of an animal. The dough was then baked in an oven.

At a trade fair in Taiwan, the printer carried a tentative price tag of $1,799. XYZprinting has not decided when it will launch the product in Japan. The device could provide a novel way for shops and restaurants to attract customers, but for it to obtain widespread use, the printing time will have to be shortened.

Perhaps the biggest challenge for restaurant operators and chefs is coming up with new, inventive dishes to keep diners coming back to the table. A collaborative project featuring Watson, IBM's AI computer system, aims to make that task much easier.

The Chef Watson website contains data from more than 9,000 recipes published in Bon Appetit, a popular American food magazine. When a user enters multiple keywords, Watson uses that information to come up with inventive new recipes. Users can also choose keywords related to cooking method, such as "sauteed" and "steamed," and style, such as Japanese or Italian.

Another area of potential promise lies in the wider application of an innovative freezing technique. Tekunikan, a small company located in Yokohama, just outside Tokyo, has developed a new generation of freezers that are being used both in Japan and abroad.

Conventional freezers use cold-air circulation to freeze items. Because freezing progresses slowly with this method, the moisture inside the cells of the food can grow into large, spiky ice crystals. These spikes can damage the cells and cause a loss of moisture during thawing.

Tekunikan's method involves dipping the items to be frozen in a special liquid with high thermal conductivity. This helps the food to freeze rapidly, before the moisture it contains can grow into large, damaging crystals. The result: Fresher, more flavorful ingredients. 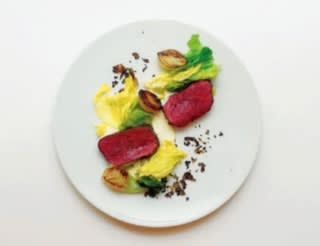 Chef Shinobu Namae created this French dish based on a suggestion by the Chef Watson website.

The company's large commercial freezers using this technology are priced at tens of thousands of dollars and have been bought by 1,400 domestic businesses. Tekunikan has also sold the freezers in 35 other countries.

The main buyers so far have been large food makers and major restaurant chains, but there are potential benefits for a wider segment of customers, including small restaurants. For example, food could be prepared in central kitchens and delivered, frozen but fresh-tasting, to eateries. This would allow even restaurants with a small number of employees to provide mouthwatering meals.