TOKYO/CHICAGO -- Japanese are said to have an affinity for humanoid robots, thanks to popular cartoon characters such as Astro Boy and Doraemon. Now companies big and small are getting serious about commercializing personal robots for home and health care use. And they are passionate about giving their machines a human touch.

SoftBank Group's pint-size robot Pepper exemplifies the trend. It speaks with a soft voice, using comical words and body language to establish an emotional connection with its human interlocutors. Pepper also senses the mood of humans in a conversation, picking up on visual and auditory cues in people's faces and voices. It spontaneously starts talking to family members when they come home. In a nutshell, the automaton grasps the basics of communication.

I feel for you

"Pepper is the very first robot that has and understands emotions," Masayoshi Son, SoftBank's chairman and CEO, declared in mid-June when he announced the robot was going on sale in Japan. "Our focus is to create a robot that people see as a living thing rather than something that helps with chores," Kenichi Yoshida, vice president of business development at SoftBank Robotics, told the Nikkei Asian Review.

So far, the most practical application for Pepper is in customer service, according to Yoshida. "A company can hire Pepper at much lower cost than people to do the same job," he said. SoftBank has put Pepper to work in its mobile phone stores as a greeter and "small-talker."

Swiss food company Nestle has ordered 1,000 of the robots for its outlets promoting the Nescafe coffee maker. The mechanical assistants will give tips to visitors. Pepper can also gather useful marketing data, such as the number and sex of customers, which store areas they visit most frequently and what percentage of people who walk in the door actually buy something.

One of Pepper's features is its open architecture. With a Linux-based operating system and various open source software interfaces, companies and individuals can develop their own software for the robot, just like with personal computers and smartphones.

All Pepper robots come equipped with a cloud-based artificial intelligence system that collects data from units around the world to develop a vast database. The goal is to improve each robot's communication skills. Third-party developers and service companies can also take advantage of the database to improve their products.

Several thousand developers have already registered to create apps for Pepper, said Yoshida. SoftBank hopes one or two "killer apps" will help Pepper take off around the world, just as email and Web browsers helped bring PCs into the home in the 1990s.

At a price of around $1,650, SoftBank claims Pepper is ready for the mass market. It sold out its initial production run of 2,000 robots for June and July on the first day Pepper went on sale. "The concept of a home robot seems natural to Japanese users," said Angelica Lim, a Canadian software manager at Aldebaran, SoftBank's robotics subsidiary in Paris.

Other Japanese telecom companies are jumping into the home robot fray. Nippon Telegraph and Telephone and NTT Data have announced a partnership with Vstone, an Osaka-based startup that has developed a tabletop humanoid robot called Sota. NTT group plans to offer a monthly subscription that connects Sota to the Internet and other electronic devices in the home.

Sota can monitor people's health using sensors to measure body temperature, pulse and blood pressure, for example. Sota will go for around $800, while the subscription will cost less than $100 a month. Separately, NTT Docomo and Tomy have developed a toy robot due to go on sale later this year.

The third big telecom carrier in Japan, KDDI, has announced an investment in Boston-based Jibo, a startup that grew out of the Massachusetts Institute of Technology. The investment, made through KDDI's Open Innovation Fund, is a bet on the Internet of Things, which promises to bring myriad devices online. KDDI plans to market Jibo's eponymous robots in Japan. Jibo is billed as a robot with social intelligence that is good at communicating and engaging with people.

In Japan and other Asian countries, it seems inevitable that robots with social skills will take the role of pets or companions to alleviate stress and feelings of loneliness as populations age and service workers grow scarce. South Korea, China and other robot-loving countries are also struggling with graying populations. The service robot market is expected outstrip the industrial robot market by 2020, reaching $80 billion by 2035, according to some estimates.

Thus, it comes as no surprise that Foxconn Technology of Taiwan and China's Alibaba Group Holding decided to team up with SoftBank in the robot business. At SoftBank's mid-June announcement of Pepper's debut in Japan, the two Asian tech leaders themselves announced plans to invest in SoftBank's robotics division. The pair is planning to start marketing Pepper robots in China and Taiwan later this year.

At an exhibition titled "Robot Revolution" at the Chicago Museum of Science and Industry, an "animaloid" robot from Japan is attracting particular attention among some 40 cutting-edge robots from nine countries.

The seal-shaped robot Paro looks like a stuffed animal but is actually a "therapy robot" designed to help people with dementia and other cognitive disorders. Paro is packed with sensors and reacts to touch and voice by moving its head and tail, and by blinking endearingly at the user. 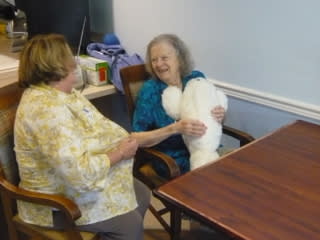 A dementia patient holds Paro, a therapy robot, at Sunny View Retirement Community, a nursing home in Cupertino, California. (Photo courtesy of the National Institute of Advanced Industrial Science and Technology of Japan)

When its battery needs to be topped up, a charge is supplied through an electronic pacifier that fits in its mouth, and the robot goes to sleep. When it wakes up, it makes a sound similar to a real baby harp seal. Paro is a huge hit with children at the exhibit.

Its owner can give it a new name, which the robot remembers after hearing it a few times. It even learns what types of actions its owner likes. Many people respond to the robot as they would to a pet.

Clinical research has shown that Paro elevates the moods of elderly dementia patients and makes them more engaged.

At present, about 3,500 Paro robots are in use in more than 30 countries. Some 200 have been shipped to the U.S., where the government has certified them for use in neurological therapy. Washington itself is a major customer, with the Department of Veterans Affairs using them to treat patients with post-traumatic stress disorder and Alzheimer's disease. Paro has even been certified as the "world's most therapeutic robot" by Guinness World Records.

Intelligent System, a startup based in Japan's Toyama Prefecture, is conducting research and development on new Paro models. Daiwa House Industry, a Japanese homebuilder, markets the robot in Japan.

Paro was developed in the 1990s by Takanori Shibata, now a chief senior researcher at the National Institute of Advanced Industrial Science and Technology (AIST). In addition to the digital technology and artificial intelligence packed into the device, Shibata emphasizes the importance of human elements, such as the good feelings people get when they touch, hug and speak to Paro. Shibata even incorporated a heat sensor and a heater so that the mechanical seal maintains an appropriate body temperature. The motors used in the joints are designed to move silently, a trick accomplished through a combination of advanced technology and Japanese attention to detail.

"Although many companies have tried to mimic the robot, all of these attempts ended in failure because they were unable to copy Japanese craftsmanship," Shibata said.