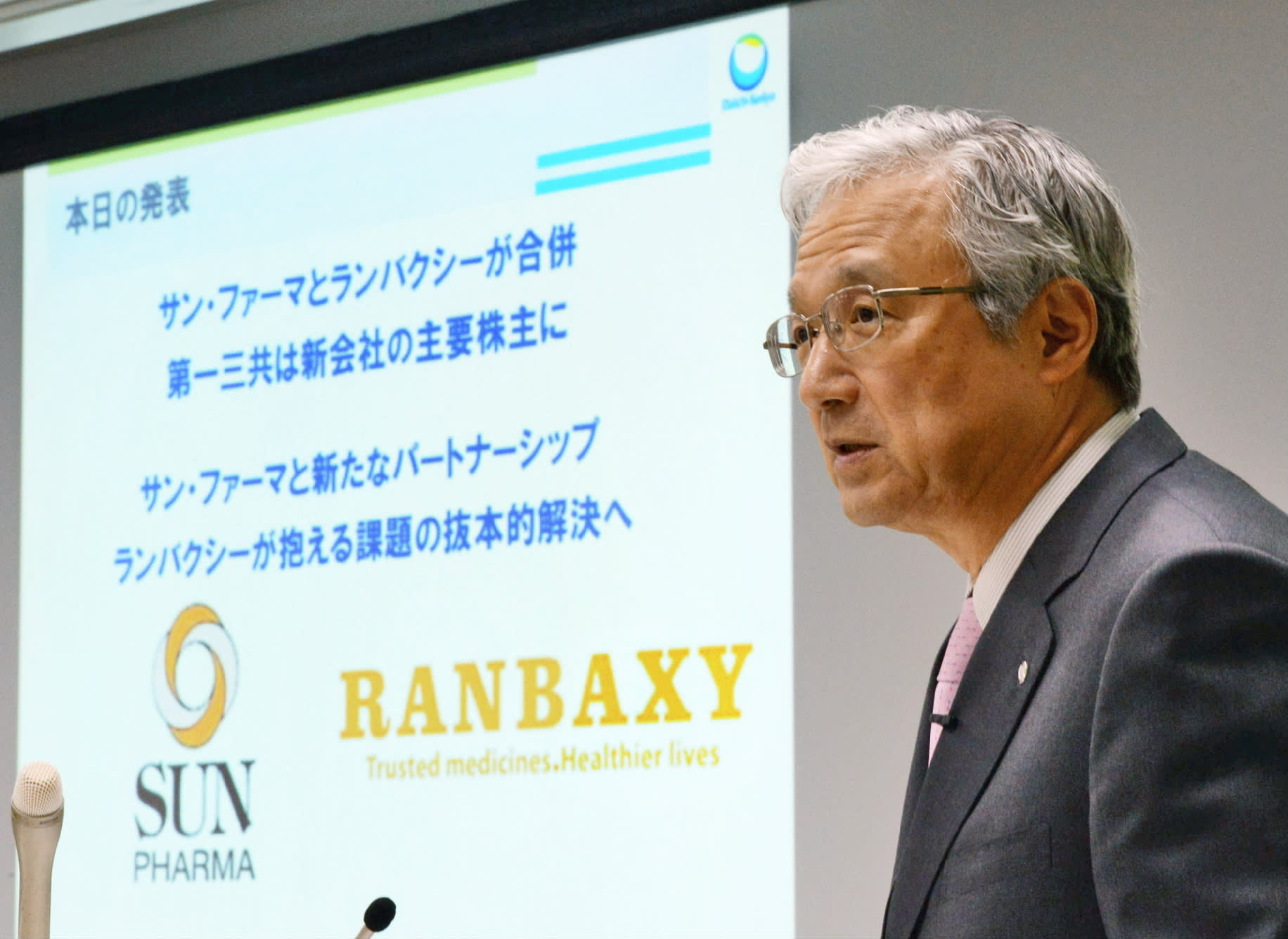 TOKYO -- Daiichi Sankyo will finally put an end to its six years with Indian subsidiary Ranbaxy Laboratories after quality-control issues turned the purchase into a major liability for the Japanese pharmaceutical company.

Ranbaxy, which was purchased for 500 billion yen in 2008 (around $5.31 billion at the time), was supposed to be a key part of Daiichi Sankyo's overseas strategy.

Indian drugmaker Sun Pharmaceutical Industries plans to absorb Ranbaxy via a stock swap by the end of the year. Daiichi Sankyo, which now holds a 63.4% interest in Ranbaxy, will own 9% of Sun Pharma.

The resulting company will be India's largest pharmaceutical manufacturer and the fifth-largest maker of generics in the world, but Daiichi Sankyo will be far less involved in its management.

"We gained a lot from the acquisition," Daiichi Sankyo President Joji Nakayama told a news conference Monday when asked whether the Ranbaxy purchase was a failure.

The company holds that the deal allowed it to accumulate know-how about the business model for generic drugs and expansion in emerging markets. But it has suffered a total of 450 billion yen ($4.31 billion) in related losses. Contributing factors include the valuation loss incurred when Ranbaxy's shares plummeted and settlements paid to the U.S. government over poor quality control at its Indian plants.

The partnership stumbled right out of the gate. Shortly after an agreement on the purchase was reached in June 2008, the U.S. Food and Drug Administration imposed a ban on all imports from two major Ranbaxy plants due to quality issues. The deal was pushed through despite opposition within Daiichi Sankyo.

Ranbaxy's woes did not end there. Daiichi Sankyo took such steps as dispatching managerial staffers to try to resolve the problems, but leadership at the site level remained lacking. The sluggish response heightened the FDA's distrust.

Reports of trouble at Ranbaxy facilities continued to pour in, ranging from flies to foreign substances adulterating tablets. Last fall, the FDA banned the import of products from Ranbaxy's Mohali factory, which produces generics, followed by a ban on the Toansa factory, which makes active pharmaceutical ingredients.

With imports to its largest market cut off, Ranbaxy was in a tight spot. It was at about this time that Daiichi Sankyo's negotiations with Sun Pharma began.

Sun Pharma managing director Dilip Shanghvi sounded out Nakayama about a deal. For Daiichi Sankyo and Ranbaxy, the timing could not have been better.

One other factor contributed to the Japanese company's decision to make the sale: a shift in its internal balance of power.

The main proponents of the Sun deal were Nakayama, finance chief Manabu Sakai, and Kazunori Hirokawa, head of research and development -- all three from the former Daiichi Pharmaceutical. Chairman Takashi Shoda, who had led the way on the Ranbaxy purchase, was from Sankyo.

It was understood throughout Daiichi Sankyo that Ranbaxy was a Sankyo issue. Pressure was building from inside and outside the company for Shoda to take responsibility for it.

The 2005 merger that formed Daiichi Sankyo was meant to put the two companies on equal footing, but a power struggle remains. The deal with Sun Pharma has given the Daiichi Pharmaceutical contingent the upper hand, but the company wasted six years before speeding up its decision-making.

"We want to work out the specifics of the business tie-up with Sun (Pharma) by the end of the year," Nakayama said, referring to Daiichi Sankyo's planned 9% stake. In a conference call in India, Shanghvi said that Sun Pharma hopes to strengthen their relationship, with the Japanese company as a major shareholder, and maintain their alliance.

The global market for generics is seen swelling to $336 billion in 2017 from $199 billion in 2012, according to U.S. research company IMS Health. Industrialized countries are seeking ways to cut medical costs, while demand is growing in emerging markets.

But generics are not like the new-drug business, which is highly profitable thanks to the protection provided by patents and local regulations. For generics, which are brought on the market just as patents run out, speed and low-cost production are the keys to success.

And it is unclear what will happen with the FDA's import ban. Shanghvi stressed that the company will focus on compliance. But Sun Pharma itself faced similar curbs last month on a factory in the state of Gujarat, making its prospects for improving quality control even less clear.

Daiichi Sankyo's share price climbed 3% on the Tokyo Stock Exchange Monday to 1,813 yen, as investors welcomed measures to stop the bleeding. "The risk of an erosion in earnings has receded," said Tomoichiro Kubota at Matsui Securities.

But dropping the linchpin of its emerging-market strategy will force the company to redo its medium- to long-term overseas strategy from scratch. The competitive environment in the pharmaceutical industry is changing rapidly, and Daiichi Sankyo's six wasted years have dealt it a heavy blow.